Do You Know How Much Your GPA Can Be Affected by Class Difficulty?

OneClass Blog
6 min read
You may know what subjects you find to be easier or more difficult. However, do you know which college classes are statistically easier or harder for all college students?To find out more about class difficulty, and how it affects grades, we surveyed hundreds of college students. Our findings reveal clear winners for the easiest and hardest classes on campus. At OneClass, we care about how well you do in your classes. Using the information below, you can better understand the impact of your courses on your grades, so you can build the best schedule. 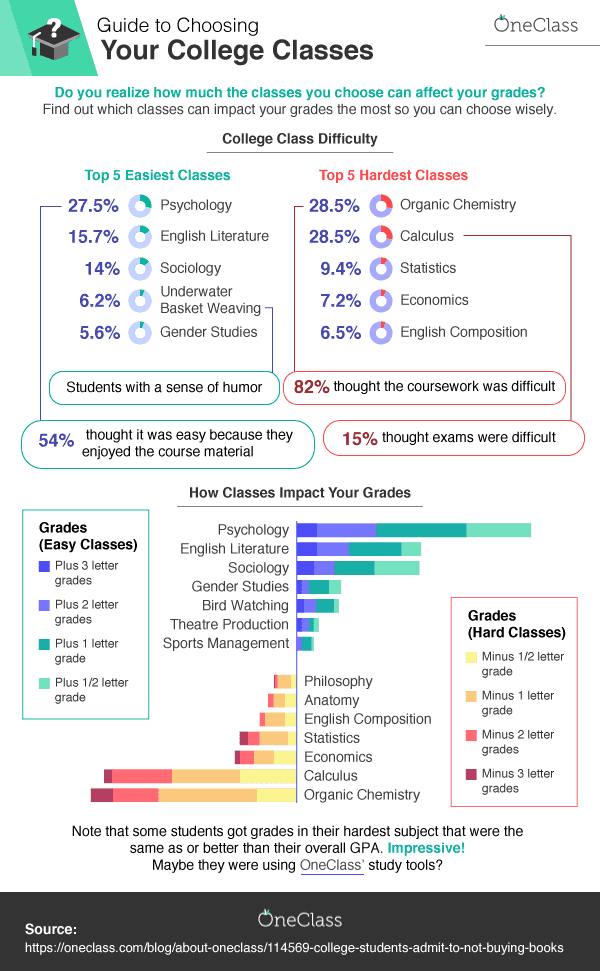 What College Classes Are the Easiest?

Share this Image on Your Site!Simply copy and paste the code below and you can share this infographic on your site:When it comes to choosing the easiest classes on campus, there’s a clear winner. More than a quarter of our surveyed students said that psychology was their easiest class. Of these students who selected psychology as their easiest class, 54 percent thought it was easy because they enjoyed the course material, and 33 percent thought the class was easy because the information that was covered in class wasn't difficult.Top 5 Easiest College Classes1. Psychology 27.5%2. English Literature 15.7%3. Sociology 14.0%4. Underwater Basket Weaving 6.2%5. Gender Studies 5.6%Following Psychology, English Literature is the second easiest class. As students at Cal State San Bernardino know, English Lit classes typically include familiar formats of readings and essay writing, making it an easy class in which to get a good grade.Notably, some students said that Underwater Basket Weaving was their easiest class. These students with a sense of humor were jokingly referring to non-academic electives that are typically less book-intensive.Beyond these top easy five courses, a diverse combination of courses ranked 6-10.Additional Easy Classes6. Bird Watching 5.2%7. Theatre Production 2.8%8. Math/Calculus 2.8%9. Sports Management 2.4%10. Biology 1.9%In this next tier of easy classes, we see math and science mentioned, as well as theatre, sports, and bird watching. Bird Watching is a fun college class that provides plenty of opportunity to get outside the classroom. Similarly, Theatre Production isn’t a book-focused class, but instead, it covers production areas of set design, sound, and technical direction.Calculus and Biology are surprising inclusions in this easiest class list. However, even though the course material is difficult for many students, students who find these classes easy are well positioned to help other students who are struggle with it.

What College Classes Are the Hardest?

What’s the Impact of Easy or Hard Classes on Your Grades?

91% of College Students Have Mental Health Struggles During COVID-19