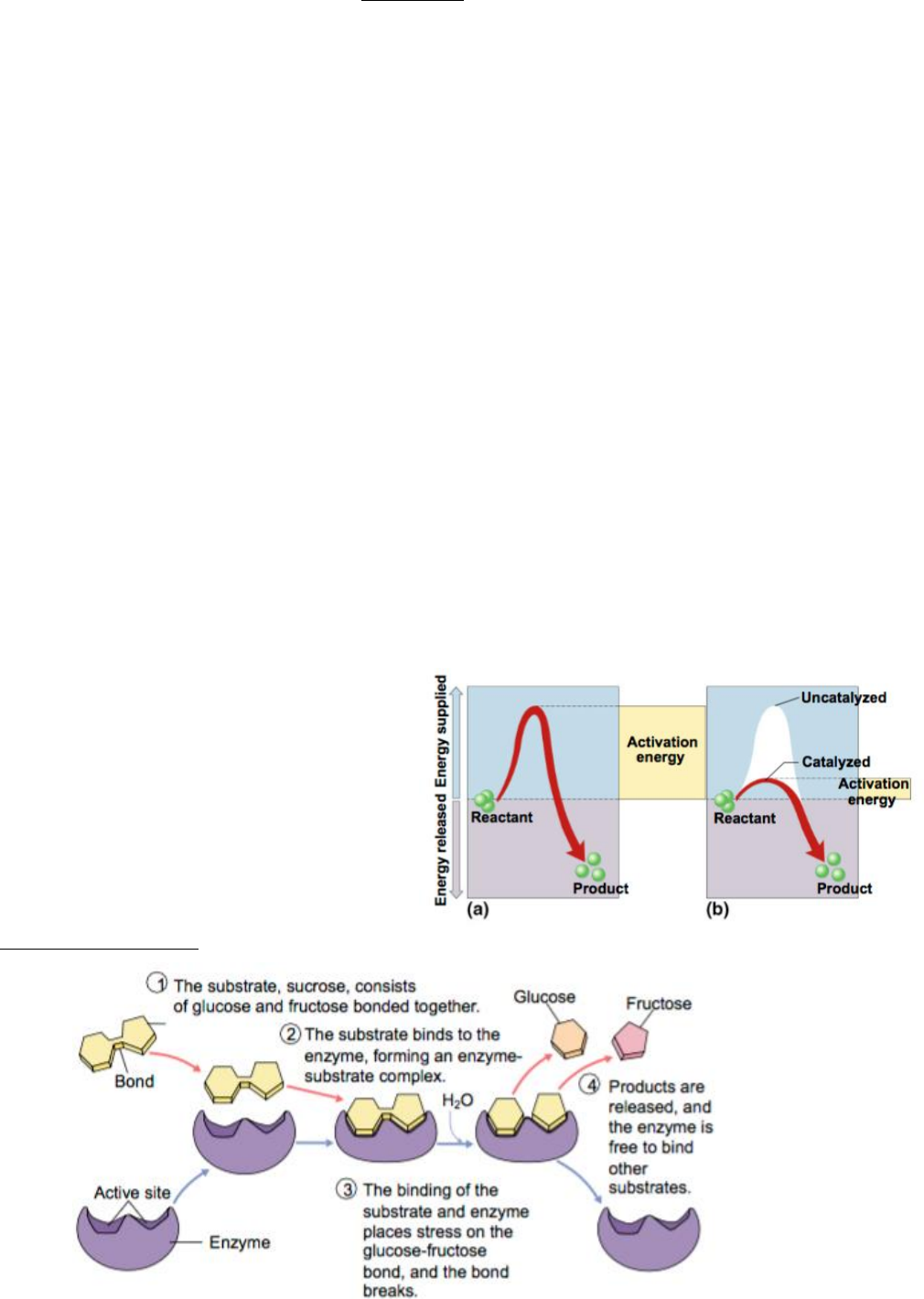 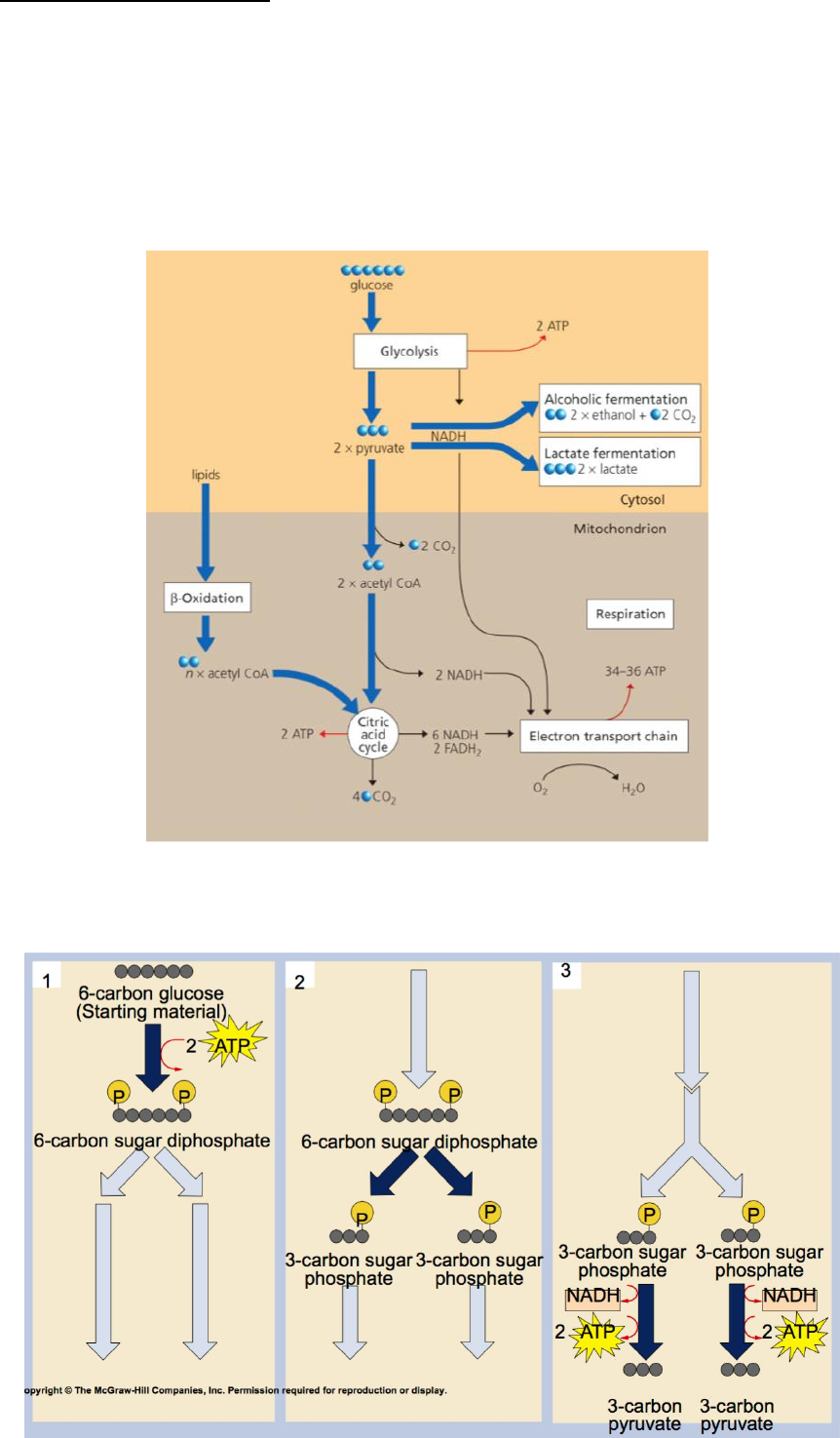 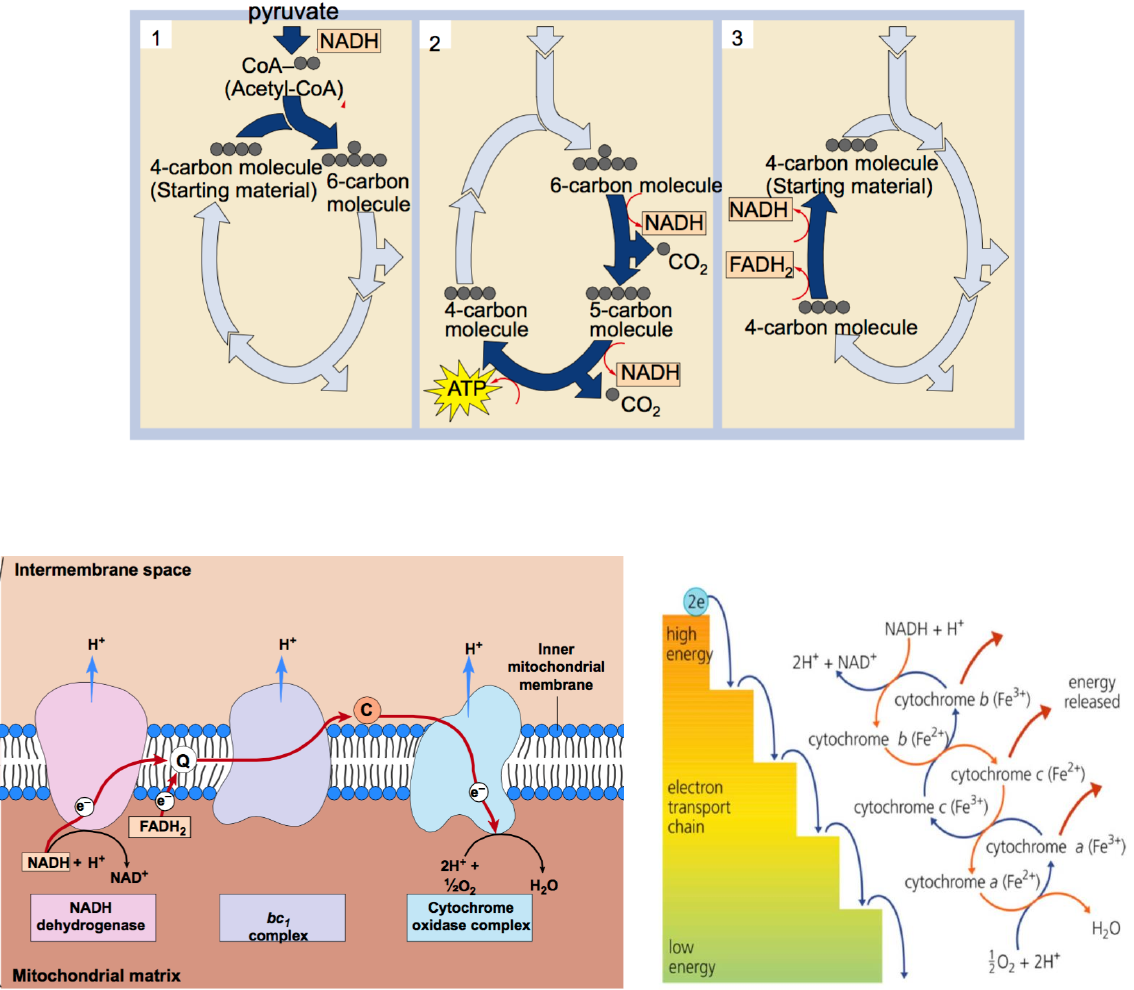 Mitochondria
• evolved from engulfed prokaryotes
• site of cellular respiration
o release energy by oxidation of sugars and lipids
o released energy stored in ATP
o cells with high level of metabolic activity have large numbers of mitochondria
• double membrane – inner is convoluted and forms cristae,
• Intermembrane space between inner and outer membranes, matrix within inner
membrane
o The interplay between what happens in intermembrane space and matrix is
important in understanding cellular respiration
Krebs cycle: completing the oxidation of fuels
• Turns twice for each glucose molecule (once for each of the 2 pyruvates)
NADH is a temporary electron carrier
Electron Transport Chain
find more resources at oneclass.com
find more resources at oneclass.com
Unlock document

Atp: energy released from an exergonic reaction is used to phosphorylate adp, which is then dephosphorylated to drive an endergonic reaction. Enzymes: enzymes are biological catalysts that lower the activation energy in reactants (substrates, enzyme- catalysed reactions require less activation energy, they proceed thousands of times faster. Glycolysis: initial processing of glucose: occurs in cytosol, net producer of energy not much though net 2 atp. Intermembrane space between inner and outer membranes, matrix within inner membrane: the interplay between what happens in intermembrane space and matrix is important in understanding cellular respiration. Krebs cycle: completing the oxidation of fuels: turns twice for each glucose molecule (once for each of the 2 pyruvates) Action of atp synthase: channel allows h+ to move freely down electrochemical gradient, movement is source of energy of atp synthesis, every 3 h+ that cross provide enough energy to form one atp.

Question 1 When energy changes from one form to another, some of the energy that can be used to do work is always lost. The loss of this energy is mostly in the form of _________.
a. heat
b. potential energy
c. kinetic energy
d. light energy
e. mechanical energy

Question 3 The first law of thermodynamics states that:
a. energy can neither be created nor destroyed.
b. the universe is increasing in entropy.
c. all living organisms must eat to derive energy.
d. energy is required to bring molecules into a cell against a concentration gradient.
e. in energy-yielding reactions, matter goes from a more-ordered to a less-ordered state.

Question 10 Which of the following is a true statement about enzymes?
a. They are made of proteins.
b. They are altered by the reactions they catalyze.
c. They increase the energy of activation of chemical reactions.
d. All of the above are true.
e. None of the above is true.

Question 11 What is the energy currency of cells?
a. ADP
b. enzymes
c. glucose
d. vitamins
e. ATP

2.During heavy exercise, lactic acid can build up in ourmuscles. Why? How does this resemble the metabolism of bacteria andyeast?

lactic acid is results from insufficient oxygen during sugarmetabolism; it is fermentation

lactic acid accumulates when we are dehydrated; bacteria andyeast use the same pathway

lactic acid is built up from carbon dioxide; bacteria and yeaststore energy in this way

3.Why must a cell keep a similar concentration of dissolvedsubstances with the fluid surrounding them?

to avoid dilution of potential energy

to avoid osmotic imbalance and rapid gain or loss of water

to maintain the correct amount of dehydration and hydrolysis

the amount of energy in a system

the amount of disorganization

the amount of organization

5.Burning a log is the reverse reaction found in photosynthesis.What products would be formed in burning a log?

6.The main reason that cellular respiration needs to occur stepby step instead of a single, big reaction is

too much energy would be released for the cell to harness

cells don't have many mitochondria.

7.Enzymes are catalysts because they operate to:

8.When ATP powers a reaction it becomes ADP. The ADP

can reform ATP by an exergonic reaction

is a waste product for lysosomal breakdown

can reform ATP by an endergonic reaction

can reform ATP by an oxidation reaction

can reform ATP by an equilibrium reaction

9.The energy source that drives photosynthesis is

10. What is the process by which enzymes regulate their ownactivity?

12.How is water used in photosynthesis?

as a substrate for ATP synthase

as an electron donor

to combine with ADP forming ATP

as an electron acceptor

they do not require light

they can only occur at night

they generate excess sugar and the leaves turn brown

14.What is the difference between potential and kineticenergy?

potential is stored, kinetic is being used

potential is being used, kinetic is ready to be used

potential is negative, kinetic is positive

15.The products of cellular respiration are

16.All of the following are correct about energy except:

The biological world gets its energy from the sun.

A boulder perched on a hill has kinetic energy.

Energy is defined as the ability to do work.

All forms of energy can be converted to heat.

17.What is needed for the end product of glycolysis, pyruvate,to enter the citric acid cycle?

18.The enzyme that forms a transmembrane channel in mitochondriaand phosphorylates ADP

19.Fermentation is most common in

20.During adsorption of sunlight by photosystems, H+ ions aregenerated. Where do they come from? What are they used for?

from the breakdown of sugar; they help form water

does not use oxygen

not dependent on chlorophyll

a process that produces glucose and oxygen

a process that produces water and carbon dioxide

23.Breakdown of glucose generates many ATP molecules, each ofwhich can be used independently. Why is ATP ideally suited to powerbiological reactions?

ATP has many hydrogen bonds

ATP has enough energy to power one biological reaction

24.Objects that are not actively moving but have the capacity todo so are said to possess:

25.The first stage of cellular respiration, called ___________,takes place in the cytoplasm of the cell and needs no oxygen.

utilizes proteins to move molecules across a membrane

moves molecules against a concentration gradient

does not require energy

cannot occur without a membrane present

27.What is the name of the molecule on which an enzymeworks?

29.How does chlorophyll function in photosynthesis?

by absorbing the sun's energy

30.Objects that are moving are said to possess:

31.The respiration pathway that evolved first is probably

32.The energy source for the process of photosynthesis is

33.Burning wood generates heat and light. What type of reactionis this?

34.What is meant by a âcoupled reactionâ in terms of energy?

many poymers are built simultaneously

energy released by one reactions powers another reaction

some reactions occur in the same organelle

35.The First Law of Thermodynamics states:

energy is constantly being created by entropy events

energy can be changed from one form to another, but cannot becreated or destroyed

energy can be destroyed while it is producing entropy

36.How do we dispose of the carbon derived from the glucose thatis metabolized during respiration?

it is broken down in lysosomes

37.Both plant and animal cells have mitochondria because theyboth

38.What is Activation Energy?

the energy needed to initiate a reaction

the energy that transports water into cells

39.If you put a plant in a chamber and shine a light on it

oxygen will decrease and carbon dioxide will increase

oxygen will increase and carbon dioxide will decrease

oxygen and carbon dioxide will increase

oxygen and carbon dioxide will decrease

40.What are the inputs and the output molecules for the overallphotosynthetic process?

41.What kind of reaction is photosynthesis?

42.In the process of glycolysis, glucose is cleaved into a pairof three-carbon molecules called

Both order and disorder are correct

Both complexity and disorder are correct

45.The organelle that carries out photosynthesis in plants isthe

46.The energy to power the Calvin cycle comes from

the light reactions of photosynthesis

47.Which of the following can be broken down into intermediateproducts that enter cellular respiration?

48.When cellular product levels get too high, the responsibleenzyme is inhibited. This is an example of

49.How is respiration the opposite of photosynthesis?

50.The molecule that absorbs sunlight for photosynthesis is