Unit 11: Young Offenders
Outline of Sections
• Current and Historical Treatment of Young Offenders in Canada
• Assessment of Young Offenders
• Theories of Youthful Offending
• Risk and Proctective Factors
• Intervention and Treatment Strategies
Current and Historical Treatment of Young Offenders in Canada
Early Young Offender Legislation
• 17/18th Centuries
o No formal rules regarding treatment of adolescents
▪ Charges, sentencing and incarceration were as with adults
• 1908: The Juvenile Delinquents’ Act (JDA)
o Applied to children between the ages of 7-16 (18 in some jurisdictions)
o Separate, somewhat more informal, court system was established
o Sentencing options were expanded to include less formal options
o Parents were encouraged to be a part of the proceedings
Young Offenders Act (YOA)
• Replaced the JDA in 1984
• Represented a shift in how adolescent offenders were perceived
o While younger, were still viewed as an equal treat to society
o Were thus
▪ Afforded all right stated in the Charter
▪ To be held fully responsible for their actions
• Youth falling under the act were between the ages of 12-18
o Under 12, were handled through child and family services
• Some differences between adults and youth were still recognized (eg cognitive
development)
• These differences were addressed through differential levels of accountability, and
differential consequences for their actions
• Diversion was possible: to have the adolescent undergo educational or community
service instead of formal prosecution (for certain crimes)
Unlock document 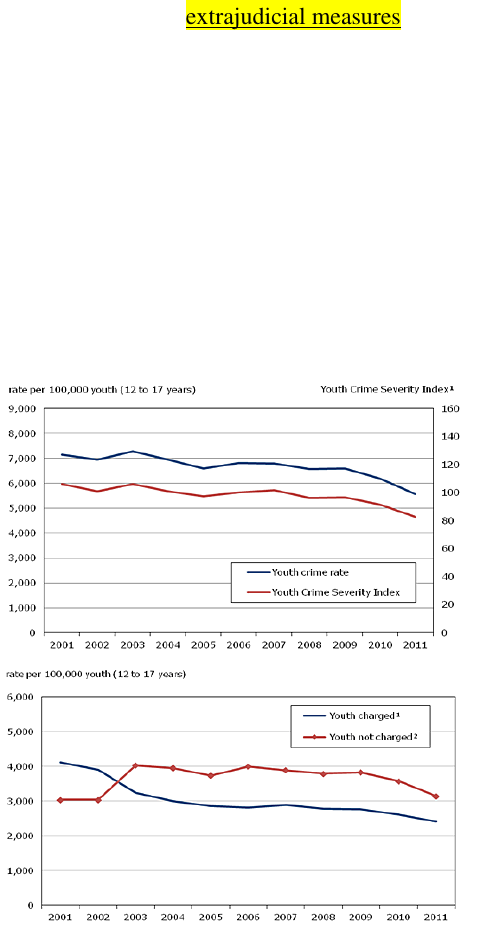 Youth Criminal Justice Act (YCJA)
• Replaced the YOA in 2003, and remains active today
• The three main objective of the YCJA are:
o To prevent youth crime
o To provide meaningful consequence and encourage responsibility of behavior
o To improve rehabilitation and reintegration of youth into the community
• There is a push for extrajudicial measures
o Measures taken to keep youth out of court/custody if possible
• Youth must remain anonymous, except under special circumstances
• Sentencing options have increased
• Transfer to adult court has been eliminated
• However, adult charges can still be requested, and applied at times
• Victims are given the opportunity to participate in the process
Youth Crime Rates
• Youth crime has been decreasing since 2001 gradually
• Some people people that the JCYA is part of the reason why it has been decreasing
Unlock document