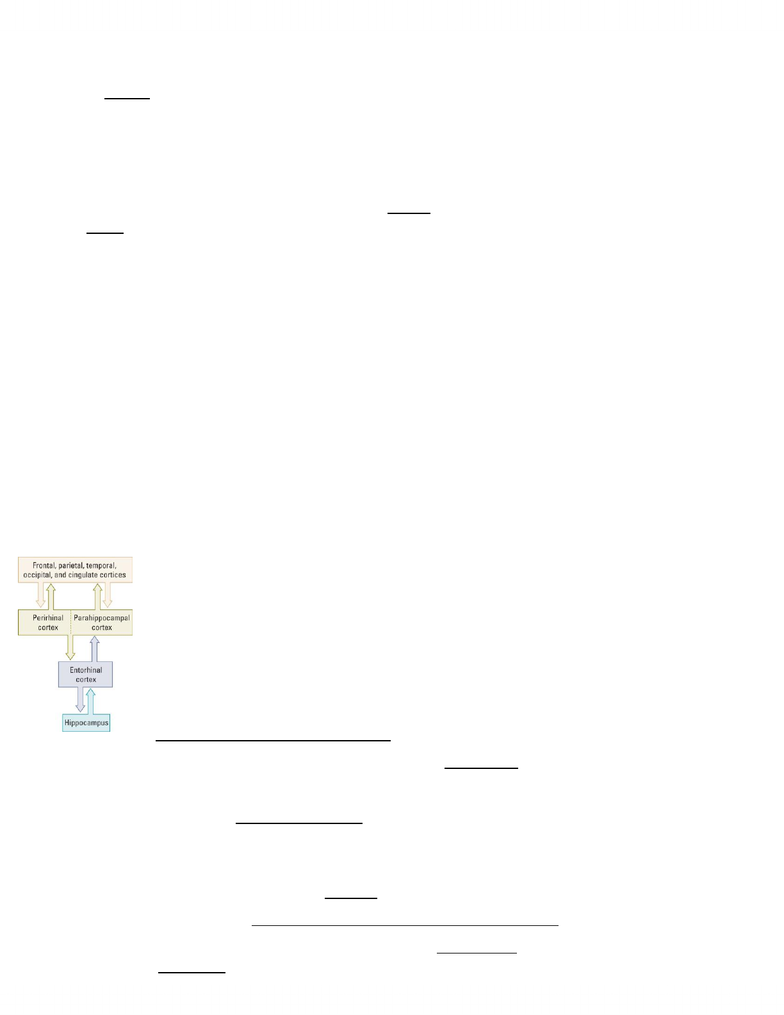 Lecture 4b [final]
The Frontal Lobe and Short-Term Memory
• All sensory systems project to the frontal lobes
– There are a lot of inputs going into the frontal lobe
but little coming out of lobe. Location of working
memory.
• During tasks in which monkeys must keep information in
short-term memory over a delay, certain cells in the frontal
cortex will fire throughout the delay
– Animals that have not learned the task show no
such cell activity
– Delayed response task- same location as cue
– Delayed-alternation task: diff location than cue
– Delayed-matching-to-sample task: same color As cue
• If we do single cell recording, where we’re actually measuring
the firing of the cells in the frontal lobe what happens is that
we get very specific cells that fire throughout the delayed period. It is almost like these cells are saying “it is in
the left, it is in the left, it is in the left or it’s the green one it’s the green on it’s the green one” … animals that
have not learned this task show no cell activity when presented with it initially.
Reciprocal Connections for Explicit Memory
• The neocortex projects to the entorhinal cortex, which projects back to the neocortex
– Benefits:
• Signals from the medial temporal regions back to the cortical sensory regions keep the sensory
experience alive in the brain: the idea that the neural record outlasts the experience. So you
may walk by someone “hello” you have their face and their name, that person leaves but your
frontal lobe and cortical regions are keeping that person alive in your memory.
• Pathway back to the neocortex means it is kept apprised of the information being processed in
medial temporal regions
Korsakoff’s Syndrome (explicit memory)
• Indirect cause of chronic alcohol consumption; direct cause of malnutrition
– Alcohol is not what is killing off the brain cells, it is malnutrition
– Poor diet: Lack of vitamin B1 (thiamine)
• Without a good varied diet, you will lack critical vitamins like vitamin B1, we require it for
normal neuronal processing, we don’t make it in our body.
– Chronic alcoholism compromises thiamine absorption from GI tract, impairs thiamine storage
• May also result from dietary deficiencies, prolonged vomiting, or eating disorders
• Results in permanent loss of ability to learn new information (anterograde amnesia) and retrieve old
information (retrograde amnesia)
remember diagram
Unlock document 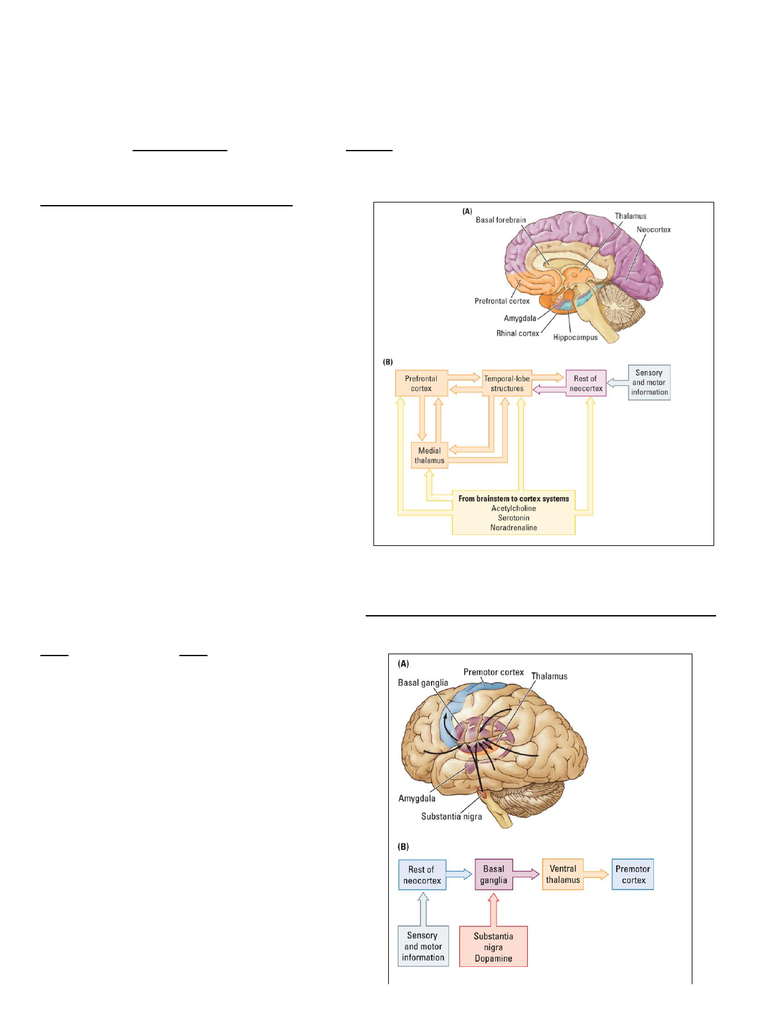 – Show a great degree of confabulation – lack the awareness that they actually have a memory deficit.
They aren’t meaning to lie, they don’t know they are lying because they actually don’t remember what
they did the night before for example but will say something habituary and when someone says but no I
saw you here at the store, they’ll further fabricate the story to compensate for not remembering but not
knowing that they are lying.
– Explicit memory disturbances (some implicit though)
– Show damage to the mammillary body, and also to the medial thalamus and frontal lobes
Proposed Neural Circuit for Explicit Memory **exam**
• Mishkin and colleagues (1982, 2000)
– Temporal Lobe Structures
• mammillary bodies are part of
temporal lobe. 2 weeks from now,
I will not remember what I wore
yesterday and what my daughter
had for breakfast.
– Frontal Lobe Structures (short term and
ordering
– Medial Thalamus
– Basal Forebrain-Activating Systems
**Circuitry: we get info via our senses, it is projected via
the neocortex to these temporal lobe structures. It is
then passed onto prefrontal cortex and medial thalamus.
Basal forebrain is critical because it keeps the activity
in forebrain high. So those basal forebrain neurons that secrete things like aceylcholine, serotonin… they’re sending
projections up to the forebrain ad saying “pay attention, pay attention, pay attention” .. the frontal cortex is critical for
short term (explicit) memory and order of explicit events. So not just keeping things in your mind, but also the order.
Finally, temporal lobe is more critical for long term memory, but we have explicit memory in both frontal and temporal.
^^^^***** exam ***** ^^^^
Proposed Circuit for Implicit Memory
• Mishkin and colleagues (1982, 1997)
– Basal Ganglia
– Ventral Thalamus
– Substantia Nigra
– Premotor Cortex
Circuitry: we get info once again from our senses. Goes to
neocortex once again, but then goes to basal ganglia.
the neurons use dopamine as their signaling molecule and
those are found in the substantia nigra. So the basal ganglia
is kept active by the dopamine neurgic cell of the substantia
nigra, in order to actually make those implicit memories
Unlock document 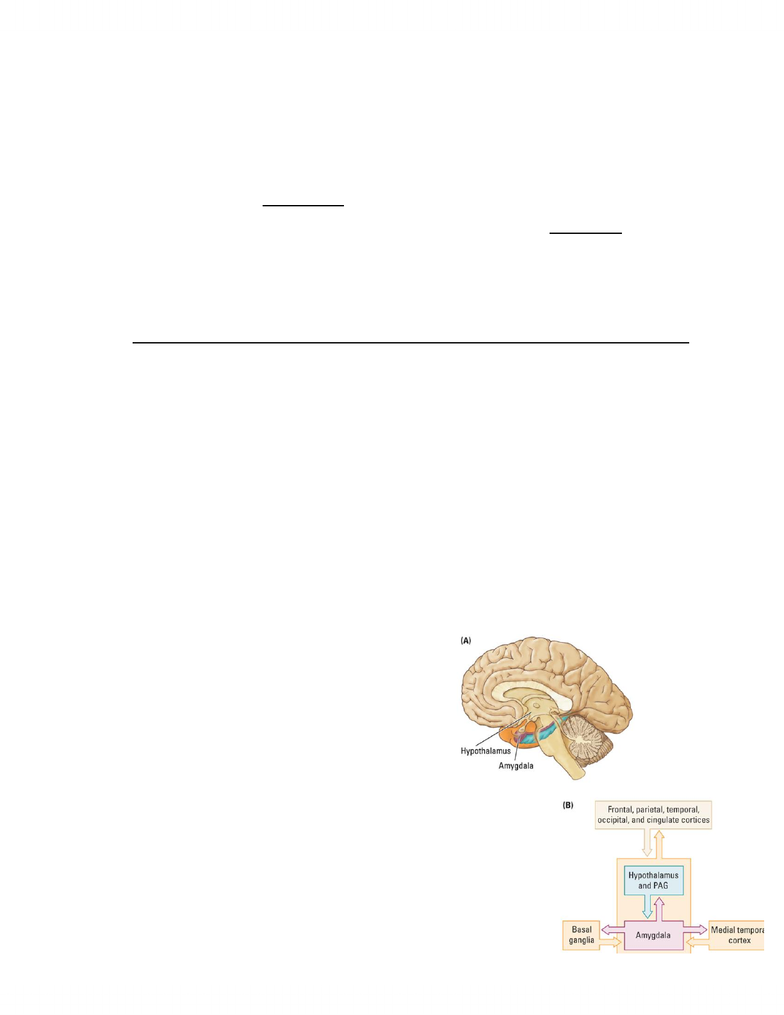 expressed, they need to be sent to the Ventral thalamus. SO REMEMBER medial is explicit whereas ventral is implicit. It
is then sent to the premotor cortex which is essential in acting out motor programs, implicit is memory for HOW. How
do you ride a bike, how do you dial a phone. So it makes sense that we are going to involve those motor regions.
Another major difference in the two, is that with explicit we have a lot of connections going ‘back’ to temporal lobe
whereas implicit does not.
• Unconscious nature of implicit memory
– Mishkin believes that implicit memories are unconscious because the connections between the basal
ganglia and cortex are unidirectional
• Basal ganglia receives information from the cortex, but does not project back to the cortex
• For memories to be conscious, there must be feedback to the cortex
• Medial temporal lobe projects back to the cortex so explicit memories are therefore conscious
• Why are implicit memories unconscious? **exam**
– Because the neocortex sends into the basal ganglia but does not receive information back.****
Neural Circuit for Emotional Memories
- Memory for the affective properties of stimuli or events
- Could be implicit or explicit
- Amygdala is critical for emotional memory
• Damage to the amygdala abolishes emotional memory but has little effect on implicit or
explicit memory and keeps them intact
• So you may have the memory of your 5th birthday but you do not hqave the emotion
that is tied to it
• What else happens when you damage the amygdala?
• Kluver-Bucy syndrome
• When you get the hypersexuality, hyper aroulity, they cant learn any
fear behaviours because all that emotional circuitry has been gone
– Circuitry:
- Amygdala
- Medial temporal cortex (explicit memory)
- Brainstem (autonomic arousal)
- Hypothalamus (hormones)
- Periaqueductal Gray Matter (PAG) (pain)
- Basal Ganglia (implicit memory)
Step by step: we do have huge influence of the amygdala, but it has a
number of subnuclei to it that you DON’T need to know specifics, but
each have different projections out of the amygdala to other parts of
the brain. So ex: we have connections to the medial temporal cortex
and this makes sense because we are feeding the information to those
areas of the brain that are important for laying down long term
memories. We also have connectioons to the brain stem, important
for autonomic arousal. So when we activate our brain stem we are saying
dialate those pupils raise the heart rate, all those aspects in fear response.
Next is connection to the hypothalamus, it is in releasing hormones (cortisol,
Unlock document