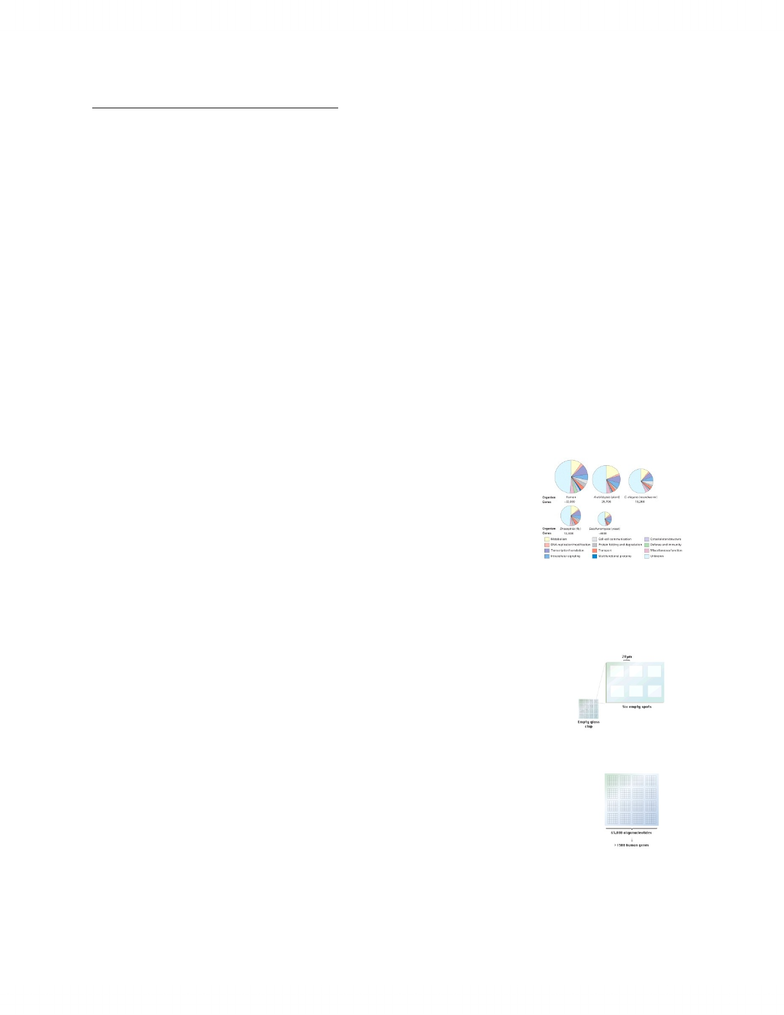 Naveen Sooknanan McGill Fall 2011
Functional Genomics and Proteomics:
With the new sequencing technologies available which are capable of sequencing entire genomes
in days, even hours, there needs to be technology available to make sense of it all
•How do these letters (nucleotides) form words (mRNA), paragraphs (proteins) and finally
form the whole novel (us)
Genomics allows us to do this, by studying the genome as a whole. Genomics has four particular
uses:
•Finding out gene structure
•Finding out gene function
•Looking for evolutionary relationships
oSuch as where divergences take place
•It is used as a predictive tool for new genes
oIt gives us the ability to compare a completely new gene against a database to find a
gene of similar structure
oAs example of this is with Rpd3 looking like a histone deacetylase from another
organism, allowing us to determine its function
Analysis of full genomes has shown us how little we actually know about genes and gene function
•We have notices that the same basic cellular took kit is shared
by almost all organisms
oThese are the genes that produce materials needed for
basic functions such as metabolism, transcription,
splicing, etc.
•Metabolic genes make up a large portion of the total number of
genes
oTranscription and translation genes also make up a significant number of genes
•However, the vast majority of genes within the genome are of unknown function
oAnd this is not just in humans, it’s in even the most basic eukaryotes like yeast
The expression of thousands of genes can all be analyzed at once using a
technology known as microarray analysis
•This procedure has been around for 15-25 years, and involves
spotting out every gene from a genome onto tiny little wells in a
glass chip known as a microarray
oThese genes can be made from oligonucleotides or cDNA
•These oligonucleotides can be fluorescently labelled so that their
activity can be monitored by a microscope
•Genes expressed at the around the same time can have similar or
complementary functions which are indicative of the cell’s overall
function
oI.e. stages of development vs. adulthood
•These oligonucleotides are designed to that the can only hybridize with one specific cDNA
molecule, which allows for specificity
1
Unlock document 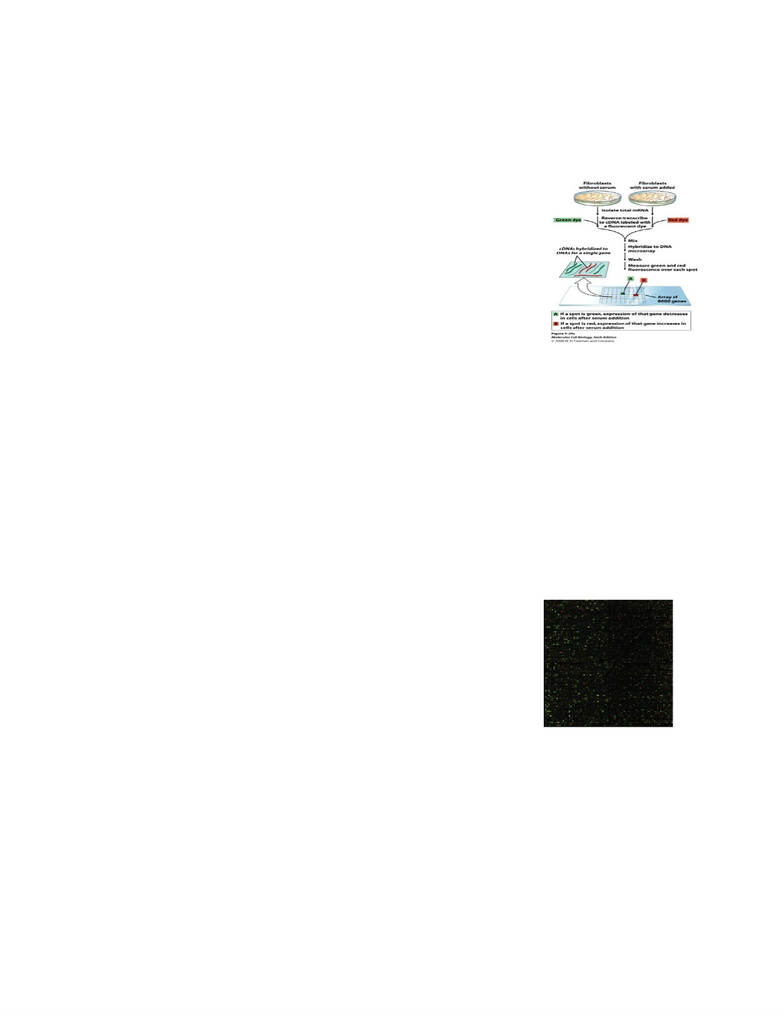 Naveen Sooknanan McGill Fall 2011
•RNA samples of different origin can be monitored on the same microarray if the two
samples are labelled with different fluorescent dyes
The microarray experiment can be set up to record results from the same genome subject to
different living conditions
•One sample, left on a plate without serum, cannot divide,
meaning they are quiescent
•The other sample is allowed to grow in the presence of serum and
therefore has different gene activity than the quiescent cells
•mRNAs are isolated from each of these samples (using any
methods we have studied earlier)
•They are then reverse-transcribed into cDNA which are labelled
with fluorescent dyes, a different dye for each sample
oThe process is the same as making a cDNA library
•These samples are then loaded onto a microarray, each well containing different
oligonucleotides which are specific to one cDNA from the sample
oEach sample is used to hybridize a full genome microarray independently and the
changes are recorded
oTherefore, the samples will form hybrids with the oligonucleotides or cDNAs in the
wells
•These samples will show differential hybridizations because of different amounts of
mRNA produced by the two types of cells (quiescent vs. actively dividing)
•Thus, two microarray readouts are produced, which can be superimposed to compare gene
activity
Take this hybridized microarray: the colors have been assigned so that green means the gene is
expressed more in condition A, red means higher expression in condition B, and yellow means
unchanged expression
•Upon completion of the hybridization, a special instrument, a
reader, can detect these fluorescent marks emitted by tagged
cDNAs
•Since the oligonucleotides are in excess, they give rough,
inaccurate measure for the abundance of mRNA in a sample
•The more mRNA produced by the cell, the more labelled cDNA
will be made, and the higher the level of fluorescence detected
by the machine
oEach dot on the microarray sample is the activity of a particular gene. You will be
able to tell which gene it is because you have recorded which oligonucleotide was
placed in this well
•In this example, green light means this gene was downregulated during cell division, red
means it was unregulated, and yellow means it was unchanged
•This gives an idea of the overall gene expression during cell division
These microarray results can be clustered together in order to extract important information:
•These microarrays are placed so that gene expression can be analyzed over a period of time
2
Unlock document 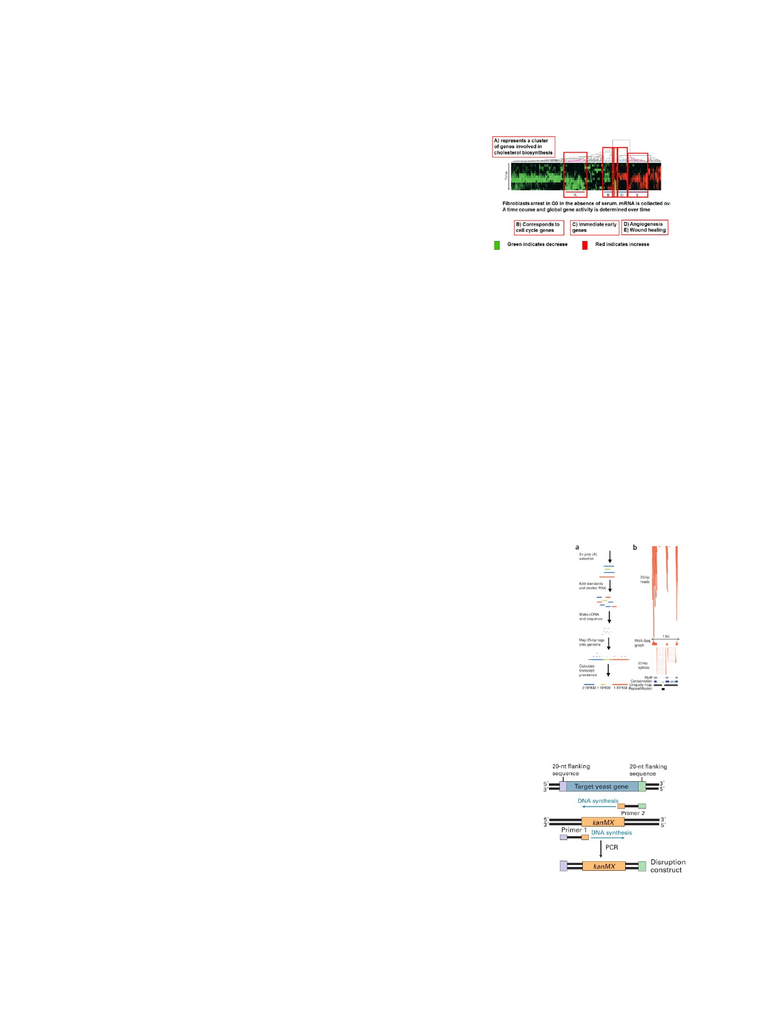 Naveen Sooknanan McGill Fall 2011
oThis can be used to figure out which genes are regulated during certain cellular
activities
•For example, This cluster has 5 clusters representing 5
different cell activities
oCluster A represents genes involved in
cholesterol biosynthesis
oB corresponds to cell cycle genes
oC represents immediate cluster genes
oD represents genes for angiogenesis
oE represents genes for wound healing
•For all of these clusters, fibroblast samples were grown in the absence of serum, mRNA
was collected over a period of time, and a gene activity over time was determined through
microarray analysis
•For example, clusters A and C are downregulated, because the turn green, later in time,
while clusters D and E are upregulated later on
oCluster B is downregulated early then is upregulated later
•If you have a sample of an unknown gene, you can do a microarray analysis and see where
it falls in one of these clusters
oBy doing this, you can assign the gene a function (though it may not be true, but it’s
a fair starting point)
•This can also be used to monitor the activity of cancerous cells, to see what changes in
gene activity in the cells of a cancerous patient
The RNA-seq procedure is a process entirely dependent on sequencing, and is becoming the most
predominant method of analyzing gene expression
•RNA is placed with 2 Poly(A) sections, then standards are added and
the RNA is shattered into tiny fragments
•cDNA is made from these fragments, which are representative of the
quantities present in the cell
oThese cDNAs are all roughly the same size
•These fragments are then mapped back to the genome to calculate
transcript prevalence
oThis gives an accurate representation of gene expression in the
sample
oYeast is limited in this procedure because it is unicellular
One of the best ways to determine the functions of a particular gene is
to remove it from an organism, and see what kind of phenotype it
causes. Doing this on the scale of an entire genome is known as
functional genomics
•In baker’s yeast, genes can be replaced or targeted in a strategy
based on homologous recombination (HR)
•The target yeast gene is surrounded by two flaking regions, each
at least 20 nucleotides in length
3
Unlock document