1a) Faraday discovered that a current is induced in a coil

1c) In the conducting rail discussed in section 25.2 (where the rail is moving at constant speed), what can you say about the power input due to the person pulling on the rail and the power dissipated in the resistance?

1d) The electric generator as shown in the reading generates electricity by:

1e) The magnetic flux through a loop:

1g) A stationary coil experiences a doubling of its magnetic field (no change in direction of the field) in a time T and has a given induced EMF. If the same change were to have happened in half the time (T/2), the induced EMF would have been:

Faraday's law describes how electric fields and electromotive forces are generated from changing magnetic fields. This problem is a prototypical example in which an increasing magnetic flux generates a finite line integral of the electric field around a closed loop that surrounds the changing magnetic flux through a surface bounded by that loop. A cylindrical iron rod with cross-sectional area is oriented with its symmetry axis coincident with the z axis of a cylindrical coordinate system as shown. It has a uniform magnetic field inside that varies according to  . 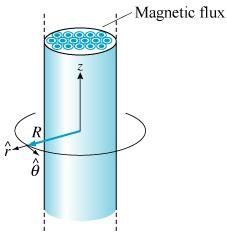 1. Find  , the electromotive force (EMF) around a loop that is at distance R from the z axis, where R is restricted to the region outside the iron rod as shown. Take the direction shown in the figure as positive

2. Due to the cylindrical symmetry of this problem, the induced electric field   can depend only on the distance R from the z axis, where R is restricted to the region outside the iron rod. Find this field

azurefish181
You are given a circular conducting wire loop with one
end cut out and connected to a resistor, R, as shown in
the figure to the right. A metal rod of length l is set at an
initial angle ?0 from the resistor, and then rotates
clockwise about the center of the wire loop with angular
frequency through a uniform magnetic field B
directed into the page. The metal rod stays in contact
with the wire loop at all points of its motion. Unless
otherwise requested, all answers should be in simplified
algebraic form using the above given variables.

(a) Given that the initial angle ?0 is in radians, what is theinitial area of the closed circuit âwedgeâdefined by ?0? (2pts.)
(b) What is the magnetic flux through this initial âwedgeâ areadefined by ?0? (2 pts.)
Starting at time t=0 at position ?0, the rod is rotated clockwisewith angular velocity as shown in
the figure. Given this configuration, answer questions (c)-(g)below:
(c) What is the direction of the induced magnetic field inside theâwedgeâ? (2 pts)
(d) What is the direction of the induced current around the closedcircuit? (2 pts)
(e) What is the magnitude of the induced emf, E in the circuit? (4pts)
(f) What is the magnitude of the induced current in the circuit? (4pts)
(g) What is the power used by the resistor? (4 pts)
(h) The metal rod is now rotated in the opposite direction, i.e. inthe counter-clockwise direction. Given this information, completethe chart below as to what quantities you just calculated change,and what ones do not change. You do not have to show work, justgive the result. No partial credit will be given here. (5pts)


The setup is now modified slightly so that the circular conductingwire loop no longer has a small
section removed as shown in both figures below. This modificationwould allow the metal rod to
continuously rotate on the circular wire loop as clearlyillustrated in the 3D side view. The metal rod
is rotated clockwise, as in the initial part of the problem.


(i) Given this information, complete the chart below. You do nothave to show work, just give the
result. No partial credit will be given here. (5 pts)