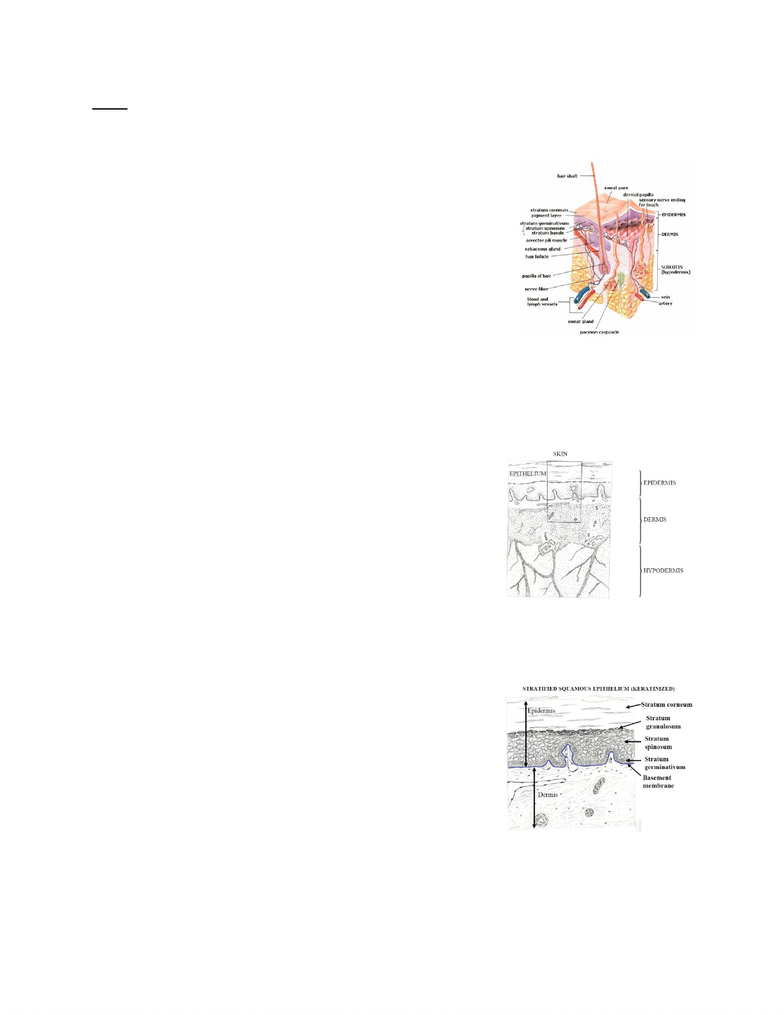 Naveen Sooknanan McGill Fall 2011
1
Skin:
The skin is made of 3 layers: the epidermis (packed cells), the dermis (fibers) and the
hypodermis (fat cells and reticular fiber). The skin has 7 functions:
 Protection: blocks entry of foreign material and also resist
penetration and abrasion
 Containments: prevents loss of body fluid
 Thermoregulation: Controls the transfer of heat across the
body’s surface, i.e. it regulates the body temperature
through sweat, vasodilation, etc.
 Immunological defence: physical barrier against pathogens
 Sensory abilities: receptors for pains, heat, etc. Also why
your hair stands up sometimes
 Communication: releases visual (e.g. blushing) and
pheremonal signals
 Appendages: hair, nails, sebaceous glands, sweat glands
The epidermis is made of a stratified squamous keratinized epithelium. We will discuss exactly
what this means in a bit, but there are 4 main layers to the epidermis, going from the bottom up:
 The basements membrane: all epithelium lies on a
basements membrane, which in this case separates the
epidermis from the dermis
o The basement membrane is invisible under LM
everywhere except for the hair follicles and the
respiratory tract, where they are enflamed
 Stratum germinativum (or stratum basili) is right on top
of the basement membrane and is a single layer of
columnar cells
o These are the stem cells of the epithelium, and
will differentiate into the layers above it
 The stratum spinosum are spiny, polygonal cells which are part of intracellular junctions
o As the stem cells continue to grow, these cells begin to grow protein granules and
are pushed up into the next layer, the stratum
granulosom
 The stratum granulosom is made up of flat cells filled
with protein granules
o These cells begins to release their proteins
granules at this layer
o The stratum spinosum and granulosom attach
laterally
 The stratum corneum Is made up of 10-15 layers of flat,
dead cells that came from the stratum germinativum
o The nuclei in these cells has been squeezed out of the cell, and therefore the cell
dies
Unlock document 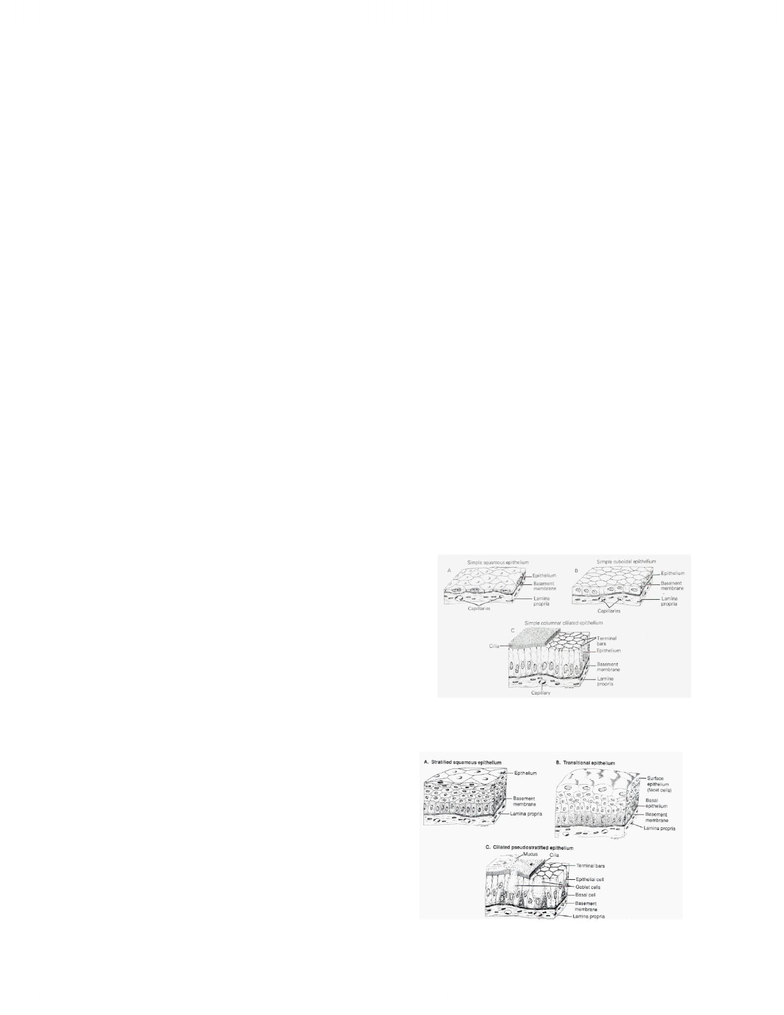 Naveen Sooknanan McGill Fall 2011
2
Below all of this is the dermis, which is made up of more fibrous elements called connective
tissue.
 This connective tissue contains collagen fibers, as well as others such as extracellular
membrane proteins
 Invaginations of the dermis begin to push into the epidermis; these are called papillae
o Sometimes, because of plane of sections, these papillae will appear detached from
the dermis, but they always remains attached
The layer below this is the hypodermis, which contains mainly fat cells
 Because of the fixation procedure, these fat cells cannot be seen because they were
removed when the sample was dehydrated with ethanol
Characteristic of all epithelium:
 The cells are squished together, meaning there is little extracellular space
 The cells are strongly attached due to intercellular junctions
 They line the body’s surface and cavities
 They have specializations; they can be used for absorption, secretion, sensation and
contractility
 The cells are polarized (doesn’t mean charged); they have top and bottom which are
different
 All epithelial tissue rests on a basement membrane (BM
o Sometimes the BM will also be called basal lamina
Epithelial tissue can either be covering epithelia or glandular epithelia. For now, we will only
look at covering epithelia, we will do glandular later
 A simple epithelium has only one layer of
cells, and can be further classified by the
shape of the cells
o Simple cuboidal (cube shaped)
 I.e. sebaceous gland
o Simple columnar (tall, thin cells)
 I.e. intestines
o Simple squamous (flat cells)
 I.e. respiratory tract, capillaries
 A stratified epithelium has many layers of cells, and its shape is determined by the
outermost layer of cells
o Stratifies squamous (either
keratinized, like the skin, or non-
keratinized) has flat cells on the top
layer (like the skin)
o Transitional epithelium, in which
the top layer changes shape
 This will be seen in the
kidney and urinary bladder
 The outermost layer is made
of 2-5 layers of facet cells,
Unlock document 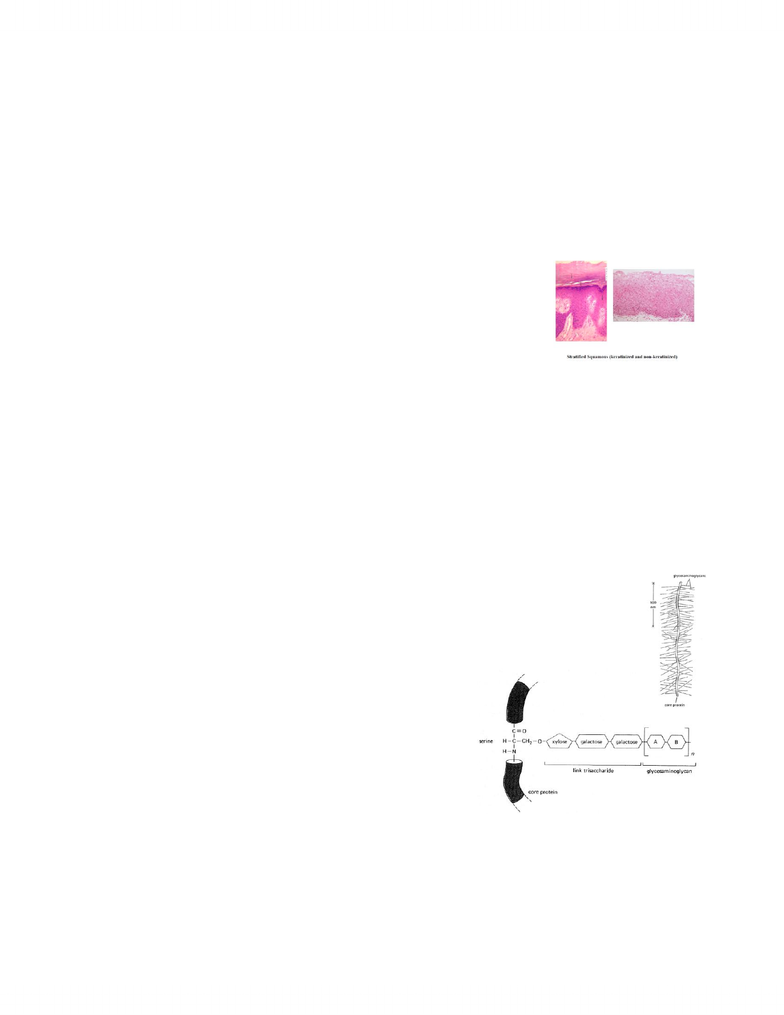 Naveen Sooknanan McGill Fall 2011
3
which can change their shape
 The epithelium can also be pseudostratified columnar, meaning it has the appearance of
multiple layers, but in reality there is only one layer of columnar cells
o An example of this is in the trachea
o The nuclei appeared scatter, until simple columnar epithelium where they are all
lined up, but there is still only one layer of cells
 Epithelium can also be ciliated (i.e. contain cilia, which arte little cells, at the outermost
layer) or have a brush border, which are microvilli (hairs just like cilia, but much smaller)
o These help increase surface area of the epithelium, useful
in absorption
As we have seen in the epidermis, keratinized epithelium has a layer of
dead cells on top, which are full of keratin granules. We will talk about
these more later on
 Non-keratinized epithelium does not have any keratin containing
cells, and therefore there is no stratum corneum layer
The BM is made up of proteoglycans, glycoproteins, collagen, and a layer of reticular fibers
which underlies it. The basement membrane has 5 main functions:
 Structural attachment: of epithelial tissue to connective tissue (CT)
 Compartmentalization: separates epithelial cells from muscle cells
 Filtrations: Helps move molecules using their ionic charge, important in the kidney
 Helps establish polarity of the epithelial cells
 Tissue scaffolding: acts as a scaffold during regeneration when the epithelium is damaged
A proteoglycan is made up of 50% sugars, 50% proteins. It consist of a core protein and several
branches
 The core protein is attached to many glycosaminoglycan (GAGs)
o An example of a GAG is heparan sulfate, which is made by epithelial
cells
 The GAG is attached to a carbon atom in the core preteen through link
trisaccharide
o The link trisaccharide are three sugars which
link the C of the core protein to the O of the
GAG
o This reaction is caused by glucaronic acid
and N-acetylglucosamine 6-sulfate
 Physically, the proteoglycan resembles a test tube
brush, the GAGs being the bristles
 Since GAGs are negatively charged they can retain
water and have a spongy texture
A glycoprotein, another component of the BM, is composed of 10% sugars, 90% protein. They
are located everywhere in the body and help blood cells fight infection
Unlock document