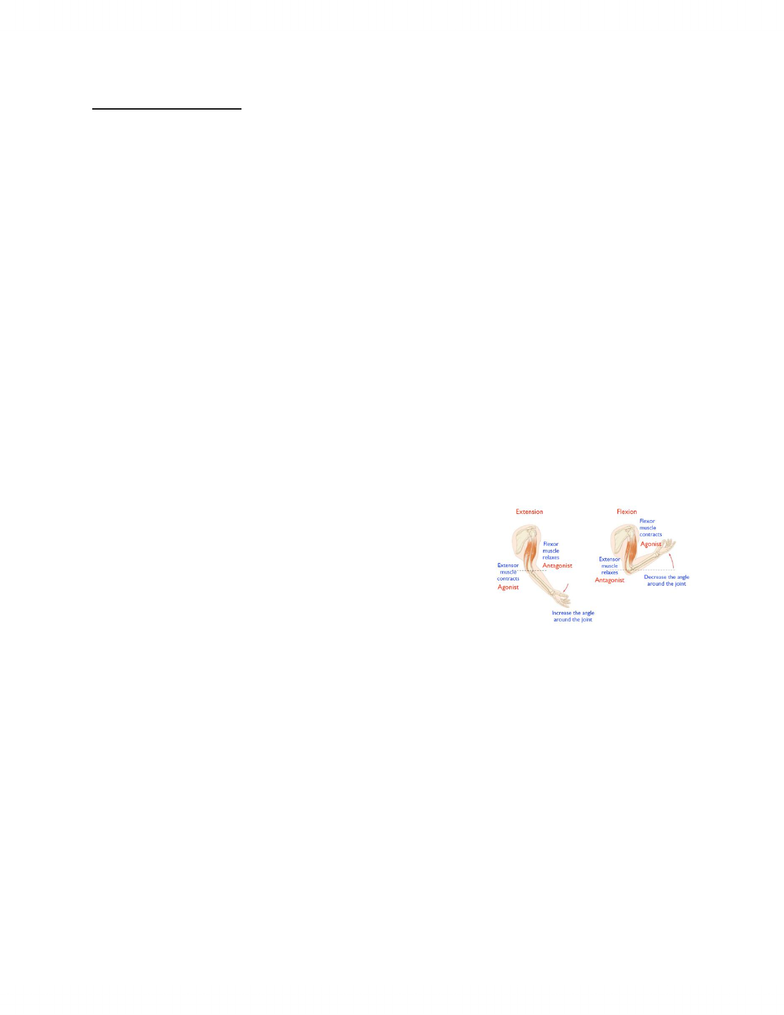 Naveen Sooknanan McGill Fall 2011
1
CNS: Cognitive/Motor
The next area will study is motor behaviour, with an emphasis on the spinal cord because we
know more about it than the brain
 Motor behaviour is goal or purpose oriented due to higher processing in the brain
 There are two types of motor behaviour: voluntary and reflexive
o Voluntary motor behaviour is a very small portion of the overall system. These
are the movements are think about doing
o Reflexive movements are the majority of the system and involve the spinal cord
and regions of the brain
 You don’t think about these movements. For example, simply sitting
upright requires 100s of microadjustments per second so you don’t fall
over
 The nervous system is required for movement. A very peculiar sea animal actually loses
its nervous system and loses its motor function
o At a young age, this organism has a nervous system and swims freely. However,
at some point, it anchors down onto a surface and loses all motor function
 At this point the organism begins to digest its own nervous system for
energy because it no longer needs it
One important factor in muscle contraction is that, although we may not realize it, the flexing of
one muscle always causes the relaxation of another.
 When you inhibit, or relax, a muscle, you are actually inhibiting the motor neurons that
innervate the muscle
 The agonist is the muscle that contracts and the agonist
is the muscle that relaxes (the same muscle can act as
either of these in different situations)
 Extension and flexion of a muscle involve the rotation
of muscles around a joint
o We will only discuss joints that either flex or
extend muscles, not complicated joints like the wrist of shoulder
 Extension around a joint increases the angle around the joint. This is caused by the
contraction of an extensor muscle (in this case the tricep) and the relaxation of a flexor
muscle (in this case the bicep)
o Thus the extensor is the agonist here and the flexor is the antagonist
 Flexion around a joint decreases the angle around the joint. This is caused by the opposite
as above: relaxation of the extensor and flexing of the flexor
o In this case, the extensor acts as the antagonist and the flexor acts as the agonist
This pairing between agonist and antagonist provides coordinated extensor and flexor muscle
activation
 This is done by reciprocal innervation of the agonist and antagonist muscles (one is
excited while one is inhibited)
 Limb position is given by the balance of these muscle pairs
o When they are perfectly balance, the limb stays put
Unlock document 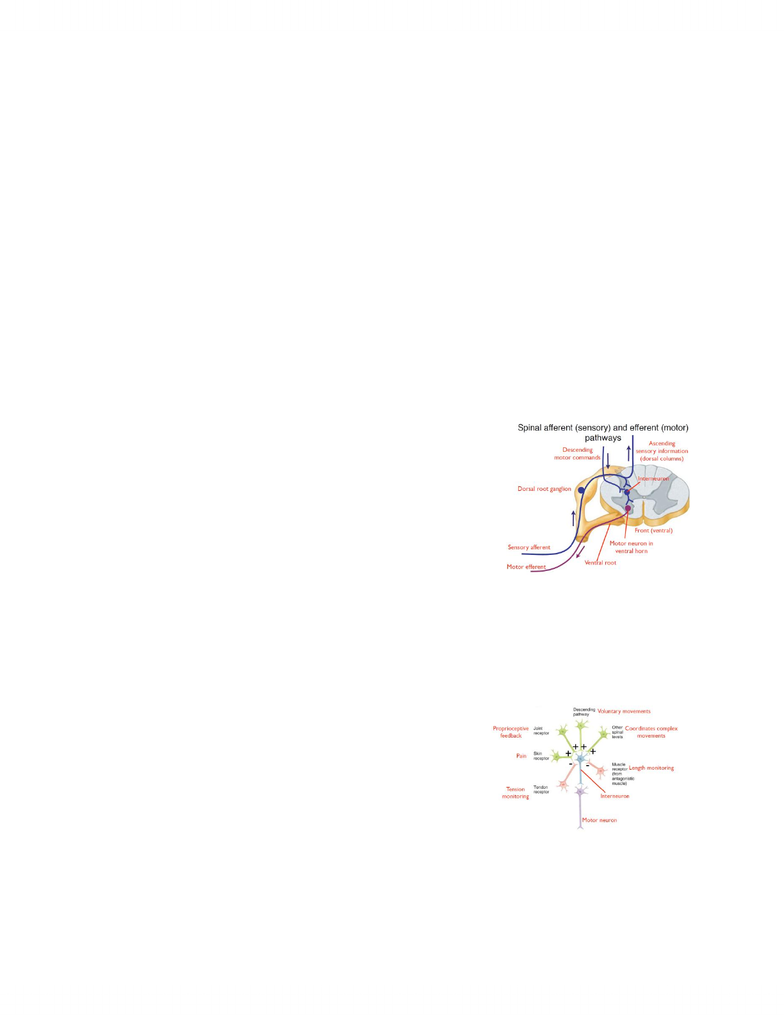 Naveen Sooknanan McGill Fall 2011
2
o When one muscle takes precedence over another, the limb begins to move in the
direction of the dominant muscle
Motor neurons are exclusively excitatory acetylcholine (ACh) neurons which cause muscles to
contract, as we have already learned
 Alpha motor neurons innervate the extrafusal skeletal muscle (we will describe this next)
which cause movement
 Gamma motor neurons innervate intrafusal muscle spindles which are tiny muscles that
regulate muscle length
 These motor neurons have their cell bodies within the ventral horn of the spinal cord or
the cranial nerves of the brain stem
o These neurons synapse with interneurons before they go to their final target
o Motor neurons receive most of their inputs from interneurons, which we will look
at next
Spinal afferents take the path of touch and proprioception, through the dorsal column (we won’t
have to consider lesions here though)
 The efferent (motor) pathway can be activated by descending motor commands from the
brain, but they can also be controlled by interneurons
coming directly from the input in the spinal cord
o The motor efferent then travels to its destination
 Therefore, there is a motor component which is
independent of the brain, which is not surprising because
you don’t need to think about every single muscle
contraction you make
o Both pathways, from the brain and from the input,
synapse with an interneuron within the grey
matter of the spinal cord
o From there, the interneuron synapses with a motor neuron in the ventral horn
which can then carry its information to the destination
Spinal interneurons can be excited or inhibited by different receptors or pathways coming from
different parts of the body
 Pain afferent from skin receptors can activate a reflex through activating interneurons
o For example, putting your hand on a hot stove
will cause you to pull you hand away very
quickly
 Proprioceptive input from joint receptors can excite
interneurons
 Descending pathways from the brain can activate
interneurons based on voluntary movements
o These movements are the ones you think about
 Other spinal levels can coordinate complex movements, such as running, independently
from the brain by activating interneurons
 Muscle receptors from antagonistic muscles which monitor muscle length can inhibit the
activity of the agonist muscle by inhibiting this interneuron
Unlock document 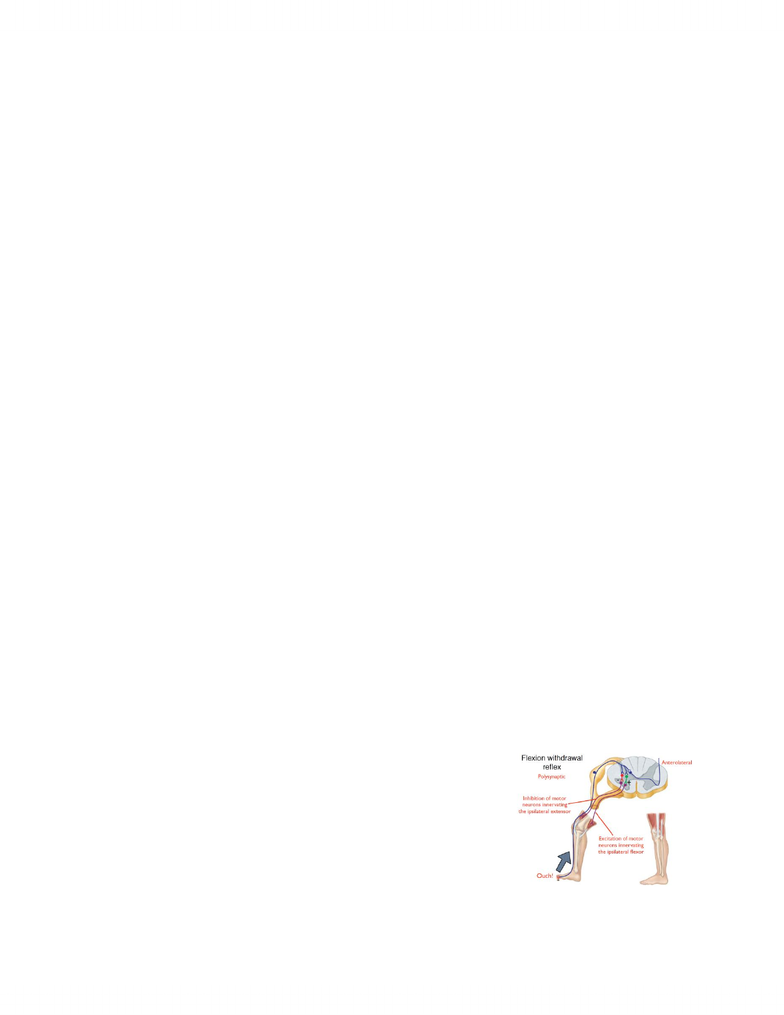 Naveen Sooknanan McGill Fall 2011
3
o This inhibition happens to prevent the agonist from over-exertion
 A tendon receptor, which monitors muscle tension, can inhibit interneurons when the
muscle tension becomes too high
It can be seen through a simple, yet gruesome, example that some motor movements can be
mediated independent of the brain
 Before butchering, a chicken must have its head removed
 There is a period of time after head removal where the chicken can run around randomly
 This means that the motor movements and patterns required for running are independent
of the brain because they can take place when the brain is no longer attached to the body
Spinal reflexes are motor commands that happen without conscious planning (i.e. they are not
activated through the brain). These reflexes have important clinical significance because reflexes
can change with damage to the motor neuron. There are three reflexes which we will study
 The withdrawal reflex is meant to protect the limb from injury
o When you experience something painful, your initial reaction is to pull the limb
away as soon as possible
o This reflex is independent is independent of the brain because it would take too
long for the reflex to happen; the tissue would already be damaged
 The stretch reflex controls muscle length through proprioceptive control
o This reflex can either be monosynaptic (no interneuron required) or polysynaptic
(it synapses with an interneuron)
o This reflex is important in clinical situations because damages to the nervous
system here causes a change in muscle tone (how the muscle pulls)
 In inverse stretch reflex controls muscle tension in order to prevent the muscle from
hyperextending
These reflexes can be overridden to some degree by the brain
 For example, if you are holding a really hot dinner plate, your withdrawal reflex will tell
you to drop the plate, but because you don’t want to drop the plate, you will hold on to it
just long enough to bring it to the table
The flexion withdrawal reflex is a polysynaptic reflex, meaning the efferents in the spinal cord
synapse with an interneuron before being sent to their final destination. For an example, let us
take the reflex involved in stepping on a thumb tack
 The pain afferent will come in through the dorsal root ganglion, as we have learned.
 However, before going to the anterolateral column, the
afferent branches onto 2 ipsilateral interneurons in the grey
matter
o One interneuron synapses with an inhibitory
efferent that travels to the ipsilateral extensor (the
quadricep in this case), and causes it to relax
(becomes the antagonist)
o The other interneuron connects to an excitatory
efferent which contracts the corresponding flexor
muscle (the hamstring in this case), thus becoming the agonist
Unlock document