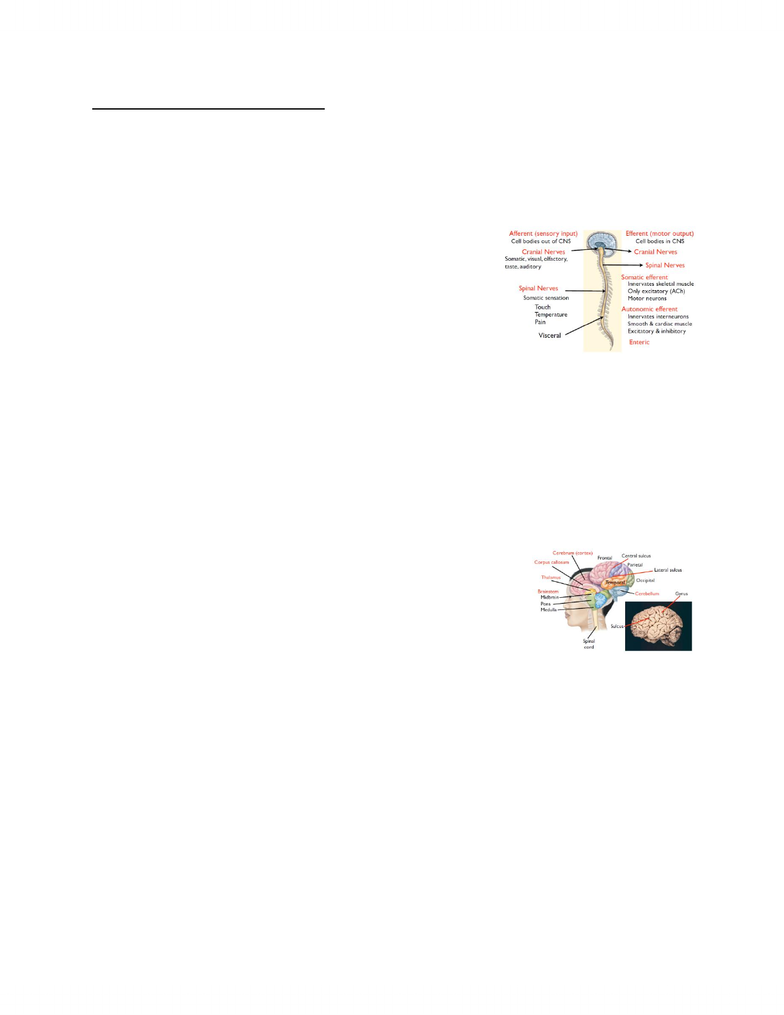 Naveen Sooknanan McGill Fall 2011
1
Central Nervous System – Sensory:
The nervous system can be divided into several major components:
 The central nervous system consists of the brain, which is made of various regions.
o There are afferent nerves which bring inputs to the brain and efferent nerves
which carry output out of the brain and send their axons to motor outputs
 There are 12 cranial nerves which are sent into the brain. They contain somatic (touch),
visual, olfactory, taste and auditory inputs into the brain
for processing
 Spinal nerves are located in the spinal cord and contain
afferent and efferent nerves
o The afferent nerves bring somatic sensation such
as touch, temperature and pain from the receptors
in the peripheral nervous system to the brain
o Efferent nerves can be divided into two
subcategories: somatic and autonomic efferent nerves
 Somatic efferents innervate skeletal muscle and carry only excitatory ACh
motor neurons
 Autonomic neurons innervate interneurons in smooth and cardiac muscle.
These are both excitatory and inhibitory
 Visceral nerves send their axons to the primal cord and contain input from the gut and
internal organs
 The enteric system sends outputs which control the gut and digestion
The brain itself is an incredibly complex organ whose anatomy consists of several regions which
each carry out different functions
 The brain is rich in nervous tissue; 1 cubic mm of brain tissue
can contain 100,000 neurons and over 100 million synapses
 A sulcus is a fold in the surface brain tissue. Between two
sulci in the brain are regions called gyri (gyrus in singular)
o These sulci and gyri are used to increase the surface
area thus allowing the brain to store more information
 The only notable sulcus we need to know is the central sulcus, which separate the somatic
and motor regions of the brain
o Behind the central sulcus are the parietal, temporal and occipital lobes
o Below these is the cerebellum
 On the front side of the central sulcus is the cerebrum (cerebral cortex) and the corpus
callomus (which connects to cortices)
 Deeper within the brain is the thalamus, an important relay station in the brain. Even
further down is the brainstem, containing the midbrain, pons and the medulla
o The medulla connects the brain to the spinal cord
A coronal slice of the brain separates the front from the back, thus exposing the right and left
sides of the brain
 The surface of the brain contains 2-3mm of grey matter, which contains all of the cell
bodies and dendrites
Unlock document 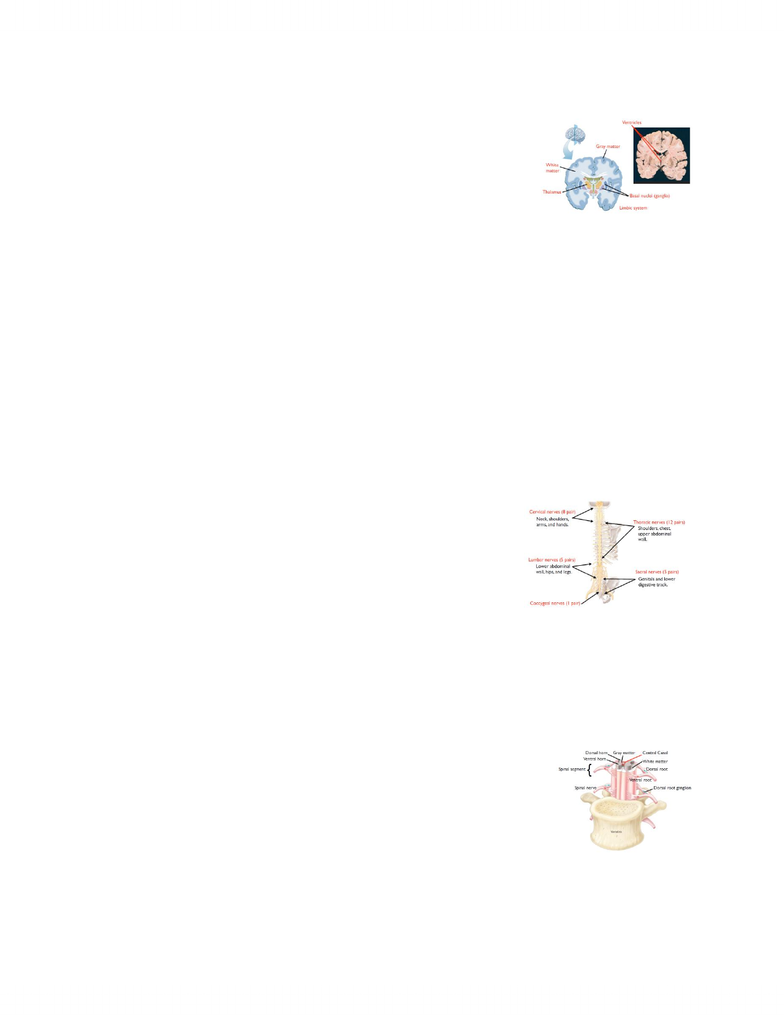 Naveen Sooknanan McGill Fall 2011
2
 Lying underneath this is the white matter, which are all the axons running throughout the
brain
o These axons are myelinated, causing the white
coloration
 Towards the center of the brain are isolated regions of cell
bodies on either side, known as the basal nuclei (or ganglia)
o These are important in motor control
 Further towards the center is the thalamus, lying on both ends of the brain
o The thalamus is important in sensory and processing information
 Also within the brain is the limbic system, which control emotion and memory
 There are spaces in the brain called ventricles which are filled with cerebrospinal fluid
(CSF)
The spinal cord contains the nervous inputs from all the peripheral receptors located all over the
body. It can be divided into two sections, each one being responsible for specific regions of the
body. These sections contain pairs of nerve inputs, located on either side of the spinal cord
 In total, there are 31 pairs of spinal segments, each containing two nerves, which all
travel up the spinal cord and to the brain
o Lesion of a certain region in the spinal cord stop input from that section, and
everything below, from reaching the brain
o Each nerve can contain 1000s of axons
 At the top of the spinal cord are cervical nerves, which receive input from the neck,
shoulders, arms and hands
o There are 8 pairs of cervical nerves
 Next, the thoracic nerves which control the shoulders, chest
and the upper abdominal wall
o There are 12 pairs of thoracic nerves
 Further down are the lumbar nerves which control the lower
abdominal wall, hips and legs
o There are 5 pairs of lumbar nerves
 The sacral nerves are next, which control genitals and the lower digestive tract
o There are 5 pairs of sacral nerves
 Finally, at the lowest end of the spinal cord are the coccygeal nerves
o There is only one pair of coccygeal nerves
Zooming in more to a single region of the spinal cord, the major components of a single spinal
segment can be seen
 The nervous tissue in the spinal cord are surrounded by the bone
of the vertebrae
 Within the vertebrae are axons which run up and down the entire
length of the spinal cord
o These axons create a sheath of white matter on the outer
surface of the spinal cord segment
 Connecting to the white matter are a series of spinal nerves which split into two regions,
either coming out or going into the spinal cord
Unlock document 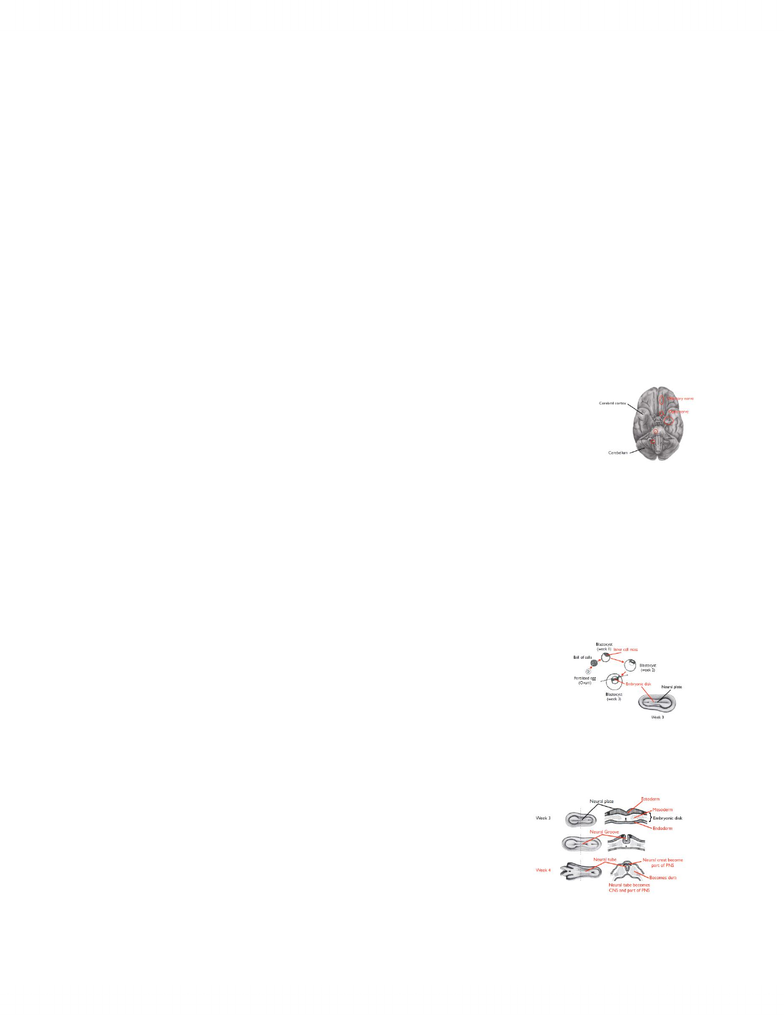 Naveen Sooknanan McGill Fall 2011
3
o The dorsal root (towards the back) is an afferent nerve containing cell bodies
outside and sending their axons into the spinal cord
 A group of cell bodies causes a bulge right outside the spinal segment on
the dorsal root. This is known as the dorsal root ganglion
o The ventral root (towards the stomach) is an efferent nerve carrying output
information out of the spinal cord
o These axons converge as the go to the brain or branch out once they leave the
spinal cord
 Within the sheath of white matter is a region of grey matter. The circuitry of the grey
matter is shaped like a butterfly
o The dorsal horn contains afferent information while the ventral horn contains
efferent information
 Deep within the center of the spinal cord is the central canal, this contains free floating
CSF
The brain contains many nerves each carrying out different purposes. We don’t need to know
specific names of most of them.
 There are 12 cranial nerves in total, only 10 of which enter the brain
stem and 2 which don’t
 Olfactory nerves and optic nerves are the only two which do not enter
the brainstem before they are relayed to other parts of the brain
o The olfactory nerves are responsible for the sense of smell, and optic nerves are
for vision
 These nerves project their information to other parts of the brain
 Because of the extremely tight packing of these nerves, any tumours formed in the brain
can cause serious damage
Development of the nervous system can be seen quite early in development. Specialization of
nervous tissue begins around the third week of development
 The fertilized egg, a single cell, begins to divide into a blastocyst, which can be seen after
1 week
o The blastocyst contains an inner cell mass which “becomes
you” after development is complete
 The blastocyst continues to develop through the second week and
this inner cell mass begins to specialize by differentiation
o At the beginning of the third week, the inner cell mass
contains a layer of specialized cells known as the embryonic disk
 Taking a cross section of the embryonic disc, you can begin to see the formation of
various tubes, one of which becomes the CNS
o The embryonic disk contains an ectoderm, a
mesoderm and an ectoderm
 The neural plate, which will turn into the
nervous system
 Further into the third week of development, a region of the
neural plate begins to pinch off and form a neural groove
 One fully pinched off, this the neural groove turns into the
Unlock document