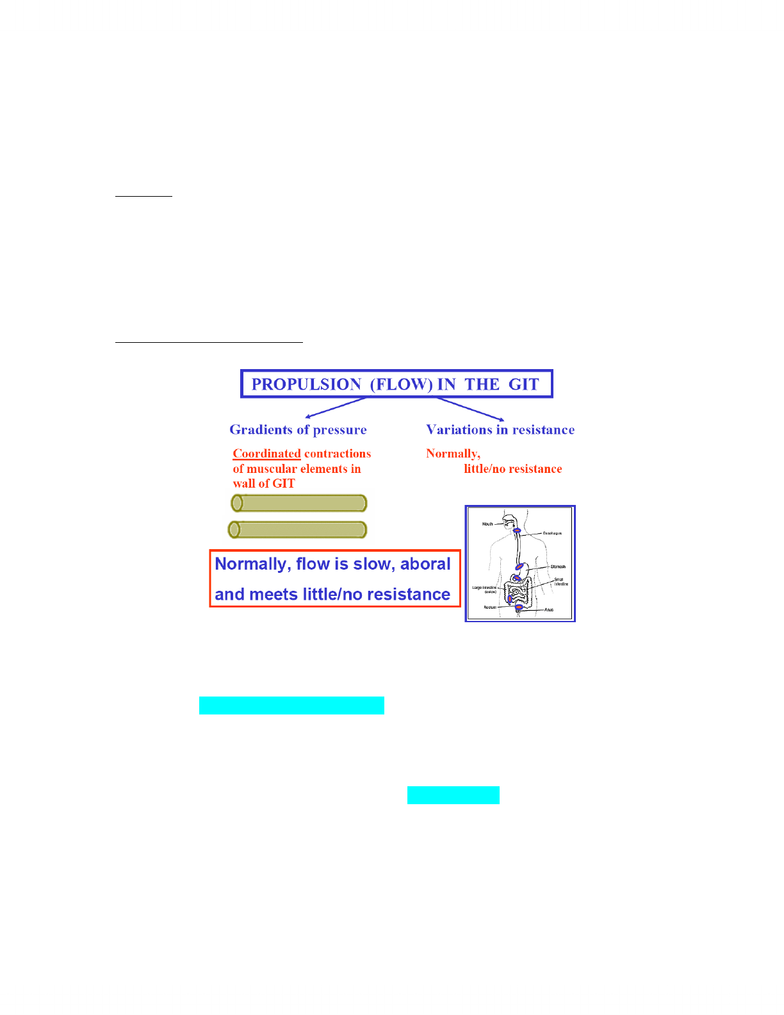 In the GIT, there are 3 identifiable forms of activity:
1- Motility
2- Secretion
3- Absorption
Motility: What brings about propulsion & the physical breakdown of food
The key elements involved in the motility are the 2 layers of muscles: longitudinal &
circular fibers of the muscularis externa.
The uppermost regions (mouth, pharynx and upper 1/3 of the esophagus) as well as the
external anal sphincter are striated muscles. They have specific properties.
The remaining regions are composed of smooth muscles. Their regulation will be diff.
Propulsion (Flow in the GIT)
Propulsion in the GIT depends on gradients of pressure (High to Low).
Also depends inversely on resistance. The more resistance there is downstream, the
more difficult it is to propel some substances downstream.
There are 2 types of contractile activity within the GIT:
oThe length of the GIT periodically contracts at various points which
gives rise to sausage-like segments. These are followed by periods of
relaxation. → Very effective mixing mvt. They can also be involved in
the propulsion of the meal away from the mouth.
oPropagated wave of contraction (PERISTALSIS): moves contents in one
direction → plays major role in most regions of the GIT in mediating
propulsion
Resistance: at normal circumstances, the meal encounters few. It used to be thought
that the various sphincters which separate the organs of the GIT played a major role
regulating the transport of the meal.
Unlock document 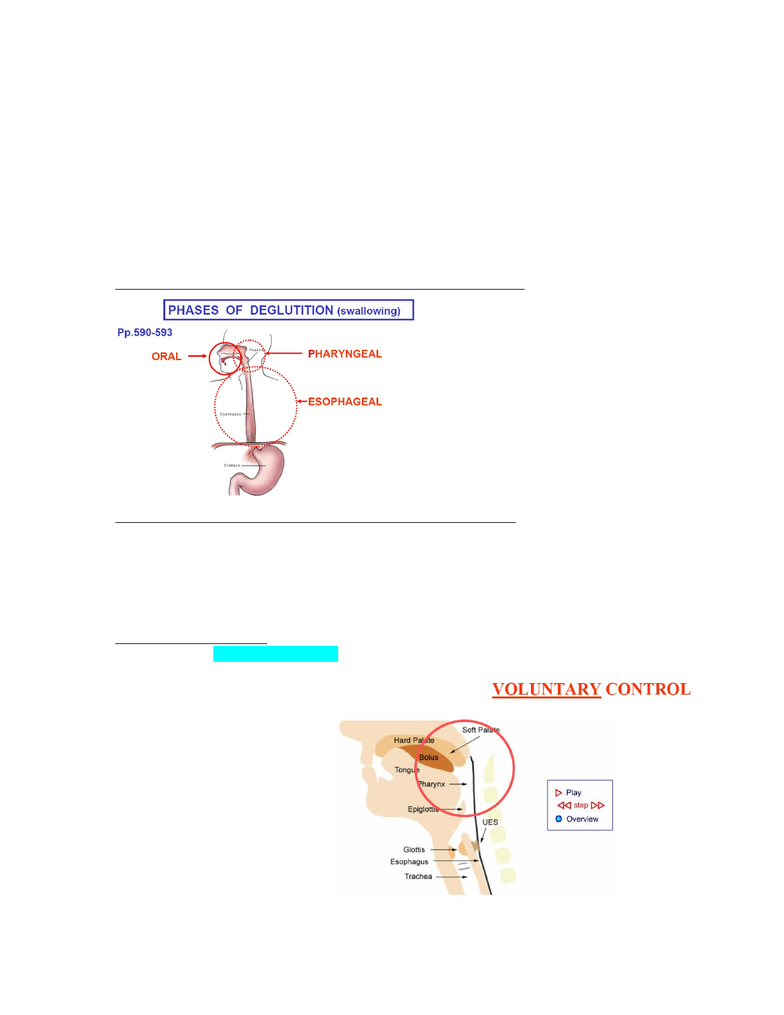 We now know that, normally, these sphincters do NOT offer resistance. They
actually open reflexely, anticipating the arrival of the meal contents in the lumen of the
GIT. They allow the meal to go thru and close to prevent regurgitation of the contents
from 1 organ to the organ above it.
Pathologically, there are situations that prevent the sphincters to relax or more
commonly, there are situations that prevent the sphincters to close completely & allow
for reflux to happen. However, NORMALLY, there is little or no resistance.
Normally, the flow is slow (several hours for the meal to go the GIT), aboral (away
from the mouth towards the anus) and meets little/no resistance.
First propulsive force : DEGLUTITION ( Vander’s pp. 590-593)
Immediately after digestion
Deglutition is a process which
involves highly coordinated
muscular activities.
Result: transport of the food thru
the oral cavity, across the pharynx,
into the esophagus & all the way
into the stomach.
We usually discuss the mechanical of deglutition in terms of 3 phases:
Oral: transport thru the oral cavity
Pharyngeal: transport across the pharynx
Esophageal: transport into the stomach
All these phases proceed smoothly and sequentially
Deglutition (swallowing): is accomplished thru a complex series of highly coordinated muscular
mvts aimed at building up pressure, temporarily sealing off of compartments to prevent
dissipation of pressure and decreasing resistance (by relaxation of the sphincters)
Oral phase
Transport from anterior portion
of the mouth into the pharynx
 voluntary control
You take a morsel of food, you
chew it & it becomes coated w/
saliva.
Thru the combined actions of
muscles in cheeks, lips tongue,
the food is brought on the upper
surface part of the tongue.
Unlock document 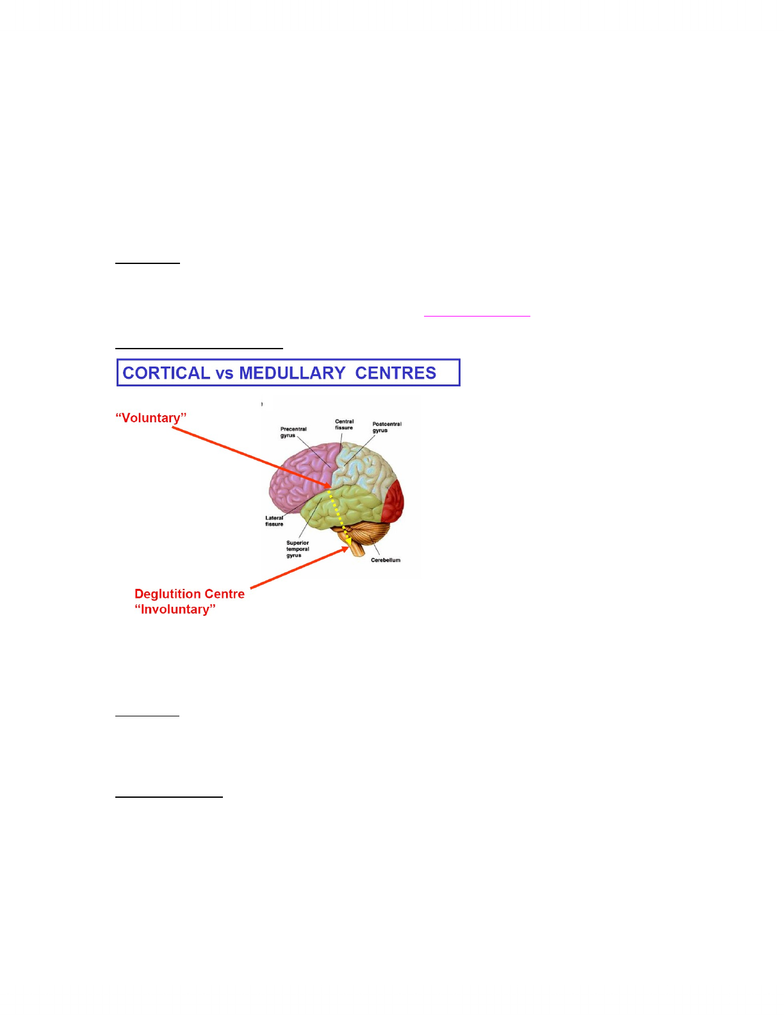 Once it is in that position, thru the elevation of the upper tip of the tongue and retraction of
the lower tip, the food is rolled b/w the tongue and palate, it takes a rounded shape and
becomes known as the bolus.
It rolls to the back of the mouth and the bolus is projected into the pharynx
The oral phase of deglutition is under voluntary control. You can start/stop to swallow at will.
From evolutionary standpoint: transport across the rest of the GIT is involuntary (except
defecation, which can be initiated voluntarily). The initiation is voluntary, but the act itself is
carried out by highly coordinated reflexes (by definition, involuntary)
Oral phase:
transport of bolus (masticated, ensalivated mass of food) from anterior to posterior
portion of mouth
This involves a series of reflexes coordinated in deglutition centre in medulla oblongata
Cortical vs Medullary centers
There is a region in the
precentral cortex of the gyrus
that, when stimulated, will
initiate swallowing.
Also involves reflexes that are
initated by presence of food in
the mouth that are coordinated
in the medulla oblongata
which is the deglutition
center. → can carry out the
sequence of mvt involved in
the oral phase of deglutition
When you voluntarily
swallow, the impulses from
the cortical center facilitate
the reflexes which are coordinated in the deglutition centre (this also applies to the
defecation)
Voluntary – in cortex
Deglutition centre – “involuntary” – in the medulla
Oral Phase
1. ability to initiate: voluntary (cortex)
2. coordinated movements: reflex, involuntary (medulla)
Pharyngeal Phase
Pharynx: where the respiratory and digestive pathways cross
Pathway from the nose, across the pharynx into the trachea & pathway across the
mouth, thru the pharynx and into the esophagus
It is obvious that for swallowing to occur safely and w/ right pressure for the
bolus to enter esophagus, all the openings leading from the phrarynx, have to be closed
(protect the resp passages).
Unlock document