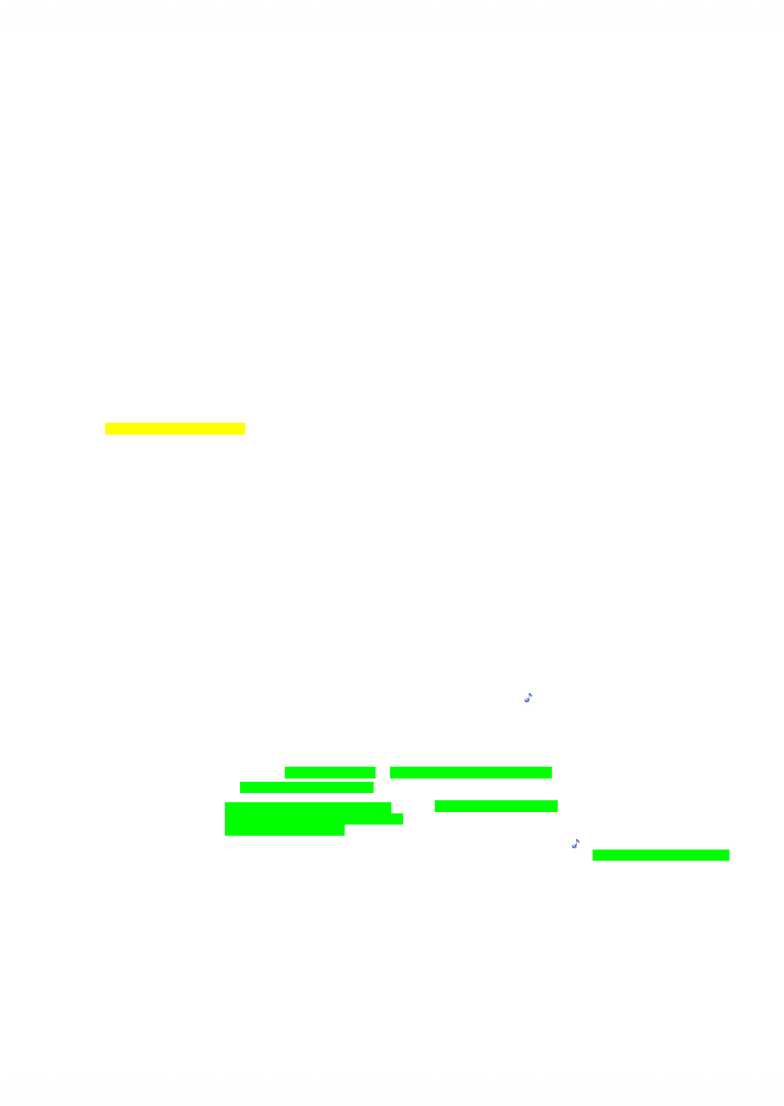 It isn't "Art" (classical) music
•
Not absolutes, they are our opinions
•
Is made by people for their own entertainment

Made by people who do something else for a living

You do it because you love it
□
Amateurs

Folk music
○
Not considered folk music
•
Neither good nor bad
○
Money is involved, people trying to make a living at it
○
Making, producing and performing for a market
○
Interested in people listening to it and liking it
○
Because market are involved we need distribution
○
Music that is produced for money
•
Dealing with music that is very important in terms of its relationships with mass media
•
Interconnected with changes in technology
•
There is music that you like, there is music that you don’t like. But there is nothing objectively in music
○
There is no such thing as bad music
•
Music that we like reflects social values that we believe are important
•
What went into forming Popular Music
•
Massive social experiment that started 400 years ago
○
interactions

Mass amounts of Africans and Europeans living together
○
Most important influence
•
Issues of gender, business etc.
•
What is "Popular Music"?
West coast just under Saharan Desert
○
South: African culture
○
North: Middle East
○
Africa
•
England, little bit of the British Isles
○
Europe
•
We create culture based on models we see around us
•
Based on where you grew up and with whom you grew up
•
In North America those divisions are drawn on physical appearance
•
Birth place of rock and roll
•
The interaction of "African" and "European" Culture
•
When does the history of Popular Music in the West begin?
1619-1863
•
First time we know of this happening on North American Soil
•
Millions of folks from west African were attacked, beaten into submission, chained (many killed), loaded on a ship,
shipped across the ocean in HORRIBLE conditions, then sold to the highest bidder. As long as they did their work
they lived, when they could no longer work they died
•
North American Slave Trade
Differences in North and South American based on religion of slave owners
•
African Retention more obvious in South American music
•
Catholic
○
Spain and Portugal controlled south America, big chunk of Central America
•
During free time slaves were allowed to practise and do whatever they wanted to do as long as
they didn’t cause trouble
○
New Orleans

Catholic
○
France controlled South America, North America (till war with British), Caribbean
•
Wanted to stamp out "Africanness"

Protestant
○
British controlled North America
•
Treatment of Slaves
Interest in percussive and distorted timbres
1.
Values in the Ecstatic and the Cathartic
2.
Rhythmic complexity - syncopation
3.
Use of "riffs"
4.
Use of "call and response"
5.
Slavery ends when Abe Lincoln signs the emancipation proclamation
•
Civil war fought over slavery?
•
Really fought over whether the territories to the West of the Mississippi would be slave states or free states
•
Would have died out by 1820
○
Slavery was already on the way out
•
Made cotton production easier
○
Eli Whitney
•
Slavery ends in 1865
•
Recording technology not created until 1875
•
Made a great effort to inform people about how life was really like as a slave
○
Mark Twain wrote about his travels in the south
•
Wrote at length about slavery
○
Charles Dickens
•
James Brown - invented Funk music
•
African Retentions in music:
Group coordination
○
Pay careful attention to the way the things were the night before
○
Set pace to the slowest/weakest worker
Pass time/set pace, coordinate work
•
Work Song:
Example of African American musical culture
•
Example of what a lot of music historians think you might
have heard if you were listening to African slaves working
•
1947
•
Written in 1945
•
Realized in the south that many cultural practises
were going to vanish and went to rural towns to
record all songs
○
Recorded by Alan Lomacks
•
Old Alabama
Timbre: quality of sound
Distortion indicates an overload of emotion
Putting themselves physically in jeopardy
Call and response: musical tennis
Shown as showing commitment
Syncopation: Very complex rhythms
Legacy of slavery is
fundamental to what goes
on in the US today
Riff: small self contained piece of music that
repeats creating a larger composition. (remains
the same throughout the music)
Led Zeppelin - Whole Lot of a Love
•
Motif: changes in every possible way
•
Example of a Riff:
Pre-War Period
September-03-11
8:38 PM
Music 2II3 Page 1 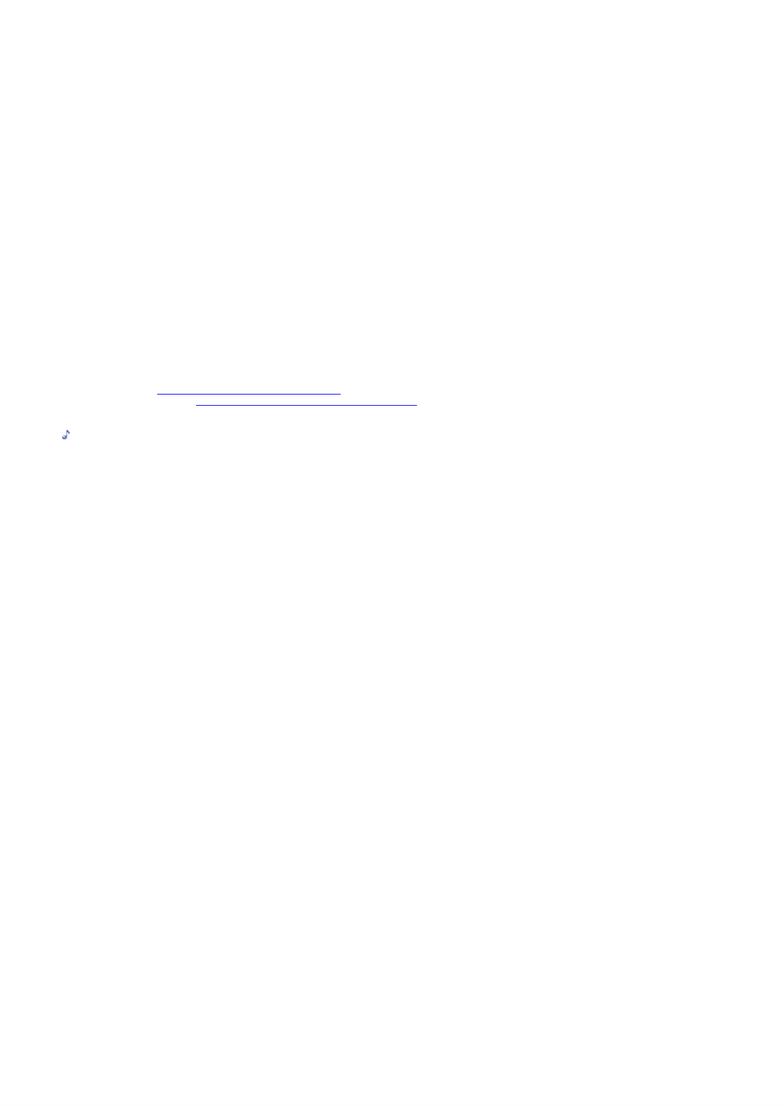 Set pace to the slowest/weakest worker
○
Created songs everyday
○
Slave owners realized this

A good song leader got more work done
○
Song leader
•
"floating pool of verse"
•
No instruments
○
Acapella, music made only by singing
○
Slaves had virtually nothing
•
All documents tell us they sang
•
Specific music was sang for different things
○
In West African Culture music was all over the place
•
Old Alabama's format-
•
Called a 'Form chart'
•
4 3 3 4 3 3 4 4 3 4 3 3 3 4 3 3 3
•
A a b a a b a a b a a a b a a a b
•
The numbers represent the number of bars or 'measures' for each line of words.
•
The lower case letters refer to the text of the song
•
Upper case are melodic
•
In Old Alabama, they repeat the first two lines then change what the lyrics are for the third line thus it goes
a(same) a(same) b(different). This resets every 'verse'. So if it was abc for the first verse the second verse would
not be def, it would be abc again (or a different derivation)
•
If a professional musician wrote the form chart the bars would all be the same and the verses would all be aab as
well instead of changing it later to aaab
•
The workers lack self-consciousness- did not pay attention to right or wrong notes, just felt through the music,
hence the shift in bars and verse length
•
Eli Whitney invented the cotton gin which prolonged slavery.
•
Thomas Edison invented the Gramophone in 1875
•
-->Friday notes
Audio files found at http://www.humanities.mcmaster.ca/~orion/2ii3
First two chapters available at http://www.wwnorton.com/ebooklite/wts2e/welcome.asp
Spiritual/Gospel
•
Slaves read the bible and learned of the tale of Moses(Israelites being put into slavery and saved by Moses)
•
Call and response
○
Use of body-clapping and stomping
○
Ecstatic outcry of participants during song
○
Distortion of vocal timbre
○
"Oh Jonah" The Golden Jubilee Quartet

Line Hymn usually does call and response, but the slaves added their improvisation into it.
○
Gospel develops early in the post-war period when after the freedom of the slaves, a lot of people who were
supporting it opened up colleges and universities for blacks.
○
"Lined Hymn"
•
They needed to sing for the whites to make money and made a more typical European sound, Gospel.
•
Music 2II3 Page 2 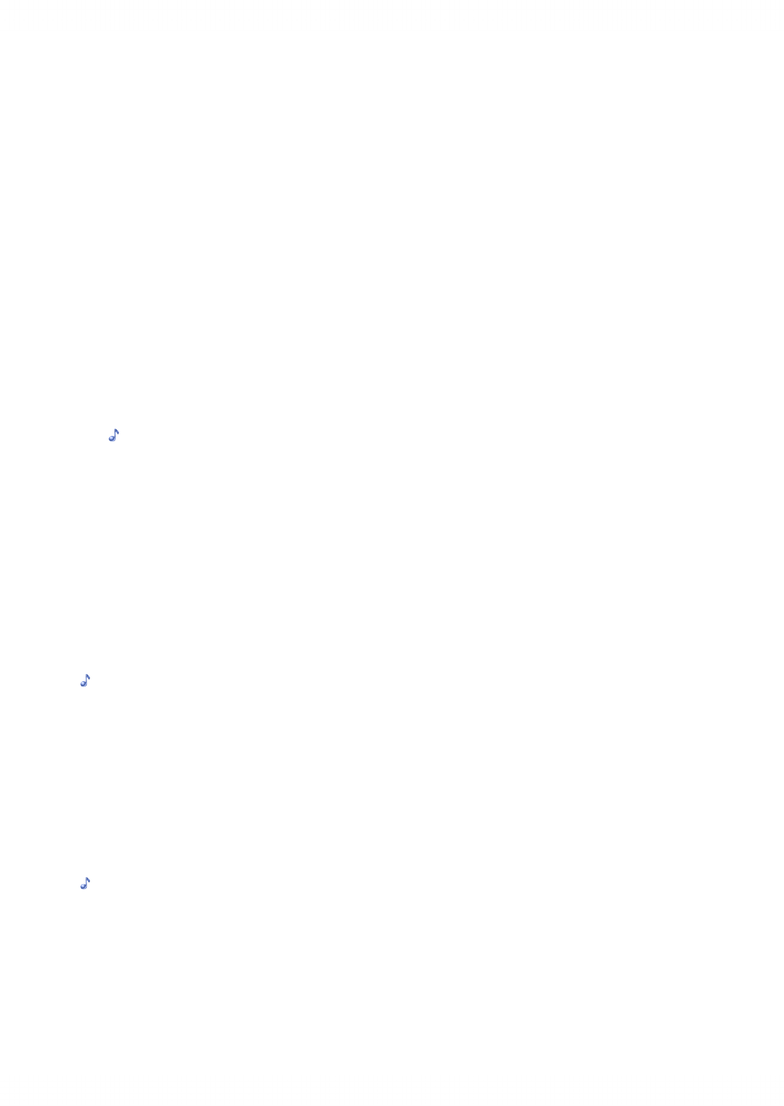 New forms of music begin to appear during the late 1800s: Ragtime, Jazz, Blues.
•
No new cultural forms occur until 20 years after slavery because of the lack of a change of mindset.
•
Ragtime: Example- The Entertainer
•
Jazz- Addition of the drum kit.
•
Blues- Considered as a musical aesthetic OR an actual musical structure.
•
performed by a wandering musician who sang and accompanied himself with an acoustic guitar
○
First form of Blues is called Country (rural) Blues.
•
It was dangerous to travel in the rural areas, especially if you were alone and black.
•
Very plaintive vocal sound
○
The themes are interesting because they are all things of which the now free slaves could not have prior to the
end of slavery

Themes included :Travel, Economics and Love.
○
Aesthetic characteristics,
•
12 measure phrases
•
a-a-b lyric pattern
•
call and response between guitar and voice: Voice sometimes would go for two bars then guitar would play the other two
•
associative coherence
•
floating pool of verse: Blues musicians would slip local names and issues into their songs
•
Chords are based around the chromatic scale. I being the first chord IV being the fourth chord.
•
Subject: Travel/ Economics

Uneven bar counts

Lack of self-consciousness

Accent and nasal sound of voice

Makes music for the love of it not for money
□
"folk musician"

Starts off with an improvised narrative then moves onto the blues part after the fact.

One of the three (arguably most) influential structures in music

In Travelin Blues he makes a transition into 2/4 at the end of each line

Willies Mctell's lack of self-consciousness is important because when Blues gets recorded Blues goes under a
large change

'Travelin' Blues'-1927
○
Blind Willie McTell- Blues musician.
•
Robert Johnson is the source of a whole generation of Blues musicians
○
Known as a 'Guitar Hero'
○
He defined standards for blues guitar
○
Recorded November 1936 and June 1937
○
Robert Johnson (1911-1938)
•
Even bar counts
○
Intro and Conclusion aren't very common in folk music but they're in this song
○
Call and response
○
Demonstrates self-consciousness
○
Dynamics in the intro
○
Sweet Home Chicago
•
1453- Printing Press
○
1557- Queen Mary: Stationer's Company- First copyright law.
○
First time we see copyright law reorganized into something we would recognize today

1709- The Statute of Anne
○
1790- First US copyright law: Its the model for copyright law in the entertainment industry
○
1831- Amendments to the copyright law to cover sheet music: Tells us there were a lot of people trying to make a
living by making and playing songs(Lobbying the government)
○
Important events for the "Standardization of Music"
•
variety show that depicted African-Americans in a negative light
○
simplistic, child-like people
○
slavery was a natural state
○
White performers in blackface
○
Minstrel shows were a medium written by whites, performed by white, performed for whites and had nothing to do
with black culture
○
Minstrel Show:
•
The forerunner to the Vaudville show(Something that showed the first movies etc.)
•
Typical instruments you would see in these types of shows were: An Acoustic Guitar, Banjo, Fiddle,
Tambo(tambourine player)
○
Minstrel Shows were a massive source of popular music.
•
The Bones(played sticks ((somewhat like playing the spoons)) )
•
Racist depictions- Coon songs- often depicted the life of the slave as idealistic
•
Musical Form
Post Slavery
October-04-11
11:01 AM
Music 2II3 Page 3

Is made by people for their own entertainment. Made by people who do something else for a living. Money is involved, people trying to make a living at it. Interested in people listening to it and liking it. Dealing with music that is very important in terms of its relationships with mass media. There is no such thing as bad music. There is music that you like, there is music that you don"t like. Music that we like reflects social values that we believe are important. Massive social experiment that started 400 years ago. Mass amounts of africans and europeans living together interactions. We create culture based on models we see around us. Based on where you grew up and with whom you grew up. In north america those divisions are drawn on physical appearance. First time we know of this happening on north american soil.