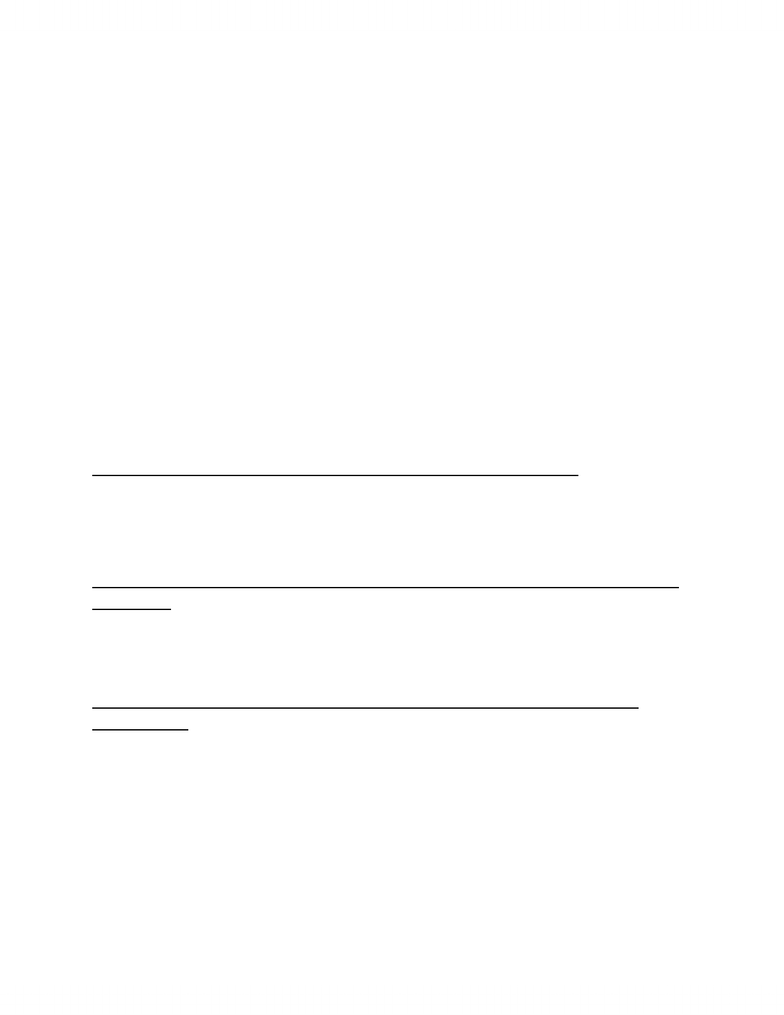 Audition (March 11th, 2013)
“if a tree that falls in the forest and no one is around to hear it, does it still make a sound?”
--the thick of determining what sound is; is it strictly the product of an external stimulus. We
may consider sound to be the result of our own sensory processing, in which case, you could
argue that if no one was there to hear the falling tree, then the tree would make no sound at
all?! Answer question logically, the falling tree would produce a sound wave. Just like the visual
system can interpret light waves to collect information about stimuli in the environment, the
auditory system can translate sound waves from vibrating objects into the psychological
experience of audition.
1. Sound is the result of our interpretation of wave. The falling tree would certainly
produce sound waves, but the sound waves themselves do not make sound unless an
auditory system is present to translate those sound waves into perceptual experience of
audition.
The auditory mechanisms of different species
Auditory mechanism vary across different species according to specific needs: whether they live
in water, land or air; whether they need to communicate over long distances; whether they
need to be able to receive high or low frequency sounds.
Sound Frequency
One way that the hearing abilities of various species differ is the range of frequencies that can
be detected. (Ex: if you’re even tried blowing a dog whistle, you know that blowing the whistle
doesn’t produce any audible sound to your own ears, but you will certainly have a dog’s
attention! The dog whistle produces a sound at a high frequency that is beyond the range of
human ears but well within the range of the dog’s auditory system.)
Human can perceive sounds that lie anywhere between 20 and 20,000Hz, a respectable
auditory range.
Relatively speaking, whales, dolphins and dogs have a wider hearing range, while frogs and
birds have a much narrower range of frequencies that they can detect. At the lower frequency
detection extreme are fish, while at the higher frequency detection extreme are bats and
rodents. So if a fish and a bat were able to communicate, the conversation would have to be
based on the narrow range of frequency overlap available to both species – at about 2000Hz.
This would presumably sound very high-pitched to the fish and very low-pitched to the bat.
Unlock document 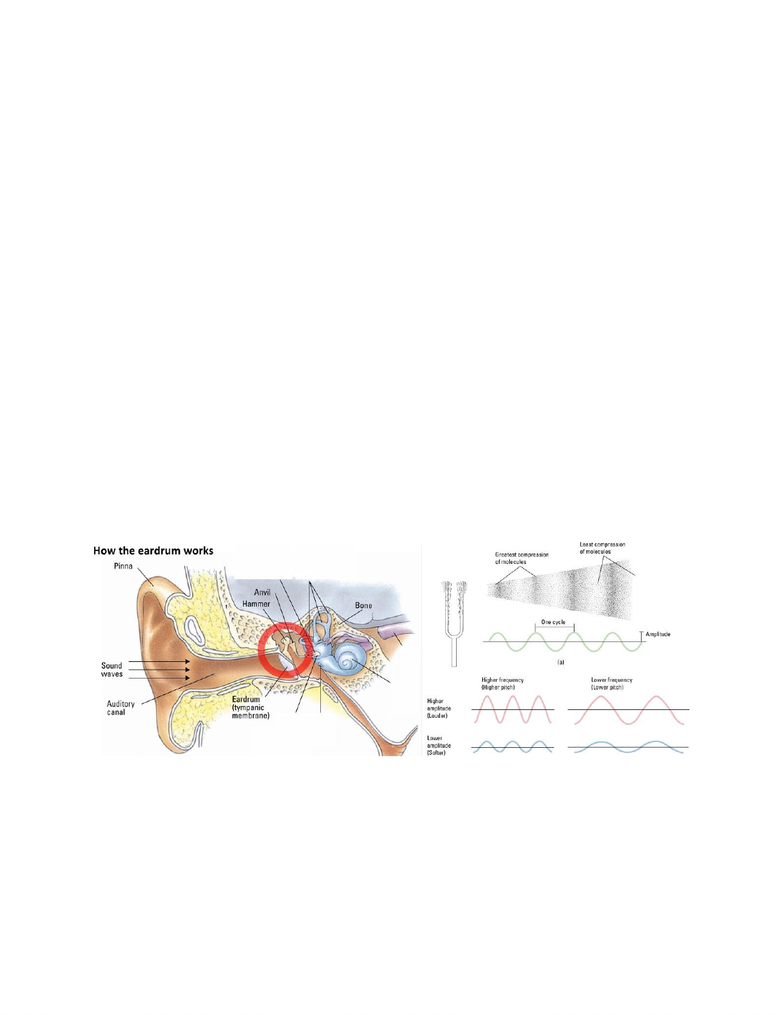 Environmental impacts on auditory structure
Audible frequency range is determined in part by the evolution of the structures of the auditory
system. One key structure is the basilar membrane which contains the hearing receptors;
sounds of different frequencies are processed along different areas of the basilar membrane.
The basilar membrane varies in length across species. It is shortest in amphibians and reptiles,
longer in birds and longest in mammals. A longer basilar membrane allows processing of a
wider range of frequencies. So, mammals can discriminate the widest range of frequencies
while most other species can’t discriminate frequencies over 10,000 Hz.
Sound waves
Like light, sound travels in waves; although sound waves travel much slower and required some
medium to travel through. Sound waves are initiated by either a vibrating object, like our vocal
cords or a guitar string, a sudden burst of air like a clap. This causes the air molecules
surrounding the source of the sound to move, causing a chain reaction of moving air particles.
This chain reaction is much like the ripples you observe when you throw a stone into a pond.
The point where the stone hits the pond produces waves that travel away in all directions,
much like the alternating bands of more and less condensed air particles that travel away from
the source of a sound.
The eardrum responds to air pressure changes
These alternating bands of more and less compressed air molecules interact with the eardrum
to begin auditory processing. A band of compressed air molecules causes your eardrum to
pushed slightly inwards, whereas a band of less dense air particles causes the eardrum to move
outwards.
Sine Wave
The changes in air pressure over time that make up a sound wave can be graphed as a sine
wave, as shown above. In our survey of the neurophysiology of vision, we examined 3 physical
Unlock document 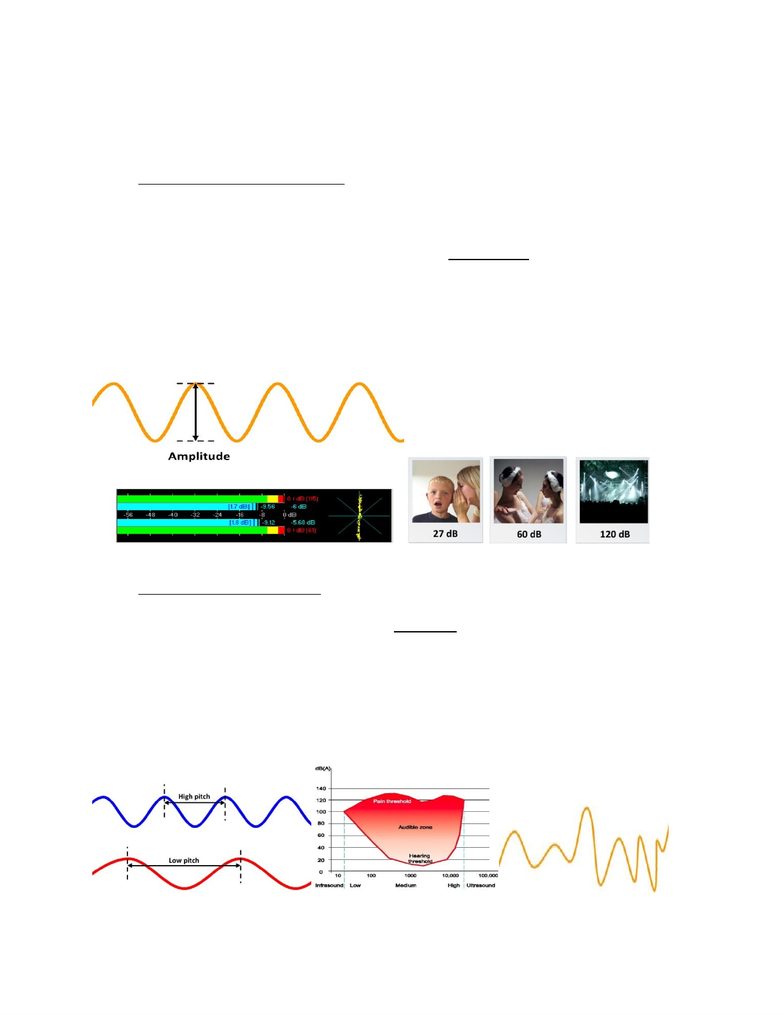 characteristics of a wave: amplitude, wavelength and purity; which translated into the 3
psychological perceptions of our visual world. In addition, the same 3 physical characteristics,
where applied to sound waves, translate into the 3 psychological properties of loudness, pitch
and timbre.
I. Amplitude: measure of loudness. Variations in the amplitude or height of a sound wave
affect the perception of loudness. Since waves of greater amplitude correspond to
vibrations of greater intensity, higher waves correspond to louder sounds. Humans are
sensitive to a very wide range of different sound amplitudes, and because of this,
loudness is measured using a logarithmic scale of decibels(dB). In this scale, the
perceived loudness of a sound doubles for every 10dB increase. (For example: a normal
conversation takes place at around 60dB, a whisper at around 27dB and sitting in the
front row at a rock concert means you get to hear the music at around 120dB. As
enjoyable as this may be, even brief exposure to sounds this loud can cause physical
pain and permanent damage. Many listeners crank up their personal music listening
devices such that they are effectively listening to their music at 120dB.)
II. Frequency: measure of pitch. Sound waves also vary in the distance between successive
peaks called the wavelength or frequency of the sound and this property affect the
perception of pitch. Pitch is measured in Hertz(Hz); which represents the number of
cycles per second, or the number of times in a second that a sound wave makes one full
cycle from one peak to the next. So, if many we peaks are condensed into one second,
then this sound will be of a high frequency, and result in the perception of a high
pitched sound. (we call the visible spectrum of light is only a small portion of the total
spectrum of light waves; similarly, the audible zone of frequencies that humans can
detect represents only a portion of the possible frequencies that can be produced.)
Unlock document