DOMESTIC vs. PUBLIC SPHERES
(Agency & communal)
GCCP Pg 148-151 Gender Business and Space Control: Yoruba Market
Look at slide 53-57
GCCP Pg 81-bottom of 83 The Domestic Spheres
● Men have some authority over women, have culturally legitimated right to her
subordination and compliance
● Confinement of women in the domestic spheres and men’s ability to create and
dominate the political sphere thus accounted for the men’s ability to hold a greater share
of power and authority
● Men tended to avoid women’s places
● Men and women had different activities and interests
● Women are important structural links between social groups and acts as meditators
● The domestic/public dichotomy is not realistic, should recognize domains occupied by
men and another by women
RECAP:
Agency-communality dichotomy: best describe the gender stereotypes that we have in our
society
Men are agentic
Women and communal
Two dominant gender stereotypes (idealized, not natural)
The Ideology of Two Spheres
Rosaldo: proposed a framework to observe/examine this phenomenon called the Domestic /
Public Spheres or the Ideology of the Two Spheres
A key point: Rosaldo’s original incarnation of the model = this split was universal
Major challenge and critique to her model: The Domestic/Public split does not occur in all
societies
Men associated with the PUBLIC SPHERE
Women associated with the DOMESTIC SPHERE
Domestic Sphere
Denotes the physical location & types of activities that take place in association with the
home
● Household Labour: unpaid tasks performed to satisfy the needs of family members or to
maintain the home and family possessions
● Gendered Feminine
● Unpaid tasks are considered “unproductive”
find more resources at oneclass.com
find more resources at oneclass.com
Unlock document

○ Not included in the GDP
○ BUT has economic value
○ Hidden costs of economic growth: if you have to take time off work to care for
an elder relative
○ Women accounted for 62% of total estimated value of unpaid work
● Rosaldo didn’t think that women’s “Domestic orientation” was a “necessary one”
● “In other words, biology is not destiny”
● But rather the association between women & the Domestic was “structurally and
culturally constructed”
● a major factor – the degree to which mother + child care tasks were associated in a
given society – in some societies, this overlap is greater than in others
Public Sphere
Public domain includes political and economic activities that take place beyond the
localized household unit
● Paid labour: “productive” tasks
○ gets included in the GDP
● Gendered Masculine
Comparing the Public vs Domestic
1. Activities that take place in the Public Sphere tend to be more highly valued by society
than activities that take place in the Domestic Sphere (e.g. gender asymmetry p. 81)
2. This is not to say the work in the Domestic is not important or rewarding; BUT Public
sphere is associated with greater power than the Domestic
POWER: The ability to act effectively on persons or things; to take or secure
favourable decisions (MG Smith (1960)
Does the Domestic/ Public Split occur in Canada?
Part 1) The Domestic Sphere in Canada
Unpaid Household Labour in Canada (Statistics Canada, General Social Survey data)
● Primary Child Care: consists of activities directly involving children, such as feeding,
helping, teaching, reading to, playing with, medical care, and any related travel such as
taking children to school or driving them to sports or other activities
● Housework: yard work, getting groceries
find more resources at oneclass.com
find more resources at oneclass.com
Unlock document 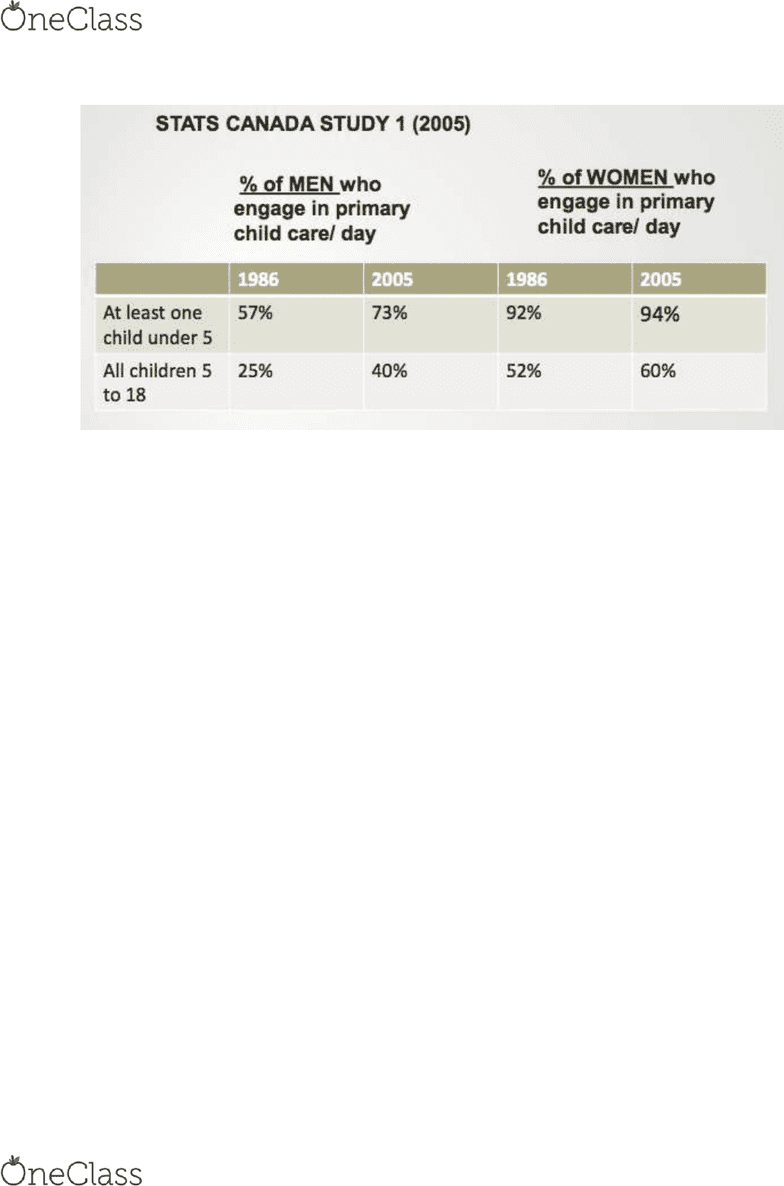