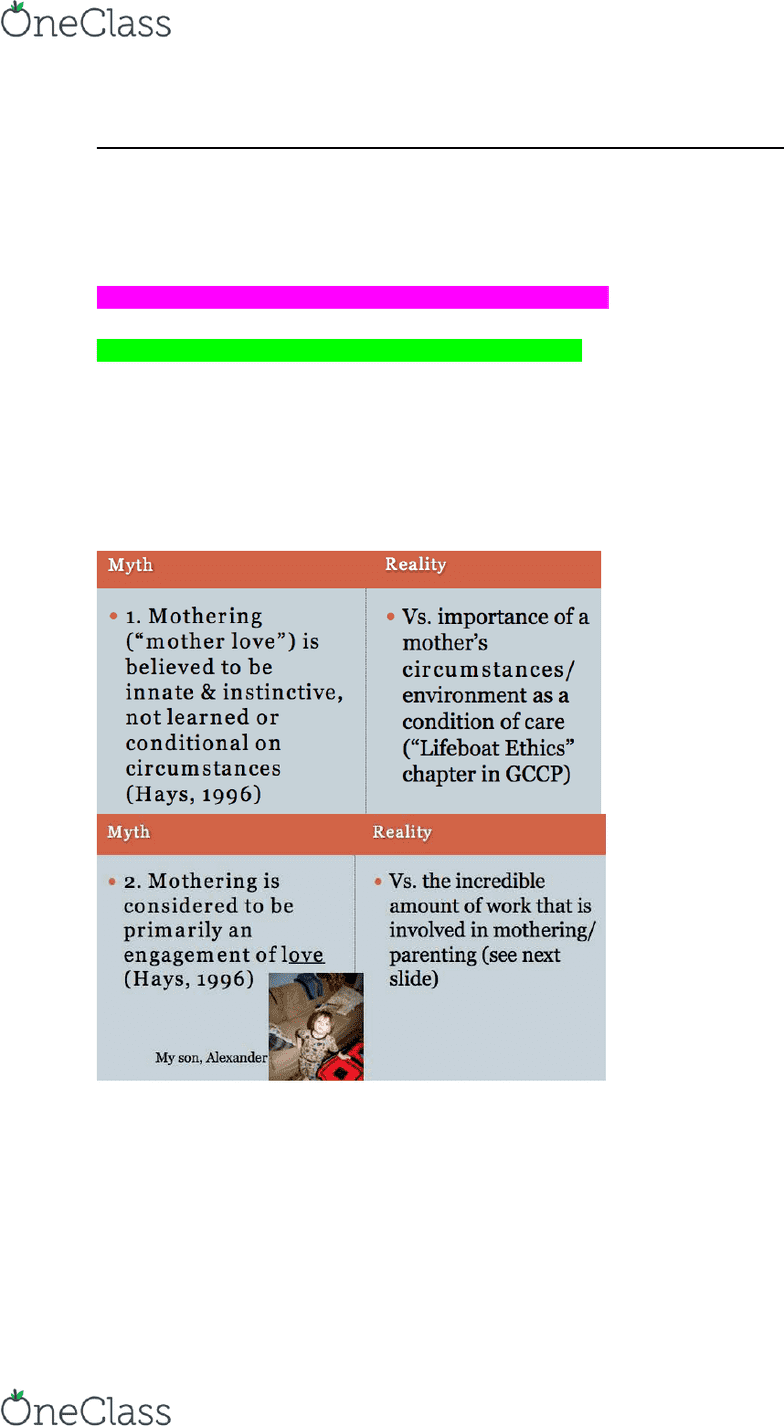 The Ideologies, Experiences & Institutions of Motherhood & Fatherhood
The Agency-Communality Dichotomy in North America promotes and maintains our beliefs
about motherhood and fatherhood Our beliefs about mothers and fathers have far reaching
implications in our personal lives and our public lives
The Ideology, Institution & Experience of Motherhood
1. Ideology: Content of the Motherhood Stereotype
Mother Mandate in North America
(I) “Motherhood mandate” = Pervasive assumption in our society: To be complete and
successful, a woman must have children (Russo, 1976)
ex/Jennifer Aniston: societal pressure on women to have children
(II) And be a certain type of mother = Motherhood Stereotype: 3 main components (Hays, 1996)
(learned not instinctive)
Luxton (1977) writes about our society’s conflicted ideas about mothering/maternal
practice: “As a ‘labour of love’ this work is not respected in the same way as wage work, partly
because it is not directly supervised and because its standards and schedules seem to be
determined by the women who do it. As a job it is full of contradictions. On the one hand, it is
important, necessary and potentially satisfying. On the other, it has low status and is often
isolating and frustrating.”
find more resources at oneclass.com
find more resources at oneclass.com
Unlock document 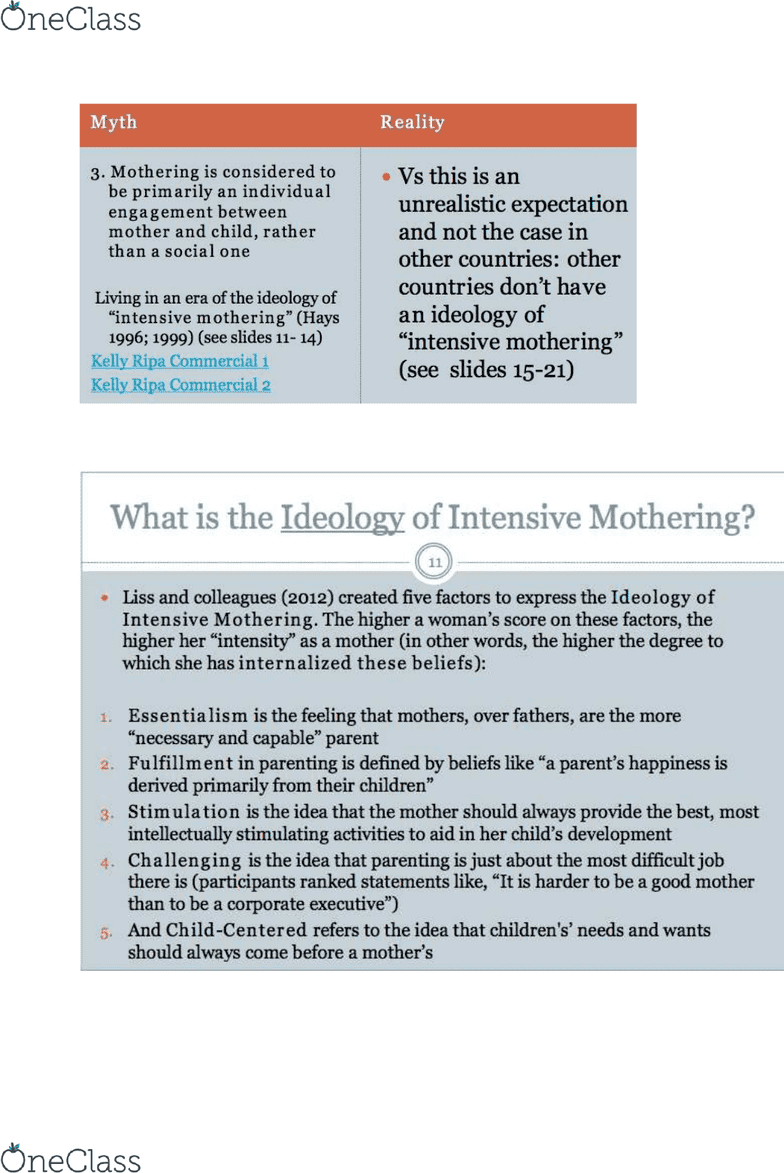 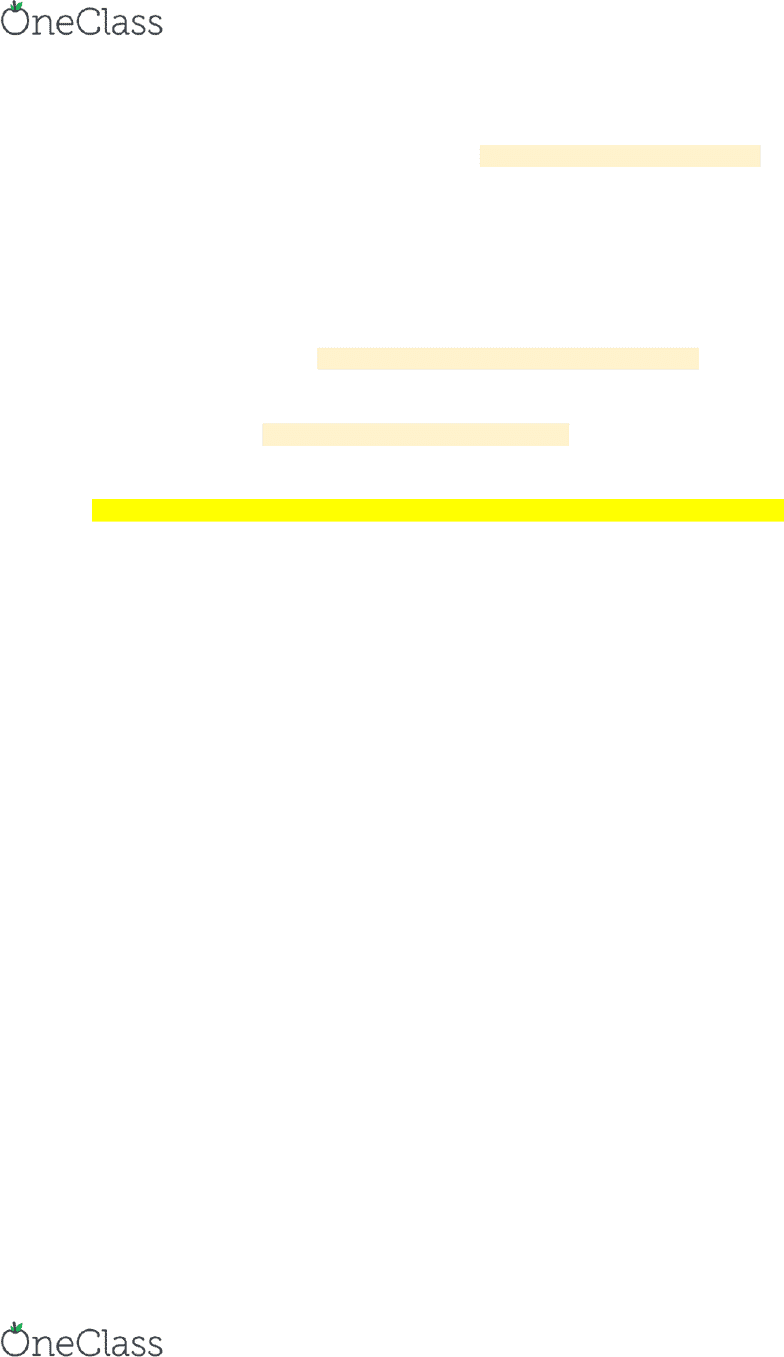 ● A Research Aside: A recent study shows that internalizing some of these beliefs of
intensive mothering, is correlated with negative mental health outcomes for women
(Rizzo et al 2013)
France does not hold the same view of intensive mothering
● According to the French scholar Pascale Pontoreau, the “concept of a good mother did
not exist” in France traditionally.
● No child-centric view of caretaking
● France has the highest birth rate in Europe vs. NA dropping birth rate
○ (1) Perhaps government sponsored supports for parents, that help women
reconcile their working and family lives, such as generous maternity leave, good
childcare for kids under 3, etc.
○ (2) a nonchalant approach to motherhood means women are not limited to the
identity of mother (Badinter 2010)
Intensive Mothering is a cultural ideology of childcare (socially constructed)
Childrearing among Murik people of Papua New Guinea
● Compare “individual/intensive mothering” with “shared mothering”
● “Mothering” is not just done by the mother, but by multiple caregivers
● What is “mothering” in this society? Instead of babysitting
○ (1) nurturing of children
○ (2) protection of children
○ (3) teaching of children
● Why is “mothering" shared? Because women work and work responsibilities may not be
accomplished with children
● Work responsibilities is as important as mothering responsibilities
It takes a village to raise a child
● Humans are Cooperative Breeders
○ Species with allomothering assistance in both the care and provisioning of young
GCPP p. 303-310: Rethinking Caribbean Families: Extending the Links by Mary
Chamberlain
● Approximately 30 to 50 percent of African Caribbean families are female-headed
households
● Non-nuclear families were thought to be deviant structures
○ Detrimental to well-being of family members
● “Economic Necessity” perspective: Female headed households (by mothers or other
female kin) were a response to Poverty/ Unstable Wages/ Migration by men
○ Maximizing scarce resources
● Role of grandparents, in particular grandmothers & sometimes other family members
(“child shifting”) in “growing” children p.305-306 & Case 2 in Rethinking Caribbean
Families
find more resources at oneclass.com
find more resources at oneclass.com
Unlock document