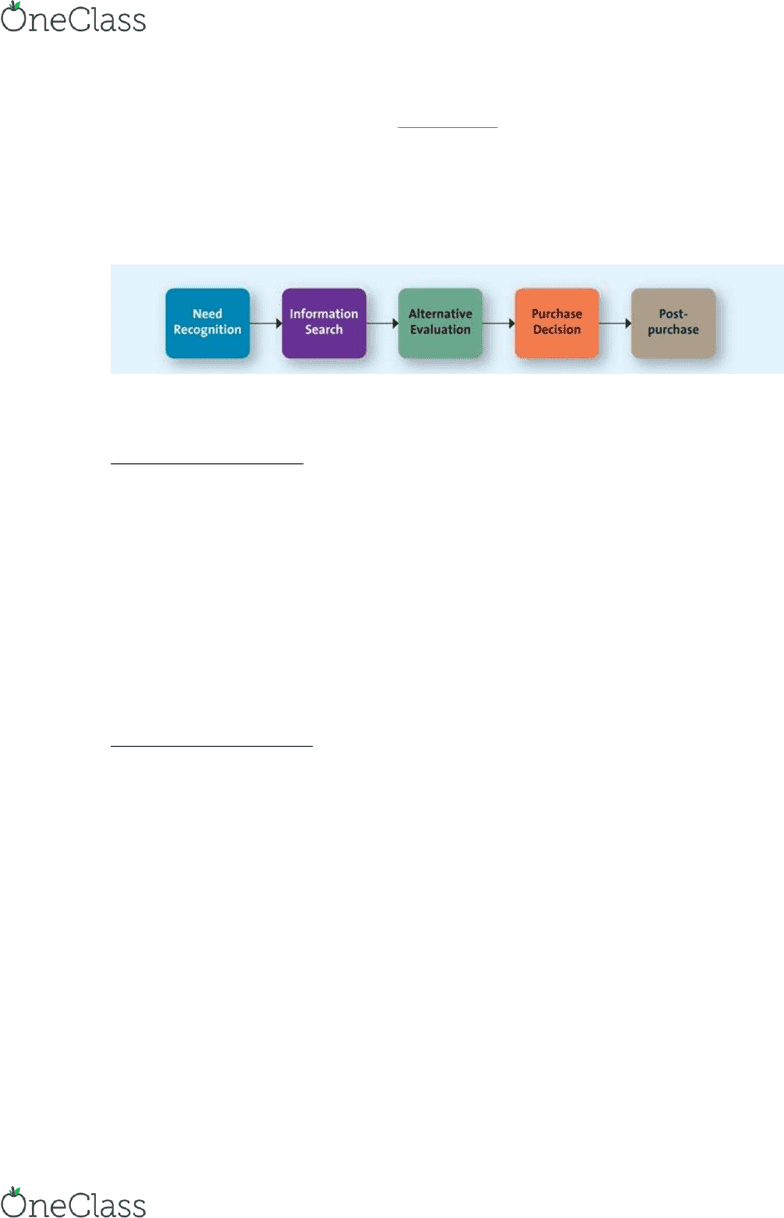 CHAPTER 5
Marketers who can recognize customers’ needs even before customers articulate those
needs could acquire strategic competitive advantage over competitors.
The Consumer Decision Process
• The consumer decision process model represents the steps that consumers go
through before, during, and after making purchases.
Step 1: Need Recognition
• Need recognition is the beginning of the consumer decision process; occurs when
consumers recognize they have an unsatisfied need and want to go from their
actual, needy state to a different, desired state.
o Functional Needs
▪ Functional needs pertain to the performance of a product or
service.
o Psychological Needs
▪ Psychological needs pertain to the personal gratification
consumers associate with a product or service.
• A key to successful marketing is determining the correct balance of functional and
psychological needs that best appeals to the firm's target markets.
Step 2: Information Search
• The second step, after a consumer recognizes a need, is to search for information
about the various options that exist to satisfy that need.
• Regardless of the required search level, there are two key types of information:
internal and external.
o Internal search for information occurs when the buyer examines his or her
own memory and knowledge about the product or service, gathered
through past experiences.
o External search for information occurs when the buyer seeks information
outside his or her personal knowledge base to help make the buying
decision.
▪ Factors Affecting Consumers’ Search Processes
• The perceived benefits versus perceived costs of search.
Is it worth the time and effort to search for information
about a product or service?
find more resources at oneclass.com
find more resources at oneclass.com
Unlock document

The purpose behind much of advertising is to influence each of the five Consumer Decision Making process (Problem Recognition, Information Search, Evaluation of Alternatives, Product Choice (i.e. Purchase) and Outcomes (i.e. Postpurchase). Each stage of the Consumer Decision Making process has techniques that help consumers to manage the stage and then move onto the next one successfully. Eventually, the consumer moves to purchase (where we get excited to make the sale) but don't underestimate how important the last stage (post purchase) is to making additional sales in the future. Below are guidelines that show basic techiniques used to target and manipulate each Consumer Decision Stage through advertising.

Below are some issues that you will want to consider as you evaluate each of the five chosen advertisements. Please remember that your goal is not simply to answer these questions, but to provide insights into the consumerâs decision making process that you feel would be useful to a marketing manager (e.g., if an ad triggered the consumerâs decision to purchase the product). Other areas to comment on would be level of involvement, etc.

*Be aware that there is a helpful power point demonstration in a conference opened this week marked as "Advertising and the Consumer Decision Process (Ad Examples)". This is informative only and does not need to be commented on.

First, show the ad in a slide and then follow-up with a slide which explains (bullet form) why the ad slide targets the Consumer Decision Making process stage. ALL ADS MUST BE STILL ADS (NO VIDEOS or LINKS). Therefore the ad MUST be able to be copied and pasted within the power point slide (NO LINKS). Here is the format of the presentation:

Slide 3: Explanation why it addresses this stage

Slide 5: Explanation why it addresses this stage

Slide 7: Explanation why it addresses this stage

Slide 9: Explanation why it addresses this stage

Slide 11: Explanation why it addresses this stage

In the conclusion of the slide presentation choose which ad is most effective (overall) and why.

-Include a cover page and bibliography of sources. Outside sources (esp. learning resources from weeks covered) are encouraged to be cited and used.

-Organize and utilize the headings given above.

-No more than 2 grammatical/spelling errors are allowed (please proof before submitting).

-Text is required to be in Times Roman, 12 pt font, double space the text.

- Keep voice in business third person. Do not include visuals in text analysis, if need to add create an appendix and refer your reader to such.

With respect to consumer behavior, one's attitudes, learning, and perceptions would be

In Maslow's hierarchy of needs,

Which of the following is not a characteristic that distinguishes organizational markets from consumer markets?

In the organizational buying process, a triggering event such as announcement of the availability of a new product whose use could improve the company's market performance is referred to as

Goods purchased by the ultimate consumer for personal use are called

A particular purchasing agent might allow some salespeople to see the engineers responsible for developing product specifications but not allow others the same privilege. In the buying center, this purchasing agent is filling the role of

"Our prices are the lowest, we guarantee it" is an example of a positioning strategy based on the product's

When consumer demand for personal computers affects computer manufacturers' demand for computer chips, this situation is known as

Which of the following is a personal factor in consumer bahavior?

Which of the following would be most likely to break through a person's perceptual screen?

A controversial technique of subconscious communication, aimed at circumventing the perceptual screens, is called

The institutional market does not include which of the following?

Advertising for smoke alarms, air bags and life insurance typically uses which of Maslow's levels of needs to appeal to consumers?

One type of buying center role is that of the

Manufacturing firms that convert to automated factory systems must purchase equipment that they have never bought before, such as robots and computers. This buying situation is called

A commonly used basis for segmenting consumer markets is

The business market is also known as the

Which of the following consumer problem-solving behaviors requires the least effort?

The person who joins a local bowling league for the social interaction, even if he or she is a novice bowler, is probably trying to satisfy his or her

Red Ryder Industries markets rodeo and horse riding supplies specifically to women. This is an example of

The slogan "the graying of America" describes the trend

Internal search in the consumer decision process may include

The process of dividing the total market into several smaller, homogeneous groups is called