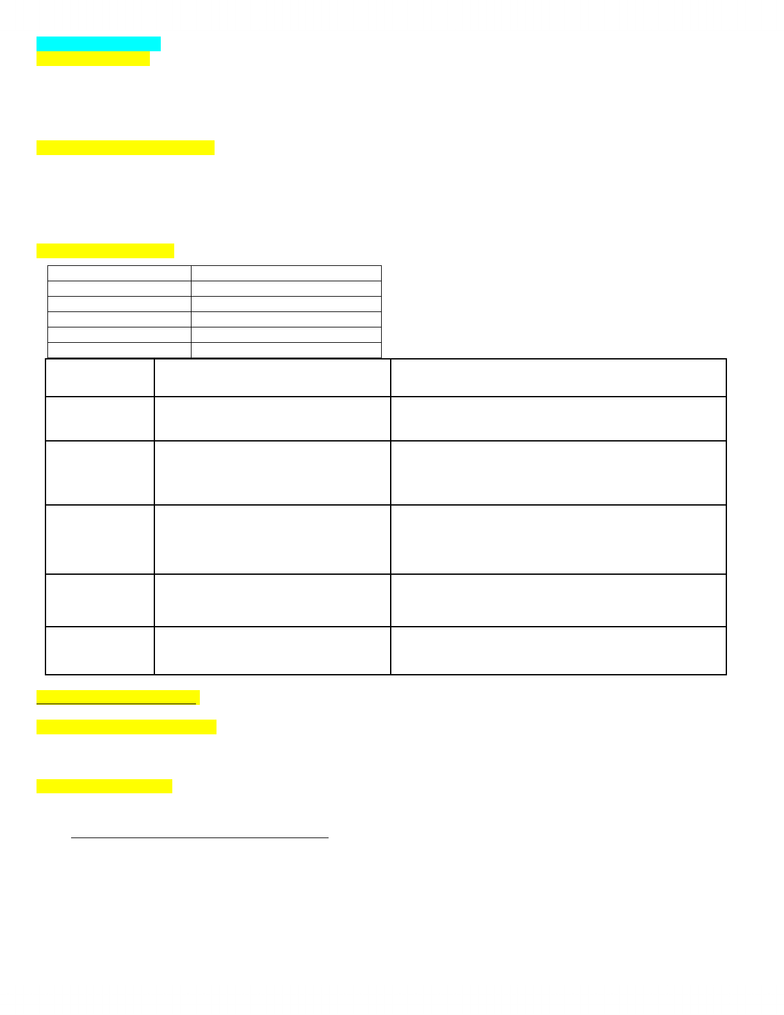 Chapter 9: Leadership
What is Leadership?
• The influence that a particular individuals exert on the goal achievement of others in an organizational context
• An influence relationship among leaders and followers who intend real changes and outcomes that reflect their shared purposes.
Leaders cannot exist without followers
• Some people in organizations occupy formal or assigned leadership roles with authority to direct employees
• Individuals might also emerge to occupy informal leadership roles. They do not have formal authority.
Why is leadership so important?
• Subordinates who work for managers with good leadership skills will generally:
o Know how to achieve higher levels of performance
o Want to achieve higher levels of performance
o Like their jobs
o Feel affectively committed to their organizations
o Want to stay in the organization
New reality for leadership:
(Are leaders born or made?)Search for leadership traits: the
assumption that those who become leaders and do a goal job of it
possess a special set of traits that distinguish them from others.
Traits associated with leadership effectiveness: intelligence,
energy, self-confidence, dominance, motivation lead, emotional
stability, honesty & integrity, need for achievement
Management
Leadership
Direction
Planning & budgeting
Keeping eye on bottom line
Creating vision & strategy
Keeping eye on horizon
Alignment
Organizing & staffing
Directing & controlling
Creating boundaries
Creating shared culture & values
Helping other grow
Reducing boundaries
Relationships
Focusing on objects – producing/selling
goods/services
Based on position power
Acting as boss
Focusing on people- inspiring & motivating followers; Based
on personal power; Acting as coach, facilitator, servant
Personal
qualities
Emotional distance; talking; insight into
organization
Emotional connections, listening, nonconformity, insight into
self
Outcomes
Maintains stability; creates culture of
efficiency
Creates change and a culture of integrity
Research on leadership traits: 3 of the big five dimensions of personality (agreeableness, extraversion, openness to experience) are
related to leadership behaviors. Intelligence is related to leadership but not as strongly as previously thought
Limitations of the trait approach
• Do traits make the leader of does the opportunity for leadership produces the traits?
• Does not tell us what leaders do to influence others successfully
• It does not take into account the situation in which leadership occurs
The behaviour of leaders
• The most involved, systematic study of leadership was begun at Ohio State University in the 1940s. Employees described their
superiors along a number of behavioural dimensions
• The results revealed two basic kinds of behaviour: ( both contribute positively to employee’s motivation, job satisfaction and
leader effectiveness; the relatively importance of both varies according to the nature of the leadership situation.)
o Consideration
• The extent to which a leader is approachable and shows personal concern and respect for employees
• The considerate leader is friendly and egalitarian (平等主义的), expressed appreciation (表示赞赏认同)and support,
and is protective of group welfare
• Consideration is more strongly related to follower satisfaction, motivation, and leader effectiveness.
o Initiating structure
• The degree to which a leader concentrates on group goal attainment
• Initiating structure is slightly more strongly related to leader job performance and group performance
OLD PARADIGM
NEW PARADIGN
Stability
Changes /crisis management
Control
Empowerment
Competition
Collaboration
Uniformity
Diversity
Self-cantered
Higher ethical purpose
Unlock document 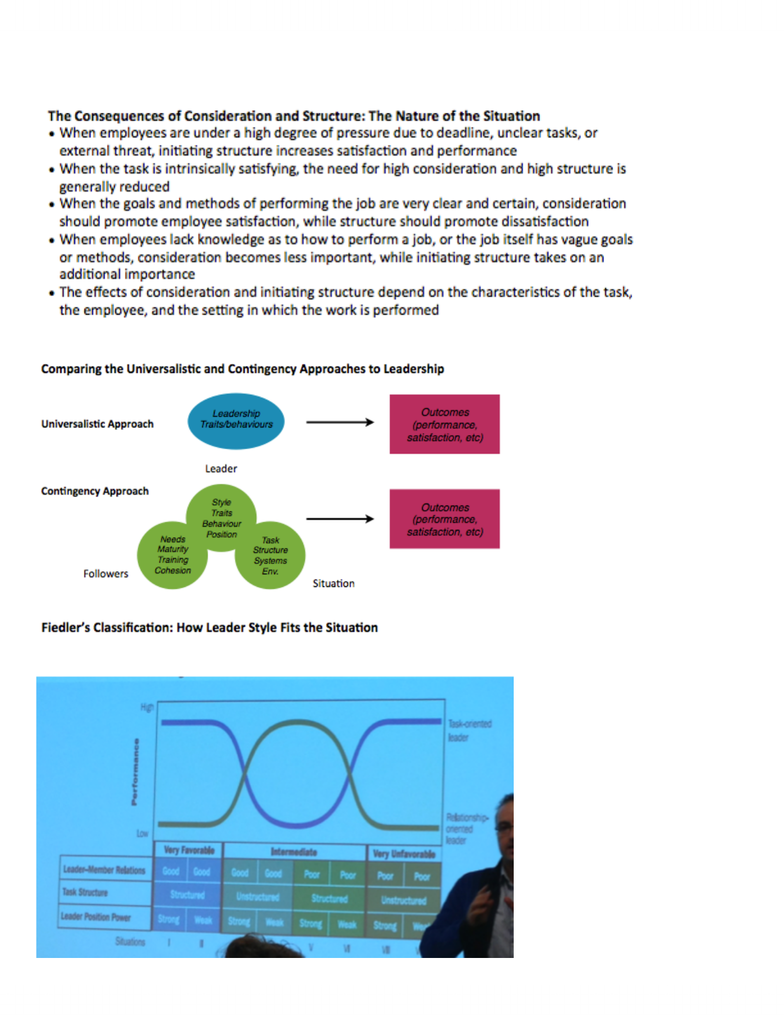 • The structuring leader:
! Clearly defines and organizes her role and the roles of followers
! Stresses standard procedures and schedules the work to be done
! Assigns employees to particular tasks
Unlock document 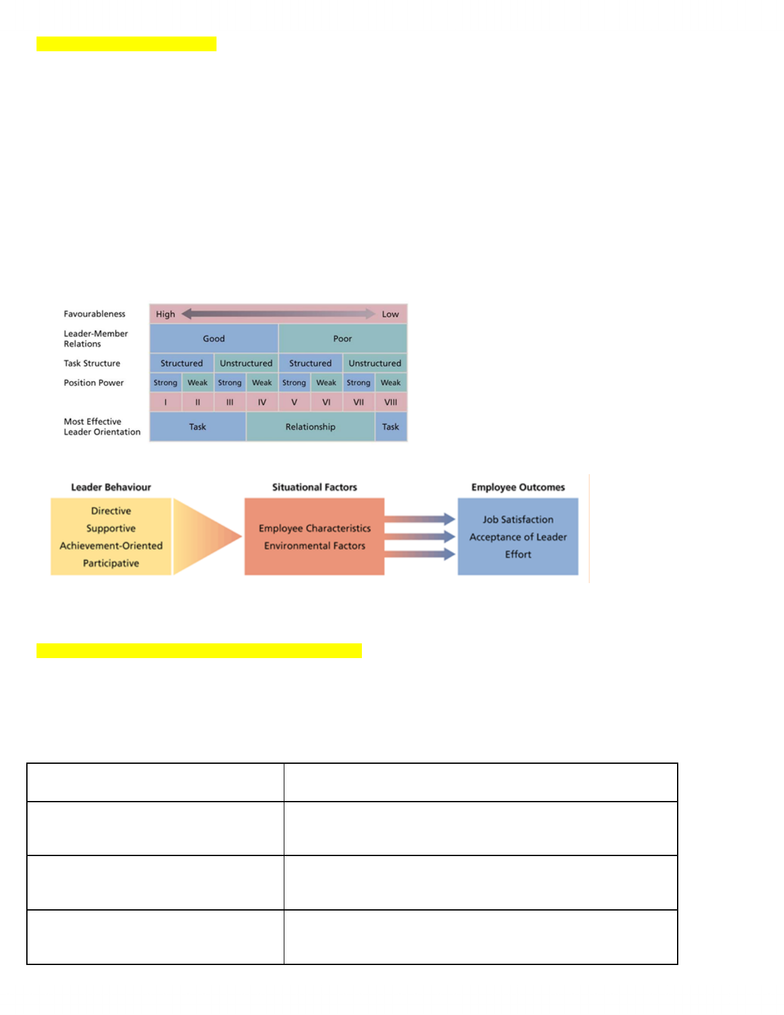 Situational theories of leadership
• The situation refers to the setting in which influence attempts occur
• The basic premise - the effectiveness of a leadership style is contingent on the setting
• The situational theories of leadership that are among the best known and most studied
1. Fiedler's contingency theory
• Leader success is contingent upon (depends on) the extent to which the situation is favourable for exerting influence
o Situational favourability:
• Leader-member relations: when the relationship between the leader and the group members is good, the leader is in a
favourable situation to exert influence. A poor relationship could lead to sabotage or insubordination.
• Task structure: when the task at hand is highly structured, the leader should be able to exert considerable influence on
the group.
• Position power: the formal authority granted to the leader by the organization to tell others what to do. The more
position power, the more favourable is the leadership situation.
• Some situations are more favourable than others, and these situations require different orientations on the part of the leader
o Either a task or relationship. Something: @
Least preferred co-worker is a current or past co-worker with whom a leader has had a difficult time accomplishing a task.
Predictions of leader effectiveness from Fiedler's Contingency theory of leadership (exhibit 9.2)
The Path-Goal Theory of Leadership (exhibit 9.3)
• The effective leader forms a connection between employee goals and the organizational goals. To provide job satisfaction and
leader acceptance, leader behaviour must be perceived as immediately satisfying or as leading to future satisfaction (p.269 for more
information on the diagram)
Participative Leadership: Involving Employees in Decisions
• Participative Leadership means involving employees in making work-related decisions
• Leaders can vary in the extent to which they involve employees in decision making
• Minimally, participation involves obtaining employee opinions before making a decision.
• Maximally, it allows employees to make their own decisions within agreed-on limits
• Participation can involve individual employees or the entire group of employees
• The choice of an individual or group participation strategy should be tailored to specific situations
• Vroom and Jago look at a model of participation (see book p. 300)
Path clarification
Increase rewards
Leader defines what follower must do to
attain work outcomes
Leader learns follower’s needs
Leader clarifies follower’s work role
Leader matches follower’s needs to rewards if work outcomes are
accomplished
Follower has increased knowledge &
confidence to accomplish outcomes
Leader increases value of work outcomes for follower
Unlock document