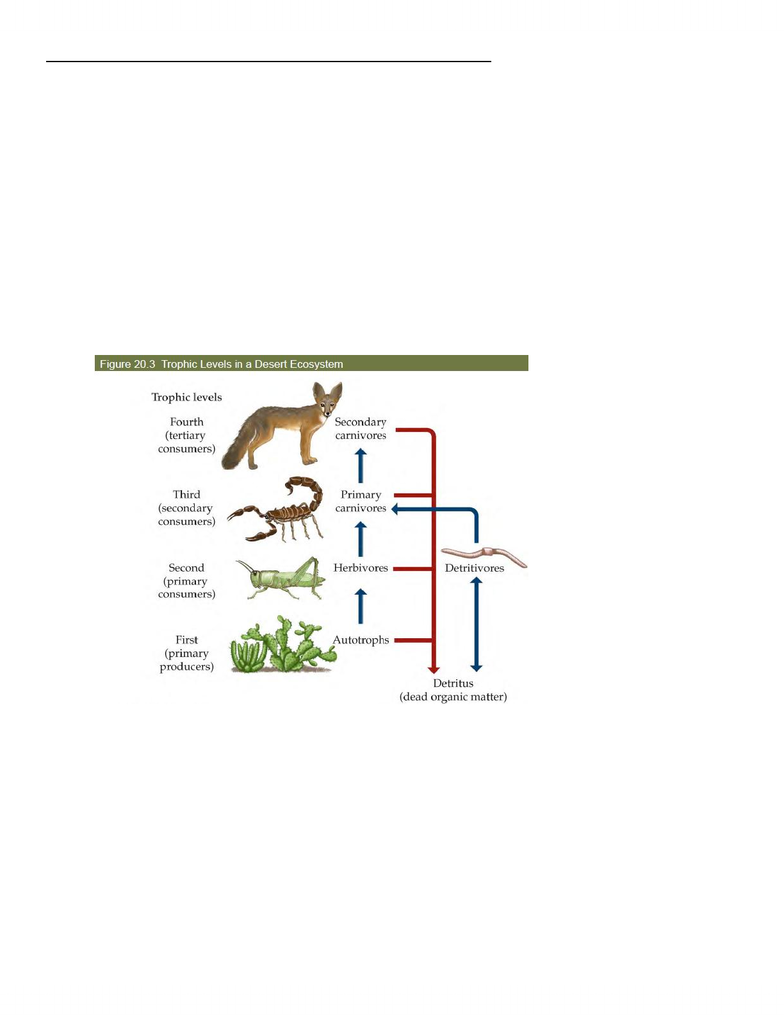 1
BIOB50Winter2012 Lecture 16/20: Energy Flow and Food Webs (Chapter 20)
Introduction
o What links organisms together in the context of ecological functioning is their trophic interactions – what they
eat and what eats them
o The influence of an organism on the movement of energy and nutrients through an ecosystem is determined by
the type of food it consumes, and by what consumes it
Feeding Relationships
o Trophic levels describe the feeding positions of groups of organisms in ecosystems
o Each feeding category, called a trophic level is based on the number of feeding steps by which it is separated
from autotrophs
o The first trophic level consists of autotrophs (primary producers)
o Figure 20.3 Trophic Levels in a Desert Ecosystem – each trophic level is characterized by the number of feeding
steps by which it it removed from autotrophs (primary producers)
o detritus is considered
part of the first trophic level and
detritivores are grouped with
herbivores in the second trophic
level
o All organisms not
consumed by other organisms
end up as detritus
o Some organisms do not conveniently fit into trophic levels
o Omnivores feed at multiple trophic levels
o Example: coyotes are opportunistic feeders, consuming vegetation, mice, other carnivores, and old leather
boots
o All organisms in an ecosystem are either consumed by other organisms or enter the pool of dead organic matter
(detritus)
o In terrestrial ecosystems, only a small portion of the biomass is consumed, and most of the energy flow passes
through the detritus
Unlock document 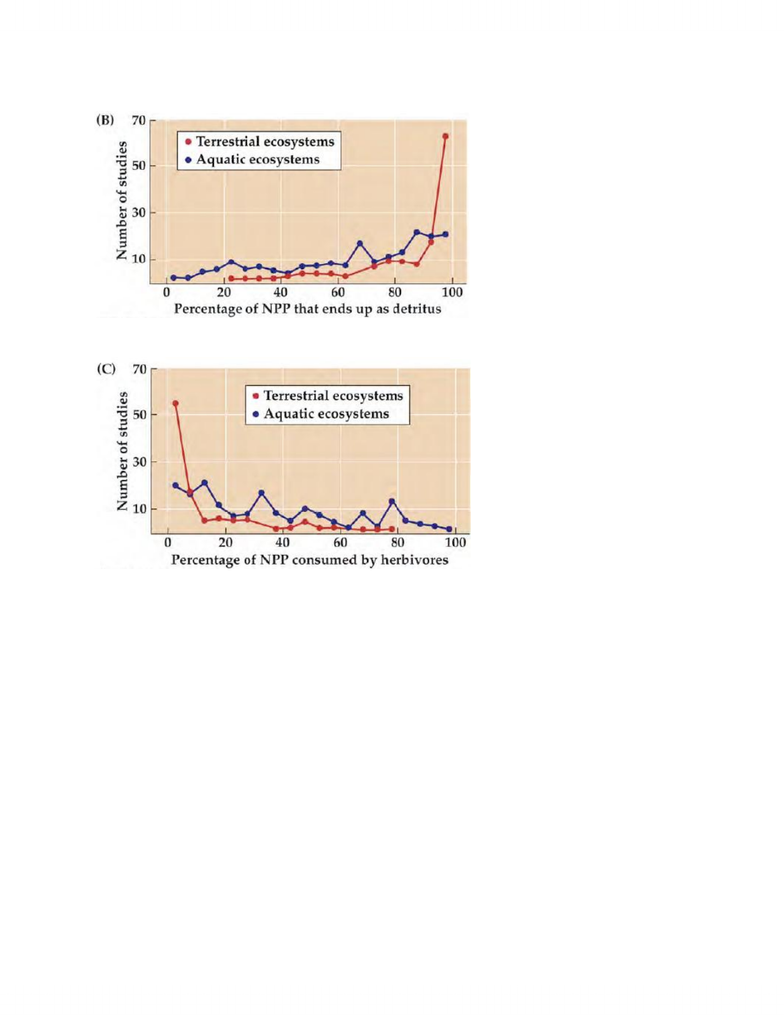 2
o Figure 20.4 Ecosystem Energy Flow Through Detritus – B) numerous studies of both terrestrial and aquatic
ecosystems have found that in most ecosystems, most of the NPP ends up as detritus – C) relatively little of the
the NPP in an ecosystem is consumed by herbivores
o more than 50% of NPP ends up as
detritus the up and down trend is stronger
for aquatic ecosystems – in most of the
studies, only a small proportion of NPP is
consumed by herbivores
o Much of the input of detritus into streams, lakes, and estuarine ecosystems is derived from terrestrial organic
matter
o Those external energy inputs are called allochthonous inputs
o Energy produced by autotrophs within the system is autochthonous energy
Energy Flow among Trophic Levels
o The amount of energy transferred from one trophic level to the next depends on food quality and consumer
abundance and physiology
o A trophic pyramid is a graphical representation of trophic relationships
o Energy will decrease with each trophic level
o Figure 20.5 Trophic Pyramid Schemes
Unlock document 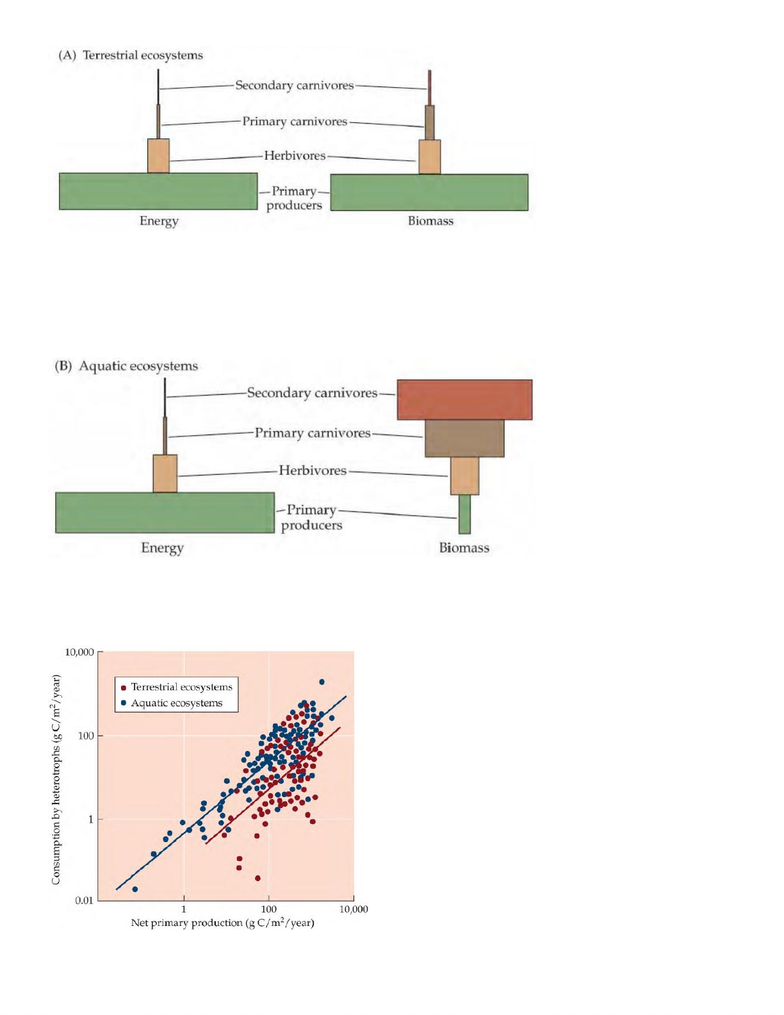 3
o In terrestrial ecosystems, energy and biomass pyramids are usually similar because biomass is closely associated
with energy production
o In aquatic ecosystems, the biomass pyramid is inverted  the primary producers are phytoplankton with short
life spans and high turnover
o Figure 20.5 Trophic Pyramid Schemes
o Figure 20.6 Consumption of Autotrophs Biomass is Correlated with NPP – the amount of autotroph biomass
consumed increases with increasing NPP in both terrestrial and aquatic systems  amount is higher in aquatic
ecosystems than in terrestrial ecosystems
Unlock document