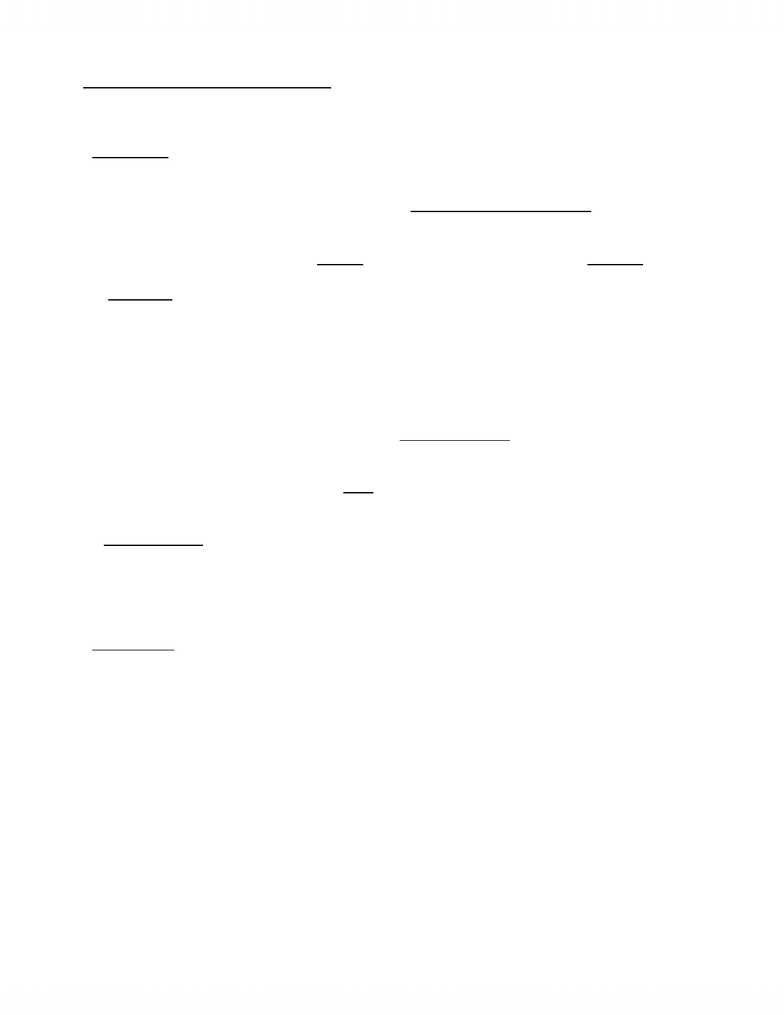 1
BIOB50Winter2012 Lecture 14, Chapter 15
What Are Communities?
 Communities are groups of interacting species that occur together at the same place and time
 Interactions among multiple species give communities their character and function.
 They make communities into something more than the sum of their parts.
 In practical terms, defining a community requires using biological or physical guidelines.
 Figure 15.3: Defining Communities. Ecologists often delineate communities by their physical or
biological characteristics.
 A community may be defined by the physical characteristics of its environment. A physically defined
community might encompass all the species in a sand dune, a mountain stream, or a desert.
 A biologically defined community might include all the species associated with a kelp forest, a
freshwater bog, or a coral reef. A common species, such as kelp, wetland plants, or coral, is the basis for
the community delineation.
 Counting all the species in a community is difficult to almost impossible, especially if small or relatively
unknown species are considered.
 Ecologists usually consider a subset of species when they define and study communities.
 Figure 15.4: Subsets of Species in Communities. Ecologists may use subsets of species to define
communities.
 One way of subdividing a community is based on Taxonomic Affinity. Example, a study of a forest
community might be limited to all the bird species within that community (All the bird species grouped by
taxonomic activity).
 Another useful subset of a community is a Guild, a group of species that use the same resources, even
though they might be taxonomically different. For example, some birds, bees, and bats feed on flower
pollen, thus forming a guild of pollen-eating animals.
 A Functional Group is a subset of a community that includes species that function in similar ways, but do
not necessarily use the same resources. For example, mosquitoes and aphids both have stylet
mouthparts, although one feeds on plant phloem. Especially in the case of plants, some functional groups
use similar resources; for example, nitrogen-fixing plants function similarly and also use the same set of
resources.
 Food webs allow ecologists to organize species based on their trophic or energetic interactions.
 Trophic Levels are groups of species that have similar ways of obtaining energy (e.g., primary producers-
lowest trophic level, primary consumers).
 Figure 15.5: Food Webs and Interaction. Food webs describe trophic interactions among species.
Interaction webs include both trophic interactions (vertical arrows) and non-trophic (horizontal)
competitive and positive interactions.
Unlock document 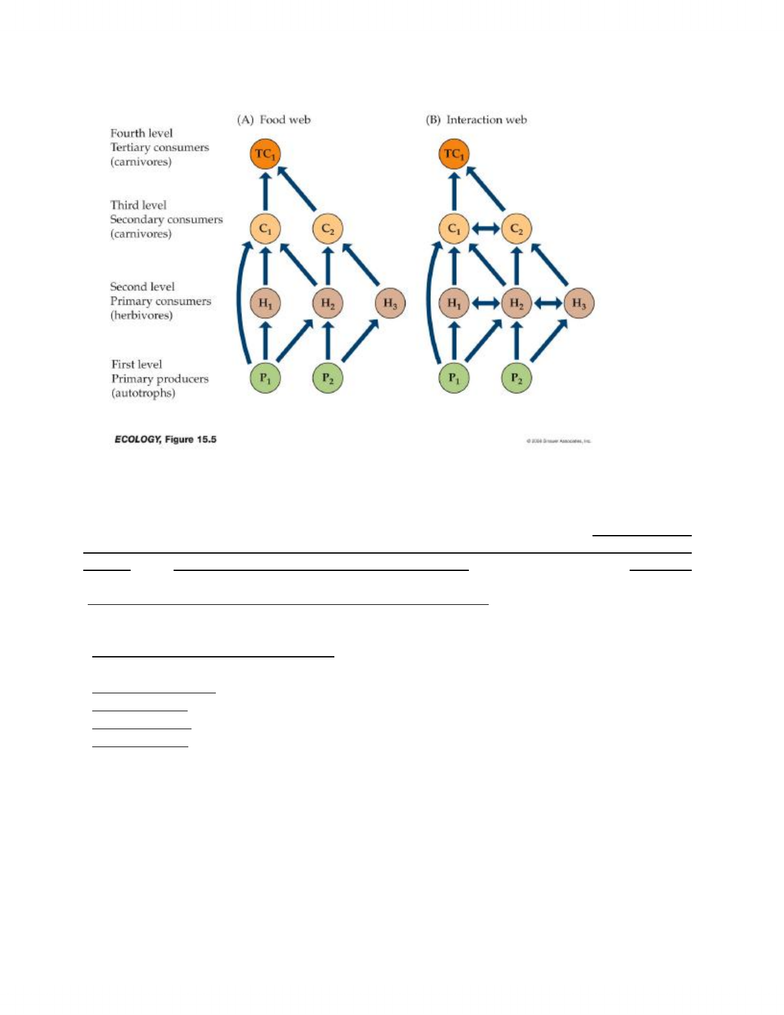 2

 The lowest trophic level contains primary producers, which are autotrophs such as plants. The primary
producers are fed on by organisms at the second level, the primary consumers, which are herbivores. The
third level contains secondary consumers, which are carnivores, which are fed on in turn by tertiary
consumers, also carnivores.
 In food webs, trophic levels may cause some confusion for reasons which may include: some species can
span two trophic levels (corals can be classified as herbivore or carnivore due to symbiotic algae they
contain), some species change their feeding status as they mature, and some species may be Omnivores
(feeding on more than one trophic level). Lastly, food webs do not include non-trophic interactions
(horizontal arrows, such as competition and some positive interactions)
Community Structure
 Species Diversity and Species Composition are important descriptors of community structure.
 Communities vary significantly in the number of species they contain.
 Community Structure is the set of characteristics that shape communities.
 Species Richness is the number of species in a community
 Species Evenness is the relative abundances compared with one another
 Species Diversity combines species richness and species evenness.
 Figure 15.6: Species richness and species evenness. The two hypothetical mushroom communities
shown each have the same number of species (species richness), but different relative abundances
(species evenness). Community A has lower species evenness than community B, thus, species diversity
is lower in community A.
 In community A, the abundance of one species (the yellow mushrooms) is high relative to the other
species, so this community has low species evenness. In community B, each species has the same
abundance, so this community has high species evenness.
Unlock document 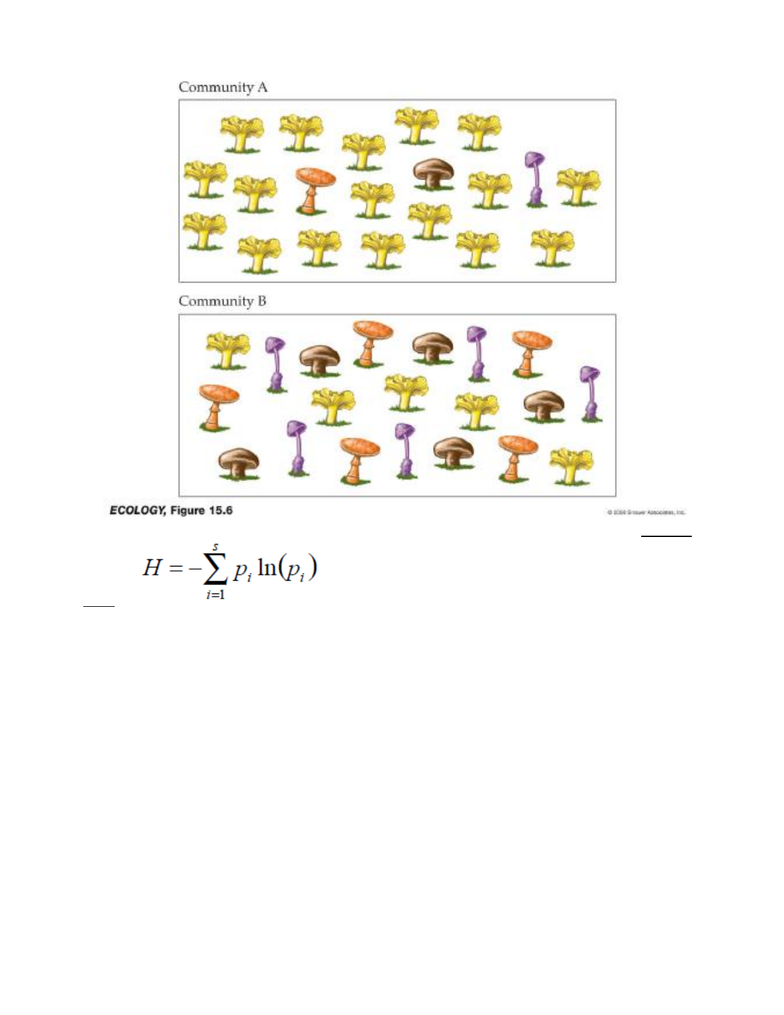 3

 There are several quantitative species diversity indices. The one most commonly used is the Shannon
Index: where Pi = the proportion of individuals in the ith species and
s = number of species in the community. H = the Shannon index value. ln = the natural logarithm.
Unlock document