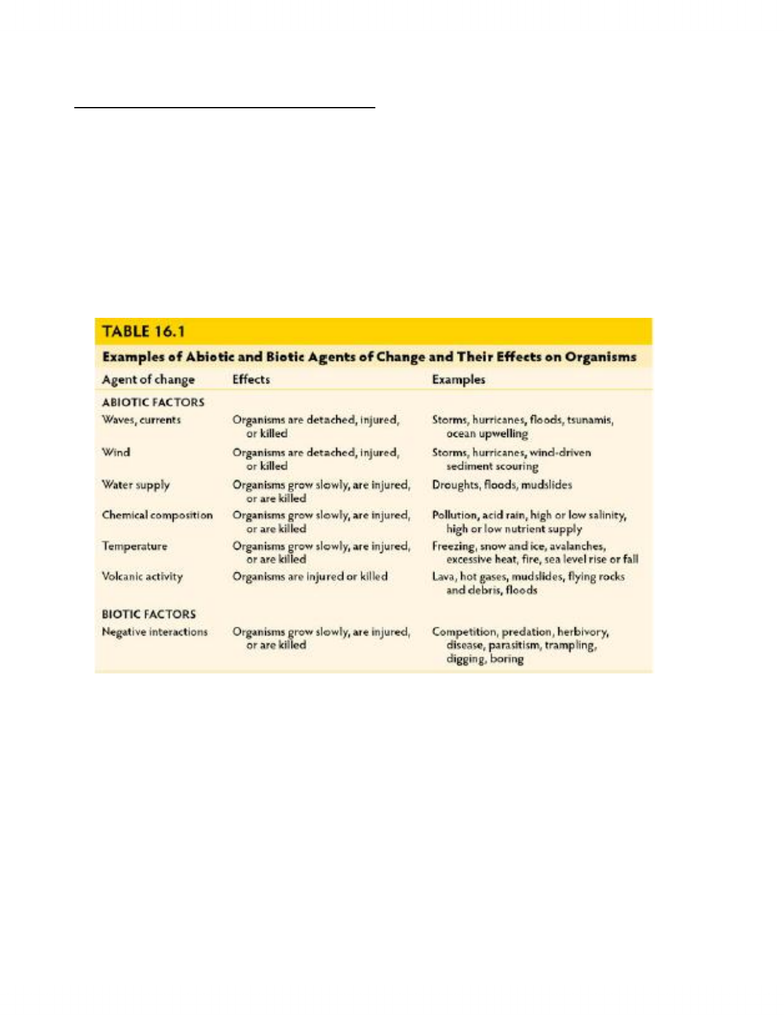 1
BIOB50QWinter2012Lecture 15 Community Change
Agents of Change
 Agents of change act on communities across multiple temporal and spatial scales.
 Consider a coral reef community in the Indian Ocean. If you look back at it over the last few decades,
you would observe slow and subtle changes, as well as catastrophic ones.
 Figure 16.3: Change Happens. Coral reef communities in the Indian Ocean have experienced
significant changes over the last few decades. The agents of change have been subtle and catastrophic,
natural and human-caused. Species interactions, such as competition, predation, and disease, can case
the gradual replacement of species over time. Changes in abiotic conditions, such as sea level and water
temperature, can cause physiological stress, coral bleaching, and eventually mortality. Catastrophic
disturbances, such as tsunamis, can cause massive injury and death in coral reefs.

Case Study: “Killer Algae!”
 In the 1980s, an unusual alga (caulerpa taxifolia) was found in the Mediterranean Sea. It was a native of
warm Caribbean waters (18—20 degrees). It had never been found in colder waters (12—13 degrees), nor
in such densities. French marine biologists calculated its rate of spread at 1 hectare in 5 years.
Unlock document 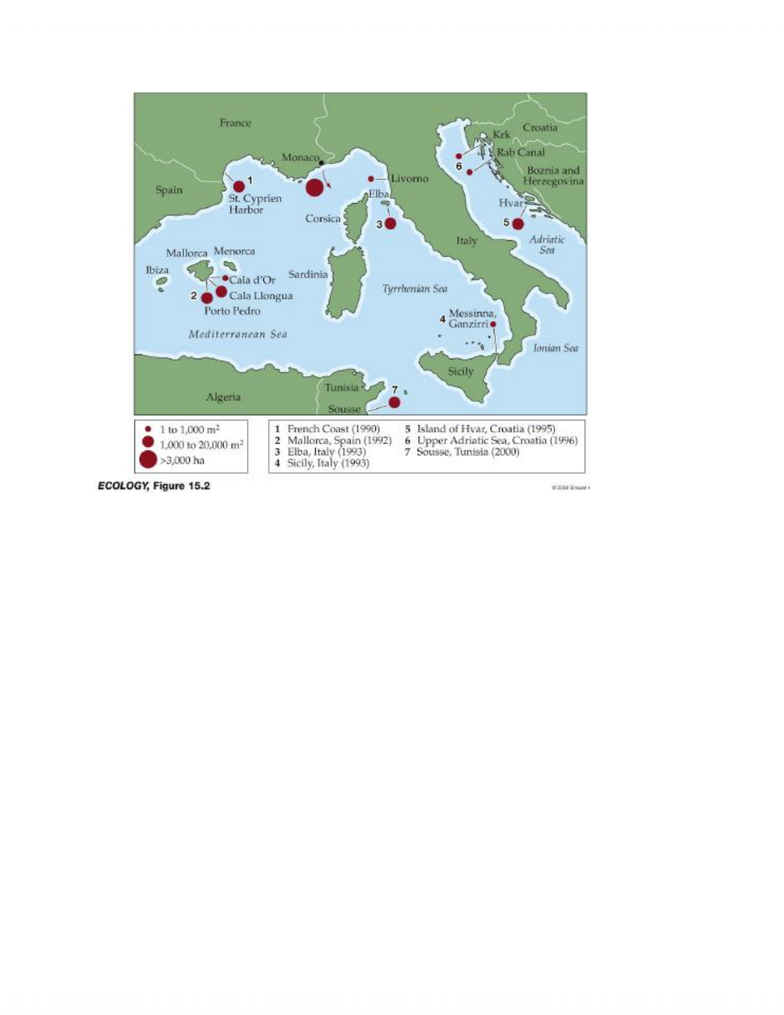 2

 Caulerpa was unintentionally released by the oceanographic museum of Monaco in 1984. By 2000,
Caulerpa spread as far as Tunisia.
 The alga originated at the Oceanographic Museum of Monaco in 1984.
 A cold-resistant strain of Caulerpa had been sent to them from a zoo in Germany, to use as a backdrop
for tropical fish aquaria.
 The museum released Caulerpa in the process of cleaning tanks, thinking it would die in the cold
Mediterranean.
 The introduction of Caulerpa to the Mediterranean dramatically changed the way native species
interacted, and thus the structure and function of the native communities.
 Sea grass meadows dominated by Posidonia oceanic were overgrown by Caulerpa. The sea grass
meadows support a multitude of species.
 Caulerpa acts as an ecosystem engineer, accumulating sediments around its roots more readily than
Posidonia, which changes the invertebrate community. There is also a significant drop in the numbers and
sizes of fish after Caulerpa invade, suggesting the habitat is no longer suitable.
Case Study: A natural Experiment of Mountainous Proportions
 Mt. St. Helens on May 18, 1980. Devastation created new habitats devoid of any living organisms.
 Organisms on Mount St. Helens were scorched, pounded by pumice, covered in mud, and blown down
by eruption. The eruption had different effects on the geology of the mountain at different locations,
creating many new habitats (natural experiments).
Unlock document 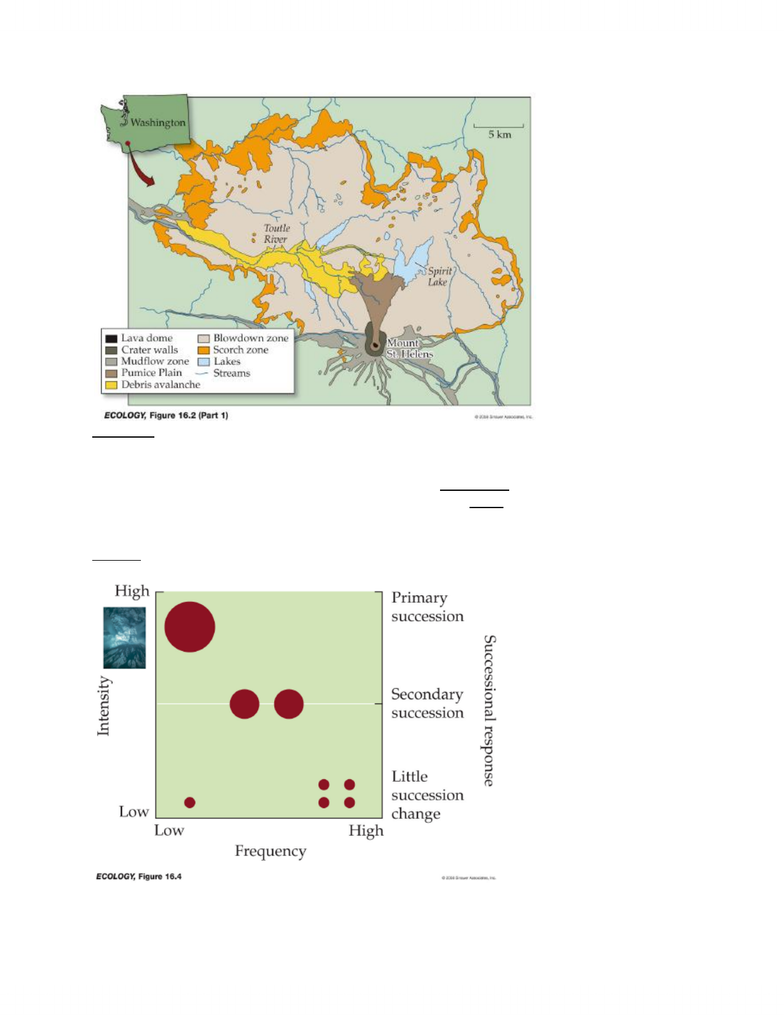 3

 Succession is the change in species composition in communities over time.
 It is the result of both biotic and abiotic factors. Abiotic factors, in the form of climate, soils, nutrients,
and water, vary over daily, seasonal, decadal, and even 100,000-year time scales.
 Abiotic agents of change can be put into two categories: Disturbance—an event that injures or kills
some individuals and creates opportunities for other individuals. Stress—an abiotic factor reduces the
growth or reproduction of individuals (e.g., temperature increase).
 Abiotic and biotic factors often interact to produce community change.
 Example: An ecosystem engineer causes changes in abiotic conditions that can cause species
replacement. Beavers creating a wetland lead to species replacements.

 Figure 16.4: The spectrum of Disturbance. How much biomass is removed (the intensity of
disturbance) and how often it is removed (frequency of disturbance) can influence the amount of
Unlock document