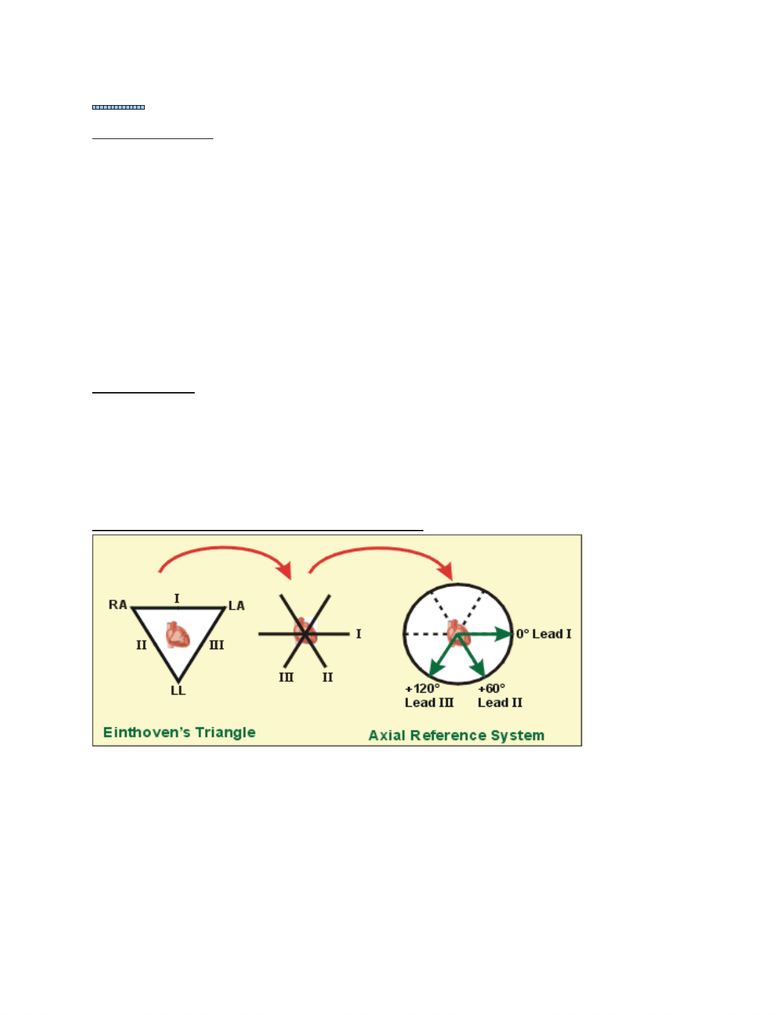 Figure The standard ECG patterns when referencing ECG from the leads
Thiruvarangan
BIOC34 – Lecture II – Electrocardiogram (ECG)
Bipolar Limb Leads
ECG essentially measures surface electricity originating from the heart. As the heart
depolarizes, electrical activity from the heart spreads out to the rest of the body which is then
picked up by the electrodes placed on the body.
•Bipolar ECG limb leads record the voltage between electrodes placed on the wrist and
the arms
•Equilateral triangle surrounding the heart is formed (Einthoven’s triangle)
Standard Bipolar Limb Leads
•Lead I: right arm (-) to the left arm (+)
•Lead II: right arm (-) to the left leg (+)
•Lead III: left arm (-) to the left leg (+)
Einthoven’s Law
In the electrocardiogram, at any given instant, the potential of any wave in lead II is equal to the
sum of the potentials in lead I and III (E = electrical potential; EI + EIII = EII)
•Lead I = ELA – ERA
•Lead II = ELL – ERA
•Lead III = ELL – ELA
Einthoven’s Triangle and the Axial Reference System
•Positive electrode for lead I: 0° relative to the heart
•Positive electrode for lead II: + 60° relative to the heart
•Positive electrode for lead III: + 120° relative to the heart
Deflections or movements of electrical axis above and beyond these different ranges can be
used as diagnostic tools for different diseases.
Unlock document 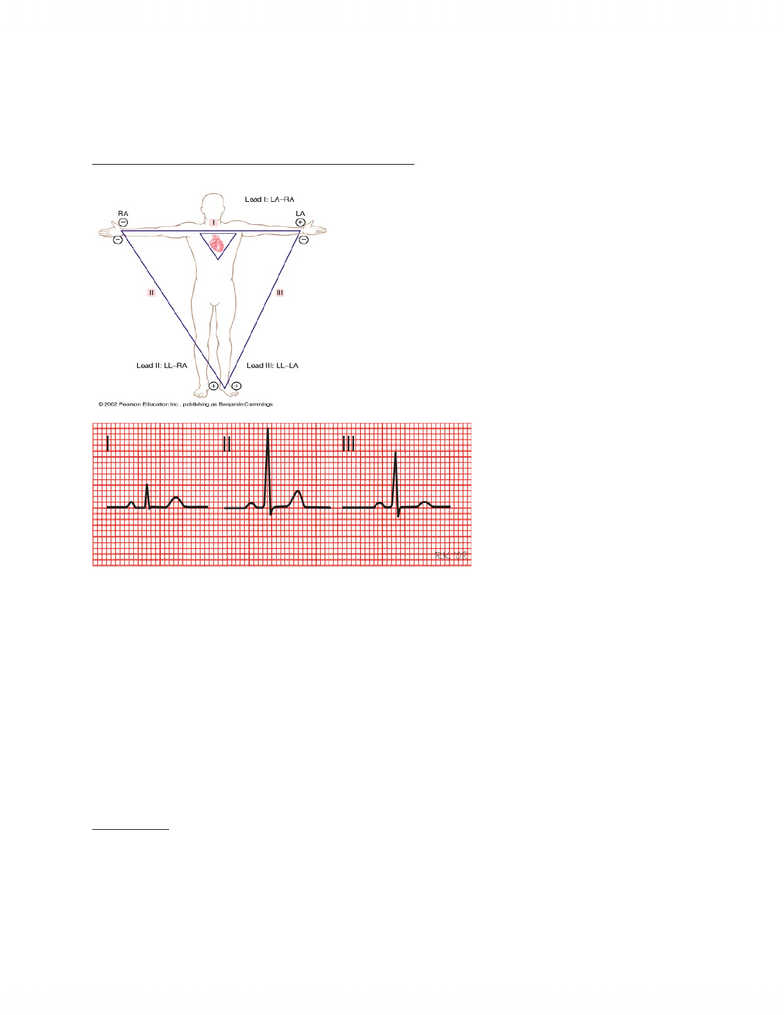 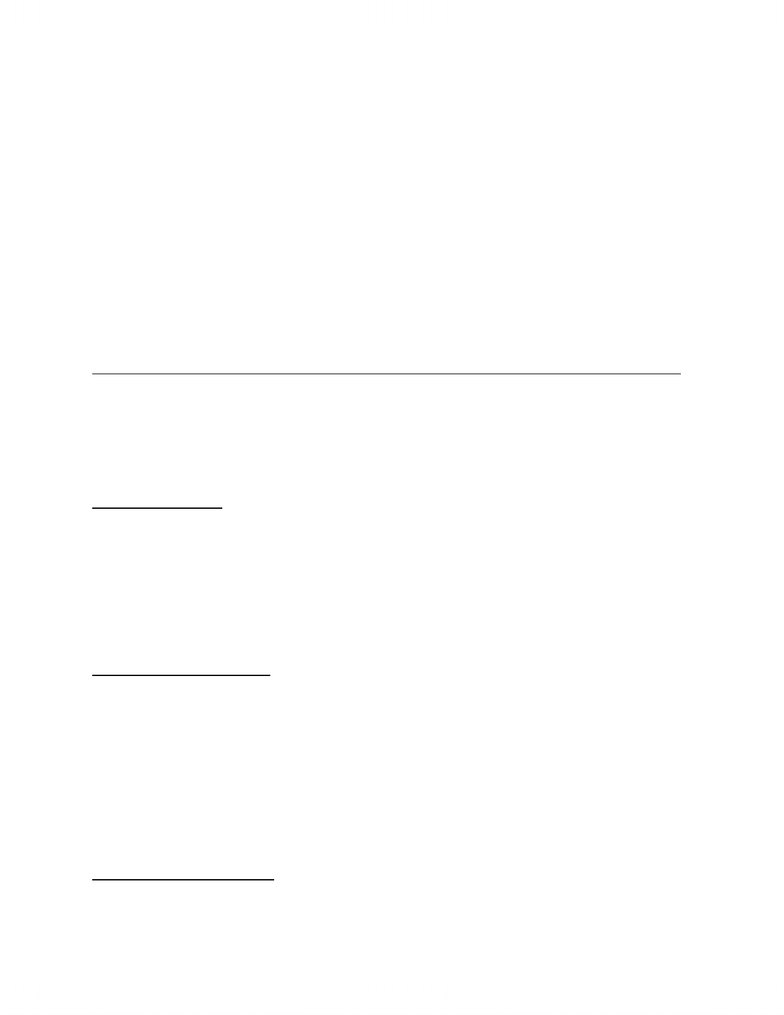 Thiruvarangan
•The first component is a P-wave which is indicative of electrical activity associated with
depolarization of the atria.
•QRS Complex (combination of deflections) predominantly reflects the depolarization of
the ventricles. Also hidden within this, is the repolarization of the atria (hard to distinguish
the two events because the ventricular depolarization is so large).
•T Wave (from Lead II and III) represents the repolarisation of the ventricle.
Phases of the ECG relate to the waves of depolarization and repolarization during a heart beat
•The P Wave is significantly smaller than the QRS Complex because the amount of
electrical generated and detected by the ECG electrodes is proportional to the amount
muscle tissue that is available to depolarize (more muscle in ventricle than atria)
•Any disease state that leads to enlarged ventricles (hypertrophy) will lead to muscle
mass and can affect the magnitude of the QRS complex.
Pacemaker Potential
The early phases of the P-wave reflect the electrical activity traveling from the pacemaker cells
across the surface of the body and being picked up by the ECG electrodes.
Conduction through the atria
As we begin to get the waves of depolarization moving through the atria and we begin to get
phases of depolarization of the muscle, this conduction of electricity through the atria and the
time of this conduction is reflected in the second half of this initial upward swing.
P Wave: Atrial Depolarisation
The P Wave represents pacemaker potentials, transmission of electrical activity through the
atria, and full contraction of the atrial muscle.
Unlock document