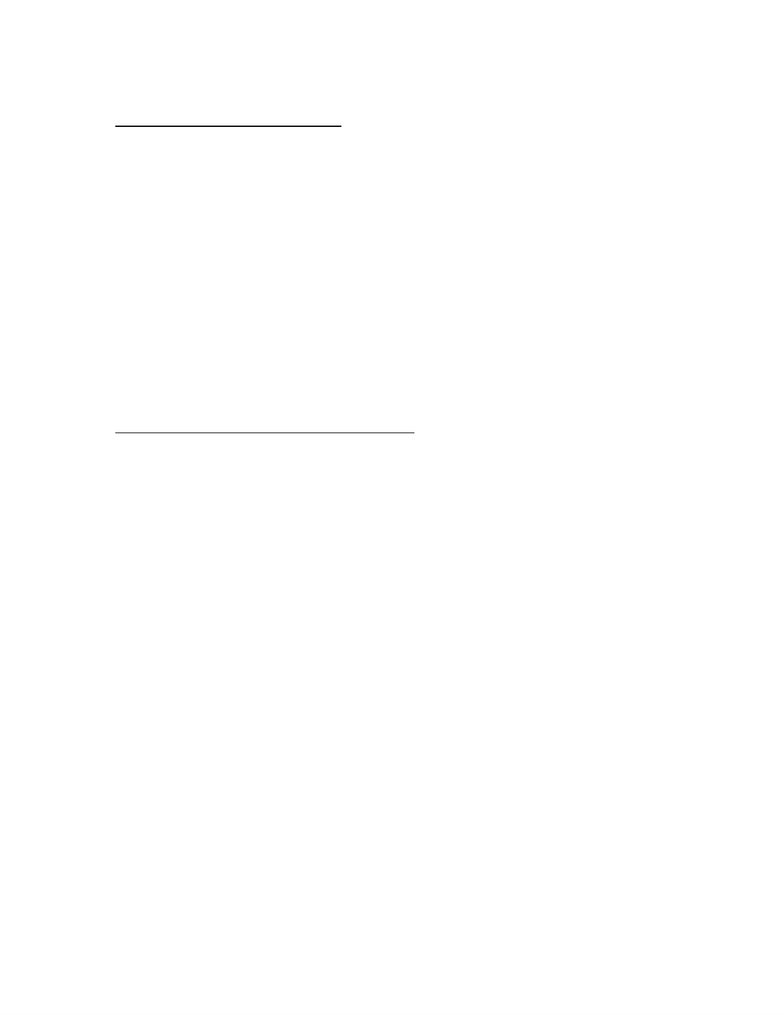 Lecture 9 (Content after second term test)
Oedipous and the Myths of Thebes
• Thebes, in Boeotia, north west of Attica
• Two foundation stories for Thebes:
1. Cadmus and the dragon
2. Amphion and Zethus
Thebes
- a city associated with oracles and riddles. Riddles in particular mean that there is
a meaning that exists that just needs to be deciphered.
- all the myths related to Thebes have violent family problems and pollution
- Thebes has been traditionally associated with the invention of writing.
- Very close to Athens and is a rival to Athens as well. It is capital of Boeotia
(associated with a cow) as Athens is capital of Attica.
- Thebes is the city under siege, one that must be protected and defended.
1st Foundation Story -Cadmus and the Dragon
• Phoenician king Agenor asks his sons (Cilix, Phoenix, Cadmus) to go and
search for their lost daughter Europa (the princess abducted by Zeus in the
shape of a bull and taken to Crete.) Europa disappeared over the sea on the
back of a bull.
• Agenor asks his sons to find Europa, none of them can find them because
none can trick Zeus. All 3 sons are associated with regions that surround the
Mediterranean sea. Their father told them not to return without her. When
Cilic and Phoenix gave up, they settled in permanent colonies (named after
themselves)
• Cadmus at Delphi – Pythia at Deplphi tells him that he will never find Europa
but he should follow a cow with special markings and where the cow stops,
that will be his new city.
• The cow gets tired and lies on the ground. Cadmus and his companions
choose that space to build a city. Founds Thebes on a hill in southern Boeotia
• The first step to building a prosperous city is to make a sacrifice. The
comrades go to a spring nearby to get water. The spring is protected by a
dragon. *(THEME- dragon that protects ). Killing the dragon is associated
with building a foundation in Greek myth. Cadmus realizes his comrades
haven’t returned and he goes and slays the man-killing dragon. Athena
instructs that he knocks out the dragon’s teeth, plows the ground and sow
half the teeth. The other half she would later give to Aeetes in the story of
Jason. The teeth rise up as warriors. Cadmus threw stones among them,
Thinking they were being attacked, they fight against each other until only 5
Unlock document 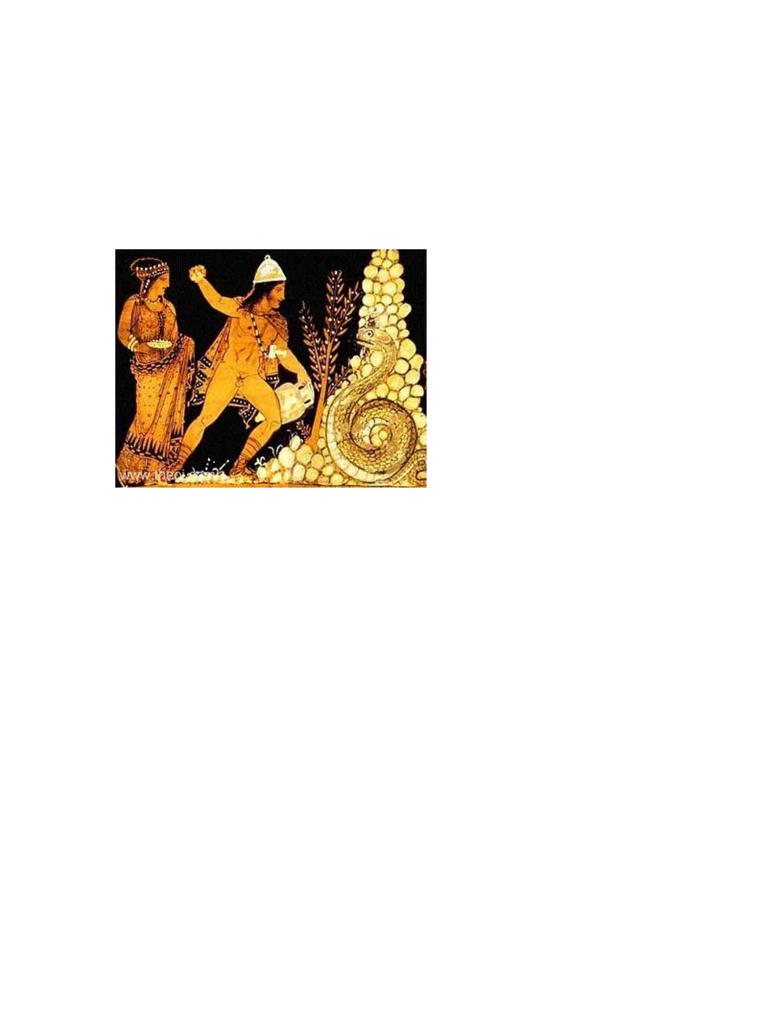 remain. They are the Sparti(not related to spartans) “sown men” - in greek
means armed men, they are the ancestors of Thebes
• *** pg 477-479 passage by Ovid- Metamorphoses
• *** Picture on page 476 of Cadmus and serpent
• Cadmus and the Dragon, red-figure crater, 4th c. BC
Cadmus killing the dragon with a stone.
He is carrying a pitcher of water.
Athena is next to him, as always protecting heroes
The plate she is holding has teeth in it.
• Cadmus slays a man-killing serpent at a spring sacred to Ares and is punished
by Ares to serve for him for eight years
• Once purified, after he paid his penance, Cadmus marries Harmonia,
daughter of Ares with Aphrodite. The wedding is a very important event (just
like that of Thetis and Peleus), symbolizing the connection between
Phoenicians and Greeks. She received wedding gifts from Aphrodite
(necklace made by Hephaestus, a peploi- robe that gave its owner royal
dignity). These gifts although wonderful, will bring unhappiness to the
following generations, to all children who wear them. Their daughters: Ino,
Semele, Agave, Autonoe (mother of Acteon who looked at Artemis bathing
and was killed) and son Polydorus . (ex Ino killed her own children then
jumped off a cliff, Semele was burned to a crisp by a thunderbolt, Agave
ripped her son Pentheus to bits.)
• It seems that Cadmus was comdemned through his life for the murder of the
dragon. He would have to pay for his sin.
• At death Cadmus and Harmonia leave Thebes (to escape his sin or killing the
dragon) and he goes to Illyria. He is still punished by the gods. He said
something along the lines of “If serpants are so important, than I wish I
Unlock document 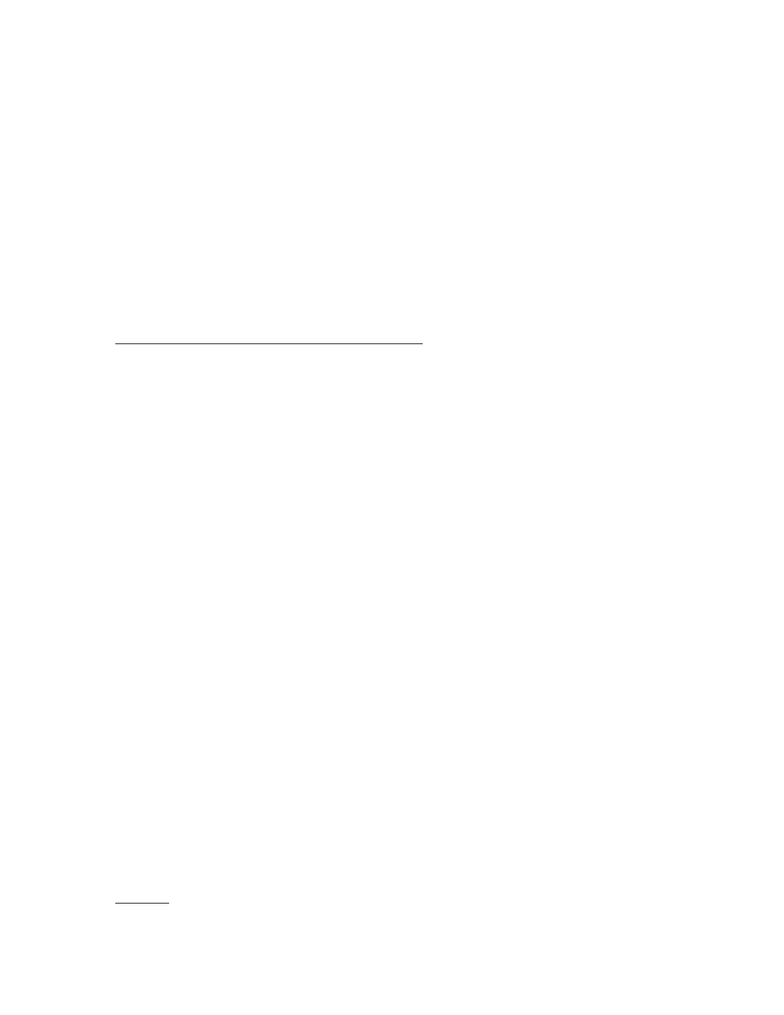 would be a serpant” and him and Hermonia, who also wished so, turn into
serpents, then are sent by Zeus to the Elysian fields
• It is thought that Cadmus brought the alphabet to Greece. Greek word for
letters are Cadmiun letters. The greeks were very enthusiatic and shocked by
the civiliazational aspects of the letters.
• Also theory that Egyptians invented alphbet and writing and brought it over
to Greece.
• Greeks used venetian alphabet at the beginning, but used letter to rep a
syllabus. Greeks used this writing in the beginning. Our alphabet today comes
from Venetian alphabet.
2nd foundation of Thebes- Amphion and Zethus
• After Cadmus, his grandson Pentheus (from the story of Dionysus)became
king in Thebes
• After Pentheus dies, a separate tradition reports that another son of Cadmus,
Polydorus, who marries Nycteis, daughter of Nycteus.
• Antiope, the other daughter of Nycteus, is impregnated by Zeus with the
twins Amphion and Zethus. Nycteus is upset because of the dishonor of his
daughter and commits suicide after asking his brother Lycus to avenge the
family honour Antope was driven out by Nycteus and went to Thebes.. The
born twins are found by shepherds and are raised in the wilderness.
• Antiope’s uncle and aunt, Lycus and Dirce, in Thebes persecute Antiope- she
was locked and persecuted. Antiope later meets her twins by chance in a hut
in the woods after she escapes from her tormenters.
• The twins avenge their mother and kill Dirce and Lycus.
• The twins are associated to a second foundation of Thebes; building the walls
of the city.
• Zethus is a cattle breeder. He is the one who starts carrying the large stones
for building the wall and is prepared to do all the necessary work. He is
practical, a man of action.
• Amphion is a lyre-player and by singing about the foundation/walls of
Thebes. The stones magically lifted themselves and created the seven walls of
Thebes with their seven gates. This is showing the power of art. Here is the
pattern associated with Thebes, there must be a message decoded. The first
thing one does when founding a city is building protective walls.
• Zethus marries Thebe
• Amphion marries Niobe(commits hubris agains Leto and killed by Letos
children), daughter of Tantalus. Parallel story of twins who get revenge
against those who persecuted their mother.
• *** picture on 482 of Death of Dirce and Lycus.
Oedipus
Unlock document