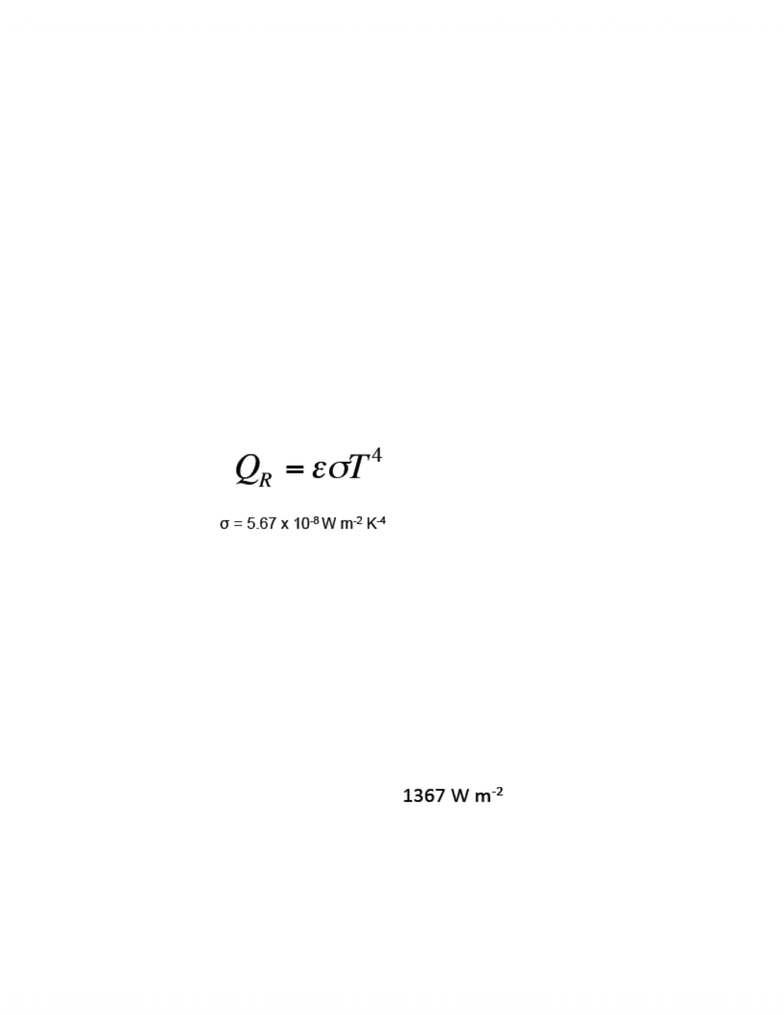 Environment lecture 5
Assignments due 15 days after tutorial, due in dropboxes
Midterm covers all up to 6th lecture
Water- relates to second assignment
Energy flux
 The rate (amount per time) of energy (joules) received at a surface= power in J/s aka a Watt (W)
 Energy we get is emitted at us as a wave, that wavelength is inversely proportional to the temp
of the surface of what is emitting the radiation
 How much energy is coming in? Relates to how you feel, eg hot or cold
 Power per surface area is an Energy Flux and is measured in W/m^2
o If take watt, and see how much there is over a meter squared = energy flux
o We talk about how much energy we get from sun in W/m^2
 Physical equation- Stefan boltzmann law
o Stefan Boltzmann law- The rate of energy emitted by a substance
o
o Temp to the power of 4 in kelvin. eg temp of earth into kelvin to the power of 4
o Sigma is the constant. 5678 easy to remember, will be given
o Epsilon- a characteristic called emissivity, the efficiency at which a given surface can
emit energy. Eg fuel efficiency. 97% fuel efficient, 3% is lost
o Only thing that has an emissivity of 1.0 is the sun, a black body emitter, emit at 100%
efficiency, everything else has emissivity between 0 and 9.999
 Eg find the variables and ask about the energy flux
Solar constant
 Solar constant- the rate at which insolation (incoming solar radiation) is received at the outer
atm of Earth
 Energy flux is important because we want to know how much energy is going in and coming out
 Solar constant 1367 watts per meter squared
 Energy hitting earth averages at 342 W/m^2
 Energy hitting the earth is way less, because it is geometric problem
o When sun radiation is hitting the earth, it’s not hitting the whole sphere, just a circle
o 4πr^2 vs πr^2
o 1367/4=342
Unlock document 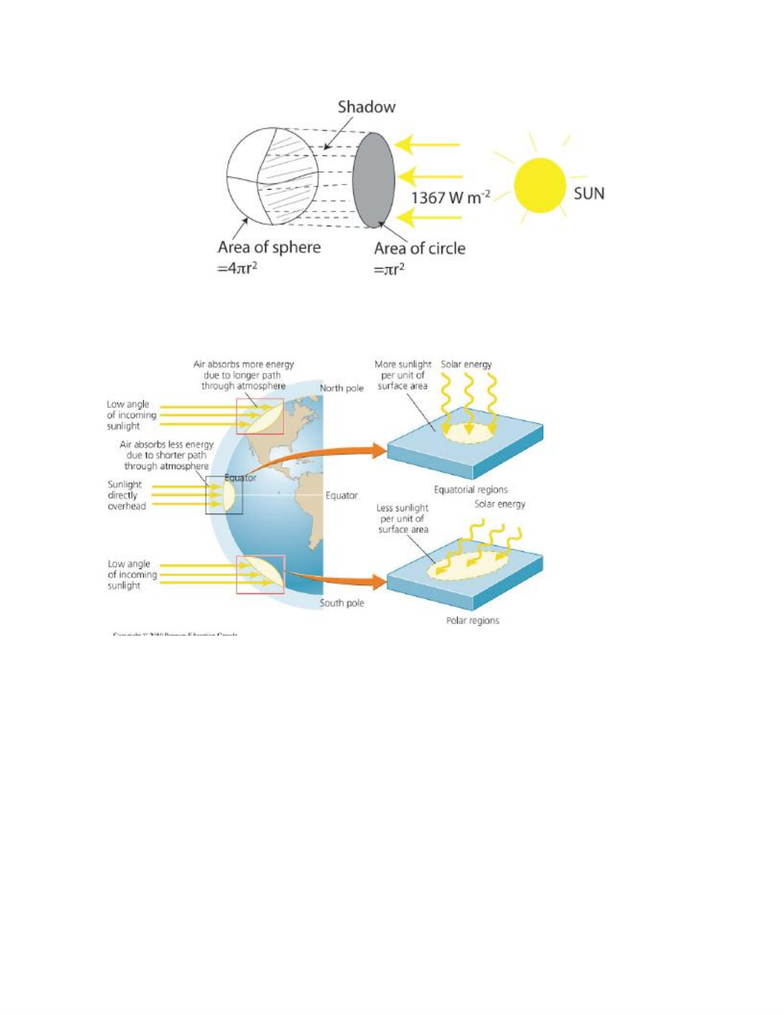 o
Latitude controls Fig 14.4
 Not to say 342 watts everywhere on average, lots of other major controls on how much solar
radiation hits the surface of the earth
 Latitude- how direct the hit is
o Thickness of the atmosphere of which the radiation has to move through
o Eg equator, direct hit, going through least amount of atm possible and concentrating
more sunlight on one spot
o Higher latitudes- same amount of radiation spread out big area therefore it’s cooler as
you go away from equator
o Also If wrapped atm of equal width around the earth ,at the higher latitudes the atm
start to bend towards the poles, and so same thickness but some rays are hitting the
earth at an angle eg 60 degree angle, so more atmosphere the sunlight has to go
through eg greenhouse gases and clouds. More chances if it being absorbed and
reflected
Unlock document 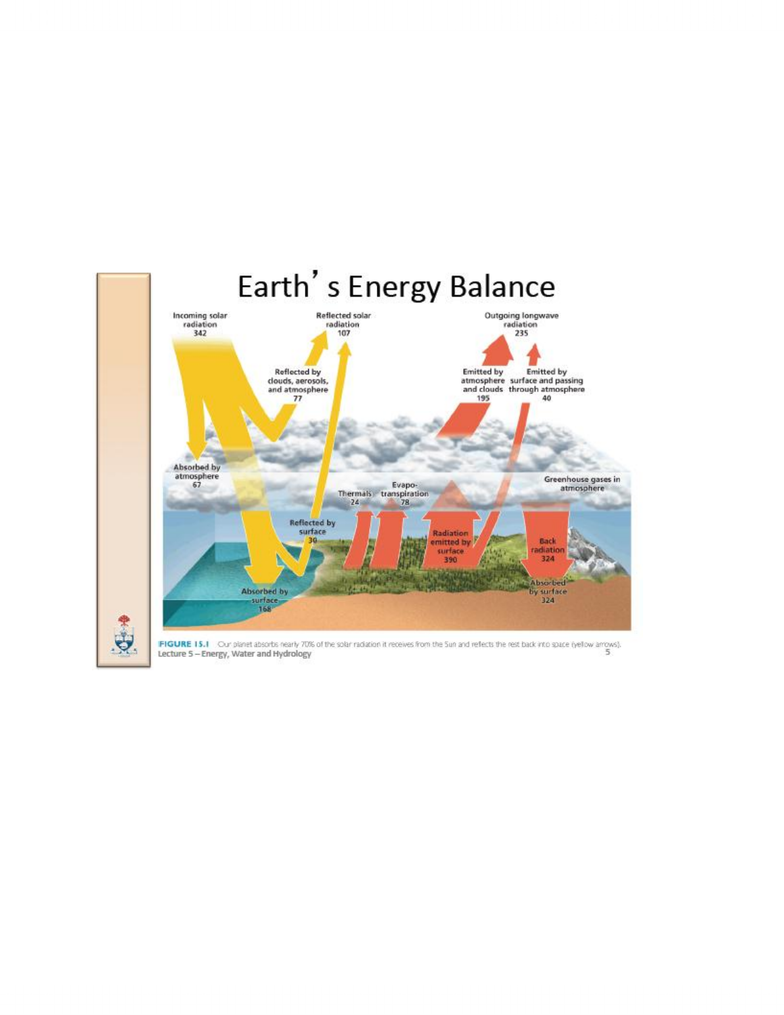  At equator- sunlight directly hitting directly- air obsorbs less energy ue to shorter path through
atm
o More sunlight per unit of surface area
 Near poles- low angle of incoming sunlight- air absorbs more energy due to longer path through
atm
o Less sunlight per unit of surface area
Earth’s energy balance Fg 15.1
 Incoming solar radiation 342, as get close to surface of earth, have greenhouse gases
o Most abundant greenhouse gas is water, eg as clouds
o Relative constant amount of water whereas the other gases like co2 is increasing
o Solar radiation comes in, a lot gets absorbed by atm, a lot is reflected and 50% is
actually absorbed into surface
o If have incoming shortwave radiation, and is reflected away, that reflected radiation
remains as same wavelength, shortwave
o If it is absorbed by the surface of the earth and remitted it is remitted according to
wien’s displacement law, as to the temp of the earth not the sun. So when absorbed
and re-emitted the earth is much cooler, so less energy flux, so it is much longer
wavelength. That’s why most radiation outgoing from earth is long wave
 Some energy going through transpiration, and thermals (temp related things)
Unlock document