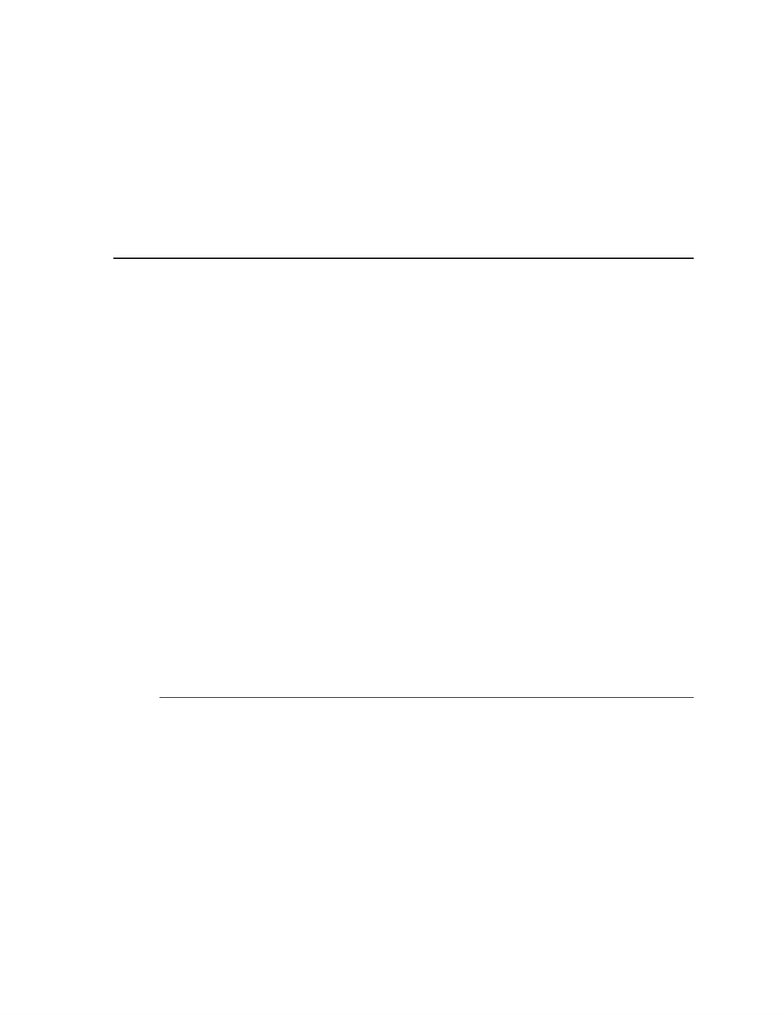 Lecture 4 and Quiz
Continue Reading Chapters 1-4
1. Mid-Ocean Ridges: Modern and Ancient (Ophiolites)
2. Transform Faults
3. Iceland: Waling Over A Mid-Ocean Ridge
4. Volcanic Activity Under Glaciers Jokulhlaups
5. Geothermal Energy
 if you understand plate tectonic, you’ll understand the meaning of life. This weeks quiz
is about what I’m going to say today. In terms of oceans our expiration of the planets
ocean basins, oceans just like you and me. They start off small and today were going to
see them grow, mature and the classic example is the Atlantic Ocean. Now I choosen
the Atlantic because we can go to a place called Iceland and we can walk over the
middle of the ocean. What we can the mid-ocean ridge. It’s exposed above sea level,
dry, we can study the volcanoes and we can use this information to see the processes
that’s going on below the rest of the ocean. Figure 2.2 – shows the the reverse process
at the bottom. To put into reverse gear and slowly bring back the continent together
until were into Pangea 2. It’s about the same time in the future. About 150,000,000
years time. Lifecycle of oceans and the Atlantic ocean is a mature ocean.
 Were going to take a close look at mid-ocean ridges. How they function. Were going to
look at modern ridges and there’s a term up there – Ophiolites which is the name we
give to fossil mid-ocean ridges, Ancient mid-ocean ridges. You can appreciate that
oceans are closed. Were going to take you to the Himalayas etc. And show you what
happens when ocean’s closed next week. I can take you to Newfoundland too and much
of the islands in Newfoundland is made up of ancient ocean crust which is there
because Africa collided with Eastern North America 400 million years ago. So in
Newfoundland, we can walk over these ridges, so we see these fossils in the mid- ocean
ridges (we call them ophiolites.) Then were going to learn about transform faults and
then will continue our journey to Iceland where we can walk over a mid-ocean ridge and
I’ll say a few comments about hazards in Iceland.
Unlock document 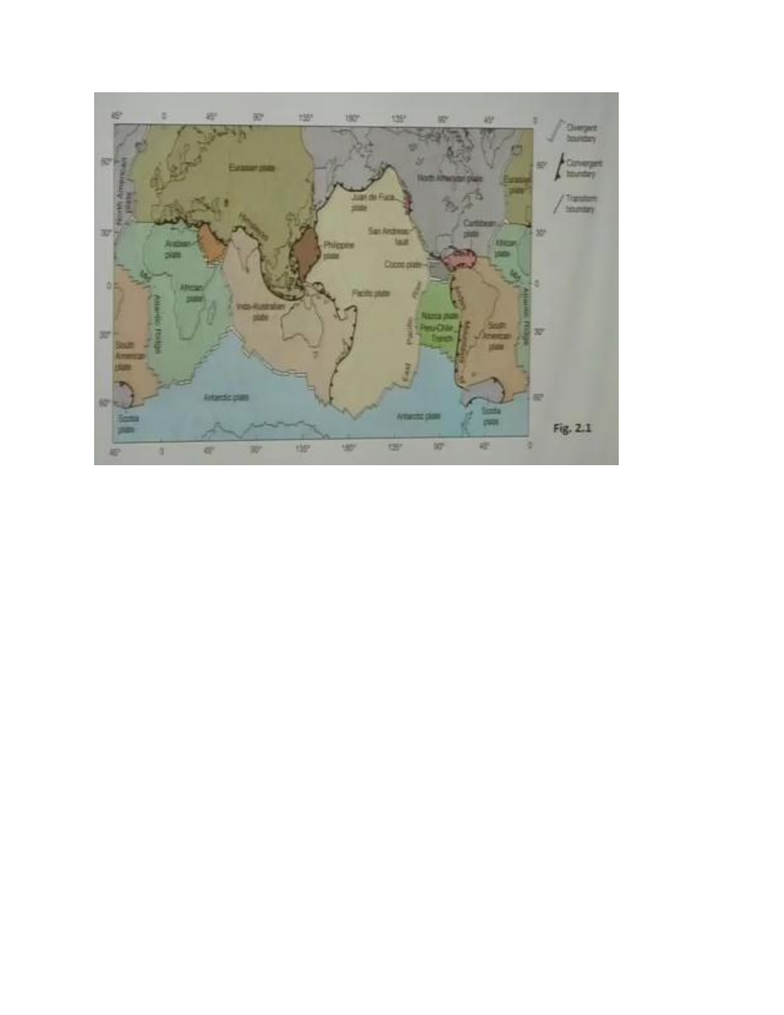 Figure 2.1
 Look at the Atlantic Ocean and you’ll see the North American Plate. The Western margin is
where? What Canadian city sits right on the Western margin? – Vancouver. Hence, the next big
one, the big earthquake that will occur, if, it’s a matter of when because Vancouver sits right on
top of the Cascadia subduction zone where in the Pacific plate have been driven down below
North America. The active plate margin on the west coast. Where’s the opposite plate margin?
The passive margin of the North American plate is actually along the middle of the Atlantic
Ocean. That is where the plate is being created, pushing all the other plates west. So that
explains why were on the move. And that explains why Vancouver is being driven over the Pacific
plate. It’s pushing the plate west. Okay look at the other side of the middle of the Atlantic ocean,
you’ll see the Eurasian plate – one of the largest plates on the planet that’s being pushed
eastwards. Again, that’s the passive plate margin. We call them passive margin not really
because we get lots of earthquakes there. Fairly shallow, fairly small, earthquakes. So the term
passive is not absolutely right. But can anybody tell me where the active plate margin is in the
Eurasian plate? And what we find along it’s margin? Where would you go in Europe to stand on
the active plate margin? Iceland is the passive plate margin. The medditeranian is really the
boundary between the Europe Eurasian plate and the African plate. But what mountains would
you go to that recall the tense collision between those two? The Alfs And you’ll see the Alfs about
where it says Arabian plate. The black line with the teeth and it goes all the way to Turkey. So
that’s a major active plate boundary marked by high mountains. So were going to look at that
next week.
Unlock document 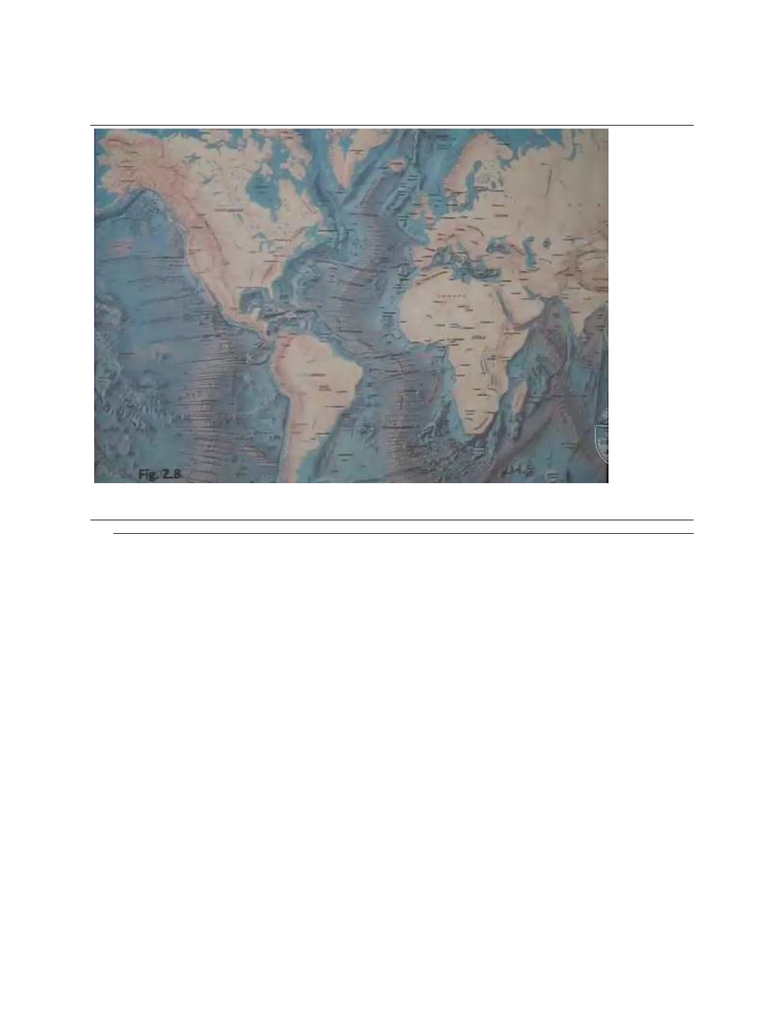 Overgent boundary, Convergent boundary, Transform boundary
Figure 2.8
 Couple of terms. This is a map that you should be familiar by now. This shows the ocean basins
are not flat. And you can pick out the mid-ocean ridges along the center lines of the oceans and
you’ll notice the water is very shallow along the middle of the ocean. Iceland sticks up above sea
level. There are little islands that stick up too above the ocean surface and then you’ll notice that
the water depth increase away from the mid-ocean ridge and get very deep , adjacent to the
continents. Abyssal planes – planes being of flat areas, and meaning really deep, 4, 5km deep.
So the shallowest part are the oceans right along the middle, right above the mid-ocean ridges.
That’s where New hot magma’s coming up , low density, shallow water. And as the crust is
pushed away either side by the cores sinks. Now if you notice the continental margins that there
is a flat area just on shore and that’s called the continental shelf. Most shelfs are made of green
thicknesses , many kilometres of sediments that have been washed off the continents.
Continental shelf. They are very important because. What’s in continental shelves? Fisheries,
continental shelves are fairly shelved, there’s lot of light, oxygen, lot’s of nutrients coming in.
What major fisheries did Canada use/ to have on the continental shelves? Cod fish n the Eastern
coast on the continental shelves. The banks . Newfoundland banks – shallow water, very
productive. The shelf on the active plate margin is almost non-exsistant whereas the shelves on
the passive ages of the continent, they are very big. It’s because the subduction from this side
(South America) and North America. So those sediments which would normally build large
continental shelves are being subducted. They are being destroyed. But what else is in that
Unlock document