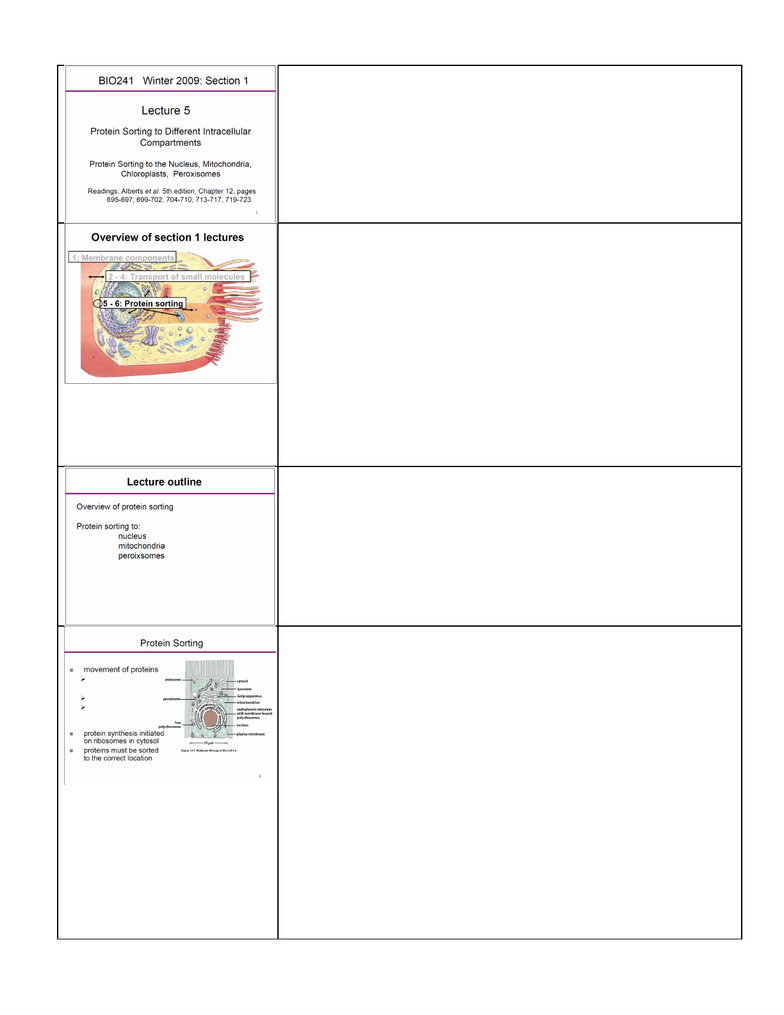 - We’re going to look at sorting of proteins into different intracellular
compartments.
- We’ve been looking at the movement of small molecules across the different
membranes in a cell but the proteins also need to move to the different
compartments in order for the compartments to have their specific functions.
For example, the ER, the Golgi, the peroxisome and the nucleus all need
specific proteins in order to maintain their proper functions. For example you
can imagine that a transcription factor needs to get to the nucleus in order to
transcribe DNA into RNA so that transcription factor needs to be sorted to the
nucleus in order to function properly.
- Again the 1st lecture we mainly went over membrane components & looked at
the transport of small molecules across these membranes & now we’re going to
look at the sorting of proteins across these membranes into the different
compartments within a cell. For example, the mitochondria & we’re going to
look at cytosolic proteins, the peroxisomes, the ER, & of course the nucleus.
We’re also going to look at the nucleus & how proteins also get into & out of
cells.
- For today, we’re going to look at protein sorting into the nucleus,
mitochondria and into the peroxisomes.
Within cell from different compartments
Out of cell
Into cell
- Now we can look at the movement of proteins. Don’t forget that the
membrane surrounds the cell itself, the PM and also the organelles within the
cell. The peroxisomes are surrounded by a membrane, the nucleus is actually
surrounded by two lipid bilayers, mitochondria also have a lipid bilayer
surrounding them, the Golgi, the endoplasmic reticulum, all of these are
compartments which contains proteins and need proteins sorted to them.
- We can look at movement of proteins within the cell from different
compartments, we’re also going to look at the movement of proteins out of the
cell across the plasma membrane and then how do cells uptake proteins from
the extracellular environment in a process termed endocytosis.
- So how do proteins get from outside the PM to the inside of the cell? There
are thousands of proteins synthesized in a cell and the protein synthesis is all
initiated on ribosomes in the cytosol. Initiation if you’ll recall from BIO240 in
the fall, you will recall that DNA is transcribed into RNA, the RNA is shuttled
into the cytoplasm where it is translated by ribosomes into proteins. All
proteins, the initiation of translation are all initiated in the cytosol.
Unlock document 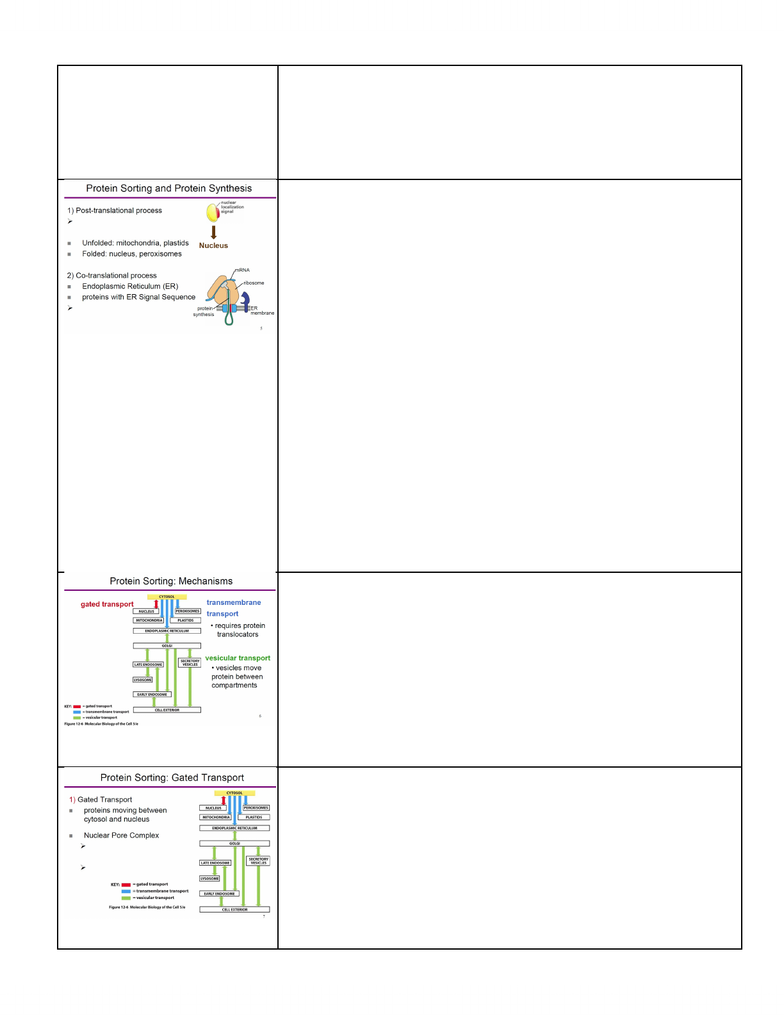 - From the cytosol, proteins need to be sorted to their proper locations. An ER
protein needs to be translocated from the cytosol to the ER and to do this, the
proteins have certain signaling sequences on them that guide them to the proper
locations. The amino acid sequence contains a peptide or a signature sequence
that will guide the proteins to their appropriate compartments.
- So just appreciate the thought that protein synthesis of almost all proteins is
initiated in the cytosol.
Proteins fully synthesized in cytosol before sorting
Associated with ER during protein synthesis
- The different types of protein sorting can occur post-translationally, so in a
post-translational process, the proteins are fully synthesized in the cytosol
before being sorted. The entire protein is made and then it is sorted. This
occurs for sorting to the mitochondria, the plasmids or chloroplasts, nucleus
and to the peroxisomes.
- There are two different types. In one type, the protein remains unfolded.
There are usually specific proteins called chaperones that maintain these
proteins in the unfolded state before they’re sorted to the mitochondria or to the
chloroplast. In the second type, the proteins are completely folded after their
translation and then the folded protein is translocated into the nucleus or to the
peroxisomes. In both cases, these occur post-translationally.
- In contrast, there is also co-translational sorting that occurs and this occurs
into the endoplasmic reticulum. So proteins with an ER signal sequence will
associate with the endoplasmic reticulum during protein synthesis.
- We’re going to go into details about this in the next lecture but basically, this
just shows us what this kind of co-translational process looks like, here would
be the ribosome, the mRNA is being translated into protein and as the protein is
being translated, the protein is being funneled into the ER across the ER
membrane. This is sorting in a co-translational manner. As the protein is being
translated, it is being sorted to the ER, you can see that the ribosome is closely
associated with the ER and that is what gives the appearance of the rough ER,
is the setting of ribosomes all around the ER.
- There are three main types of transport that we’re going to cover.
- Gated transport which refers to the movement of proteins from the cytosol to
the nucleus.
- Transmembrane transport which occurs to the endoplasmic reticulum as we
just saw in a co-translational process, but it also occurs to the mitochondria, to
the plastids and to the peroxisome. Usually, translocator protein complexes are
involved in the process of transmembrane transport.
- And then the third kind is vesicular transport, where vesicles move proteins
between the compartments. We’ll see examples of this when proteins move
from the ER to the Golgi and when the proteins move from the Golgi to the
endosomes or the lysosomes and also for proteins that are bound for the outside
of the cell in secretory vesicles.
Selective transport of macromolecules
Free diffusion of small molecules (<5000 Daltons)
- The first type is called gated transport and this refers to the movement of
proteins between the cytosol and the nucleus. This occurs through what is
called the nuclear pore complex. The nuclear pore complex traverses the two
membranes of the nucleus, so if you’ll recall the nucleus has two lipid bilayers
surrounding it and the nuclear pore complex goes through both of those
membranes and forms a pore.
- This pore is gated meaning that it is selective for the transport of
macromolecules, it is called a pore but it is selective for certain
macromolecules. However, if molecules are small enough, less than 5000
Unlock document 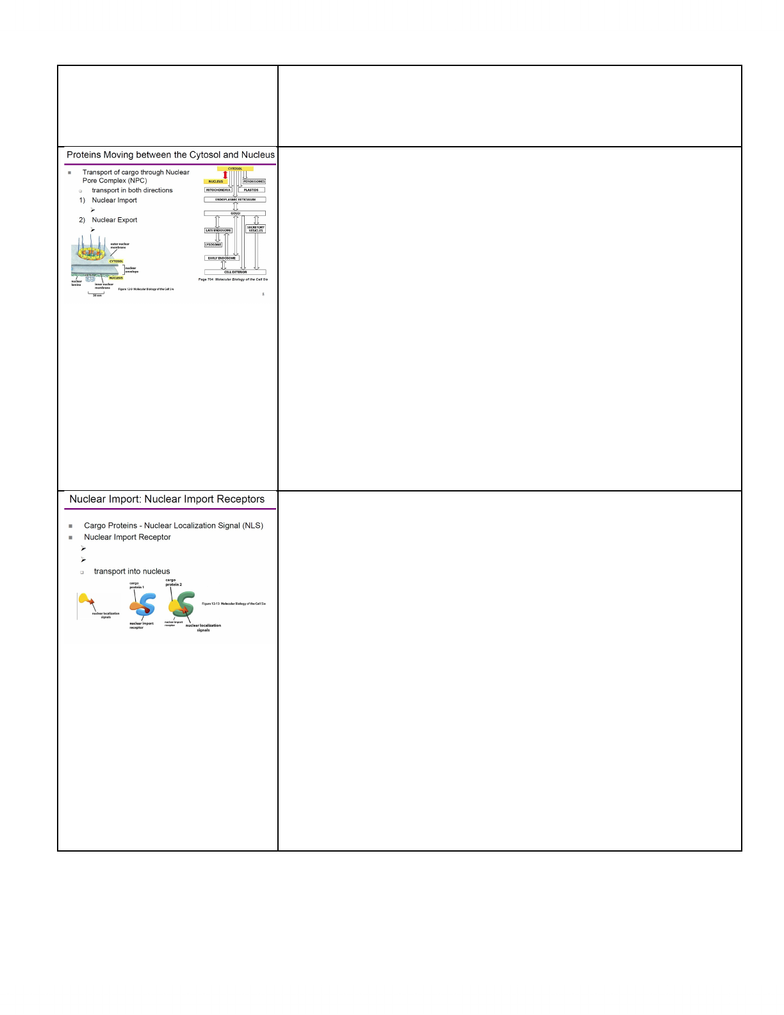