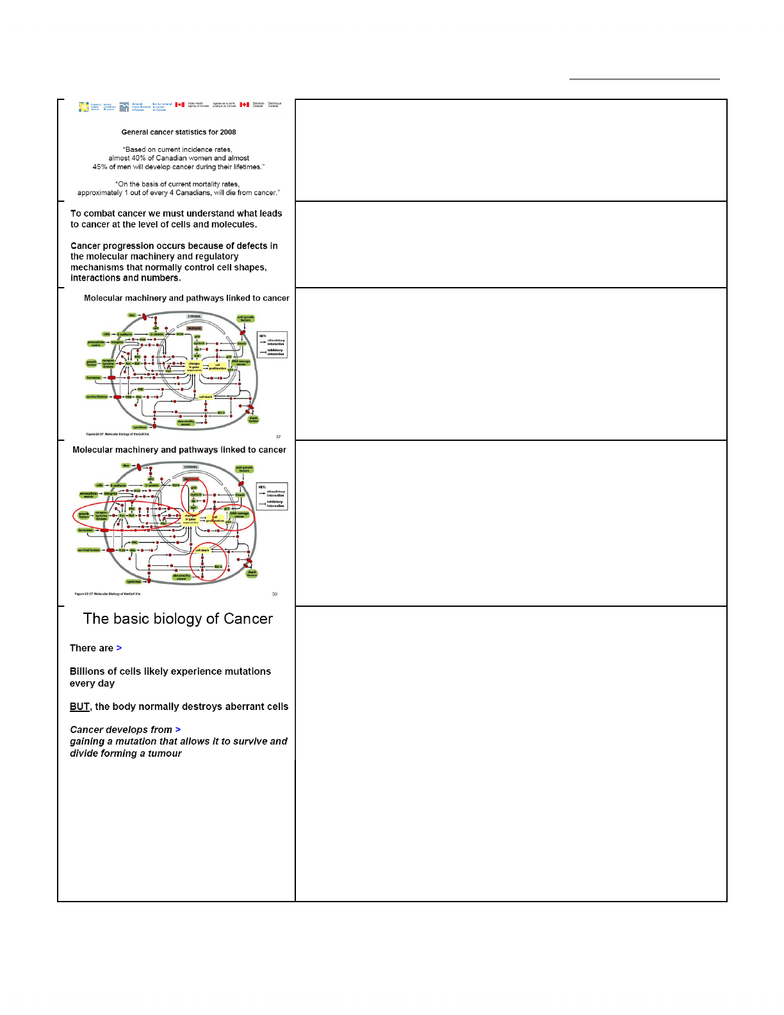 Thursday, March 26, 2009
- Today we’re going to discuss cancer & as we can see from these
statistics, this is a major issue in society to deal with.
- The key thing about this slide is that these pathways are also the
pathways that are critical for normal cell biology so the same pathways
that are involved in normal cell biology are also involved in cancer. They
somehow go awry & can lead to cancer.
- So we can see for example here in this part, we’ve got cadherin
integrins, we can see cell-cell interactions can be implicated in cancer.
- Here we can see pathways downstream of growth factors or mitogens
that will lead to the activation of Myc & deriving progression through the
cell cycle.
- Here we have control of cell death.
- Here we have sensors of DNA damage and p53.
- Here we have another pathway related to the cell cycle.
- So these same pathways that control normal cell biology are implicated
in cancer.
 ~1014 cells in the human body
 One of these cells
- So there are a lot of cells in the human body, there are 1014 cells in the
human body and only one of these can lead to the development of cancer.
All of these cells here, they are experiencing mutations everyday, we’ve
got billions of cells in our body that are experiencing mutations. Many of
these mutations are being fixed by the DNA repair machinery that is in all
of our cells so most of those mutations will be fixed right away. Those
that can’t repair their DNA damage, the body will destroy those aberrant
cells as we learned about with p53 inducing apoptosis if there is
persistent DNA damage.
- But cancer can develop from one of these cells if they can gain a
mutation that allows it to survive & divide, therefore forming a tumour.
So if it can escape these normal repair mechanisms, these normal
apoptotic mechanisms that would destroy aberrant cells, cancer can
develop. The cancer will develop from one single cell – it’s a clonal
process, it grows from one single cell dividing & evidence for that is
shown in the next slide.
Unlock document 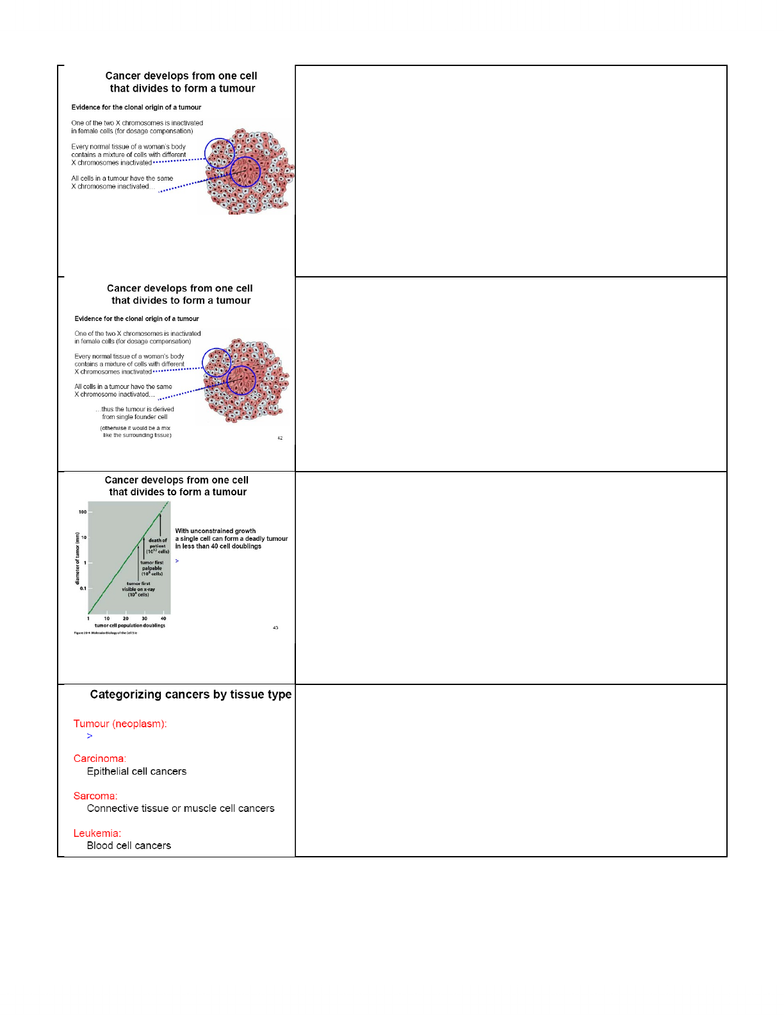 - Here is evidence for the clonal origin of a tumour.
- And you can see in this illustration right here, b/c we see 2 different cell
types shown in this tissue right here. Now these 2 different cell types
shown here in red and gray they represent cells that have one X
chromosome inactivated or another X chromosome inactivated.
- So females have 2 X chromosomes to match the gene expression that
occurs in males so that we all have the same gene expression on our sex
chromosomes. Males have an X & a Y, females have an X & an
inactivated X & that evens out the gene expression. So one of the 2 of X
chromosomes is inactivated in female cells & this is for this dosage
compensation so that we all have the same gene dosage from the X
chromosome. But this inactivation occurs randomly – one of the X’s
could be inactivated or the other one could.
- B/c there is a random process of inactivation, these cells will inactivate
one X or the other, so we see a red cell or a gray cell.
- Now if you’ve analyzed the cancer in this tissue, all of these would have
exactly the same X chromosome inactivated. So what this means is the
tumour was derived from a single founder cell – one of these single red
cells in the picture.
- If it was founded from a group of cells as seen in the blue circle, then
the tumour would also be a mixture of these 2 different cell types, the red
& the gray.
- So these sort of experiments here show that they’re all being derived
from one cell type in this tissue. So this is one example which shows the
clonal origin of this tumour – tumours can arise from one single cell.
 (Exponential growth)
- But even though they can arise from a single cell, this is very dangerous
as illustrated right here b/c when a single cell divides, this is an example
of exponential growth so one cell will reproduce 2, 2 will produce 4 & 8
& so on.
- Diagram: Here are the #s of population doublings across the bottom of
this graph & you can see by the time this single cell that’s started out
here, by the time it’s doubled 30 times the tumour size is approaching a
centimeter across. Here when it’s a centimeter across, this is a size that is
palpable, it can be detected by a physical exam by a physician, if it
undergoes 10 more doublings, now this tumour will be 10 cm across so
it’s going from a size like this then in 10 doublings, it will be 10 cm
across & this size of a tumour is going to be deadly for the patient.
 Uncontrolled growing mass of abnormal cells
- So let’s just go through some of the categorization of different types of
tumours. These are all different types of tumours, & they’re classified
based on the cell of where the cell originated from in the body that led to
this cancer.
- In addition to tumours being classified based on their origin in the body,
they can also be classified based on their severity.
Unlock document 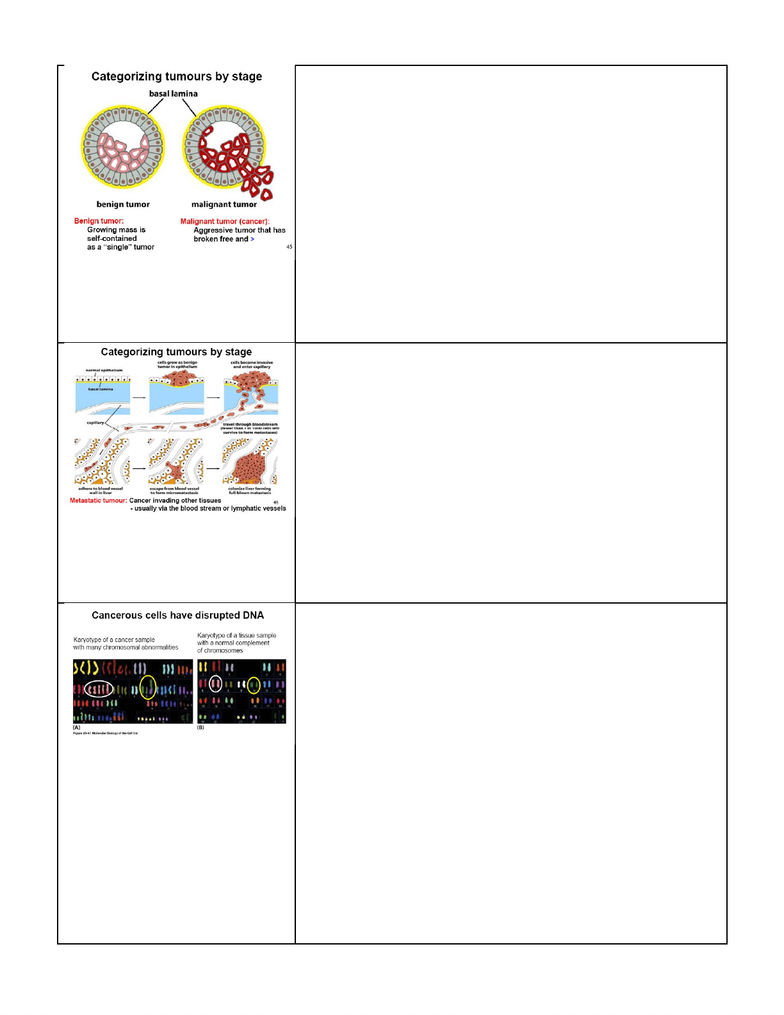  Invaded surrounding tissue
- Here we’ve got first off, we have a benign tumour & here’s a malignant
tumour here.
- So this benign tumour, this is a growing mass of self-contained cells,
it’s a single tumour. So here this one would have been arising from an
epithelial origin. Here you see the epithelial cells here, here they’re
starting to divide uncontrollably but notice that this tumour is surrounded
by the basal lamina – it’s contained by the extracellular matrix so it’s a
contained unit, it’s growing but it’s contained in the body.
- The difference then going to a malignant tumour is that has become a
more aggressive tumor b/c it has broken free of this basal lamina and it
starts to invade the surrounding tissue.
- So both tumours here are growing, the cells continue to divide. In this
case (benign), it’s contained within the basal lamina, contained within
one spot in the body & here (malignant) the cells are still dividing but
now they’re escaping that initial position in the body, leaving & invading
surrounding tissues.
- Now the next step after this is even more dangerous b/c now we have a
metatastic tumour. Now the tumour not only invades the surrounding
tissue, but it can invade tissues all through the body.
- So here up at the top we’d have our normal epithelium with the basal
lamina right below it. Here we’d initially have a benign tumour starting to
grow so it’s self-contained, it’s kept in this part of the body b/c of this
basal lamina.
- Now it starts to become malignant so it’s leaving that initial site,
breaking through that basal lamina. Once it does that, it can start
migrating through the extracellular matrix, the connective tissue & reach
another compartment of the body, either the blood vessels or the vessels
of the lymphatic system & these cells can travel through the lumen of
vessels to completely different sites of the body & then leave these blood
vessels to then form a secondary tumour in another part of the body. So
this is the most dangerous type of tumour where you have the tumour
cells spreading throughout the body.
- Now the key thing for all of these cancers is that cancer cells have
disrupted DNA.
- So in this slide here, this is called a karyotype & what it is is all of the
chromosomes in a cell laid out on a glass slide & the chromosomes have
been stained with different dyes. So here, this is a normal array of
chromosomes for a human cell so the yellow stain marks the 1st
chromosome, this brown stain the 2nd & the gray the 3rd & so on.
- So you can see in a normal cell, we have 2 of each chromosomes b/c
we’re diploid organisms. Have a look at this cancerous cell – this is a
very advanced cancer cell, there are multiple disruptions in this genome –
there is not just a single disruption that would start the process but it has
accumulated more & more genetic instability as it’s developed. You can
see in this one cell, there are now 4 1st chromosomes. here we have 6 2nd
chromosomes, so this cell is in big trouble – it has many extra copies of
these chromosomes – this relates back to cell division & their proper
segregation to the 2 daughter cells & if that doesn’t happen properly, then
one daughter cell can start to accumulate extra chromosomes & this is
what we can see in here in this cancer.
- In addition to the additional numbers of chromosomes, we can also see
chromosomes that have multiple colours too. So what does that mean?
Here we’ve got the number 10 chromosome with a purple bit on it – the
Unlock document