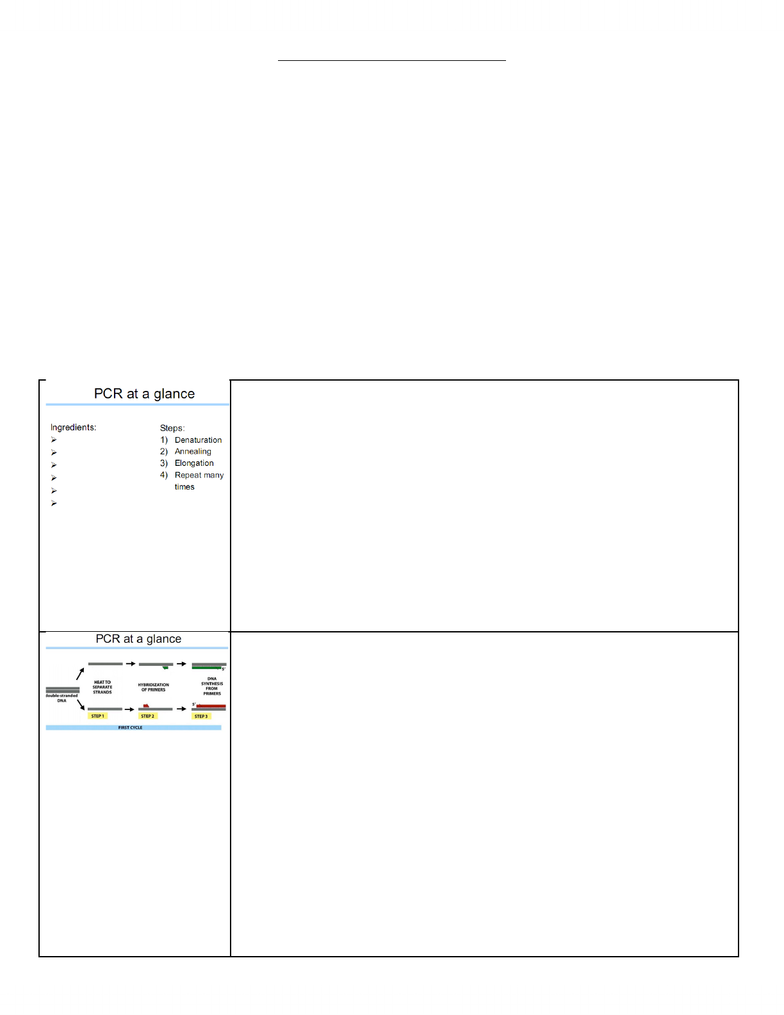 Lecture 11: Molecular Cloning Methods
Lecture Outline:
• PCR
• Forensic applications
• Isolating a gene using PCR with degenerate primers
• cDNA synthesis
Readings: Alberts, Ch 8, pp. 540-548
Question:
A – No: needs to be group 2
Splicesome contains proteins that catalyze the splicing reaction? No – cause it was the RNA
Consensus sequence signaling at the beginnings and the ends of introns are exactly the same in types of splicing. No
D) Exon size tends to be more uniform than intron size which helps the cell to choose the correct splice sites. Yes
The binding of the splicesome components such as U1 and SR onto the nascent bead as it emerges from the RNA
polymerase tend to increase splice error. No – should be decrease
 Template
 Primers
 Tac Polymerase
 dNTPs
 Magnesium Chloride
 Buffer
- This technique was a revolution in about the late 80’s or so. PCR is an extremely
sensitive & fast technique to make many copies of a given sequence that you’re
interested in. Polymerase Chain reaction (PCR) – came up by Kary Mullis.
- Repeat the 3 steps many times approximately 25 or 30 times.
- Tac is a type of DNA polymerase that was isolated from a bacterium which grows in
very hot springs. It grows in areas where the temp of the water is very high so it does
not denature at high temps – even though it is a protein it will not denature at high
temps – it was isolated from the bacterium thermos aquaticus.
- Able to amplify small about of DNA.
- What you need for PCR is that you need some DNA but you don’t need a lot, you can
get DNA from a few cells and that’s enough to amplify and the DNA can be a whole
mixture, the entire genomic DNA.
- This becomes our template DNA. The first thing that happens is that you heat it up to
94 degrees Celsius so it denatures the strands separating them completely. The idea of
denaturation of DNA is that strands separate out.
- What you need is you have to know something about the sequence you’re interested
in copying and we’re going to assume that we want to copy the section that is right
there.
- What we need now is a forward primer and a reverse primer. The forward primer is
the red one and the green one is the reverse primer – those we add in huge excess into
the reaction. The primers are complementary to the parts of the DNA it is attached in
the diagram. What we do next is that we lower the temp for the annealing, the primers
will anneal to the complementary sequence. That is what they do, they anneal so that is
the second step.
- The third step is that you slightly raise the temp to the optimal temp for the Tac
polymerase, the DNA polymerase, and what will happen is the DNA polymerase will
do what it does, which is synthesize DNA. The Tac polymerase will add onto the
primers and you will get a complimentary copy. This is the 1st cycle.
- What you can do is repeat the cycle over & over again until you do it roughly 30
Unlock document 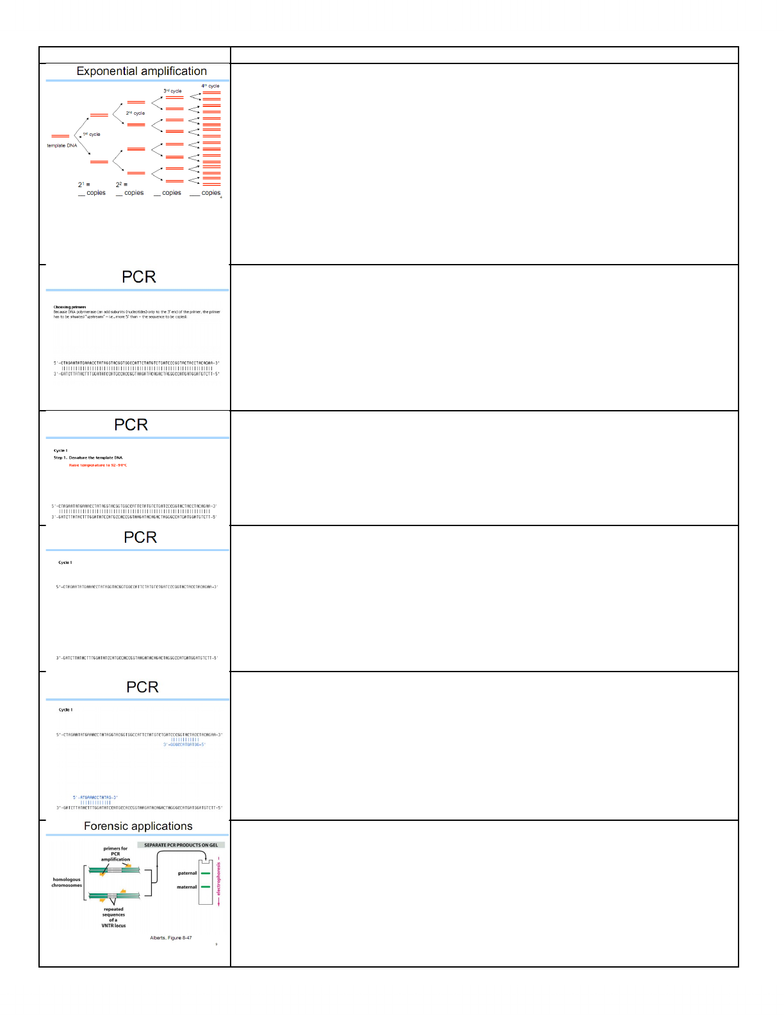 times or so.
 2
 4
 8
 16
- Let us assume we start off with the template we see in the diagram. In our first cycle,
the strands separate and we make a copy. In the first cycle we make 2 copies.
- Now both of these can serve as templates so in our 2nd cycle, we make 2 copies off
the 1st one and 2 copies off the 2nd one and you get 4 copies.
- These four can then separate again and get 8 copies.
- In your 4th cycle, you can make 16 copies.
- It is an exponential growth so by the time you get to 30, you have like a billion copies
of the specific regions of your DNA.
Choosing primers: B/c DNA polymerase can add subunits (nucleotides) only to 3’ end
of primer, primer has to be situated ‘upstream’- i.e more 5’ than – the sequence to be
copied.
- Here is the sequence we want to copy, we will copy the sequence in the diagram
- The first thing you have to do is that you have to be able to design the primers – we
need to design primers that will anneal to the 2 ends of DNA.
- The rules are identical to what you’ve learned – the concept of being antiparallel
where the primers must go antiparallel to your sequence and that the DNA must be
synthesized onto the 3’ end.
Cycle 1
Step 1: Denature the template DNA. Raise temp to 92-94.
- The next step is to raise the temp to a high temp to separate the DNA into single
strands.
- The temp will then be dropped down to roughly 65 but it can vary depending on the
primers used.
- The primers are being made attached near the ends of the individual DNA strands
- The actual sequence is depicted below
- Here notice that the reverse is going to the right and left
- You must know which is the 3’ and the 5’ and you must write them complementary
so label the ends with 5’ or 3’
- DNA polymerase comes along and starts to synthesize/make a copy this is on another
slide that is not included, that is how this works.
- In different parts of our chromosomes, there are these repetitive sequences of DNA
which have a similar sort of sequence – these repetitive sequences have the same
sequence and is repeated. The deal is though that in different individuals, they have a
different number of repeats. This is showing you two molecules of double stranded
DNAs – these are called variable number tandem repeats, VNTRs. Different people
will have different numbers of repeats.
- In you and the professor you will have two versions because one is chromosome one
from mom and the other is chromosome 2 from dad but her’s might be different
because she might have 2 different combinations of different repeats than we do.
Unlock document 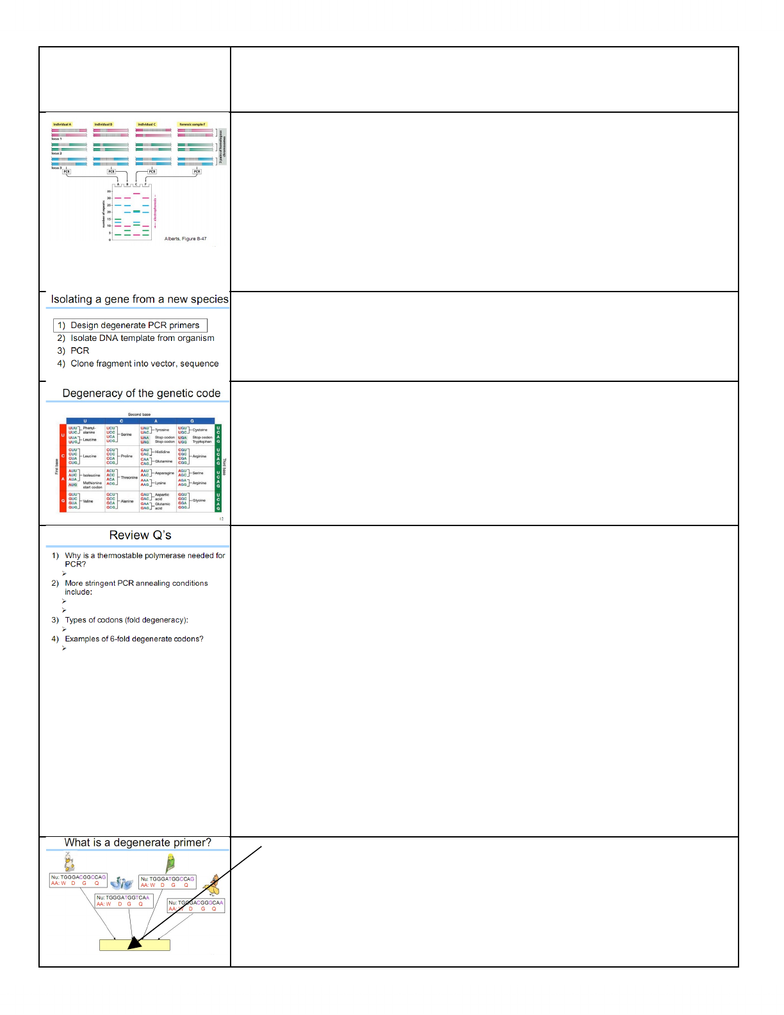 - What they do in this type of forensic analysis is that they know the primer sequences
that are identical that flank the repetitive sequences. They isolate the DNA and put the
primers in and do the PCR reaction. Because the # of repeats are variable, you get a
variable size when you run the sequence out so that you can have the bottom slide.
- Individual A has 3 different VNTRS. We have individuals B and C as well as the
forensic sample and we want to see if the forensic sample matches any of them.
- We do the PCR reaction and we run it out and we get something called a DNA
fingerprint.
- Which one matches to the forensic sample? Individual B
- They usually do a number of these because there would be a chance that two
individuals could have the same number of VNTRS at that specific place in their
genomes.
- This is one type of example of PCR that we can do but some people do other types of
PCR. The new application of PCR is that you will isolate a gene from a new species –
it is a very specialized idea from PCR.
- You don’t always do the first step when you do PCR but this is a specialized
circumstance where you want to find a new gene.
- Just so you remember DNA is degenerate so if you know the amino acid of a protein,
you know the AA sequence, you may not know precisely the DNA sequence because
amino acids like Threonine has four different possibilities in terms of possible DNA
sequences that codes for it.
1) Tac polymerase isolated from Thermos aquaticus (hot springs bacteria) is needed for
this PCR reaction because it does not denature when you raise the temp during PCR.
2) Stringent PCR annealing conditions refer to the primers we need to anneal onto the
DNA. If you have the temp higher then it is harder for them to anneal unless the match
is exact – that is the stringency where if they are exact matches, then the primers will
anneal, otherwise they won’t anneal. High stringency condition ensures that they will
only anneal with an exact match. If you were to lower the temperature, there could be
mistakes in the base paring between the primers and the template strands but they
would still anneal. Stringency is how precisely the conditions are to ensure exact
matches or allowing for some play.
 Temp: Higher temp, higher stringency (this is in the annealing step)
 The concentration of magnesium (magnesium influences if the primers will anneal)
- Magnesium is a positively charged divalent cation which will mess with the H-
bonding b/c it’s a positive charge.
3) There can be one codon coding for AAs or different versions of codons coding for
AAs. Some have only one codon yet some have 6.
4) Leucine, serine and arginine – they all have possibilities that code for them, 6
different codons each. Six fold means that there are six different versions of codons
that code for the single amino acid
- WDGQ (peptide sequence)
- Let’s assume we know a particular protein isolated from several different types of
birds: the love bird, the tweety bird, the cartoon bird and the parrot.
- We know this particular protein has these particular AAs in part of the protein. We
are looking at a very specific protein and we know that part of the protein has these
four AAs. Notice that these four AAs are identical.
- Let’s assume we get a grant and go to Antarctica and we want to isolate the penguin
gene that codes for this protein. We want to figure out what the gene is for coding this
Unlock document