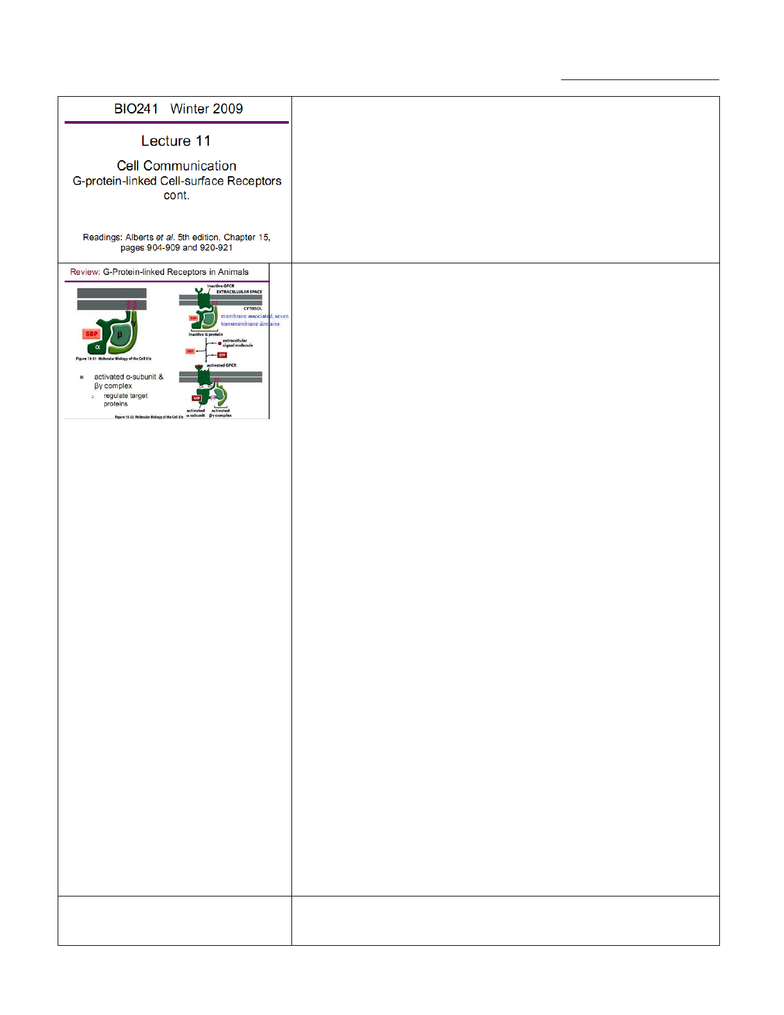 Tuesday, February 10, 2009
- We continue with cell communication and basically how cells
communicate with each other.
- Recall from the last lecture we went through an overview of different
receptors found in animal and plant cells. We went through the
example of G protein coupled or G protein linked receptor.
- We will continue on with G protein linked receptors today. Recall that
G protein linked or G protein coupled receptor is membrane associated
usually with 7 transmembrane domains & it has a ligand binding
domain at the N terminus which also has a component of the ligand
binding domain usually that’s part of one of the transmembrane
domains.
- Now normally it is inactive in the absence of the ligand but when the
ligand binds, there is a conformational change in the G protein coupled
receptor that leads to activation or conformational change on the
cytosolic side of the G protein coupled receptor thereby activating it.
- Now these G protein coupled receptors are often associated with
trimeric G proteins. Here is a blow-up of one of these trimeric G
proteins, it is made up of 3 subunits: alpha, beta and gamma. The alpha
and the gamma subunits are associated with the PM through fatty acid
modifications so they’re anchored in the plasma membrane to these
fatty acid modifications.
- The alpha subunit is a GTPase. That is why these are called trimeric G
proteins, these have GTPase activity or the alpha subunit has GTPase
activity. In the inactive form, the alpha subunit is bound to GDP shown
in the slide.
- When there is an extracellular signal or ligand that binds to the G
protein coupled receptor, it induces a conformational change, activates
the receptor. This is transmitted to the cytosolic side and now the G
coupled protein receptor can activate the G proteins.
- The G proteins, the trimeric G protein in this case, the alpha subunit,
the GDP is replaced for a GTP, this leads to activation of the trimeric
G protein and then what happens next is these two components, the
alpha subunit and the beta-gamma subunit are then activated and can
go on and activate different cellular components. We saw how the
alpha subunit can activate adenyl cyclase last time.
- He knows there is discussion about whether the alpha and beta-gamma
subunits stay together, in some cases they will stay together and they
can activate components together, and in many cases, they separate
from each other so the alpha subunit can go and activate a specific
cellular target and the beta-gamma subunit can also go and activate a
cellular target. It’s not that important whether they act together or not,
it is important to know that they become activated by the G protein
coupled receptor and both the alpha and beta-gamma subunits can then
go and target their cellular targets.
VIDEO
- So we had tried to get this movie working last time and it goes over
basically G protein signalling and it will work today.
- Many G protein coupled receptors have a large extracellular ligand
www.notesolution.com
Unlock document 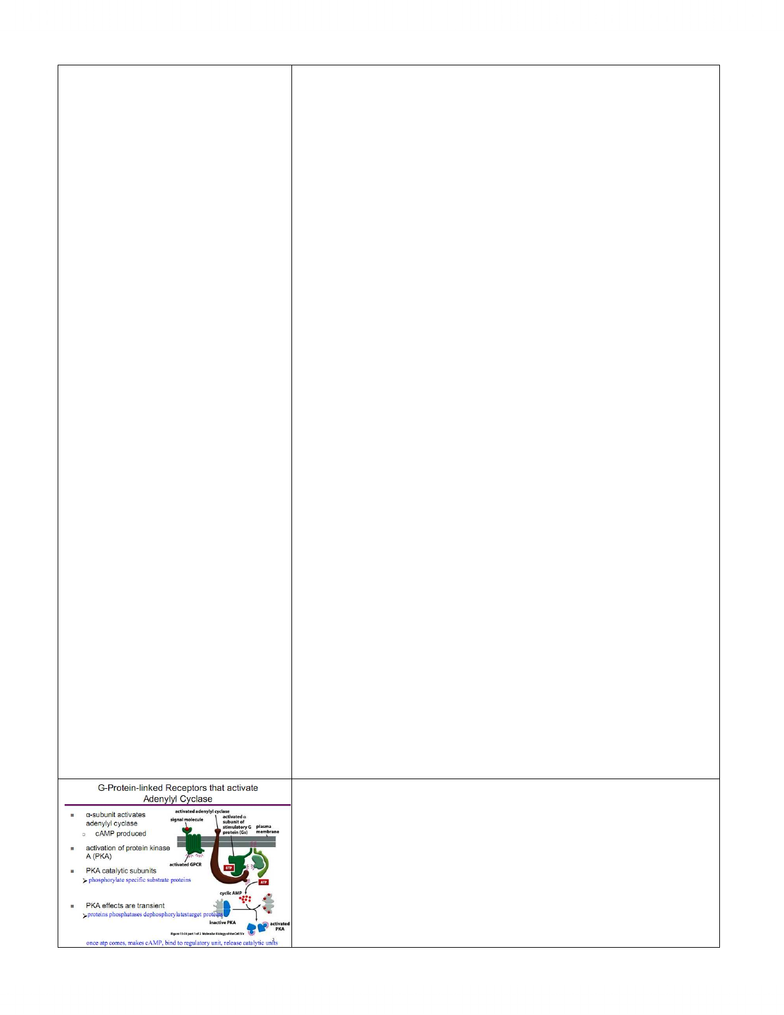 binding domain. When an appropriate protein ligand binds to this
domain, the receptor undergoes a conformational change that is
transmitted to its cytosolic regions which activate a trimeric GTP
binding protein or G protein for short.
- As the name implies a trimeric G protein is composed of 3 protein
subunits called alpha, beta and gamma. Both the alpha and gamma
subunits have covalently attached lipid tails that help anchor the G
protein in the plasma membrane. In the absence of a signal, the alpha
subunit has a GDP bound and the G protein is inactive.
- In some cases, the inactive G protein is associated with the inactive
receptor while in other cases, it only binds after the receptor is
activated. In either case, an activated receptor induces a
conformational change in the alpha subunit causing the GDP to
dissociate.
- GTP which is abundant in the cyotosol can now readily bind in place
of the GDP. GTP binding causes a further conformational change in
the G protein activating both the alpha subunit and the beta gamma
complex. In some cases, as shown the activated alpha subunit
dissociates from the activated beta-gamma complex whereas in other
case, the two activated components stay together. In either case, both
of the activated components can now regulate the activity of target
proteins in the PM as shown here for a GTP bound alpha subunit.
- The activated target proteins then relay the signal to other components
in the signalling cascade. Eventually the alpha subunit hydrolyzes its
bound GTP to GDP which inactivates the subunit. This step is often
accelerated by the binding of another protein called a regulator of G
protein signalling or RGS.
- The inactivated GDP bound alpha subunit now reforms an inactive G
protein with a beta-gamma complex turning off other downstream
events.
- As long as the signalling receptor remains stimulated, it can continue
to activate G proteins. Upon prolonged stimulation however, the
receptors inactivate even if their activating ligands remain bound. In
this case, a receptor kinase phosphorylates the cytosolic portions of the
activator receptor. Once a receptor has been phosphorylated in this
way, it binds with high affinity to an arrestin protein which inactivates
the receptor by preventing its interaction with G proteins. Arrestins
also act as adaptor proteins and recruit the phosphorylated receptors to
clathrin coated pits from where the receptors are endocytosed and
afterwards, they can either be degraded in lysosomes or activate new
signalling pathways.
- So that goes over how G proteins coupled receptors transmit their
signals to the G proteins & then they go on & activate target proteins &
we looked at one of those target proteins & that is adenylyl cyclase.
! Phosphorylate specific substrate proteins
! Proteins phosphatases dephosphorylates target proteins
- An adenylyl cyclase will produce cyclic AMP from ATP in the cell.
- What happens downstream from that, how does cyclic AMP actually
transmit a signal to downstream signalling components in the cell?
- This is just an overview, here would be the activated G protein coupled
receptor bound to its ligand, this will activate the G alpha and the beta
gamma complex. These, especially the G alpha subunit when it is
activated can go and activate an adenylyl cyclase molecule. Then the
activated adenylyl cyclase will produce cyclic AMP from ATP.
www.notesolution.com
Unlock document 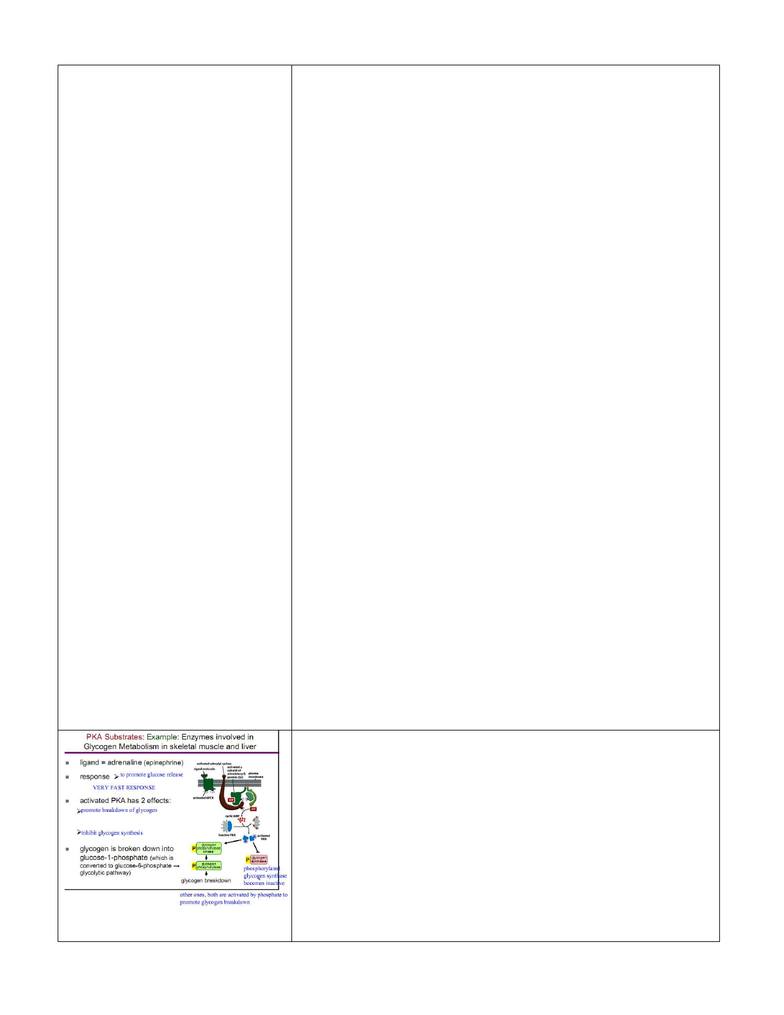 - What happens next in many cell types, one of the targets of cyclic
AMP is a protein kinase called protein kinase A. Protein kinase A will
be activated by the presence of cAMP in many cell types & then it
goes on to do many different things depending on what the cell type is.
- We’re just going to go over one example to give us a fundamental
understanding of how protein kinase A is activated and then transmits
the signal down to its downstream components.
- Protein kinase A can basically be divided up into two components: two
catalytic subunits and two regulatory subunits. In the absence of
cAMP, the regulatory subunits are bound to the catalytic subunits and
this forms an inactive protein kinase A molecule. Once cAMP gets into
the cell, cAMP binds to the regulatory subunits of protein kinase A and
then regulatory subunits will dissociate from the catalytic subunits.
This is induced by the binding of cAMP to these regulatory subunits.
Once the catalytic subunits are released, these are active and this is
what is called activated protein kinase A. These catalytic subunits will
then go to phosphorylate specific substrates or proteins in the cell and
these will vary depending on the type of cell we’re dealing with.
- There are two major levels of the activation that can occur by PKA.
One of them is very fast activation of specific responses and this will
basically be the phosphorylation of a specific kinase, for example or
specific protein that then goes on and degrades glycogen for example
or is involved in other metabolic processes. That is a very rapid
response, PKA phosphorylates something and the target does
something immediately to benefit the cell.
- There are also slower responses, we will have examples of both of
these. Slower responses require transcriptional changes in the cell so
PKA needs to activate a specific transcription factor and then that a
transcription factor will activate or transcribe specific genes in that cell
type and then those transcripts will produce proteins that will produce
the metabolic response of interest. Those are slower responses so two
different levels of responses.
- The effects of PKA on cells are transient. The reason for that is that
once PKA phosphorylates its target proteins, there are many protein
phosphatases in the cell that will dephosphorylates those proteins and
inactivate them so PKA is phosphorylating those target proteins to do
something, activate them or in some cases inactivate them, but then
there are phosphatases that are antagonizing that effect by removing
phosphate groups. The effects of protein kinase A are very transient
due to the presence of these protein phosphatases that will remove the
phosphate groups that have been added.
! To promote glucose release
! Promote breakdown of glycogen
! Inhibit glycogen synthesis
- One cell type we’ll go into more detail is liver and skeletal muscle
cells where PKA plays an important role.
- Now in these types of cells one of the major storage forms of glucose
in animal cells is called glycogen.
- Adrenaline or epinephrine, one of the responses to adrenaline is the
release of glucose from these cells from the glycogen stores so how
does adrenaline, which is the ligand for G-protein coupled receptors
actually activate or induce the release of glucose from glycogen stores?
So the response is to promote glucose release from these glycogen
stores.
www.notesolution.com
Unlock document