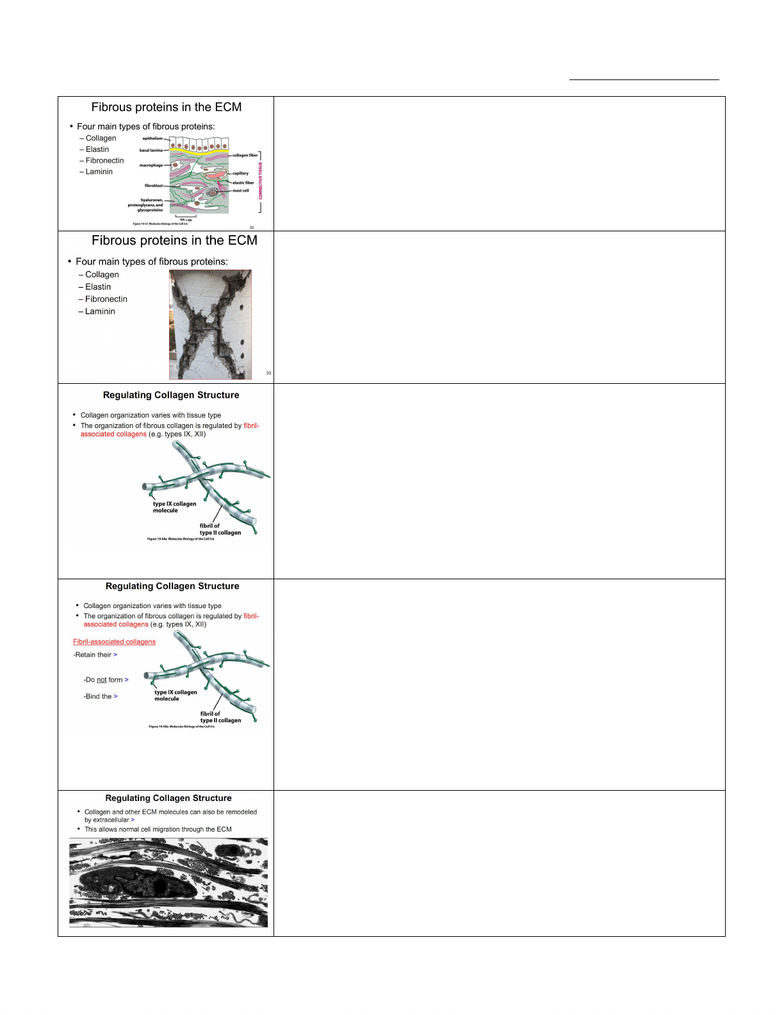 Thursday, March 12, 2008
- We ended last day talking about collagen, which is one of four types of
fibrous proteins, so now we’ll talk about these other three. These fibrous
proteins run through the extracellular matrix providing structural support
similar to how cables would run through reinforced concrete.
- This is the concrete with cables.
- We learned how collagen could form these long bundled structures running
through tissues, but collagen, its organization can vary with tissue type. You
can imagine that for example in a tendon, you may want a whole bunch of
collagen fibres to be in parallel to form that tendon structure. Underlying our
skin however where it is more of a plane, you would want more of a
meshwork of criss-crossed collagen molecules to support our skin.
- Different tissues call for different organization of collagen and the
organization of fibrous collagen is regulated in large part by these fibril
associated collagens so there are different types listed.
- Here is our large fibril of collagen and these here are the non-fibril collagen
molecules attached to the side. These will decide whether these fibrils will
run in parallel or criss-cross structure.
! Propeptides after secretion
! Fibrils
! Surface of collagen fibrils
- These fibril associated collagens are similar to real collagen that forms
fibrils except these ones retain their propeptides after they are secreted from
the cell. We saw for collagen, these collagen molecules that form fibrils have
propeptides on them that blocks their formation into larger fibrils before they
go outside the cell. Then those propeptides are removed to make these fibrils
but for these fibril associated collagens, they are not removed. These ones do
not form fibrils and instead they bind to the surface of the collagen fibrils and
reshape and organize them in different ways.
- That is one way that the extracellular matrix can be remodelled and
organized in a specific way.
! Protease
- Another way is that collagen and other extracellular matrix molecules can
also be remodelled is by extracellular proteases. This allows for cells to
migrate through the extracellular matrix.
- This is a picture right here discussed last day about how this is a fibroblast
which is creating these collagen molecules and these fibroblasts and white
blood cells and other cells in the connective tissue must be able to crawl
around within this tissue.
- How do they get through this network of ECM molecules? They can make
www.notesolution.com
Unlock document 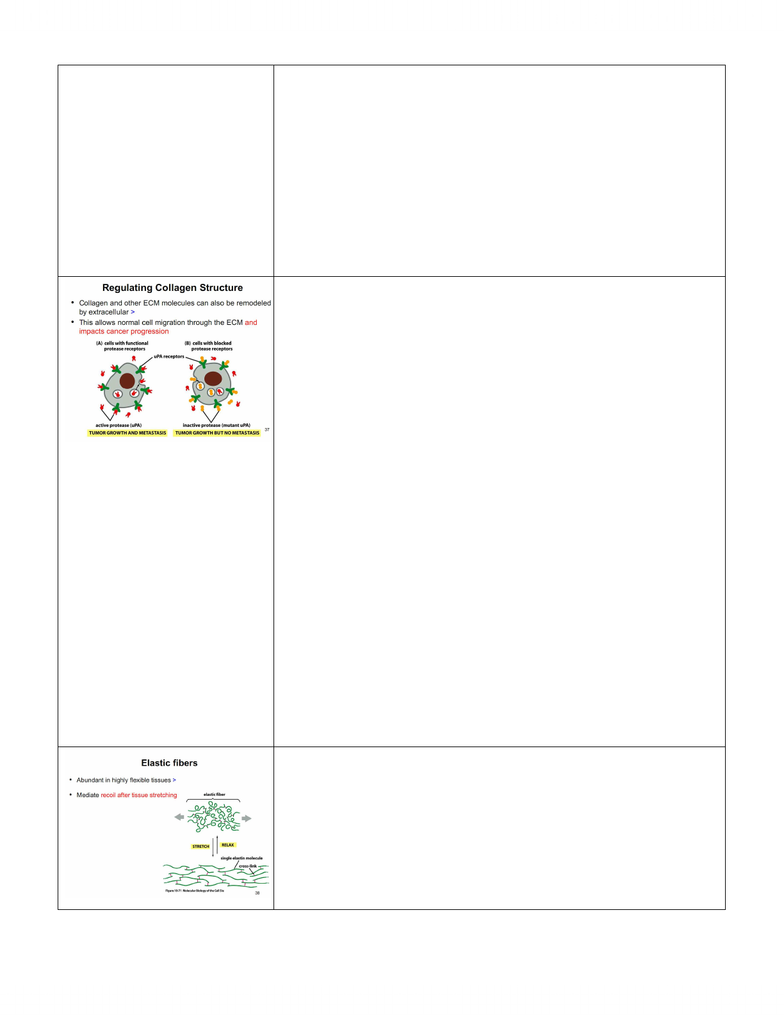 use of proteases to actually cut these molecules, chop them so they can go
through. The action of these protease, this has to be highly regulated so you
should note that these molecules, the proteases are secreted from cells in an
inactive form, and they’re normally secreted along with inhibitors so you
secrete the proteases and also inhibitors of those proteases. Generally you
don’t want these proteases to work except in very specific circumstances. If
you sent out active proteases into the ECM, it would digest the entire ECM
and it would be gone. These inactive molecules are sent out into the
extracellular space and normally their activity is controlled by binding to the
surface of the cell that wants to use them. These inactive molecules will bind
to the surface of the cell & therefore be locally activated & very specifically
controlled. You have very specific digestion of the extracellular matrix where
you need a fibroblast to crawl through it or a white blood cell, etc.
! Proteases
- In addition to these cell types, this is also relevant to cancer progression. As
we’ll learn about and as we’re all aware, we will have a primary tumour and
then as cancer progresses, the cells will start to migrate away from that
primary tumour to other sites in the body. To migrate from the primary
tumour, those cells also have to travel through the extracellular matrix. They
also make use of proteases to do that.
- It is important to know about these proteases because there is the potential
to develop drugs to block the ability of cancer cells to travel through the
extracellular matrix so you might be able to slow down the progression of
cancer, stopping them from spreading through the extracellular matrix.
- That is just shown in the cartoon. There is a tumourous cell that is growing
and metastasizing, moving through the extracellular matrix. It is doing that
here because it has these uPA receptors being expressed so therefore it is
recruiting this protease called uPA to the surface of the cell and activating it
there. Now this cell will have active proteases coating its surface so when it
comes into contact with extracellular matrix, it can chop those proteins up
and travel through that extracellular matrix.
- On the other side, there is an inactive form of the protease that is being
expressed, this is competing away the normal protease so most of these
receptors on the surface of the cell are now bound to inactive proteases. You
can imagine in this case, this is a mutant form of the protease that
outcompetes the normal form but you could also imagine that these yellow
molecules could be a drug that could be given to a cancer patient. So you can
add a competitor of these active proteases that could compete with those
proteases for the receptor, basically bump them off the receptors & now this
cell here, it may still grow but it will be much more difficult for it to travel
through the ECM becoming more contained in the body, preventing
metastasis.
! (e.g. blood vessels, lungs)
- Now onto elastic fibres. These fibres also provide structural support but as
the name implies, they are elastic. These are abundant in highly flexible
tissues like blood vessels or lungs so that when your lungs expand, they will
snap back to their original position; when the blood vessel expands, it will
snap back to its original position.
- A number of our organs have this elastic property so elastin plays a key role
in this because it can recoil after tissue stretching.
- In the cartoon, we have the elastic fibre that can be stretched out and then
snap back afterwards.
www.notesolution.com
Unlock document 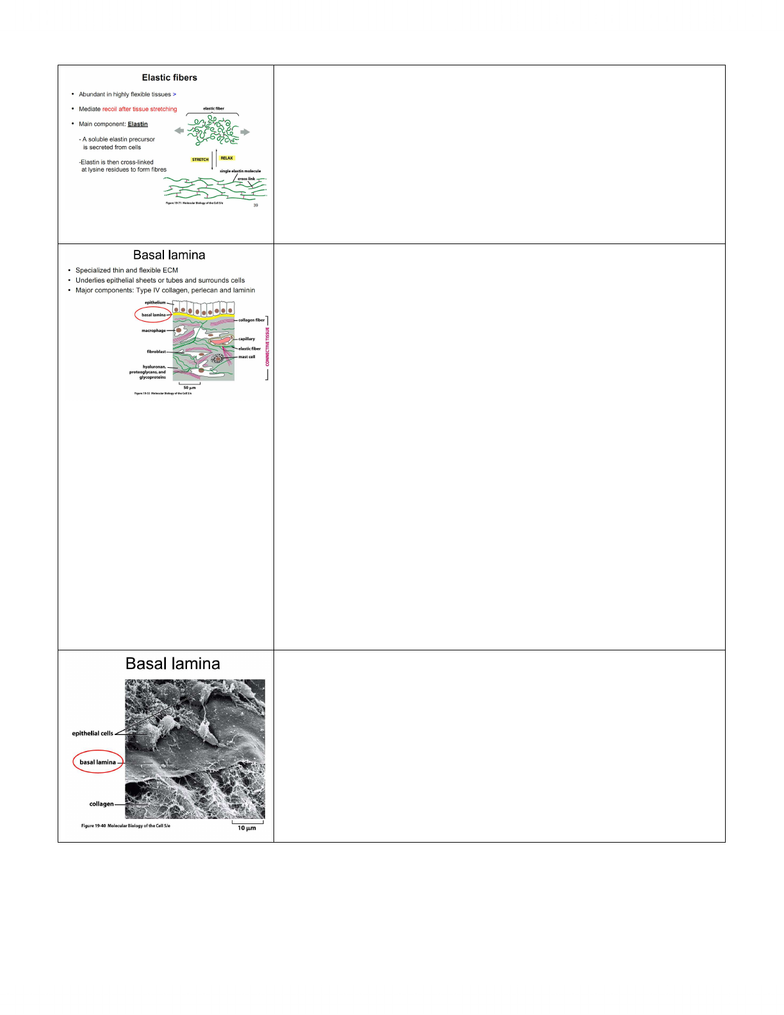 ! (e.g. blood vessels, lungs)
- The main component of this is a protein called elastin shown in green. That
is one polypeptide there in the green. The soluble elastin precursor is secreted
from cells. This is similar to collagen where you can’t assemble these huge
protein cables inside of a cell b/c they're actually larger than cells so they
have to be secreted out as the subunits & then form the fibre outside of the
cells.
- In this case, to form this fibre, these individual elastin molecules are cross-
linked together at lysine residues shown in the red dashes. So there are
covalent bonds between lysine residues that are connecting these subunits
together making a really strong structure which can then stretch and relax.
- What we talked about so far is this picture right here & he really likes this
picture b/c you can touch your hand & imagine what is under the skin,
imagine what is making up the structure of the body, imagine the outer
epithelium, the skin, below that you have the epithelium, then you’ll go into
the ECM, you may hit a the capillary which is a blood vessel with another
epithelial cell layer or you might hit another body organ, you might get to the
stomach, you go in & hit the epithelial layer of the stomach, the lumen of the
stomach inside, so here you have an epithelium with an apical surface as well
as a basal surface. There is another epithelium with apical surface facing the
lumen & the basal surface facing this connective tissue.
- The molecules we’ve been talking about are these collagen fibres, the
elastic fibres, which provide tensile strength to the space in b/w cells & also
the GAGs & the proteoglycans that act as space fillers to fill up the tissue &
provide resistance to compression. When you look at the cells here too,
we’ve looked at the fibroblast, they are the cells that secrete the ECM
molecules. We just talked about now how both microphages & fibroblasts
can remodel the ECM with proteases to chew it up & travel through the
ECM.
- For these larger assemblies of cells, the epithelial cells & also muscles not
shown in the picture, how do they connect to the ECM? There is a very
specialized layer called the basal lamina that sits at the basal surface of these
cells, the basal surface of epithelial cells & surrounds muscle cells. This is a
specialized thin & flexible ECM, it underlies epithelial sheets or tubes &
surrounds cells such as muscle cells & is formed of these components in the
slide.
- Here is an electron micrograph showing what this structure looks like.
Basically an epithelium has been peeled away so that here we see the edge of
an epithelial cell right in the slide. This whole thing up there is the epithelial
cell, this thing that looks like a sheet is the basal lamina. The epithelial cell
sits on it and underneath this basal lamina, we have these collagen fibrils so
this is the protein network, the connective tissue underneath the basal lamina.
- Now it has been found that if there are defects between these cells and the
basal lamina, this leads to blistering diseases in epithelia. The epithelium will
lift off the basal lamina creating blisters and defects here also lead to
muscular dystrophy where you have detachment of the muscle from the
extracellular matrix. So the muscles detach are therefore weakened.
www.notesolution.com
Unlock document

We ended last day talking about collagen, which is one of four types of fibrous proteins, so now we"ll talk about these other three. These fibrous proteins run through the extracellular matrix providing structural support similar to how cables would run through reinforced concrete. We learned how collagen could form these long bundled structures running through tissues, but collagen, its organization can vary with tissue type. You can imagine that for example in a tendon, you may want a whole bunch of collagen fibres to be in parallel to form that tendon structure. Underlying our skin however where it is more of a plane, you would want more of a meshwork of criss-crossed collagen molecules to support our skin. Different tissues call for different organization of collagen and the organization of fibrous collagen is regulated in large part by these fibril associated collagens so there are different types listed.