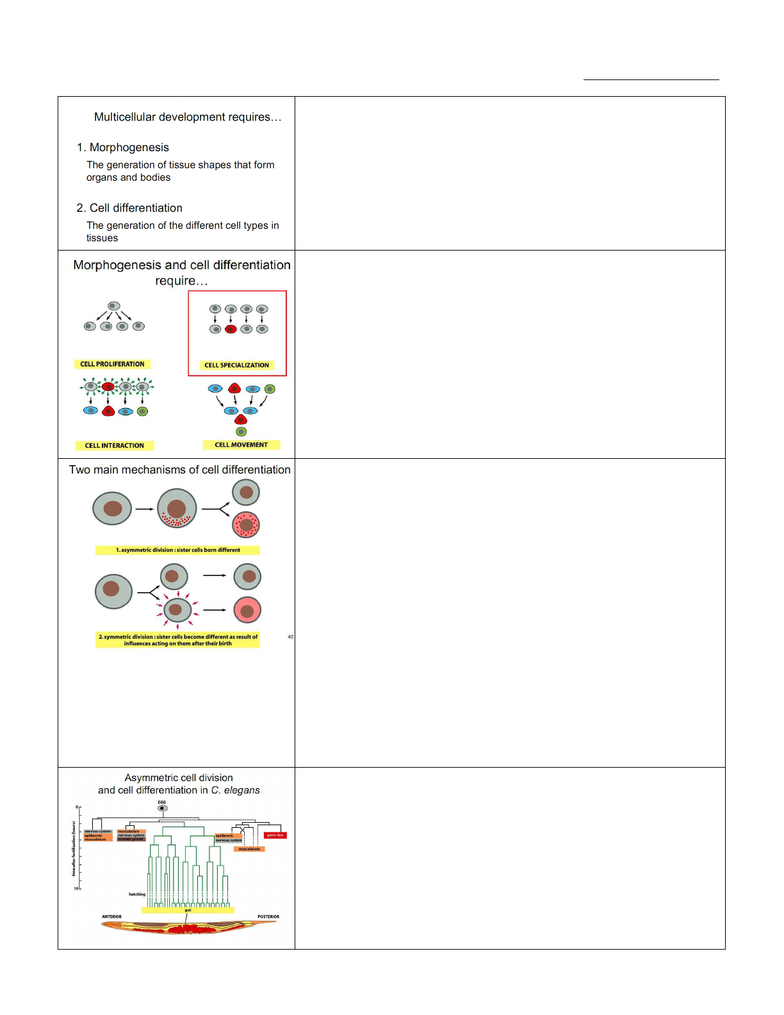 Thursday, April 2, 2009
- Last day we talked about multicellular development, talking about how
cells can change their architecture to create specific tissues, to create
tissue structure and that is morphogenesis.
- Today we will talk about cell differentiation which is important for
telling cells what to do. How do those cells know to undergo those
morphogenetic mechanisms, how does a cell know to turn into a liver cell
or a heart cell? There have to be mechanisms to distinguishing one cell
from another.
- This is what we’re talking about here, distinguishing one cell from
another. Then once they’re distinguished, they can then have different
properties in terms of cell proliferation, cell-cell interaction, cell
movement or cell shape changes to create tissue form.
- Cell differentiation occurs in 2 main ways. There are intrinsic
mechanisms and there are extrinsic mechanisms.
- This is very important to understand, so the asymmetric division is one
way you can have cell differentiation through an intrinsic mechanism.
Here you start off with one cell, now there is some asymmetry within this
cell that when the cell divides, one daughter will inherit certain
cytoplasmic material & the other daughter inherits another type of
cytoplasmic material. The proteins inherited by the bottom daughter will
give the cell different properties than the other daughter cell above it.
This is intrinsic, it is happening just from the redistribution of proteins
within the cell.
- The other mechanism is extrinsic, and so this can occur during the
development of the embryo, these cell will still be dividing so you still
need to grow all the cells making up the body but in this case they would
divide symmetrically, they would be the same based on division. One of
the daughter cells would then be influenced by outside signals that the
other one isn’t influenced by and the outside signals then change this cell
and convert it to a different cell from the other daughter cell.
- Cells can differentiate from either internal or external signals.
- An example of intrinsic cell differentiation comes from asymmetric cell
division in C. elegans, the nematode worm, shown at the bottom of the
slide. This has become a very valuable model system for developmental
biology.
- One interesting strength that it has is that every single cell division
starting from the fertilized egg has been mapped until you form this final
worm. People know exactly starting from that egg, what those 2 cells turn
into then following that division see what those cells turn into all the way
down the line until you form this full worm. You create a lineage of cells
that you can follow until you form the different parts of the worm, the
gut, the vasculature, the nervous system and so on.
www.notesolution.com
Unlock document 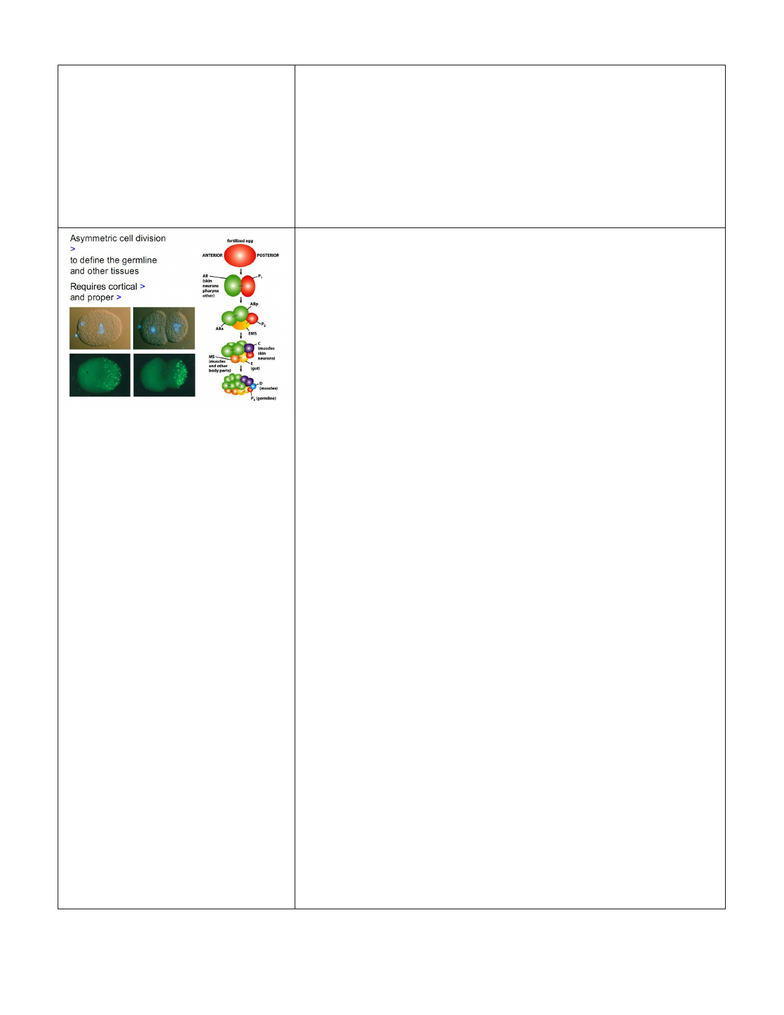 - You can see at the top, the fertilized egg, its first division forms two
lineages on the left and right, these lineages are very different from one
another so this one on the left is making the nervous system and the other
linage is pretty much making everything else, musculature and the gut.
- So is this differentiation of these 2 cell lineages, is this from an extrinsic
mechanism or an intrinsic mechanism? What people found when people
looked at these eggs was they found proteins on one side of the egg & not
on the other side implicating this was an intrinsic mechanism not
extrinsic, an asymmetric cell division & it is described further in the next
slide.
! Partitions cell fate determinants
! Polarity
! Spindle alignment
- So in these pictures right here, we can see the individual fertilized egg,
this one nucleus in the middle so it’s a single cell. We are looking at the
division that is about to occur here. In this picture we’re looking at the
same cell but we are looking at a fluorescently marked protein in the cell
and this fluorescently marked protein is specifically on this half of the
single cell so it is specifically partitioned to one side of the cell. So this
and other cell determinants, a set of cell-fate determinants will be on one
side of the cell and a whole other set of cell-fate determinants proteins
that affect cell fate will be found on the other side.
- We talked about this a bit during discussion of cell division, if the
spindle then aligns horizontally to split the DNA, then cytokinesis splits
the cell vertically, now these cell fate determinants will be specifically
partitioned into the right daughter cell & not the other daughter cell. So
this asymmetric cell division partitions these cell fate determinants and
this defines the germ line in other tissues.
- This requires 2 types of asymmetry, one major asymmetry is this
cortical polarity, the cortex is just under the PM so you have this polarity
there that needs to be asymmetric and then the cell needs to properly
align the mitotic spindle in the direction of that asymmetry so that only
one of the daughters will gain these proteins and the other one won’t.
- This is illustrated up here as well, here is the fertilized egg, when this
divides, this cell will be different from this cell and you can follow these
divisions going down through the first stages of embryogenesis. You can
see some, then there’s another division plane marked by the black line,
this is also an asymmetric division, another with the purple and orange,
etc. There is one that is symmetrical as well, both daughters are the same
(the green ones) & they continue to be the same throughout many further
divisions. You can see asymmetric cell division can distinguish some of
the cell types in the embryo but there is also these symmetric cell
divisions going on. These cell types have to be distinguished by external
mechanisms so these extrinsic signals which will then make this cell
different from the other.
- Now he will discuss a few examples of this. For the rest of the lecture
we’ll be talking about external signals determining cell fate and
differentiation. What we’re looking at here is the creation of patterns in
the embryo, so we have extrinsic signals signalling between cells creating
patterns across the embryo and then that pattern of cell differentiation
then leads to patterns of morphogenesis. You have an arm & a head
forming in a proper place & so on in an embryo.
www.notesolution.com
Unlock document 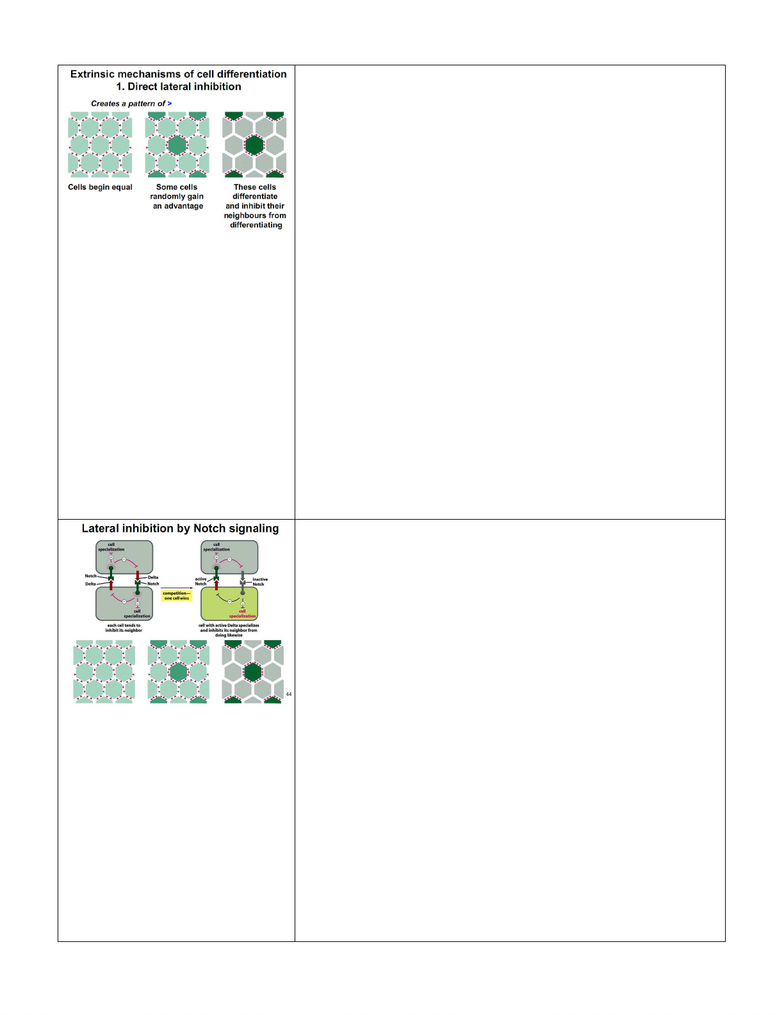 ! Isolated differentiated cells
- The first example he wants to talk about is direct lateral inhibition. The
pattern that this signalling will create is a pattern of isolated
differentiated cells.
- The final pattern is shown in the right slide where each of these green
hexagons are cells and you can see the dark green one has differentiated,
it is different from the surrounding ones, it is separated from the other
differentiating cells.
- So this is a very nice way to say separate neurons throughout the body
so that they’re not just clustered in one area in the tissue & actually
spread out throughout the tissue. That is one way that this type of
patterning is used.
- Now the way this arises is first of all, the cells all begin equal, the light
green on the left means none are differentiated, none of the cells are
differentiated & these little red Ts here, this means that all of these cells
are inhibiting one another. They are all inhibiting one another from
differentiating so if there is no differentiation & all the cells are inhibiting
one another, stopping each other from differentiating.
- But then just randomly, some of these cells will gain an advantage, they
will start to differentiate & gain the ability to inhibit their neighbours
more strongly. They won’t be affected by inhibition from surrounding
cells very much because these ones become weakened, the darker green
becomes stronger & inhibits the surrounding cells more strongly. This
inhibition eventually turns off all of the signals for inhibition in the
surrounding ones & then you’re left with this one cell in the middle that
is now differentiated & fully inhibiting neighbouring cells from
differentiating. This is where you can have this pattern of separated
individual differentiated cells.
- Let’s discuss this in more detail and turn to the molecular mechanism at
work here.
- This inhibition, these inhibitory arrows here, this signal is through 2
receptors, one called delta & one called notch. This produces a negative
signal from the bottom cell to the top cell. The cell expresses delta which
activates notch & notch blocks the cell from specializing/differentiating.
That now is happening throughout the whole field of cells evenly so they
are all sending this negative signal across that blocks the neighbouring
cells from differentiating.
- The signal is also doing something else critical for this mechanism to
work properly: this negative signal is inhibiting the negative signal that
this cell is returning back to the original cell. So these negative signals,
the bottom cell is sending a negative signal to the top cell & vice versa.
Both signals are blocking the differentiation of the cells but both signals
are also inhibiting each other’s negative signals so there is a balance
there.
- What happens next is that in the middle stage is that one of these cells
starts to express more activated delta which activates more notch. You
have more of this negative signal there and this just happens randomly so
just one of the cells will randomly start to express more delta or activate
more notch & you have more of this inhibitory signal. When you have a
little bit of this negative signal increase in the bottom cell, this will
inhibit the negative signal coming back to the cell. So now you have
decreased negative signal coming back to the bottom cell meaning this
allows the bottom cell to start specializing a little bit b/c by increasing
delta you increase inhibition of the negative signal that is coming back.
www.notesolution.com
Unlock document

Biology: Science for Life with Physiology

design an experiment that would allow you to distinguish between potential presynaptic mechanisms. Provide results that would support different mechanisms.

1. How are the components and mechanisms that tumor viruses have cause cancer? How is this similar to how cellular proto-oncogens are activated? And how are they different? Are there ways to block these mechanisms?

2. Are the following oncogens categorized as a change in structure and function or a change in expression? Or both. Please explain.