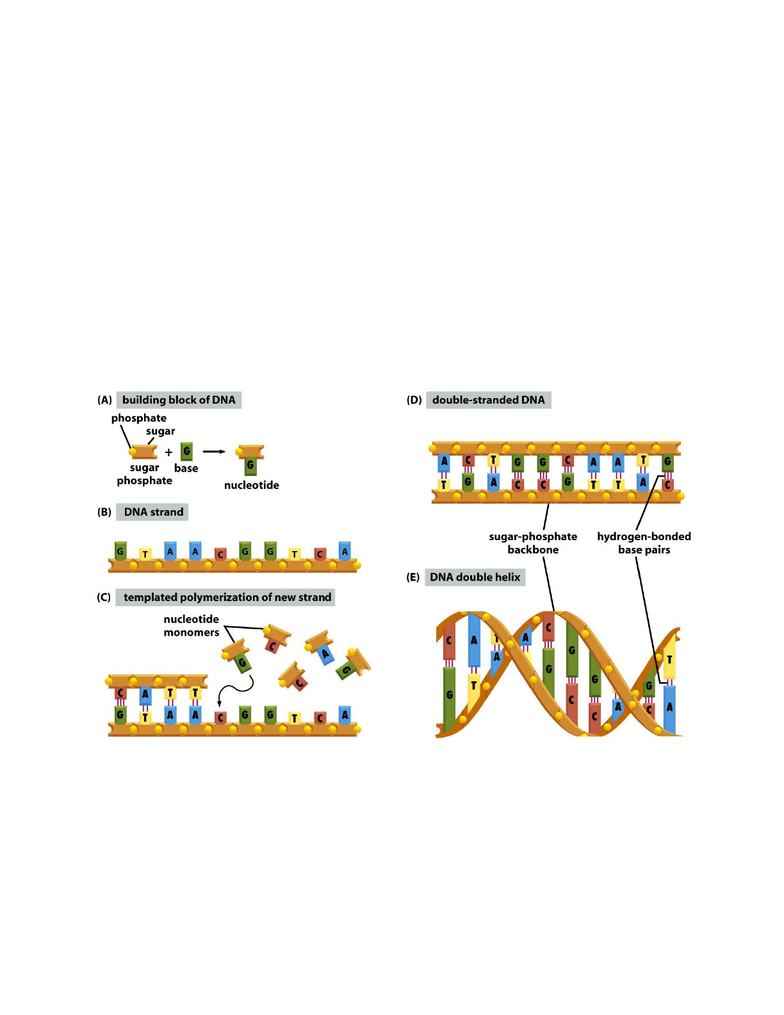 Chapter 1 – Introduction to the Cell
THE UNIVERSAL FEATURES OF CELLS ON EARTH
 Heredity is central to the definition of life: it distinguishes life from other processes
 The single cell is the vehicle for the hereditary information that defines the species
 It includes the machinery to gather rat materials from the environment, and to construct out of them a new cell
in its own image, complete with a new copy of hereditary information
All Cells store their hereditary information in the same linear chemical code (DNA)
 All cells store their heredity information in double stranded DNA: long unbranched paired polymer chains
All cells replicate their hereditary information by template polymerization
 Each nucleotide (monomer) consists of two parts: a deoxyribose sugar with a phosphate group attached and a
base (ATCG)
 Each sugar is linked with the next phosphate group creating a polymer chain
 DNA is synthesized from a template formed by a pre-existing DNA strand
 AT (2 H bonds) and CG (3 H bonds)
 Two strands twist to form a double helix
 Individual sugar-phosphate units are asymmetric, giving the backbone of the strand a definite directionality or
polarity which guides the molecular processes by which the information in DNA is interpreted and copied in
cells: information is always read in a consistent order
 A normal DNA consists of two such complementary strands; the nucleotides within each strand are linked by
strong covalent chemical bonds
 Bonds between the base pairs are weaker than the sugar-phosphate links, allowing the 2 DNA strands to be
pulled apart without breaking the backbone
 DNA replication occurs at different rates with different controls to start/stop it and different auxiliary molecules
to help it along
 Template polymerization is the way in which this information is copied throughout the living world
All cells transcribe portions of their hereditary information into the same intermediary form (RNA)
Unlock document 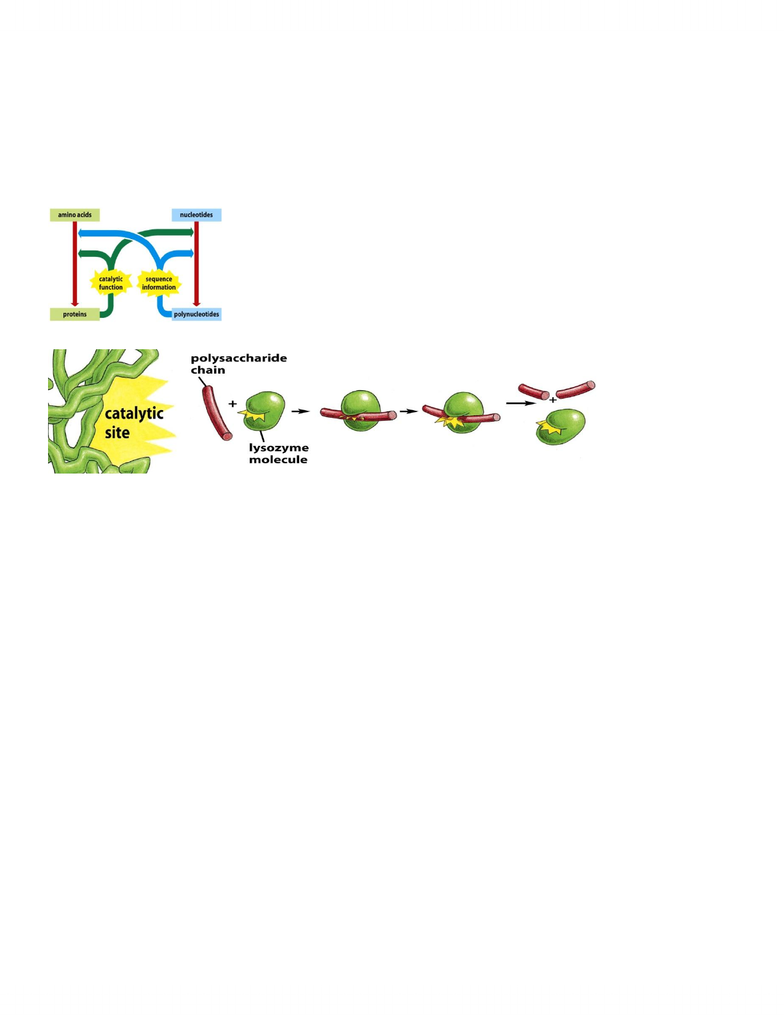  In transcription, segments of DNA sequence are used as templates for the synthesis of shorter molecules (RNA)
 In translation, many of these RNA direct the synthesis of proteins
 RNA: ribose instead of deoxyribose; U instead of T
 DNA is fixed and sacrosanct, RNA transcripts are mass-produced and disposable
 Transcripts mainly serve as an intermediate: messenger RNA to guide the synthesis of proteins according to DNA
 Being single stranded, the polymer chain can bend itself to allow one part of the molecule to form weak bonds
with another part of the same molecule
All cells use proteins as catalysts
 Protein molecules: long unbranched polymer chains, formed by stringing
together monomeric building blocks drawn from a standard repertoire that is the same
for all living cells
 Amino acids: monomers of protein; 20 types; same core structure with side
group that gives each its distinctive chemical character
 Polypeptides: created by joining aa in a particular sequence folds into a precise
3D form with reactive sites on its surface
 Bind with high specificity too other molecules and act as enzymes to catalyze reactions that make or break
covalent bonds
 Proteins also maintain structures, generate movements, sense signals; put the genetic info into action
All cells translate RNA into protein the same way
 mRNA read 3 nucleotides at a time (codon); several codons correspond to the same aa
 code is read out by transfer RNAs; each tRNA is attached to an aa with the anticodon displayed at the other end
 tRNA with the right aa is matched with the mRNA; aa have to be linked to extend the chain; tRNA is released
 process is carried out by the ribosome, formed of two chains of RNA called ribosomal RNAs
 ribosome latches onto the end of mRNA and then trundles along, capturing tRNA and stitching together the aa
The fragment of genetic information corresponding to one protein is one gene
 each segment coding for a different protein -> gene
 RNA molecules transcribed can often be processed in more than one way, giving rise to a set of alternative
versions of a protein
 A gene is the segment of DNA sequence corresponding to a single protein or set of alternative protein variants
or to a single catalytic or structural RNA molecule for those genes that produce RNA but not protein
 The expression of individual genes is regulated
 The cell adjusts the rate of transcription and translation of different genes independently, according to need
 Stretches of regulatory DNA are interspersed among the segments that code for protein, and these noncoding
regions bind to special protein molecules that control the local rate of transcription
 Other noncoding DNA define where the information for an individual protein begins and ends
 The quantity and organization of the regulatory and noncoding DNA vary widely from organism to organism
 Genome: the total of its genetic information as embodied in its complete DNA sequence
Life requires free energy
Unlock document 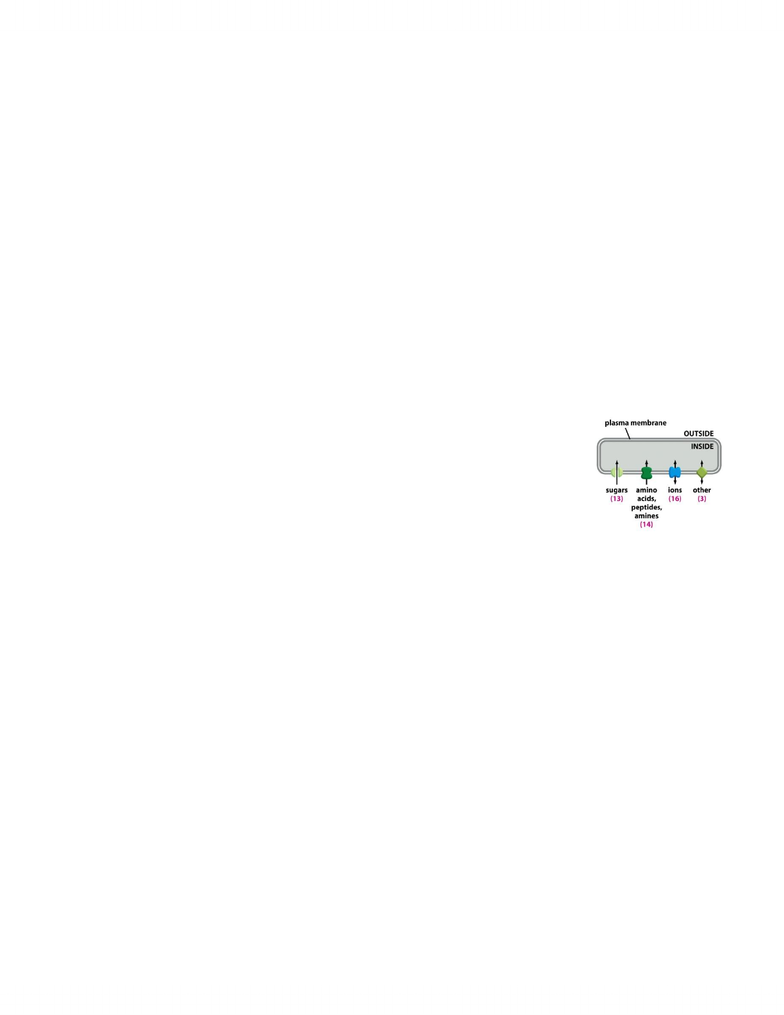  For a cell to grow or to make a new cell in its own image, it must take in free energy from the environment, as
well as raw materials
 Free energy is required for the propagation of information
All cells function as biochemical factories dealing with the same basic molecular building blocks
 All cells have to contain and manipulate a similar collection of small molecules
 All cells require ATP as a building block for the synthesis of DNA and RNA
 Many of the details of their small molecule transactions differ
 Some organisms require only the simplest of nutrients and harness the energy of sunlight to make from these
almost all their own small organic molecules
 Others feed on living things and obtain many of their organic molecules ready-made
All cells are enclosed in a plasma membrane across which nutrients and waste materials must pass
 Each cell is enclosed by the plasma membrane
 Acts as a selective barrier that enables the cell to concentrate nutrients gathered from its environment
 Retain the products it synthesizes for its own use, while excreting its waste products
 Amphiphilic: one part that is hydrophobic and another that is hydrophilic
 Placed in water, aggregate spontaneously to form a bilayer that creates small closed vesicles
 Cells produce molecules whose chemical properties cause them to self-assemble into the structures that a cell
needs
 All cells have specialized proteins embedded in their membrane that transport
specific molecules from one side to the other
 Transport proteins in the membrane largely determine which molecules enter the
cell, and the catalytic proteins inside the cell determine the reactions that those
molecules undergo
A living cell can exist with fewer than 500 genes
 The bacterium Mycoplasma genitalium lives as a parasite in mammals with ready-made small molecules
 Has about 480 genes
 The minimum number of genes for a viable cell in today’s environments is probably not less than 200-300
THE DIVERSITY OF GENOMES AND THE TREE OF LIFE
 Darkest depths of the ocean, in hot volcanic mud, in pools beneath the frozen surface of the Antarctic and
buried kilometres deep in the earth’s crust
 Microorganisms make up most of the total mass of living matter on our planet
Cells can be powered by a variety of free energy sources
 Living organisms obtain their free energy in different ways
 Organotrophic: feed on other living things or the organic chemicals they produce
 Phototrophic: harvest the energy of sunlight; the O in the atmosphere is a by-product of their activities
 Lithotrophic: capture their energy from energy-rich systems of inorganic chemicals in the environment
 Organotrophic organisms could not exist without these primary energy converters
 Phototropic organisms include many types of bacteria, as well as algae and plants
 Lithotrophic organisms are microscopic and live in habitats that humans do not frequent
 Some lithotrophs get energy from aerobic reactions, which use molecular oxygen from the environment
 Other lithotrophs that live anaerobically, in places with little or no molecular oxygen
 Hydrothermal vents: regions where the ocean floor is spreading as new portions of the Earth’s crust form by a
gradual upwelling of material from the Earth’s interior
Unlock document