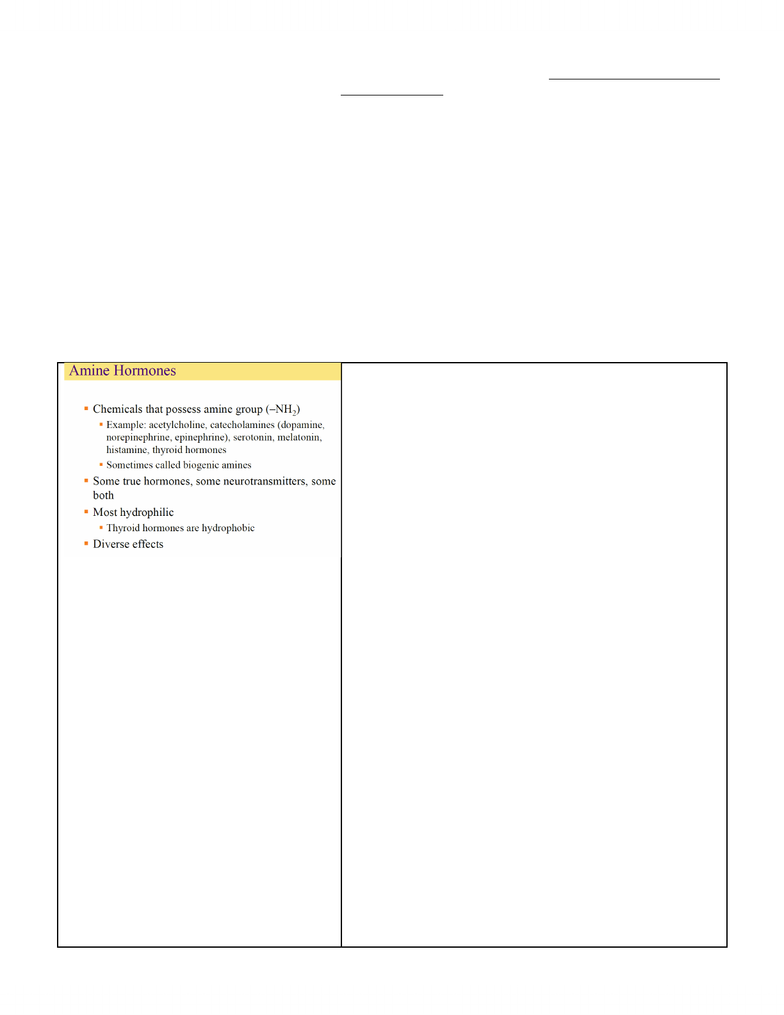 Wednesday, October 28, 2009
BIO270 Lecture 2
- There was a rather Gaussian bell-curve with the test marks so they can’t inflate the marks.
-People usually do quite well in his section. He puts a focus on slightly different aspects than what Dr.
Forder did & some of the questions he’s had from various students were the large numbers of details &
particularly some of the chemistry, there was a lot of chemistry in that material. Well, endocrinology is
really all chemistry so he’s going to be spending a fair amount of time discussing those basic concepts.
You’ll find, he thinks, what you learn in his class will help you with the material from the 1st part.
- Also 20% of the mark is based on the labs & people generally do quite well on the labs so for those who are
concerned about the mark, he would say that statistically the mark will go up. However, if you have
concerns about it, don’t be afraid to go see him about it & if you have the opportunity to go to the help
hours, the office hours, do go.
-**The final isn’t just going to be his questions – one of the problems is that we have to have equal
percentage so there’s going to be roughly 40% of his material, 40% of Dr. Forder’s material & then
20% labs. There will be SOME questions from the 1st section on the final but we haven’t figured out
how many yet. What we will do will be very fair.** He wants us to do well in the course.
- Amine-based hormones, it’s another class of hormones & these
are hormones that are based on amino acids.
- What’s an amino acid? Amino acids have an amine end.
- NH2 is an amino group – you’ll note that it plays a role with
bases & alkalis such like this.
- These amino acids are very interesting b/c in some ways they
act like a base & in some ways, they act like an acid & then they
have a number of very interesting properties & if you ever had a
opportunity to read some of these studies that went back & tried
to understand how life evolved & looked at the development of
the 1st biogenic molecules that occurred before life evolved,
amines, glycine, serine, glutamic acid, these were things that
could be synthesized just with what was considered to be the
primitive atmosphere at the time & some energy source like
lightning or heat, something along those lines. So they’ve had a
very long history, these amine molecules, & b/c of that, they’ve
been exploited in biological systems to do a variety of things &
as a result there are a huge number of these amine based
hormones.
- Serotonin: which is also called 5-HT. He’ll tell us about the
drug afterwards.
- Melatonin: closely related to serotonin, part of the same
synthetic pathway – this is the stuff that makes you go to sleep.
- Thyroid hormones: which are a bit more derived.
- Biogenic amines: they have life-giving properties.
- True hormones: a hormone is something that is actually secreted
into the circulatory system & it moves around. But a number are
neurotransmitters which are associated with the transmission of
one nerve impulse from one neuron to another, but some are
both, a number of them actually.
- Hydrophilic: they are very aqueous, they will prefer water & act
in that way. Of course, there are always exceptions, there is no
rule that does not have an exception. The thyroid hormones are
very hydrophobic b/c they, in some ways, are more like steroids
& how they act.
- And they have a huge gallant of effects. Acetylcholine is the
Unlock document 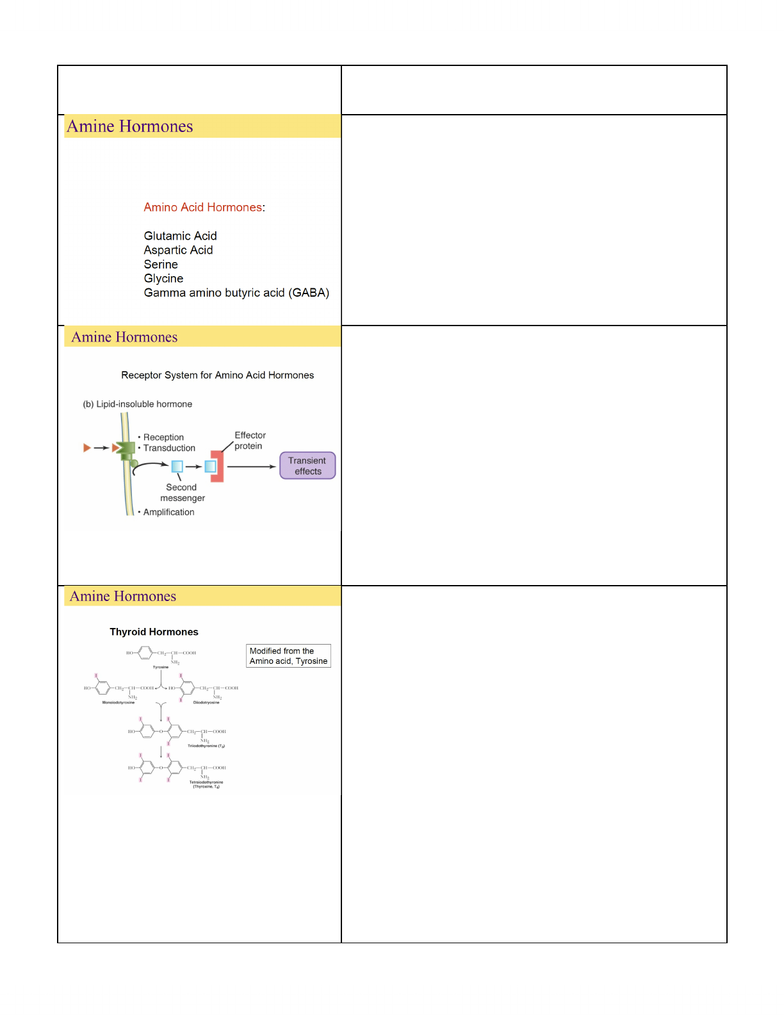 hormone associated with muscle movement; serotonin is the stuff
that gets you all excited & helps with your dreaming & if you’ve
done LSD, it’s the stuff that gives you hives.
- Some of the amino acid hormones that we’re going to be talking
about are listed in the slide.
- GABA acts as a neurotransmitter; glutamic acid acts as a
neurotransmitter to a certain degree & recently, a number of these
things have also been discovered, that they also play a role in
signaling. We’re not entirely sure what they do, but they seem to
& there’s probably others – there’s some evidence that, lycine for
example, also does that. So these are just a couple of examples
but there are probably more.
- Now b/c these are hydrophilic, they like water, obviously they
are lipo-phobic so lipid-insoluble hormones, that means they
cannot cross the plasma membrane.
- So it’s like some of the other systems that we’ve talked about.
Our ligand comes, it binds to the plasma membrane receptor & it
causes a signal transduction cascade & there’s a number of
different systems that will work, we’ll talk about some of them in
this course, & what it will do is turn on a secondary messenger
system
- So here’s our primary effector & now we have a secondary
effector that occurs through an enzyme action associated with the
receptor & then that will bind to a number of what are called
effector proteins, all kinds of them, phosphatases, kinases, there
can be probably hundreds, & then it’d produce usually a series of
transient effects so these will be effects that will tell the cell to do
something – i.e. contract or squirted juice.
Tyrosine  Monoiodotyrosine &
Diiodotyrosine  Triiodothyronine (T3) 
Tetraiodothyronine (Thyroxine, T4)
- The thyroid hormones are a bit different.
- This is tyrosine, which is an amino acid. You don’t have to
know these structures, but what you should know is that tyrosine
does have this phenyl ring here which is very hydrophobic – see
the double bonds here, it’s the same as benzene ring, phenyl ring,
you’ll note that that structure is also an ester-diol as well, but it’s
very hydrophobic & this is what tyrosine is & a couple of
tyrosines then come together & they get iodinated so an iodine
gets added to these things, to the phenyl rings, so one reason that
the iodide salt is b/c we don’t get a large amount of iodine in our
diet so they put it in salt so we have sufficient iodine – if the
iodine is not present in nutrition, then there is a lack of functional
hormone here so we do need that iodine & mostly the iodine is
concentrated in our thyroid glands b/c that’s where all the
reaction takes place & then what happens is that this reaction
comes together, this region gets cleaved & it becomes attached to
this other tyrosine molecule & then we have the 1st of 2 hormones
called triiodothyronine or T3 & that has 3 iodines – if there are
four, then it is referred to as tetraiodothyronine & T4.
- These are very typical clinical tests, if you have thyroid issues,
if there’s an issue with your thyroid gland, typically what they’ll
do is they’ll monitor the concentrations of T3 & T4 in your
Unlock document 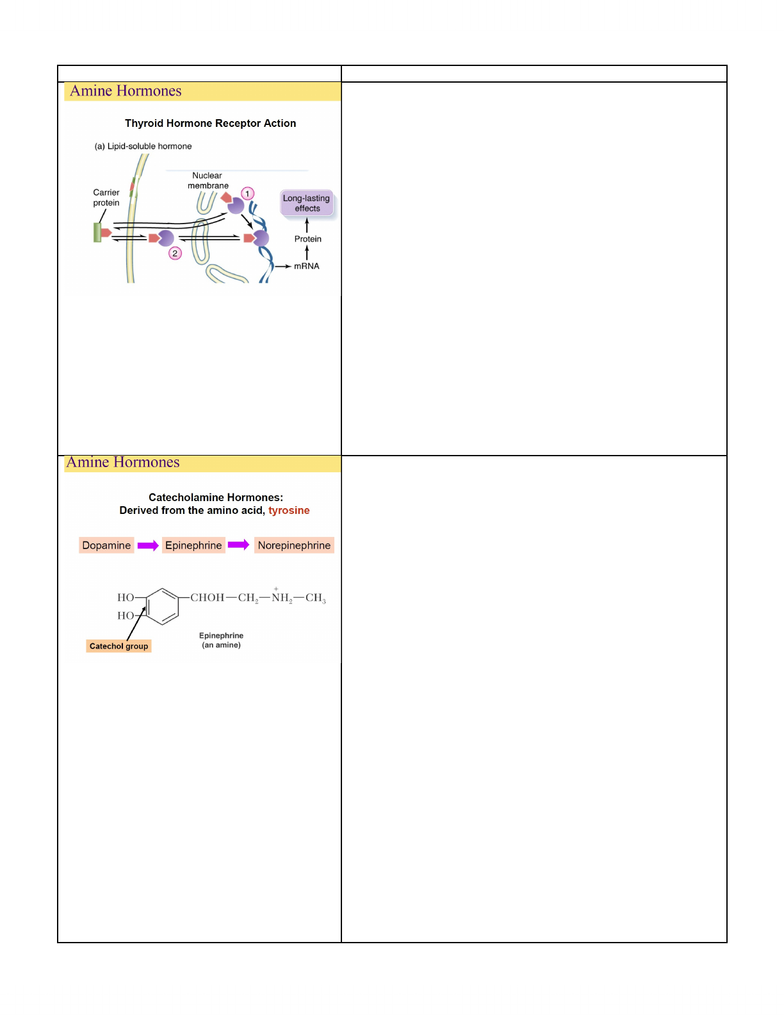 bloodstream, they’re very useful diagnostic parameters for this.
- Thyroid hormones are very hydrophobic – as I mentioned they
kind of act as steroid hormones. In fact, the hormones or the
receptors for thyroid hormones are very similar to the steroid
hormones or steroid receptors & they’re considered part of a
super class, so we think of the thyroid-steroid receptor super class
in that the nuclei receptors are like added transcription factors.
- Unlike the steroids, where we mentioned that some steroids do
have a plasma membrane receptor, these do not very
interestingly, but they’re very hydrophobic, they have a carrier
protein as well, the same way that steroids have a protein,
globulins & such, passes right through the membrane & it can
bind to either a receptor here in the cytosol or a receptor in the
nucleus. If it binds to the cytosol, it gets translocated, then the
complex binds directly to DNA & it acts to turn genes on, genes
off.
- Thyroid hormones play a very major role in development, in
differentiation b/c of its effect directly on the genome, on genes,
but they don’t have the same effects that you might expect with
amines – with amines, it’s a very fast reaction, transient effect.
Thyroid hormones act more like steroids so when we start
looking at how these hormones start to interact, we’ll just touch
on it this year, you’ll see that their reactions, their actions are
much slower & they have more of a modulatory effect.
- So all of these are part of one synthetic pathway. No, I’m not
going to give you that whole pathway. Dopamine at some point
gets converted into epinephrine which then gets converted to
norepinephrine.
- Dopamine is a neural hormone, it’s associated with things like
reward, with locomotion – Parkinson’s disease for example is a
problem where there’s not enough dopamine that’s produced &
so your brain cannot coordinate a number of the locomotor
actions & so we start to shake.
- Epinephrine or adrenaline, this is the stuff that’s associated with
stress & energy production. You’re walking to school one day &
suddenly a lion leaps out from behind a garbage can & you get
that etch in your stomach – that’s adrenaline being released, it’s
epinephrine being released from your adrenal gland, it’s very fast
reaction from your brain there & this is part of the fight or flight
response & this prepares you that you’re about to come across a
major challenge.
- Norepinephrine which is released from terminals in the
peripheral nervous system, but it’s also part of the brain.
Epinephrine, very interestingly, is not in the brain, you can find
dopamine & norepinephrine is used in the brain but not
epinephrine. Norepinephrine is associated with a different stress
so if you’re visiting your uncle’s farm & he says ‘alright, we’ve
got to put in 137 fence posts today’, that work that keeps you
going, that’s what norepinephrine does. This is work related
stress, this is emotional related stress, these hormones & they’re
coming & going all day long.
- They’re called catecholamines b/c they have a catechol group –
a catechol group is this benzene ring here with the 2 hydroxyl
groups so anything with this group usually has the word catechol
Unlock document