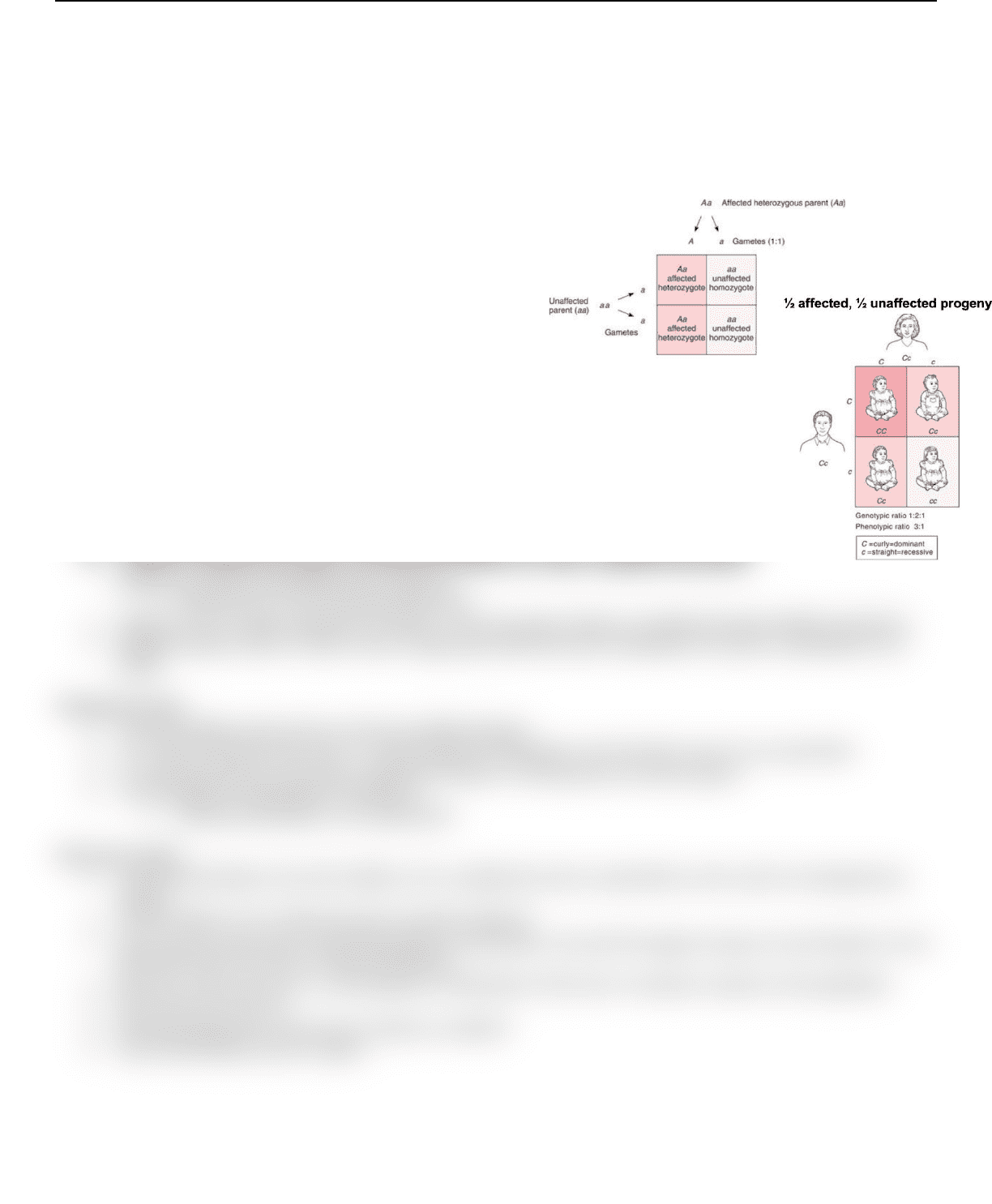 Lecture 4: Mendelian Traits in Humans & Human Pedigree Analysis
Mendelian inheritance and humans: same principles apply
• Albinism: autosomal recessive condition
o Two copies of A produce Tyrosine enzyme → melanin
▪ Aa is also sufficient to produce melanin
▪ aa no tyrosine → albino
Autosomal Inheritance
• Human autosomal traits are located on the non-sex chromosomes (1-22)
• They may be inherited as:
o Autosomal dominant
o Autosomal recessive
• Homozygous dominant and heterozygotes exhibit the
affected phenotype
• Males and females are equally affected and may
transmit the trait
• Affected phenotype does not skip a generation
Autosomal Recessive
• Only homozygous recessive individuals exhibit the affected phenotype
• Males and females are equally affected and may transmit the trait
• May skip generations
• 2 recessive alleles are needed for the phenotype to be expressed
Pedigrees
• Cannot do controlled breeding experiments on humans, use model organisms and human
pedigrees to dissect Mendelian traits of interest
o Humans have a very long generation time
• Pedigrees are an orderly diagram of a family’s relevant genetic features extending through multiple generations
• Pedigrees help us infer it a trait is from a single gene and if the trait is dominant or recessive, autosomal or sex-
linked
Dominant Traits
• Affected children always have at least one affected parent
• As a result, dominant traits show a vertical pattern of inheritance: the trait shows up in every generation
• Two affected parents can produce unaffected children, if both parents are heterozygotes
• Vertical pattern of inheritance in pedigrees
o Affected individual in every generation
Recessive Traits
• Affected individuals can be the children of two unaffected carriers, particularly as the result of consanguineous
matings
• All the children of two affected parents should be affected
• Rare recessive traits show a horizontal pattern of inheritance: the trait first appears among several members of one
generation and is not seen in earlier generations
• Recessive traits may show a vertical pattern of inheritance if the trait is extremely common in the population
• Most traits are recessive
• Dominant deleterious traits do not continue to manifest
• Gene load→lethal recessive alleles
find more resources at oneclass.com
find more resources at oneclass.com
Unlock document

14. Xeroderma pigmentosum is an autosomal recessive genetic disorder. People who are homozygous for the disease-causing allele have skin that is damaged by exposure to ultraviolet radiation; this can lead to skin cancer at an early age. The mutation that causes this disorder is in a gene that functions:

15. The Amish are a religious sect descended from a small group of colonists who came to the United States over 200 years ago. Their religious beliefs have kept them isolated from society. The Amish have a much higher than average incidence of both polydactyly (extra fingers and toes) and dwarfism in their communities. This is most likely explained by:

16. In the structure of DNA that Watson and Crick proposed, the sides of the "ladder" of the DNA molecule are always the same distance apart, making the molecule a constant width. This occurs because when the bases hydrogen bond to form the rungs of the "ladder", a:

17. The RNA transcript of DNA that travels to the cytoplasm, carrying the instructions to make a protein, is called:

19. Mendel's principle of segregation says that:

20. Tay-Sachs disease is lethal before reproductive age, but the allele persists in Louisiana French Canadians because:

21. Physical features that are similar in organisms which are not closely related to each other are most likely a result of ____________. A good example of this is the similarities seen between some marsupial and placental mammals.

22. In humans, which of the following sex chromosome compliments could be found in males?

23. The proteins that are associated with eukaryotic chromosomes:

24. A sequence of DNA nucleotides that contains the information to produce a single protein is a(n):