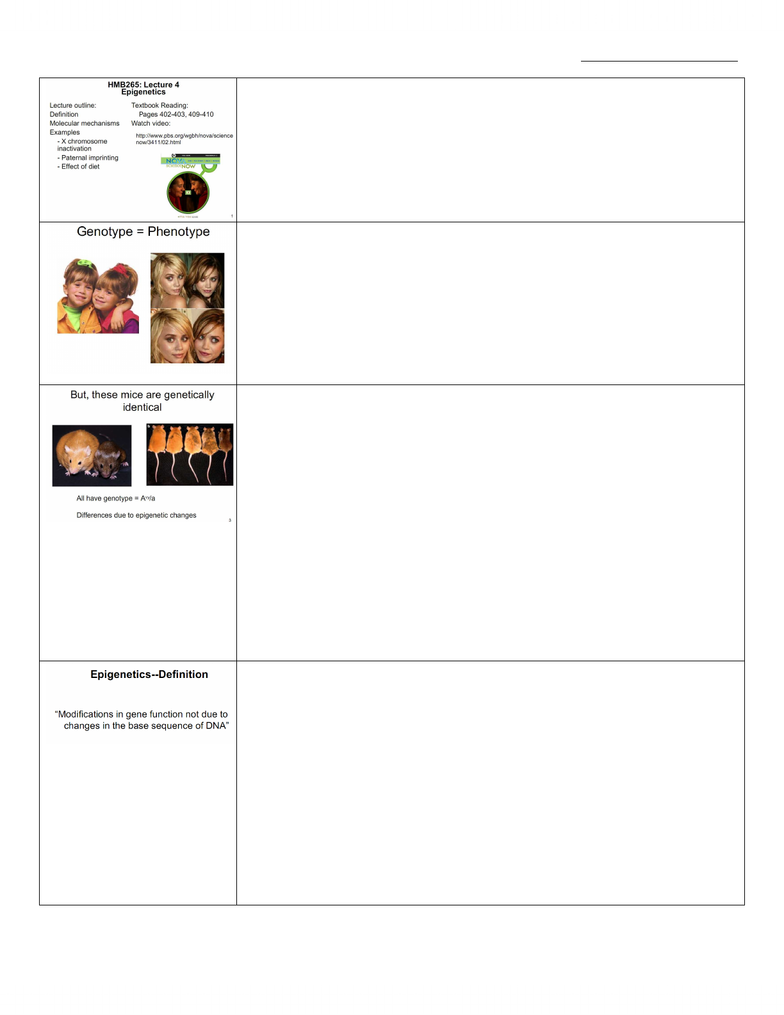 Thursday, January 15, 2009
- The Olsen sisters – they are derived just like all identical twins from an individual
egg that was fertilized and it started to divide and then split – so early, early on it split
and the same genetic material was in both cells, both embryos and both offspring.
- So that is a very good demonstration that our genotype, in other words the genes that
we inherit determines our phenotype because we can see that these individuals just
from appearances look very similar.
- Now that concept of genotype to phenotype is really something we’re going to see
throughout the course & Prof Campbell will go into great detail to show us that
genotype does in fact determine phenotype. But that isn’t the entire story & we shall
see why.
- Here we have two mice, they are genetically identical and yet you see one mouse is
yellow and rather on the hefty side and one is kind of brown coloured. So what could
account for this huge difference in phenotype if it isn’t the genes?
- If you look at the litters from these mice that have been mated – looking at genetically
identical parents can give rise to a litter with variable phenotype like this: going from
the big fat yellow mouse to the skinny brown mouse. These are all brothers or sisters.
This is the same kind of idea, these are the extremes.
- These mice carry a genotype which is designated agouti variable A & then a small a.
This is the 1st time we’ve been shown any genetic notation, what this shows you is that
there are 2 alleles of the same gene, this is called the agouti gene & the 2 alleles are 2
variants of the same gene so it is just a way of annotating that there are 2 variations of
this agouti gene. The slash like that shows the 2 alleles, just the way they notate it.
Usually genes are shown as italicized so you’ll see genes written in italic fonts.
- It turns out that these particular phenotype changes are due to epigenetic changes,
changes that don’t involve the gene per say. It turns out that these mice all have this
genotype and yet they have a variable phenotype. Now to talk what these epigenetic
changes are and how they can influence the phenotype.
- Epigenetics is a concept where there is a modification of the gene function that
doesn’t relate to the DNA sequence so you have the same DNA sequence in both
instances but the gene functions in a different way. Anytime you have that
circumstance that is called an epigenetic effect so modifications in gene function that
are not due to changes in the sequence of the DNA.
- Those mice had the same DNA sequence but their phenotypes were different so in
other words there was a modification of the gene function. Incidentally in those yellow
mice, not only are they obese but they are prone to diabetes as well. It is better to be the
brown mouse than the yellow mouse.
- In that video you’ll actually see the narrator picking up an agouti mouse and he hasn’t
learned how to handle mice properly b/c he holds it by its tail & pokes its abdomen.
When you’re holding a mouse, never let it bite your fingers, hold your hand above its
mouth. Another thing he does is that he puts it on the sleeve of his coat so it will
probably have to go to the dry cleaners. If you ever handle mice, hold them at the base
of the tail & don’t put them on your coat unless you want their pee.
www.notesolution.com
Unlock document

This preview shows pages 1-2 of the document.
Unlock all 7 pages and 3 million more documents. 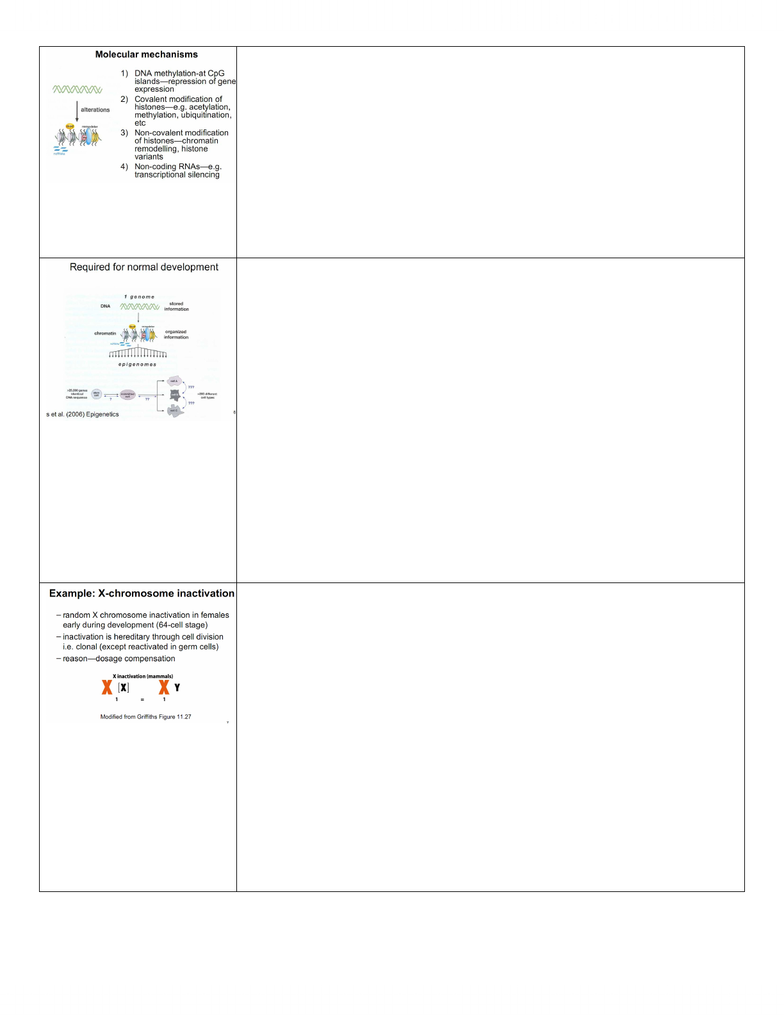 - Epigenetic changes are things like DNA methylation which can induce long term
changes and that was in the CG repeats.
- As well there could be covalent modification of histones shown in the slide. Histones
associate intimately with DNA to form chromatin.
- There is also noncovalent modification of histones like chromatin remodeling and
some histones are actually different sequences so histone variants get inserted into the
chromatin in place of normal histones.
- There is a whole area which is becoming more important – people are realizing that
lots of those noncoding RNAs are involved in making epigenetic changes. Those
noncoding RNAs that people are identifying have a big role to play in making
epigenetic changes.
- Those are different molecular mechanisms involved in making changes that aren’t
related to change in DNA sequence.
- This principle applies to a lot of biological processes. The idea of epigenetics is
important for normal biology and the key thing that she alluded to already is the
concept of having epigenetic changes in cells to allow cells to become different types
of cells during development. The concept would be that in each cell you’d have the
entire genome initially in the fertilized egg, the zygote and as the cell divides, the
chromatin gets remodeled, it gets modified, the histones get changed, the DNA gets
methylated and it gets organized so that in different cell types, there are different
epigenomes. In different cell types, there are different epigenetic changes. Those
epigenetic changes are what cause the different cell types. By turning off certain genes,
you get certain a cell type and not another type of cell.
- In terms of the developmental pathway, the idea would be we have approximately in
our genome have 22,000 genes, this number we settled on and that would be in a cell
with the potential to become any cell, so called stem cell and this cell goes down a
developmental pathway into several cell types, about 200 different cell types in us and
as it does so, it takes on a different epigenome, in other words it has different
epigenetic changes.
- As we learned in tutorials, it is possible to switch the cells back to a more primitive
cell type and so those question marks are beginning to be less of a question mark b/c
people are seeing that it seems to be possible to go back or even you could see the blue
arrows going from one cell type to another.
- Another example we’re probably familiar with but this is part of development is the
idea of X chromosome inactivation. The reason why we have it in us, different
organisms have different strategies but in mammals this is the idea: women inherit 2 X
chromosomes, all their cells have 2 X chromosomes whereas males have one X & a Y.
- There is a concept called gene dosage, where if you have 2 copies of something then
in some instances you get double expression of those genes. We see that in a condition
called down syndrome, which is 3 chromosome 21s. So there is no mutation per say,
just an additional chromosome and yet having additional expression of those genes
found on chromosome 21 can influence a person’s phenotype. Down syndrome people
have heart defects that must be corrected with surgery.
- To circumvent that idea of having, in women, two copies of those genes, what
happens in cells in women is that one X is inactivated and that happens early in
development. It happens randomly at around 64 to 100 cell stage, early, early embryo,
a little ball of cells. Once that X inactivation happens, every single cell that arises from
that cell will be the same. Whichever X was inactivated will remain inactivated. This is
an epigenetic change because what happens is the X becomes highly condensed (the
inactivated one becomes highly condensed) and that one remains highly condensed
even though DNA has to be replicated. The reason for this is what she alluded to and
it's dosage compensation of the genes that are found on the X chromosome.
www.notesolution.com
Unlock document

This preview shows pages 1-2 of the document.
Unlock all 7 pages and 3 million more documents.

So that is a very good demonstration that our genotype, in other words the genes that we inherit determines our phenotype because we can see that these individuals just from appearances look very similar. Now that concept of genotype to phenotype is really something we"re going to see throughout the course & prof campbell will go into great detail to show us that genotype does in fact determine phenotype. But that isn"t the entire story & we shall see why. Here we have two mice, they are genetically identical and yet you see one mouse is yellow and rather on the hefty side and one is kind of brown coloured. This is the same kind of idea, these are the extremes. These mice carry a genotype which is designated agouti variable a & then a small a. The slash like that shows the 2 alleles, just the way they notate it.

What is the role of plasticity in development of the individual? How can two individuals with identical genotypes exhibit different phenotypes?

1. A person is described as a carrier for a particular genetic disease. What does this tell you about their genotype?

2. For any given gene, the principle of independent segregation predicts that each gamete produced as a result of meiosis will contain ____________________

3. A pair of alleles is said to be heterozygous when:

4. In a diploid species, cells can have up to ___ alleles of a particular gene.

5. In a cross between a homozygous dominant parent and a homozygous recessive parent, the number of phenotypic classes observed in the offspring is ______

8. An albino woman has a child with a phenotypically normal man with no family history of albinism (which is a rare recessive disorder). What percentage of their children are likely to be albino?

10. If two heterozygous individuals for a recessive disease (carriers) have a child, what is the chance that their child will develop the disease?

11. In a monohybrid cross between two true-breeding parents that both exhibit the dominant phenotype, ___ percent of the offspring will exhibit the recessive phenotype.

12. In a particular type of tomato plant, red fruit is dominant over yellow fruit, and dwarf height is a recessive trait. If two heterozygous plants were crossed, what proportion of the offspring would show the dominant phenotype?

13. In a cross between a BbRr individual and a BBRR one, what do the following represent: BR, Br, bR, br?

amaranthhare726
Describe the difference between genotype and phenotype. Is it possible for two individuals to have the same phenotype and different genotypes? Explain your answer.
rubycrow929