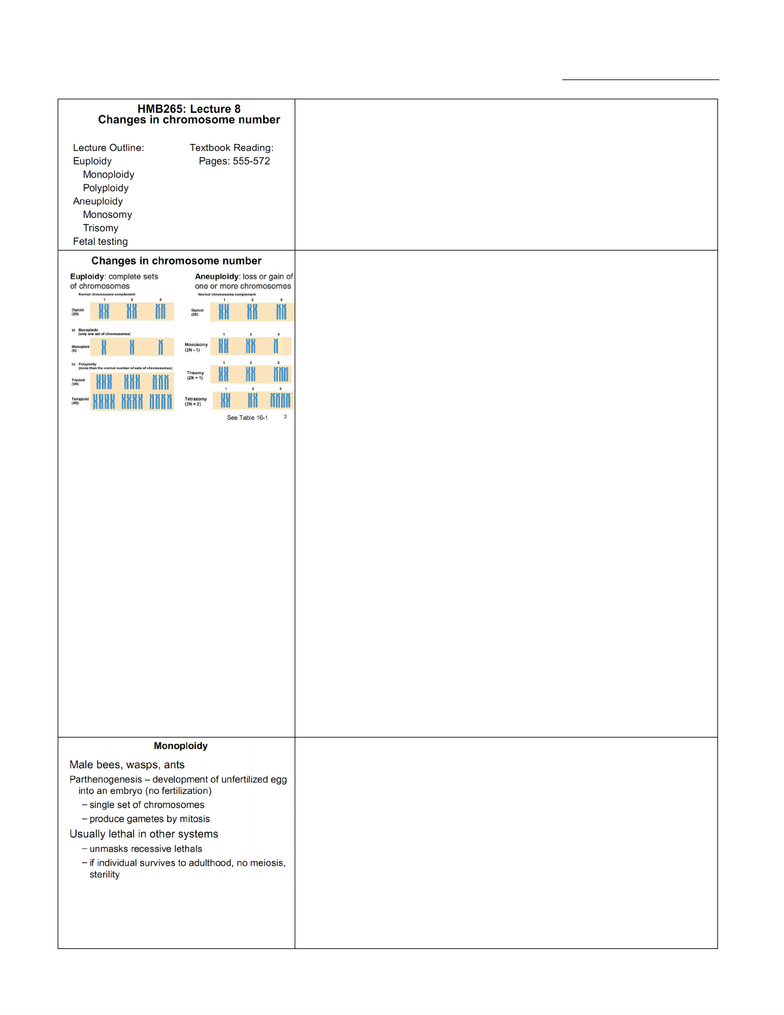 Thursday, January 29, 2009
-Regarding tutorials on Monday, bring your iClickers! It’s going to be a
M/C question and it will test on the plot to make sure you’ve actually
seen the movie. Then, there’ll be a S/A component which will be the
group part that you’ll do.
-Today’s lecture is about changes in chromosome number. In the past
few lectures, the topic of discussion was small mutations. Now, let’s
talk about larger changes in the genome.
-This slide illustrates the different changes in chromosome number you
can have. The left side is showing euploidy and the right side is
aneuploidy.
-Most of our cells are somatic cells which are diploid. The only cells
that aren’t are the gametes which are haploid. So we have in our cells,
two copies of each chromosome. And that’s called diploid.
-There are some particular organisms that have one set of chromosomes
and they’re monoploid. So that would be the normal situation for them.
-As well, you can have alternative amounts or numbers of the
chromosomes and this would be considered polyploidy or aberrant
euploidy. In that case, you have three copies or four copies or five
copies of the same chromosome. In the case of a triploid, they have 3
copies of each chromosome. In the case of a tetraploid, they have 4
copies of each chromosome. So that’s called polyploidy.
-Monoploid is one copy and diploid is two copies.
-In aneuploidy, you have the normal set of chromosomes except in the
case of 1 chromosome you usually either have one too many or one too
few. So the idea here would be this would be the normal chromosome
number (in this case, diploid) and the aneuploidy is called –somy so in
monosomy, the person is missing 1 chromosome. So notice on the right
that we have the usual set of 2 copies for each chromosome but at #3,
one chromosome is missing. So this is called monosomy.
-If you have an additional chromosome, that’s called trisomy. And two
extra chromosomes is called tetrasomy.
-Summary:
-Monosomy: Missing 1 chromosome.
-Trisomy: Having an extra chromosome.
-Tetrasomy: Having 2 extra chromosomes.
-Now, we’re going to learn about the consequences of this and where
they’re found normally and abnormally.
-Some particular organisms (male bees, wasps, ants) are monoploids.
And they arise from parthenogenesis where they develop from an
unfertilized egg into an embryo. There’s no fertilization. They have a
single set of chromosomes and produce their gametes by mitosis so that
they have the appropriate number of chromosomes.
-This is usually lethal in any other organisms. This is b/c if you have
only 1 copy, any gene that’s defective will be observed. So in the slide
where it says “unmasks recessive lethals,” it means that any gene that’s
found in 1 copy if it’s defective, then you’re going to see that effect.
Therefore, any recessive genes that you would normally need 2 of to see
a problem, here you would see a problem b/c you only have 1 copy.
And that’s why it’s usually lethal b/c it shows these recessive traits.
-If the individual survives to adulthood, there’s no meiosis. You should
www.notesolution.com
Unlock document 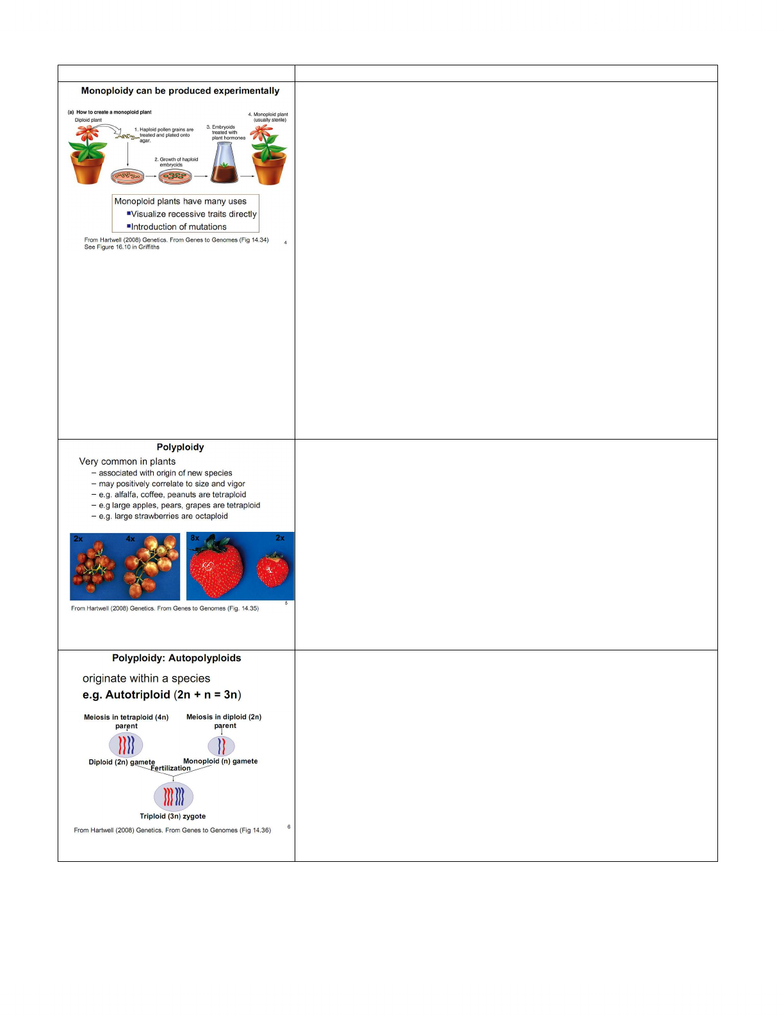 review meiosis so that you’ll recall the details.
-This concept of generating a monoploid organism has been exploited
by plant biologists. Here we see an example of how they create a
monoploid organism and also the potential use of that organism. Here
we’re taking about a plant. You can take pollen grains which are
haploid so normally the plant would be diploid and you can take the
pollen grains (that’s just like taking the gametes of an organism) and
you can grow it in agar. In the right conditions, you can grow these
things to form embryoids. And with the appropriate treatments (with
plant hormones), you can actually create a monoploid plant so it only
has 1 copy of each chromosome.
-This can be very useful b/c you might want to visualize those recessive
traits directly so that you’ll be able to see all the recessive traits. Or, you
might want to introduce mutations in the plants or embryoids looking
for some specific kind of characteristics. For example, resistance to
herbicide. You can then treat all the plants around your plant with
herbicide & your plant would still grow. That kind of thing would allow
you to introduce mutations & then you’d do other special tricks that
would cause the monoploid plant to create a diploid plant again & in
that case, the diploid plant would have both copies of the mutation that
you have selected.
-So you can use the idea of monoploidy to help you select plants with
certain traits.
-It turns out that plants have considerable amounts of polyploidy. This
seems to occur naturally as well as being artificially introduced. It’s
very common in plants and often it’s associated with new species.
Interestingly, the more copies of these chromosomes you have, the
larger the plant is or the larger the fruit is from the plant. So, for ex.,
here are some grapes that are the normal diploid (on the left) and then
we have a tetraploid that has larger grapes. Same deal with the
strawberries. Large strawberries are octaploid while the small guys are
diploid. This is used all the time in agriculture to increase the size of
fruit, etc. And, it’s also used to create new species as we’ll later see.
-How does this come about? How does this idea of having the extra
chromosomes happen? It can happen in different ways which we’ll see
shortly.
-When we see “auto”, it means we’re talking within the same species.
So an autotriploid would be the following:
-There might perhaps be meiosis in a tetraploid plant or some kind of
faulty meiosis in a diploid plant such that you would end up with this
number of chromosomes. So you would end up with a diploid gamete as
opposed to the usually haploid gamete. This can happen spontaneously
in plants or you can cause this to happen with different chemicals.
-Then you would have the normal meiosis in a diploid parent so now
you have a monoploid or haploid gamete – the usual. When fertilization
happens with these two gametes, you’d have a triploid gamete.
-Triploids are not reproductively viable because it’s tricky to have
proper chromosome pairing in meiosis. So typically, triploids are sterile.
-An example of an autotriploids are bananas.
www.notesolution.com
Unlock document 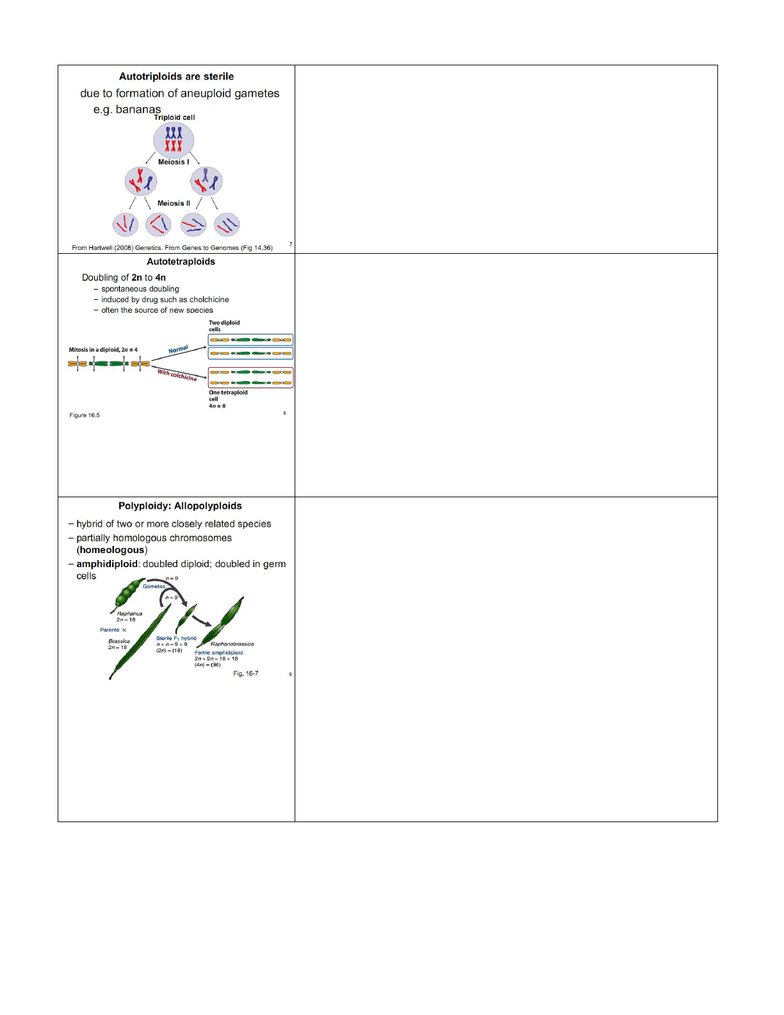 -What would happen in meiosis in an autotriploid?
-In one step of meiosis, the homologous chromosomes line up or pair
up. And, in this case, in meiosis, you can see in the triploid cell that you
have the 1st meiotic division and the 2nd meiotic division and these are
not the same genetically. They will have maybe too much info in terms
of the copies of genes and perhaps they would have too little info as
well. So the mix of chromosomes isn’t correct. And therefore, these
guys do not give rise to any offspring.
-It is possible; however, as well as generating triploids to generate what
are called tetraploids. Specifically, in this case, we can generate
autotetraploids. This happens sometimes naturally but you can also
introduce it by exposing the plants to a drug called colchicine.
-Colchicine disrupts the spindle formation during meiosis. Normally,
spindle fibres form and help to pull apart the chromosomes. If they’re
disrupted, then the chromosomes don’t separate and you end up with a
diploid gamete as opposed to a haploid gamete.
-Here, this shows you what happens in the normal circumstance. This is
in mitosis where you go from a diploid, and you have the normal
diploid number of cells, but if you treat a cell with colchicine, you can
end up with a tetraploid cell.
-Then, you can take that cell and grow it in an appropriate medium. You
would then produce a plant that’s tetraploid. That’s one way that people
go about creating a tetraploid cell.
-With alloautoploidy, you would have mixtures of chromosomes of
species that are similar but not identical. So the ‘allo’ here is referring to
the idea that they come from different species. They have to be
relatively similar but not identical.
-So, for ex., you could get gametes from a radish and a cabbage and
they could form a hybrid shown in the picture. And, if an event happens
where you didn’t have proper mitosis, you could create a fertile
polyploidy which is also called an amphidiploid. So this one could be
created from this in the right conditions so say treatment with
colchicine.
-This kind of experiment was done in the 1920’s, an individual wanted
to create a plant that had the leaves of a cabbage and the roots of a
radish. Unfortunately, it didn’t work very well. He got the roots of a
cabbage and the leaves of a radish. It wasn’t a good deal.
-So this is a hybrid of 2 or more closely related individuals with
partially homologous chromosomes that have some similarities. So it’s
coming from species that are somewhat the same. When they’re
partially homologous, you have homeologous.
-In the 1 example of an allopolyploid, it’s called an amphidiploid and
that’s a doubled diploid. So it’s doubled in the germ cell.
www.notesolution.com
Unlock document

M/c question and it will test on the plot to make sure you"ve actually seen the movie. Then, there"ll be a s/a component which will be the group part that you"ll do. Today"s lecture is about changes in chromosome number. In the past few lectures, the topic of discussion was small mutations. Now, let"s talk about larger changes in the genome. This slide illustrates the different changes in chromosome number you can have. The left side is showing euploidy and the right side is aneuploidy. Most of our cells are somatic cells which are diploid. The only cells that aren"t are the gametes which are haploid. So we have in our cells, two copies of each chromosome. There are some particular organisms that have one set of chromosomes and they"re monoploid. So that would be the normal situation for them.