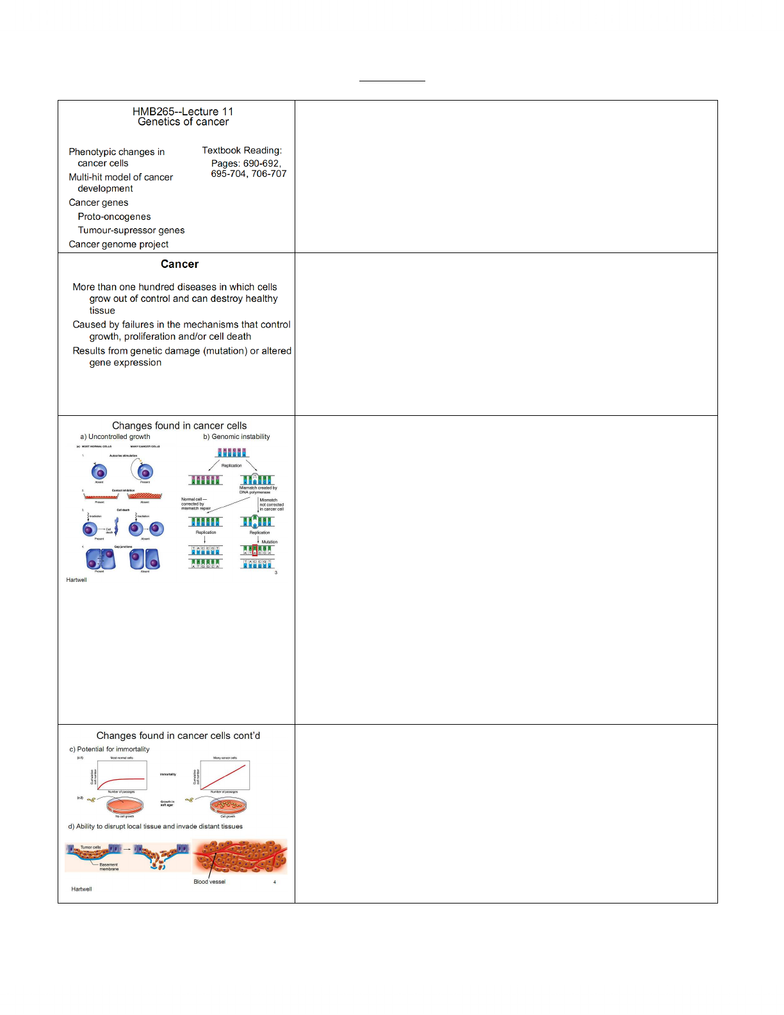 Lecture 11
-To get a sense of the questions that are going to be on the midterm,
go on the library website and access the past exams. The past exams
are most representative of the questions that will be on the
upcoming test.
-The genetics of cancers ties together the topics of mutations that we’ve
been talking about for a while.
-There are over one hundred types of cancers in which cells can grow
out of control & destroy healthy tissue. The kinds of things that can
happen are there is a failure to regulate growth, proliferation, and/or cell
death. Cell death is when cells die. Usually, they’ll die if they’ve been
injured in some fashion.
-The overall cause of cancer, from a biological point of view, is
mutations in genes. These mutations can result in some instances in
altered gene expression.
-These are some of the characteristics of a cancer cell.
-Most normal cells will, when you put them in a culture dish, will
divide until they reach the edge of the dish and the dish is completely
full of cells but the cells do not have the ability to grow over one
another. So a normal cell would have this characteristic called contact
inhibition. When the cells are contacting other cells, they stop growing.
That’s absent in cancerous cells where they continue to proliferate even
when they’re touching other cells.
-When you damage normal cells, so say you damage DNA by
irradiating it, it will usually die via cell death. In some instances, the
cancer cells are resistant to radiation – they remain alive even in the
presence of radiation. This isn’t the case for all cancer cells since
radiation is used to treat certain forms of cancer.
-As well, there’s genomic instability. If you look at the karyotype (a
picture of the chromosomes) of a cancerous tumour, you’ll often see
huge changes in the chromosome number, translocations, etc. Part of
the reason is that throughout the cancer process, there’s a defect in
repair. So that can also be part of a cancer process where you end up w/
even more mutations than previously.
-Some cancers are immortal in the sense that in normal cells, you can
grow cells for a certain period of time and then they die whereas certain
cancer cells can continue to grow for many years.
-There are cells used in labs called HeLa cells which came from a
woman w/ cervical cancer in the 40s or 50s and her cells are still being
cultured today in labs. So these cells have become immortal.
-Tumour cells have the ability to break through tissues and basement
membranes and move to other locations. This process is called
metastasizing which is the ability to move to a new place. So they can
go and disrupt local tissues, move through the blood, and move into
different locations. This is only characteristic of some cancers.
www.notesolution.com
Unlock document 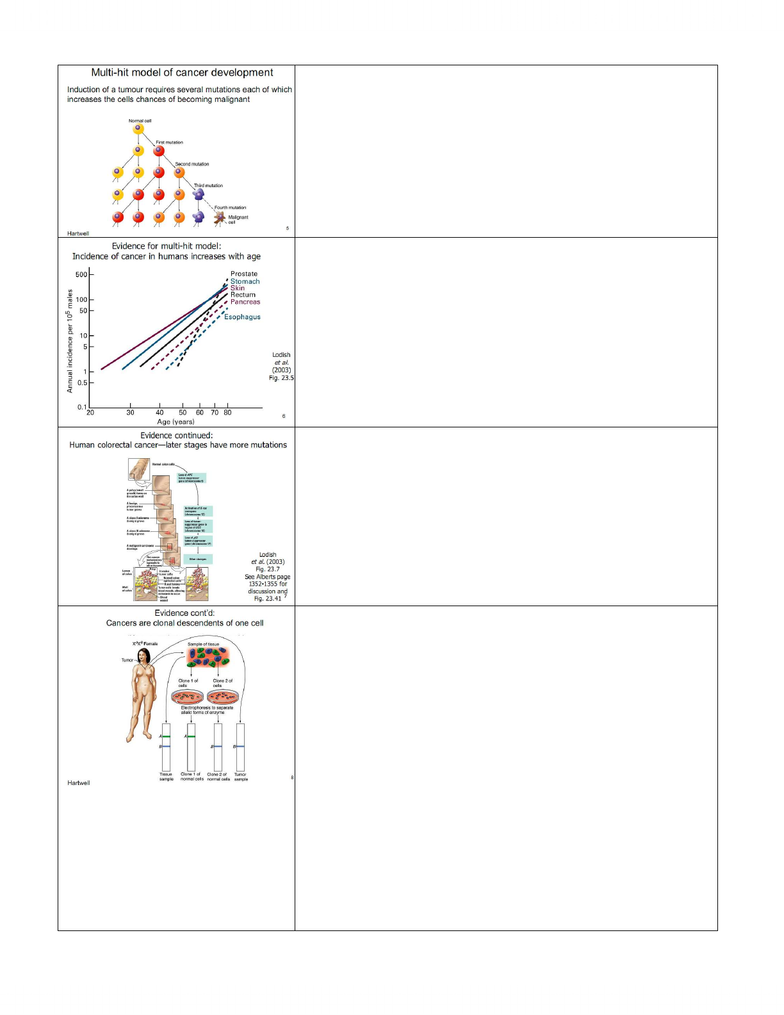 -This is a model of how cancer developed.
-The idea is that there are several mutations that have to happen in
different genes before a cell becomes cancerous. For example, so there
has to be a 1st mutation in a gene, a 2nd mutation in a different gene, a 3rd
mutation, and finally, by the time you get a 4th mutation, you have a
malignant cell.
-As you get older, your chance of developing cancer increases. So
presumably, some of the cells in your body have lived longer and have
been exposed to different incidents for a longer period of time and had
the chance to build up mutations.
-The incidence of cancer in males increases with age.
-Over a lifetime, a cell will develop more mutations b/c there’s been
more chance/time to develop mutations.
-As well it’s possible to isolate cancer at different stages of the
development of cancers. So you’ve probably heard of the idea that a
tumour being benign & then getting more and more cancerous & then
eventually becoming malignant and having the ability to metastasize.
-So scientists actually took out little growths that represent early stages
of cancer and later stages of cancer for a variety of body parts and they
discovered that the number of mutations in the small polyps (small
growths) is small in comparison to the number of mutations in the genes
that you see in a more malignant cell.
-This reinforces the evidence for the multi-hit model of cancer
development.
-There’s also a concept that it only takes a single cell to have these
several mutations for the cancer to develop.
-Best evidence for this idea comes from females where you take out a
tumour from a female. All areas whether it’s a tumour or another part of
the body that’s normal, if you look at those cells, remember that they
will have a random X inactivation. So in a patch of normal tissue, you
would expect to see cells that have 1 X inactivated and other cells the
other X inactivated.
-That’s what you would observe in a tissue sample if you had a way to
distinguish b/w the 2 X chromosomes to see which one was active say
by looking at specific types of enzymes that’s coded by the X
chromosome then you’d see 2 differences representing the paternal or
maternal enzyme form.
-In the case of tumour cells however, you would only get the 1 form of
the enzyme which represents the fact that in each of the cells of the
tumour, the same X is inactivated. This suggests that a single cell w/ a
certain X that was inactivated gave rise to the entire tumour. And that
single cell acquired several mutations as it became a tumour.
-This is called a clonal expansion of 1 cell during the development of
cancer.
www.notesolution.com
Unlock document 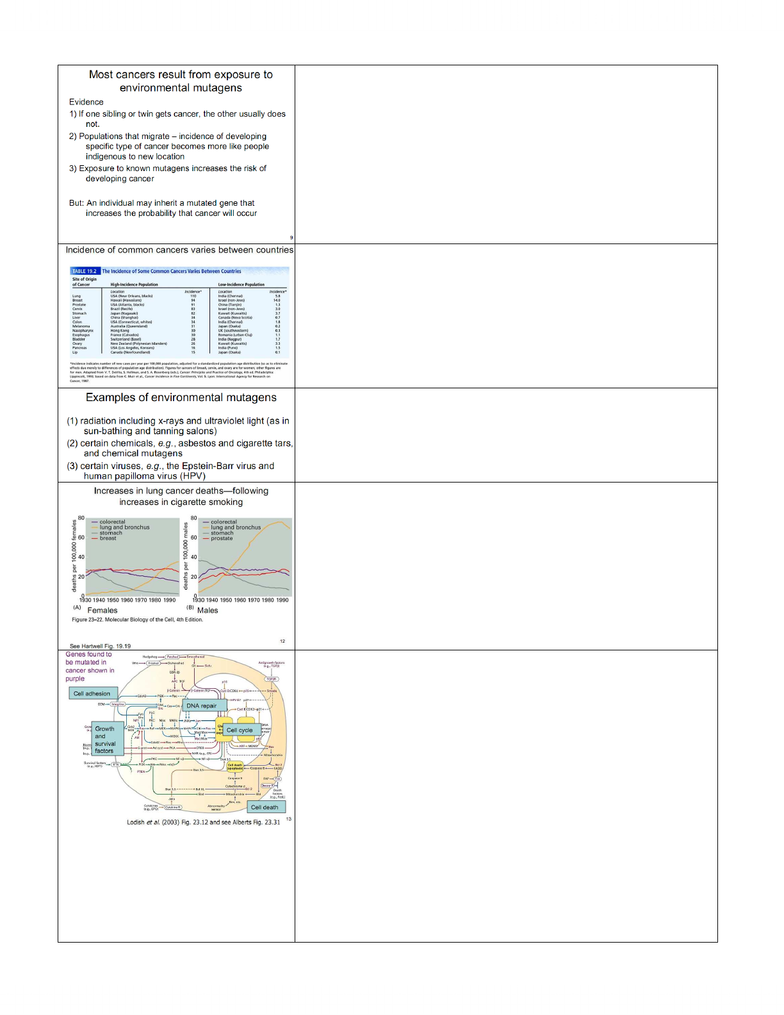 -Environmental effects that are known to cause cancers are called
environmental mutagens. They include UV light, X-rays, chemicals,
and others that are known to cause damage to the DNA resulting in
mutations which leads to cancer.
-There’s a combination of environment plus genes that influence cancer
development.
-As well, you might be extremely unlucky & inherit a gene that will
make you more susceptible to cancer development. There is a
component of development of cancer that’s inherited & in that instance,
you’re inheriting a mutated version of the gene that will make you more
susceptible.
-In different populations and in different countries, you have different
incidences of common cancers. This would be partly genetics as well as
partly environment that influences the type of cancer that individuals
develop.
-Don’t need to memorize this, just known the main idea.
-Asbestos and cigarette tars are linked to lung cancer.
-HPV causes cervical cancer and it is now something that can be
vaccinated against to reduce the risk of developing cervical cancer.
-Certain types of behaviour (e.g, smoking) increases the likelihood of
developing cancer.
-Females tend to lag behind the males b/c females didn’t take up
smoking as quickly as males took up smoking in those times.
-There’s also an increase in incidence of lung cancer even amongst
those who don’t smoke.
-What are the genes that are responsible for the development of cancer?
-Here we see a huge map of cellular processes and signaling pathways
and any place where you see purple lettering, all of these are known to
cause cancer when they’re mutated.
-Don’t need to know this on the test.
-Receptor Tyrosine Kinase pathway has a Ras protein involved that
binds to GTP and it’s known that mutations in Ras cause cancer.
-If you look at this in terms of areas, it’s known that genes involved in
growth and survival factors, when they’re mutated, they can cause
cancer which makes sense.
-As well, proteins involved in cell adhesion can cause cancer if they’re
mutated b/c cells have to adhere to one another and if they lose this
ability, they can migrate to different places and cause metastasis.
-DNA repair is obviously important. If there’s mutations in DNA repair,
then the cell won’t be able to repair DNA and therefore there are going
to be even more mutations.
-Cell cycle (process of cell division, replication of DNA, and separation
of cells which is self proliferation) and processes involved in cell death
www.notesolution.com
Unlock document

To get a sense of the questions that are going to be on the midterm, go on the library website and access the past exams. The past exams are most representative of the questions that will be on the upcoming test. The genetics of cancers ties together the topics of mutations that we"ve been talking about for a while. There are over one hundred types of cancers in which cells can grow out of control & destroy healthy tissue. The kinds of things that can happen are there is a failure to regulate growth, proliferation, and/or cell death. Usually, they"ll die if they"ve been injured in some fashion. The overall cause of cancer, from a biological point of view, is mutations in genes. These mutations can result in some instances in altered gene expression. These are some of the characteristics of a cancer cell. So a normal cell would have this characteristic called contact inhibition.

. We observed that cancer is the combination of variousmutations in individuals and that two people with the same cancertype can have very different mutations which cause it to occur.Which statement(s) below are TRUE?

A. Cancer is caused by multiple âhitsâ or mutations.

B. All cancers are caused by a mutation in TP53.

C. Cancer can be caused by multiple mutations in processesregulating mitosis.

D. Cancers can be caused by chromosomal changes (deletions,insertions, viruses) as well as small point mutations.

E. Cancer is the leading cause of death in the UnitedStates.

F. Exposure to mutation-inducing chemicals (mutagens) increasesthe number of âhitsâ a person might have and thus increase theirrisk of cancer.

G. Cancer can be caused by multiple mutations in processesregulating cellular differentiation (growth and maturity).

I. Cancer can be caused by mutations that increase cell deathpathways.

J. Cancer can be caused by mutations that decrease cell deathpathways. K. Checks and balances in multiple pathways ensure thatone mutation does not cause cancer to develop in humans.

Indicate whether each of the following descriptions better applies to proto-oncogenes (P) or tumor suppressor genes (T). Your answer would be a five-letter string composed of letters P and T only, e.g. PPPTT.

Cancer mutations in these genes are responsible for most hereditary cancers.

Cancer can result from translocations that place these genes under the control of wildly active promoters.

Cancer mutations in these genes are usually recessive.

Cancer mutations in these genes include gene duplications.

The Hela S3 cancer cell line is considered to be "continuous" due to acquired mutations that enable the cells to evade senescence. Describe the characteristics of HeLa cells and discuss any mutations that would make them grow continuously.
greyox221