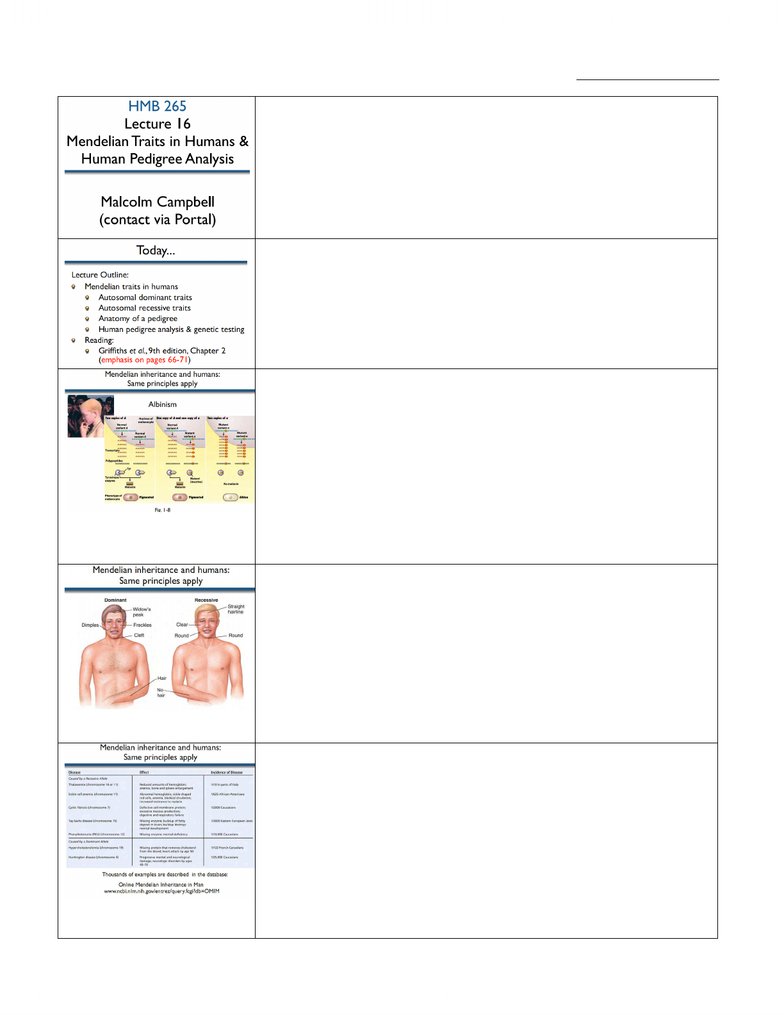 Thursday, March 5, 2009
- “Not Just Peas in a Pod”.
- First we see a picture we saw in the beginning of term, we can see that traits
are inherited from one generation to the next and a great example was with
Steven & Liv Tyler. The smile seems to be inherited, hair pattern as well so the
bottom line is we know that traits are inherited in humans.
- Are they exhibiting the same mode or patterns of inheritance as Mendel
observed in his peas? Of course they are, they are derived from mutations in
the same way that the mutations that gave rise to the variants in Mendel’s peas
were found.
- So he provided but one example in the slide, it looks exactly like what we
looked at on Tuesday and that is that we have for example, a dominant allele
here in African black populations where what we find is that the dominant
allele gives rise to a functional tyrosinase enzyme which converts tyrosine to
melanin giving rise to the characteristic brown pigment so individuals that are
heterozygous for functional tyrosinase allele and a recessive tyrosinase allele
are still going to show that same melanin pigment whereas individuals that are
homozygous for a loss of function allele of that tyrosinase are going to be
unable to make that melanin pigment and we will see incidents of albinism or
albinos in the population.
- So it is very similar to what we were looking at with regards to production of
flower pigment and here just pigments in humans.
- The same sort of molecular mechanisms underpin what we see in terms of
traits is the pattern of inheritance. We can find dominant & recessive traits in
humans.
- So here we have some. So dimples vs. round so dominant vs. the recessive
trait. The widow’s peak in males vs. the straight hairline is dominant vs.
recessive. Freckles versus clear face, again freckles are dominant. Hair on the
arms vs. no hair again dominant vs. recessive & we can see this then within
families of individuals that they have mixtures of the dominant & recessive
traits.
- We can find this not only for visible traits but those that emerge in
populations that are related to disease susceptibility.
- He has provided a short shopping list of different diseases shown either in
this instance right here recessive modes of inheritance vs. a dominant mode of
inheritance.
- He will come back to 2 of these so he’ll come back to hypercholesterolemia
and Huntington’s Disease later in the term and probably also back to cystic
fibrosis. We’ll see other examples of disease susceptibility loci showing again
either dominant or recessive modes of inheritance. We’ll see some today in the
pedigrees that we’re going to look at.
- If we’re interested in the occurrence of some of these, again we can see they
occur with varying degrees of frequency and we can consider why those
frequencies are established in populations in his very last lecture.
- If we’re interested in more of these traits, thousands can be found on the
www.notesolution.com
Unlock document 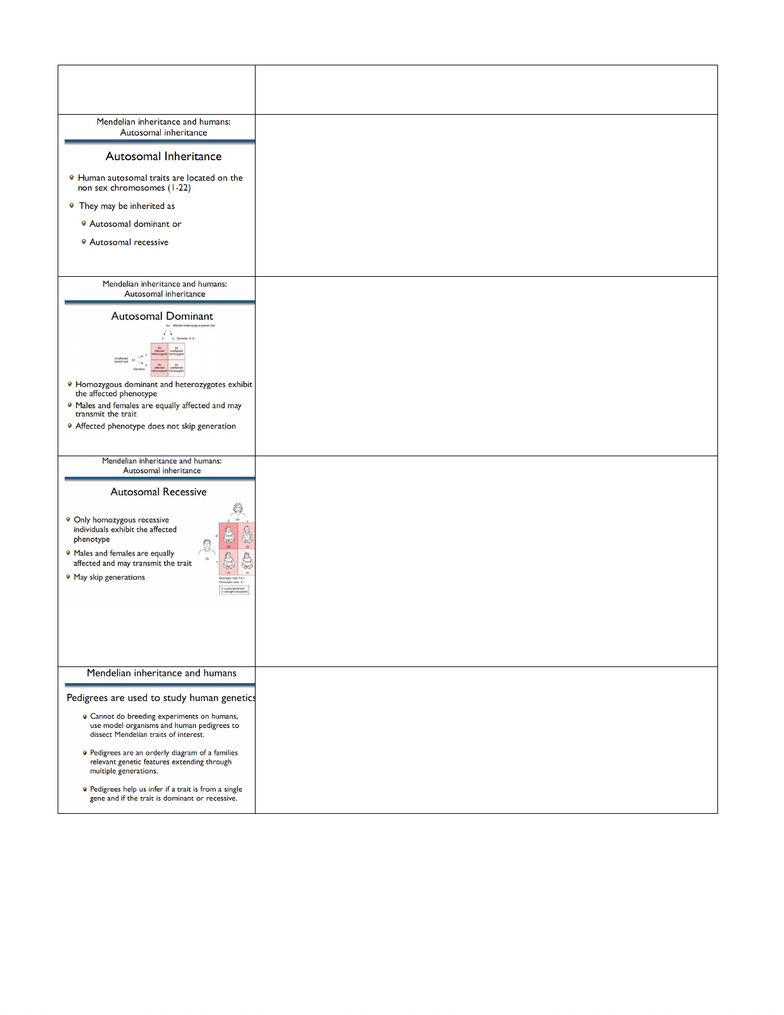 website online for Mendelian inheritance in men which is a shopping list of all
diseases found so far displaying simple Mendelian modes of inheritance,
dominance versus recessive.
- All of the traits described to us so far are what are known as autosomal traits
– they show so-called autosomal inheritance. What does that mean? Human
autosomal traits are located on the non-sex chromosomes so chromosomes 1
through 22, not on the X and the Y. They may be inherited as either what are
known as autosomal dominant or autosomal recessive traits and that is what he
will focus on for the remainder of today’s lecture: those traits and how they’re
inherited in pedigrees.
- Autosomal dominant traits show a pattern of inheritance that we’ve seen
already in peas. What we see there is that homozygous dominant &
heterozygotes exhibit the affected phenotype & males & females are equally
affected & they transmit the trait.
- So we see that in a stereotypical Punnett square here which is a cross b/w a
homozygote & heterozygote & so we end up with the typical 1:1 segregation
ratio of affected individuals vs. unaffected individuals, so individuals showing
the traits vs. those not showing the trait.
- What is important about these sort of traits and it will become more apparent
why this is more important as we analyze pedigrees is that the affected
phenotype does not skip generations.
- Autosomal recessive traits by contrast of course are only apparent when the
individual is homozygous recessive so only homozygous recessive individuals
exhibit the affected phenotype.
- Here for example, the example he provided is that males & females are
equally affected & may transfer the trait as is the case with autosomal traits.
Here we have 2 heterozygotes for curly hair which is the dominant trait & with
their 4 progeny, there is a ! chance that those progeny are going to also have
curly hair & a " chance that their offspring will exhibit straight hair, the
recessive trait.
- Now what is important with regards to this kind of trait and again in terms of
interpreting pedigrees is that this kind of trait may skip a generation, that is you
will not see the recessive trait in a given generation and then it will appear in
the next generation.
- So he has alluded to the fact that the way in which we track this of course is
by looking at pedigrees so it is pedigrees that are used to study human genetics,
to track traits from generation to generation.
- Reasons for that are pretty simple: it is considered morally reprehensible to
do breeding experiment with humans. What we have to use then to dissect
traits in humans is a combination of pedigree analysis & of model organisms to
better understand those traits and their inheritance so pedigrees then are orderly
diagrams of families.
- Note there is a typo in the handout, should be family’s.
www.notesolution.com
Unlock document 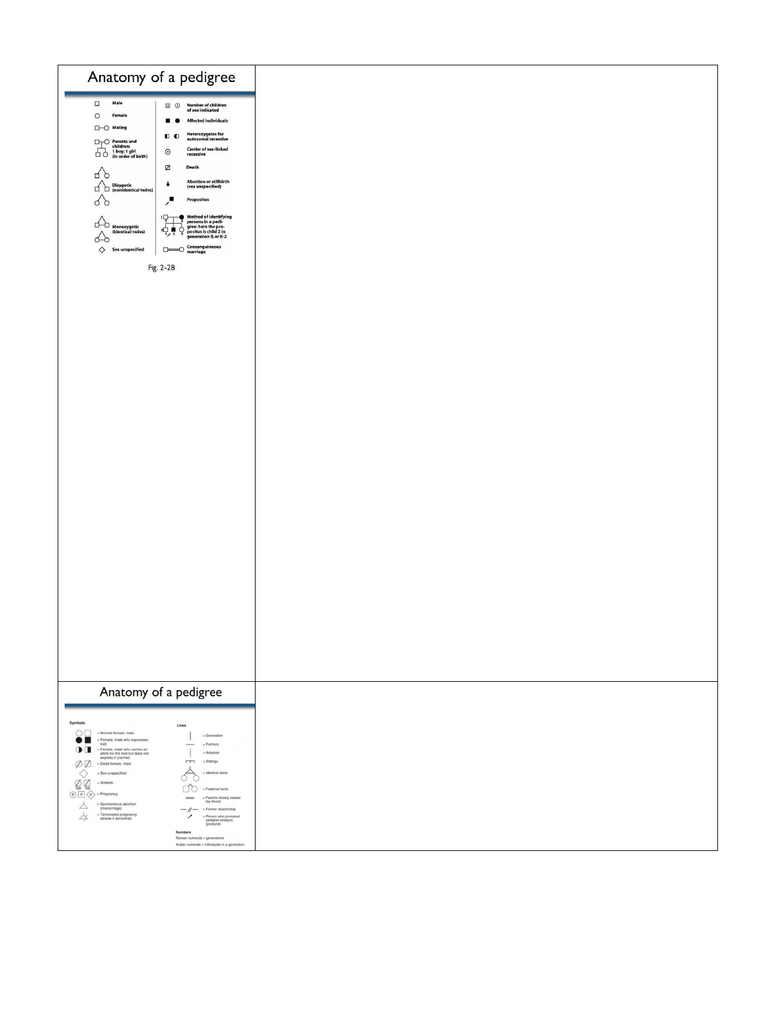 - What he means by the anatomy of a pedigree is what does it look like, what
are the features of that particular pedigree and let’s take a look at some of the
features that we should think to encounter in a pedigree and we’ll see male,
female individuals that are going to be involved in mating and giving rise to
progeny. This is in the slide so males are squares and females are round, etc.
- Progeny is shown in order of birth, the earliest born to the most recent born
going left to right.
- Going over to the other side then is the number of children of a given sex
which can be indicated in abbreviated forms of pedigrees.
- We have affected individuals (displaying trait) displayed with a filled either
square or circle and heterozygous individuals for autosomal recessive traits are
shown by the half filled square or circle.
- Every now and then within a pedigree we’ll find dizygotic (fraternal twins)
and every now and again we’ll find monozygotic twins shown in a similar
manner but a link between the two of them to show NOT THAT THEY
MATED but that they’re identical twins.
- So for sex unspecified again b/c historically it wasn’t known. For example
that the individual was predeceased & one didn’t know what sex the individual
was & speaking of which of course death is going to be a feature of some of
these as well so death is a square or a circle with a line through it & every now
& then you will have either a chosen or spontaneous abortion or stillbirth &
generally sex is unspecified in this particular instance.
- This individual is sometimes also called the pro-band, that is the propositous
or the person proposing to have the pedigree done, the person who is wanting
to find out about their genetic heritage generally.
- Then finally, we have a method of identifying persons within a pedigree so
instead of referring to them by name, give them numbers and we have the
propositous with the arrow as individual number 2 in this particular pedigree.
- Normally for the examples we’ll be provided with, this is exactly how the
pedigree would be shown with these #s to talk about generation I, individual 1,
generation II, individual 3 for example is what they will ask us about.
- Here is a special case here, this is inbreeding so for those of us that know our
Latin languages, con sanguineous is with blood so it is mating with a blood
relative & that is shown by a double line & he will come back to that in a
couple of slides.
- Here is an important one we won’t deal with today and that is carrier of a sex-
linked recessive trait so these are traits that are carried not on autosomal
chromosomes but on sex chromosomes.
- Sometimes the pedigrees look slightly different and he is just giving us a
heads up on this regard, we are pretty well tied in to using pedigrees available
from literature and sometimes they look slightly different so he wanted to just
give us a heads up. Sometimes we’ll see these designators for some of the
things that he has talked about in the previous slide, he won’t go over them
right now.
- Adoption indicated by a dotted line so nonrelated individuals. Identical twins
indicated by a slightly different mechanism in this example here.
- In this instance it is called the proband but it is the same as the propositous.
www.notesolution.com
Unlock document

First we see a picture we saw in the beginning of term, we can see that traits are inherited from one generation to the next and a great example was with. The smile seems to be inherited, hair pattern as well so the bottom line is we know that traits are inherited in humans. Of course they are, they are derived from mutations in the same way that the mutations that gave rise to the variants in mendel"s peas were found. So it is very similar to what we were looking at with regards to production of flower pigment and here just pigments in humans. The same sort of molecular mechanisms underpin what we see in terms of traits is the pattern of inheritance. We can find dominant & recessive traits in humans. So dimples vs. round so dominant vs. the recessive trait. The widow"s peak in males vs. the straight hairline is dominant vs. recessive.