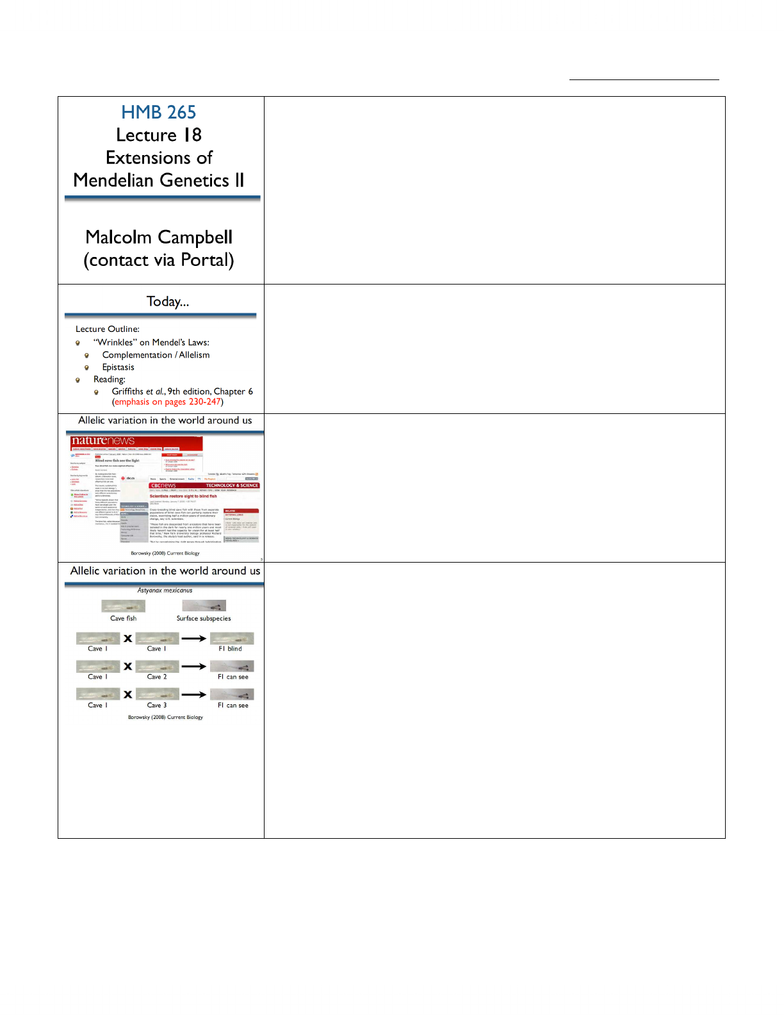 Thursday, March 12, 2009
- Let’s take stock. Here is where we started this term: Mendel’s simple traits,
the antagonistic pairs – we saw it was a useful way to explain simple patterns
of inheritance. What we saw in last lecture is that this is inadequate in
explaining variation we find in the world around us. The variation in the world
around us is more complex and therefore, means that somehow we have to
alter our understanding, make wrinkles in Mendel’s laws so it better
accommodates the natural variation that is obvious in terms of allelic diversity
and patterns of inheritance we see in the world around us and we touched on
those in the last lecture.
- This is where we’re at today, continuing with the concept that there are
wrinkles in Mendel’s laws to help the variation in genetics in the world we see
around us.
- We hear about allelic variation in the world around us all the time.
- This is a story in Nature News and CBC news and published in Current
Biology last year in 2008. It is an interesting story about blind cave fish and
how it is they do or do not perceive light in their environment.
- The fish in question is an Astyanax mexicanus. As the name implies it is a
blind cave fish from Mexico. It turns out there are many caves throughout the
Mexican desert where the blind cave fish reside.
- Scientists working on these blind cave fish decided to do an interesting
experiment. What they did was to take fish they found from these cave as well
as sub-species they found on the surface and they did what all organisms like
to do: they made them have sex and produce offspring.
- So what did they find when they did this? First he wants us to note that the
blind fish in the slides have no pigment in its eyes whatsoever and in the fry
from the surface subspecies, you can find perfect eyes, those nice black eyes.
They took fish from cave one and crossed fish from cave one with them and
what they found was that all of the offspring F1 were blind. By contrast, if they
took cave 1 and crossed them with fish from cave 2 so different locations in
the desert, what they found were that the F1 could see.
- This suggests something to us since they were able to show time and time
again with a number of cave comparisons so there is his final one in the slide,
that is, cave 1 with cave 3 fish, both blind, the offspring however can see.
www.notesolution.com
Unlock document 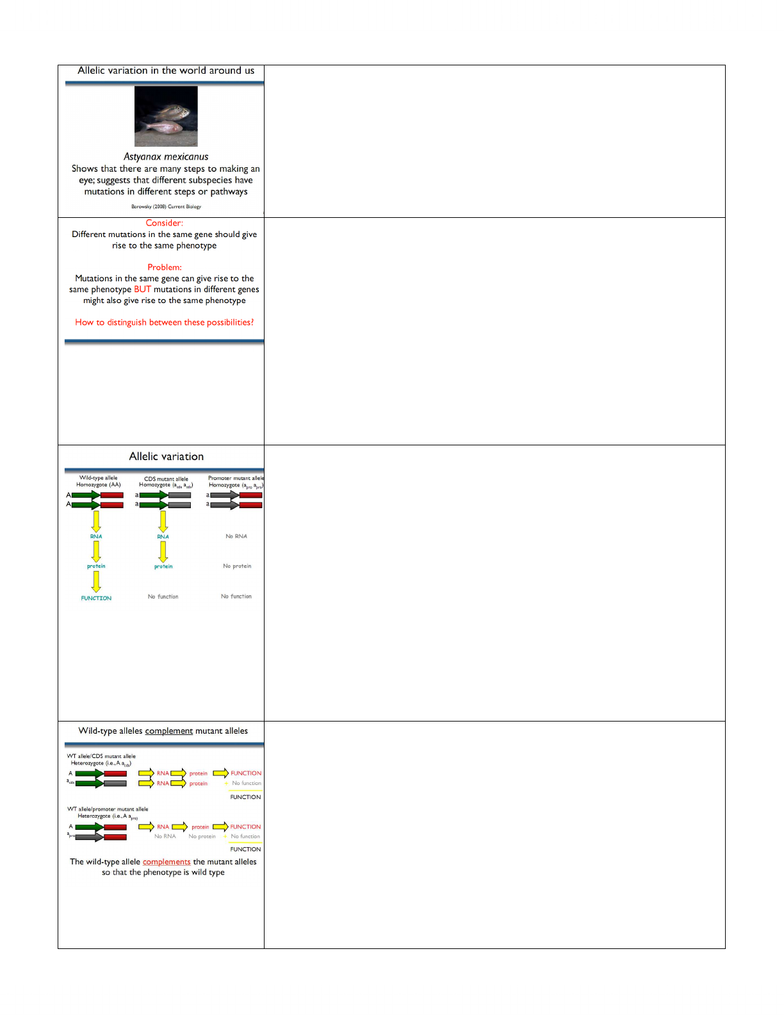 - What this points out to us, what these experiments suggest to us is that there
are many ways to make a functional eye. It suggests that different subspecies
have different mutations in different steps in the pathway to making an eye.
- Over the course of the lecture he wants to take a look at how we figure out
which genes control which steps in the pathway.
- Here is a question he asked last lecture. Consider that different mutations in
the same gene should give rise to the same phenotype. That is like crossing
cave 1 fish with another cave 1 fish. Both were blind and should give rise to
blind fish which they did.
- But we know that mutations in the same gene while they can give rise to the
same phenotype, but mutations in different genes might also give rise to the
same phenotype.
- If there are multiple steps on the way to making an eye, then if he mutates
one step, he loses the ability to make an eye but similarly if you create a
mutation in another step, you lose the ability to make an eye so how do we
distinguish between these two possibilities, that is, one gene responsible for the
trait versus multiple genes responsible for the trait? Now we’re on the road to
starting to think about the roles that multiple genes acting together plays in
giving rise to the variation in the world we see around us.
- So let’s consider this by talking about it at the level we already understand,
the molecular level. Let’s look at allelic variation at the molecular level.
- We saw this slide before, where we start with wild type allele, homozygotes
the AA alleles and we have in the diploid state then, a promoter upstream of
the coding sequence to drive expression of a particular gene product: a protein
that will give rise to a function.
- Now imagine he has a mutation that occurs in the coding sequence, the CDS
(coding sequence allele) and he indicated it by acds. Imagine a homozygote for
acds, this individual has a nice functional promoter but the coding sequence no
longer gives rise to a functional protein symbolized by the grey. We end up
with protein that doesn’t work.
- The final example we have to consider in allelic diversity is this: Imagine that
we have a mutation in the promoter in the allele and he has indicated that with
apro. Here we have a non-functional promoter and a functional coding sequence
but that doesn’t matter since there will be no expression and therefore no
function. Here he is considering one locus that is one gene on the molecular
level and the effect it will have on the appearance of a particular trait.
- So this is the important concept he wanted to get across, and that is wild type
alleles complement mutant alleles. What does he mean by that? Let’s look at
that simple schematic. On the previous page effectively was the indicator of
what it is or a legend for this particular slide.
- So imagine you have a big A and then a small acds heterozygote. Here what he
has is one functional allele and one allele that gives rise to a non-functional
protein. The net result of this is going to be function. This is because he has at
least one functional allele. So we say that the wild type allele, that big A allele
has complementing the small a loss of function allele, it complementing a
deficiency on account of that small a allele.
- The same is true for the other mutant allele. That the big A allele should
similarly complement the deficiency of the small a allele even though it is a
mutation in the promoter & that is exactly the case here. Again we have a
function with the wild type allele & no function with the recessive loss of
www.notesolution.com
Unlock document 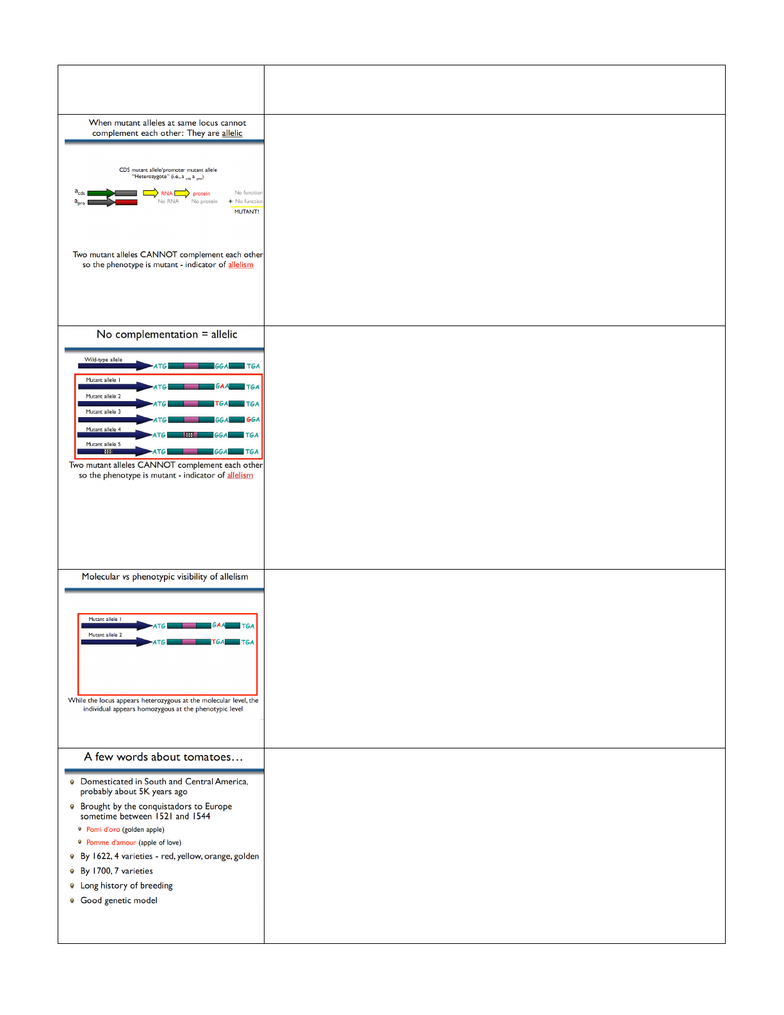 function allele b/c it is complemented by the wild type allele. The wild type
allele complements the mutant allele & the phenotype expressed is wild type, it
is complementing the deficiency.
- Here is an important point. When mutant alleles are in the homozygous state,
they cannot complement each other. What does he mean by that? They’re said
to be allelic.
- Imagine that the coding sequence mutant allele & the promoter mutant allele
together in what would be a molecular heterozygote. This means they differ in
terms of their molecular structure so they look heterozygous. What we’re
going to see is that as far as the trait is concerned, they look homozygous b/c
what we end up with in the top allele is a non-functional protein & the bottom
allele is no protein at all so no function. Together, there is no function, there is
still going to be whatever the mutant is & what we’re seeing here again is that
the 2 mutant alleles cannot complement each other so the phenotype is mutant
& this is an indicator of what is known as allelism, that is the small acds allele is
allelic & allelism would be with apro allele.
- Here we have a bunch of different examples of different allelisms that would
not complement each other as shown in the square box in the slide.
- Mutant alleles 1 through 5, you can see that those mutant alleles give rise to
altered or non-functional protein can either reside in the coding sequence as we
see there at the top 2 alleles, could be giving rise to an altered stop codon as is
the case with the second or third allele, could give rise to a loss of an intron,
could also account for that. The loss of an intron could result in a mis-spliced
protein for example or a mis-spliced mRNA giving rise to a dysfunctional
protein. Then finally we will find just like the example we already seen before,
the mutation is occurring in the promoter region.
- All of these alleles in combination with each other in a diploid organism
would not complement, they do not give rise to function, you see the mutation
& therefore you would know that they are allelic. So the mutant alleles do not
complement each other so the phenotype is mutant & this is an indicator of
allelism.
- Here is an important point, while the locus may appear heterozygous at the
molecular level and he touched upon this, the individual would appear
homozygous at the phenotypic level.
- For example, let us consider a heterozygote of those 2 alleles right here &
they were both dysfunctional or mutant alleles, alleles 1 & allele 2 while they
look heterozygous at the molecular level, they would appear as homozygotes
at the trait level.
- Does that make sense? Because it should make sense. So it all depends on
your level of resolution. At the molecular level, they look heterozygous but at
the trait level, they will produce a mutant so it will appear homozygous. Let us
consider some examples and actually make this a bit more tangible.
- We can see behind him a picture of tomatoes. They provide great examples
of application of Mendelian traits in giving rise to variation in populations.
- So a few words about tomatoes to begin with. They were domesticated in
south & central America roughly 5000 years ago though that is being revised,
possibly 6000 years ago. They were brought by European conquistadors, the
Spanish back to Europe some time b/w 1521 & 1544 where they were known
by various names. By 1622, there were already 4 varieties of tomatoes & we’re
going to see the importance of this very shortly. In fact we’ll see this in today’s
lecture, 4 varieties of red, yellow, orange & gold. By 1700, 7 varieties & things
increased from there. A very long history of breeding & this makes tomatoes a
very useful model for understanding genetic phenomena.
- Let’s give some consideration to tomatoes then with regards to our test for
www.notesolution.com
Unlock document

Here is where we started this term: mendel"s simple traits, the antagonistic pairs we saw it was a useful way to explain simple patterns of inheritance. What we saw in last lecture is that this is inadequate in explaining variation we find in the world around us. This is where we"re at today, continuing with the concept that there are wrinkles in mendel"s laws to help the variation in genetics in the world we see around us. We hear about allelic variation in the world around us all the time. This is a story in nature news and cbc news and published in current. It is an interesting story about blind cave fish and how it is they do or do not perceive light in their environment. The fish in question is an astyanax mexicanus. As the name implies it is a blind cave fish from mexico. It turns out there are many caves throughout the.