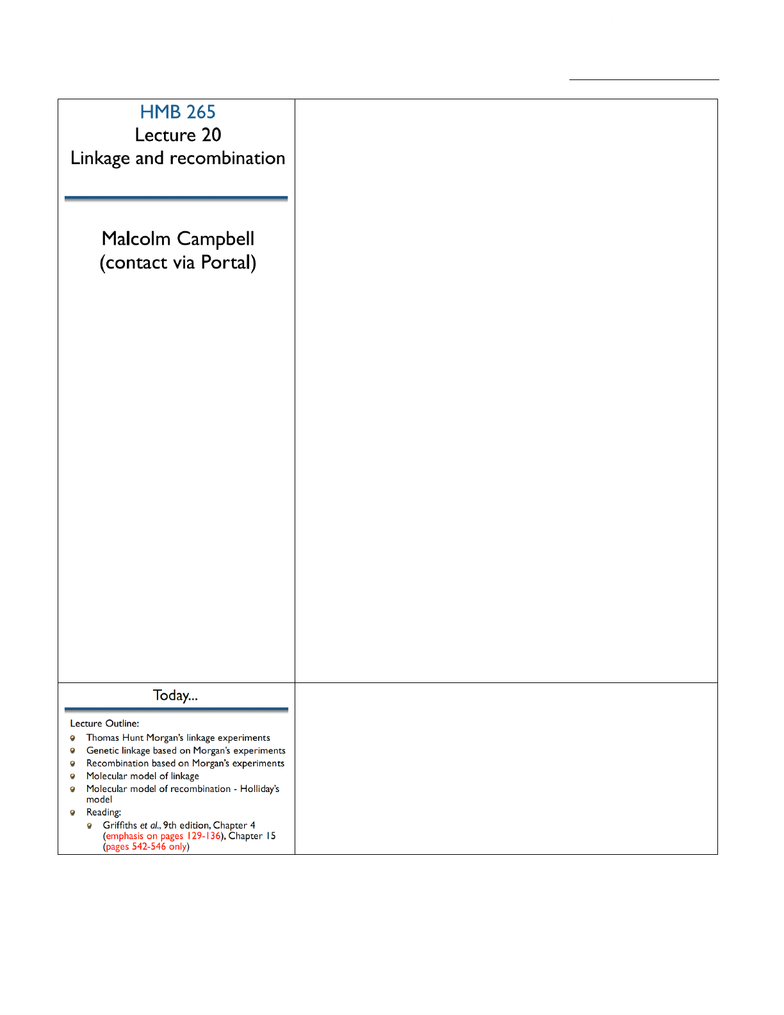 Thursday, March 19, 2009
-Let’s take stock:
-Recall: We started off with Mendel and we were looking at his traits
and the simple model he came up with for the explanation of how these
traits were inherited from generation to generation. And of course, just
by looking around the room and observing the diversity of people that
we see, Mendel’s simple model obviously can’t explain all. We have a
lot of variation that exists out there that must be explained and
accommodated within this basic set of laws that Mendel established.
-A pt. that needs to be made today is that Mendel wasn’t wrong.
What Mendel observed was what he could observed and what he
observed actually, the basic laws hold true for everything that we’re
going to look at. But what he looked at was a fairly unelaborated story,
what we’re going to do now is elaborate Mendel’s simple laws so that
we can accommodate this variation.
-Now, amongst those people who started to bring together what was
known about cell biology with Mendel’s laws, establishing a little bit of
a wrinkle in that now we understand the cellular basis for the
inheritance mechanism that Mendel referred to are these 4 individuals
who established the chromosomal theory of inheritance: Nettie Stevens,
E.B. Wilson, T.H Morgan, and Calvin Blackman Bridges.
-Today we’ll build upon their findings & move beyond a simple
explanation for sex-linked traits that we looked at at the end of the last
lecture & we want to move on from here. We’ll move on from an
important observation that’s based on the pedigree & indeed, it’s based
on the observations that Thomas Hunt Morgan made w/ regards to what
one could view as being the co-segregation of sex determination, so
looking at sex determination of a trait, the co-segregation of that trait w/
some sort of visible trait such as haemophilia or eye colour in the case
of Morgan’s flies. It wasn’t just that the trait accompanied the sexuality
of the organism – its sex – but rather, if you view the determination of
the sex of the individual as being a trait, it means that 2 traits were
moving along together.
-So far, we’ve acted like genes function as individual entities in the
genome but they’re joined up on chromosomes & one might expect that
the genes would move together just like we’ve seen: sex determination
and something like eye colour in flies segregating together.
www.notesolution.com
Unlock document 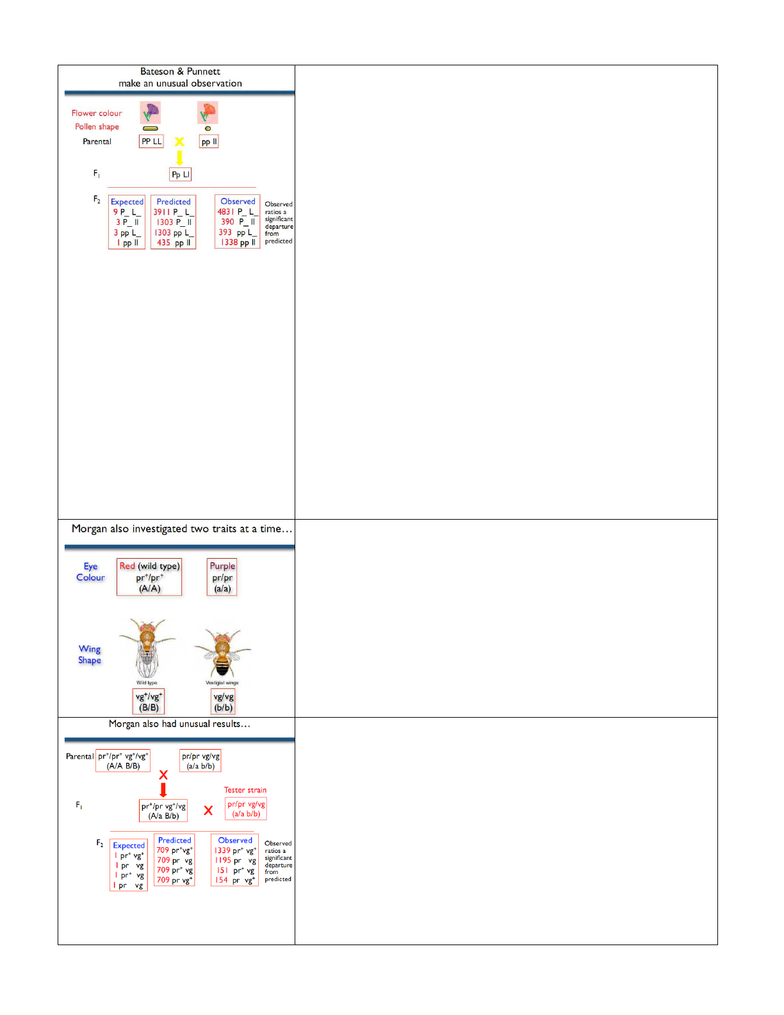 -Let’s get started on giving this consideration to traits moving together
and genes moving together as chromosomes segregation.
-The story begins w/ an unusual observation made by Bateson and
Punnett. They were working w/ plants and looking at the co-segregation
or what should be the independent assortment of 2 different traits:
flower colour and pollen shape.
-In the parental generation, the individual on the left is homozygous
dominant and is a true-breeding individual. On the right, it’s a
homozygous recessive individual for the opposing traits. These traits are
similar to what Mendel looked at so basically, Bateson & Punnett were
just trying to re-iterate the independent assortment of alleles & the
independent segregation of traits w/in the genome. So the 2 individuals
were crossed & gave rise to the F1 hybrid individual that’s
heterozygous at both loci.
-Then they asked, “What would happen if we took this individual &
selfed it to create the F2 generation?” They predicted that they would
find what Mendel had observed & what they themselves had observed
many times before in the past & that is, one should see a phenotypic
segregation ratio of 9:3:3:1. And, as they looked at a large number of
plants, they came up with the predicted numbers associated w/ that. In
actuality, what they observed was different than what they predicted. A
departure from the stereotypical 9:3:3:1 ratio; so they observed ratios
that based on statistical analysis showed a significant departure from the
predicted ratios. This creates a problem, so what’s going on?
-Bateson and Punnett just ignored this problem so they just set it aside
and didn’t really consider it further. It actually took a long time for
Bateson to be won over and Punnett was never won over to what we’re
going to be presented today which we know now is obviously true.
-Morgan actually conducted similar experiments. He looked at 2 traits
at the same time: eye colour (red vs. purple – red is the dominant trait to
purple) and wing shape (wild type vs. vestigial wings – the wild type
are elongated wings that were dominant to the vestigial wings).
-He also had unusual results.
-So he started w/ true-breeding parental individuals and the designations
(A/A B/B) are a means by which you can think of the traits as being the
same as that but the proper designations are shown above that. So he
has the homozygous dominant parent & the homozygous recessive
parent for both of the loci in question & he creates an F1 that is a di-
hybrid individual. Now, he crosses the F1 w/ a tester strain which is
homozygous recessive at both of the loci in question & generates an F2
population which he predicts should segregate in a stereotypical
Mendelian pattern in the following phenotypic ratio: 1:1:1:1 for each of
the types of segregants that he would expect.
-What he finds is something curious. Instead of finding the 1:1:1:1 ratio,
he finds something entirely different which can be seen in the far right
side. He observes that he has a very large number of parental types
www.notesolution.com
Unlock document 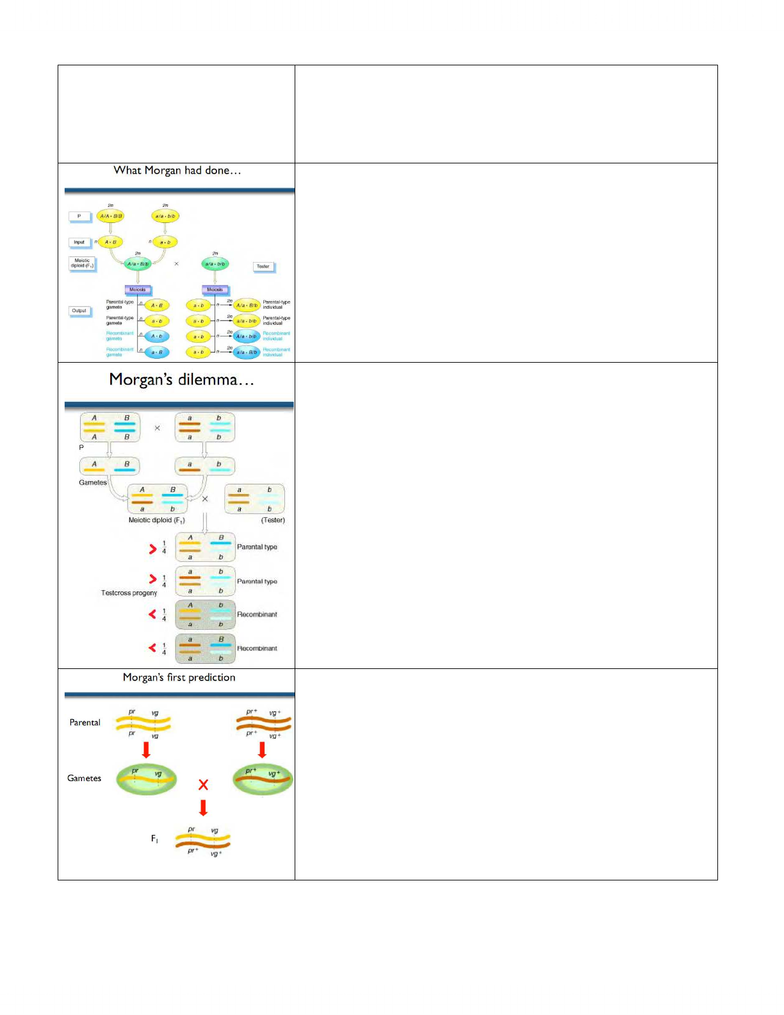 (either the dominant alleles showing as the phenotype or the recessive
alleles showing as the phenotype) & he has very few recombinant
individuals.
-For this lecture and next lecture, when we refer to the parental
type relative to the generation that we’re looking at, we are talking
about the grandparents b/c we’re looking at the F2.
-He generated a simple Mendelian cross and again, this is what he
would expect. Because of independent assortment, we should see an
equal measure of A accompanied by small b or little a accompanied by
big B in the gametes. These should fuse at random and produce a
1:1:1:1 segregation ratio when he crosses w/ the tester strain.
-Here’s the dilemma: He didn’t see a quarter of each – instead, what he
saw was greater than a quarter for each of the parental types and less
than a quarter for each of the recombinant types.
-He generated a hypothesis: Effectively, as opposed to residing in
independent locations w/in the genome (of course he didn’t refer to it as
the genome, he would refer to it as the genetic material or the
chromosomes), the 2 loci in question resided in a similar location, that
is, on the same chromosome. In other words, they were linked.
-Thus, the parental types have either the recessive alleles linked in the
same location as we see on the left hand side or the dominant alleles
linked in the same location.
-What this means is when the gametes are produced, b/c they’re
physically linked to each other, the 2 alleles should move together or
co-segregate. So in the F1 offspring, you should now see a di-hybrid.
-So this was his 1st prediction – that the loci in question were physically
adjoined or linked to each other.
www.notesolution.com
Unlock document

Recall: we started off with mendel and we were looking at his traits and the simple model he came up with for the explanation of how these traits were inherited from generation to generation. And of course, just by looking around the room and observing the diversity of people that we see, mendel"s simple model obviously can"t explain all. We have a lot of variation that exists out there that must be explained and accommodated within this basic set of laws that mendel established. A pt. that needs to be made today is that mendel wasn"t wrong. What mendel observed was what he could observed and what he observed actually, the basic laws hold true for everything that we"re going to look at. But what he looked at was a fairly unelaborated story, what we"re going to do now is elaborate mendel"s simple laws so that we can accommodate this variation.

A certain fish who undergoes normal sexual reproduction can be red or yellow and skinny or fat. There are established true breeding lines of skinny red and fat yellow organisms. Traits are inherited in a Mendelian manner.

From the above answers, an F1 fish is crossed with a wild fat yellow fish whose offspring are both fat and skinny. There are 36 fat red, 44 fat yellow, 7 skinny red, and 9 skinny yellow offspring. Use Chi square analysis to determine whether the observed pattern is consistent with these traits being Mendelian.

A professor asks you to help perform a Mendel-type pea plant experiment. She wants to see how independent some of the traits that Mendel inspected really are. To get started, she tells you she did a test cross and shows you a greenhouse full of F1 pea plants. She asks you to continue her experiment while she has to attend a scientific meeting in Europe, and to cross the F1's to generate F2 offspring. You do this with the help of the professors graduate students and get 3044 plants (wow, you guys did a lot of work!). Mendel looked at seven pea plant traits (https://en.wikipedia.org/wiki/Gregor_Mendel): seed shape, flower color, seed coat tint, pod shape, unripe pod color, flower location, and plant height. If Mendelian inheritance were true, how many plants would you roughly expect to be phenotypically recessive in seed shape, pod shape and plant height, but genetically heterozygous in the other traits? Enter an integer number (round up).

1) Mendelâs examples of inheritance involved transmission of discrete characters such as wrinkled or smooth seed shape, but most phenotypic traits vary continuously, as we easily see with height. How did early population geneticists reconcile these observations?

2) List five evolutionary processes that can generate linkage disequilibrium and one process that breaks it down. Explain your answer.