Thursday, March 26, 2009
- “Mendel Gets Normal”, an introduction to quantitative genetics. Today
we’re going to talk about how Mendel gets normal and by normal he isn’t
talking about going weird to normal but a normal distribution. So what
this lecture serves then is an introduction to quantitative genetics.
- Before we get started on that, let’s take a step back, taking stock of
where we’ve been so far with regards to our understanding of genetics. He
will lead us from the beginning and considering where we just finished up
in Lecture # 21 so going right to the beginning then we’ve seen this in
each lecture right now. Mendel explained patterns of inheritance on the
basis of what he saw happen with discrete traits, how they were passed on
from a parental generation to a F1 generation eventually to a F2
generation according to discrete ratios. We saw that the way Mendel
considered his traits couldn’t be all that simple. For example, the law of
independent segregation, that is, the way in which 2 traits segregated
within an individual couldn’t be as simple as Mendel described because of
course, genes are linked up on chromosomes and we saw with Thomas
Hunt Morgan in his lab took advantage of that fact to begin to assemble
effectively the roadmap or maps to understand how genes were linked
together on chromosomes. Where we finished on last lecture was what
one of Thomas Hunt Morgan’s students, Alfred S, did to understand that
linkage relationship from one gene to the next.
- Just going back to last lecture, recall he started off by doing these 2
point test crosses, that is, looking at pairwise combinations of genes,
hybrid individuals & he took this one step further to look at these
trihybrid crosses 3 point test crosses to establish linkage relationships b/w
3 or more genes simultaneously. Doing this of course in Drosophila
melanogaster & he did that simply by making crosses b/w females that
were trihybrid individuals F1 individuals & crossing them with tester
males b/c recall recombination only takes place to an appreciable extent in
females & simply by counting the offspring & their phenotypes, looking
at then the parental types, the single recombinants & the double
recombinant individuals. On the basis of that info & how we use that to
calculate recombination frequencies, he was able to establish genetic
maps like the one we constructed in the last lecture. We walked through
that in the last lecture & the steps we went through are precisely what we
must go through as we construct genetic linkage maps for both your
tutorial and for the exam.
- That is where we finished off & what he talked about was how we could
use the same method iteratively (over & over) to construct maps of the
way in which traits were linked together on chromosomes & more
specifically we should say linkage groups for any given organisms & he
finished with the tomato.
- There is an important point here with regards to the tomato & that is
we’re still talking about segregation of discrete traits just like what
Mendel was looking at, that is, traits that show some kind of qualitative
mode of inheritance, either you have the trait or you don’t. That is how
these maps were assembled but of course we know in the real world that
is not the way in which variation looks, particularly as we look around the
room. We know that the world looks more like the pictures he shows at
the beginning of every lecture.
- Now we’re finally going to get at trying to understand how we observe
more quantitative variation, not qualitative but quantitative variation in
www.notesolution.com
Unlock document 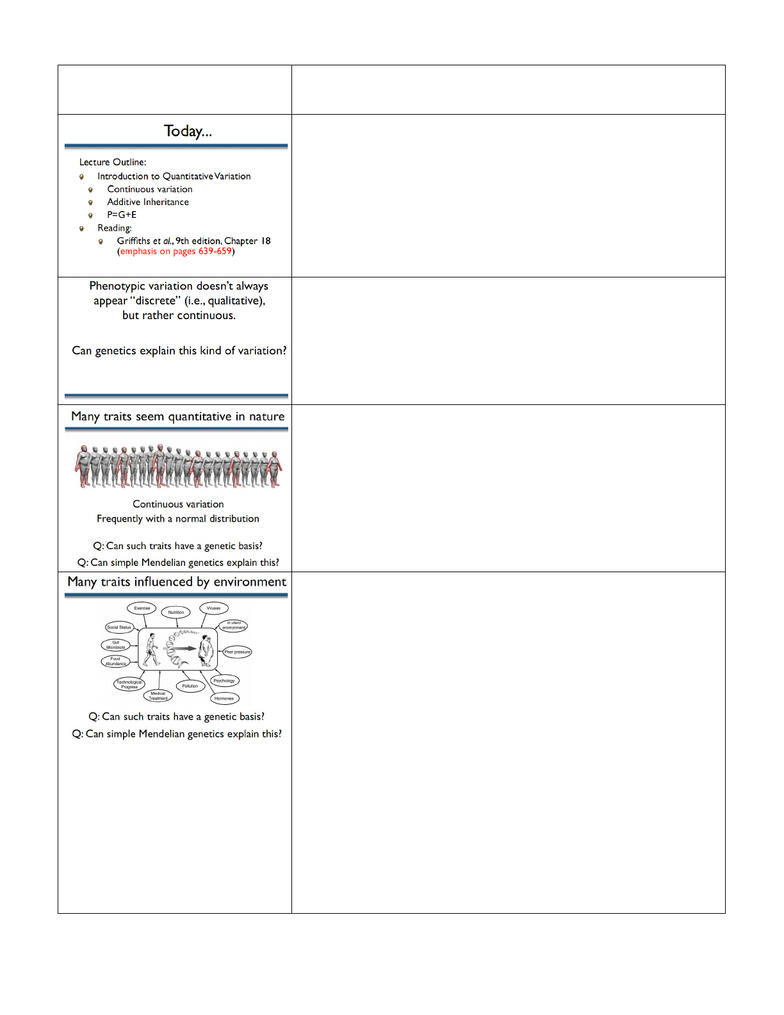 traits, that is where the variation in traits is more continuous, that it is
more difficult to see distinctions b/w discrete forms of the trait and that is
what he wants to consider today.
- Today he wants to address the following. Phenotypic variation as we just
saw doesn’t always appear discrete, that is qualitative, but rather
continuous or quantitative. Can genetics explain this kind of variation and
if it can, what are the tools that we use to describe it and how can we look
at the patterns of inheritance for such traits?
- This is what we’ll look at today. Today we’re going to consider very
simply, an intro to quantitative variation & quantitative genetics which we
will continue in the next 2 lectures so we’ll take a look at continuous
variation, additive inheritance & the most important equation in genetics,
P=G+E.
- Here is the question he said he would address or at least begin to address
in this particular lecture. Can genetics explain quantitative variation?
- We know that many traits appear quantitative in nature, he just showed
us examples of tomatoes but of course, we know that this is also true for
humans.
- Here he is showing changes in body size, height and shape, body
weight, body mass index and so on.
- We know that we can see continuous variation in such traits and we
know that such traits frequently show a so-called normal distribution, that
is a distribution that shows a stereotypical bell-shaped distribution about a
mean where the mean of the population is where the frequency of the
individuals is highest, and out at the tails of the distribution obviously the
frequency of those individuals is the lowest.
- The question is, can Mendelian genetics explain this, and can such traits
have a genetic basis?
- We know that there is a certain problem we must consider. When we see
these traits, we know they cannot just be a product of genetics alone. We
know there must be influence of environment on such traits so here we’re
just looking at body size. We know the factors we see around the outside
together with genetics will determine the trait.
- Things that are really coming to light as of recently are things like
bacteria, microbes we have in our gut will determine if we will have a
svelte physique or less svelte. Food abundance, amount of exercise, type
of food eaten, whether we were exposed to specific pathogens, we know
all these factors will act upon genetic material and work together to give
rise to that phenotype.
- So question again, can simple Mendelian genetics explain this? Can
such traits have a genetic basis? Can we actually track traits where we
know that there is contribution of environment to the trait? Can we
actually figure out where the genetic basis of that trait is? That is what he
wants to address today.
- The way he wants to get at it, to see if we can actually dissect such
complex traits is by taking a step back & looking at what we’ve
understood right from the beginning of these series of lectures & that is
taking a look back at first principles & what we know so far about the
inheritance of traits.
www.notesolution.com
Unlock document 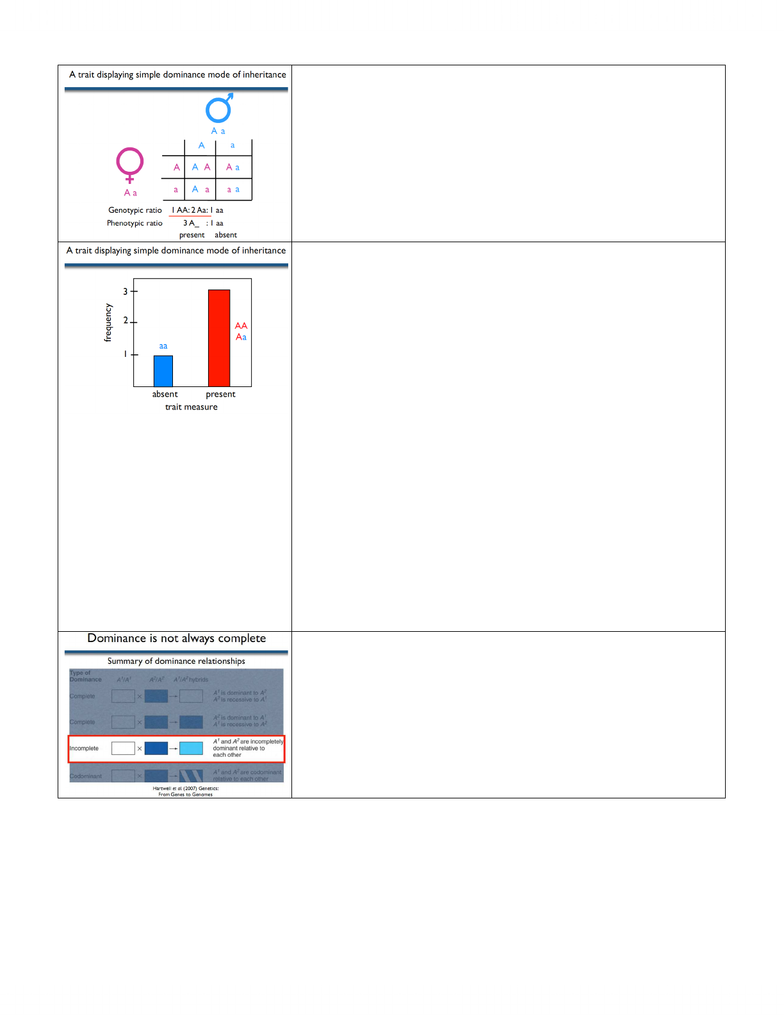 - What we started at the beginning of his lectures is this: simple Punnett
square looking at a simple segregation and reuniting of course of alleles at
one locus.
- So you’ve seen this before. We know that with simple dominance mode
of inheritance that if we cross monohybrid individuals, that is, 2
heterozygotes together with each other, what we’re going to see is the
stereotypical 1:2:1 stereotypic genotype ratio and the 3:1 phenotypic ratio,
that is, what we see presence or absence of the trait.
- If we were to take a look at that as a frequency distribution graph, here is
what we would see. If we took a look at the trait measure, what we would
find is that in the absence or presence of the trait and the frequency, we
would have one individual who does not have the trait for every 3
individuals that have the trait so there we go.
- Of course what is underpinning that distribution and that is an important
point, what is underpinning that distribution is on the left hand side, the
genotype of the homozygous recessive individual and on the other
column, the individuals that have the 3 within this distribution, we have a
mixture of homozygous dominant and heterozygotes. That is going to be
very important for something we will take a look at next lecture so put a
star beside it and say see Lecture 23.
- What he wants to highlight right now is if we take a look at this
distribution, we would know that the individuals without the trait would
be homozygous recessive but if we were to take a look at individuals that
had the trait or the trait is present without genotyping them of course, we
would have no idea whether they were homozygous dominant or
heterozygotes, we would only know that they had at least 1 dominant
allele. So in fact by looking at just traits of individuals for this class we’re
blind to what is going on at the genotypic level. Just by looking at the tall
people, we don’t know if they’re heterozygotes or homozygotes. That is
what is important!
- So that is what we’ve seen already so far. The point he wants to raise is
things aren’t that simple. Clearly they’re not that simple.
- We have an example where things aren’t so simple or as he likes to call
it, a wrinkle on Mendel’s laws. Going back to Lecture 17, we know that
dominance is not always complete just as he showed us. In fact what we
see every now and then is that one can have incomplete dominance.
- Recall incomplete dominance are those instances where one individual
here with 1 allele shows 1 extreme of the trait, the other individuals with
the other allele show the other extreme of the trait. So white to dark blue
in this instance whereas heterozygotes show an intermediate of the trait.
- And he provided examples of this in that lecture, one he said he’d touch
on again.
www.notesolution.com
Unlock document

Mendel gets normal , an introduction to quantitative genetics. Today we"re going to talk about how mendel gets normal and by normal he isn"t talking about going weird to normal but a normal distribution. So what this lecture serves then is an introduction to quantitative genetics. Before we get started on that, let"s take a step back, taking stock of where we"ve been so far with regards to our understanding of genetics. He will lead us from the beginning and considering where we just finished up in lecture # 21 so going right to the beginning then we"ve seen this in each lecture right now. Mendel explained patterns of inheritance on the basis of what he saw happen with discrete traits, how they were passed on from a parental generation to a f1 generation eventually to a f2 generation according to discrete ratios. We saw that the way mendel considered his traits couldn"t be all that simple.