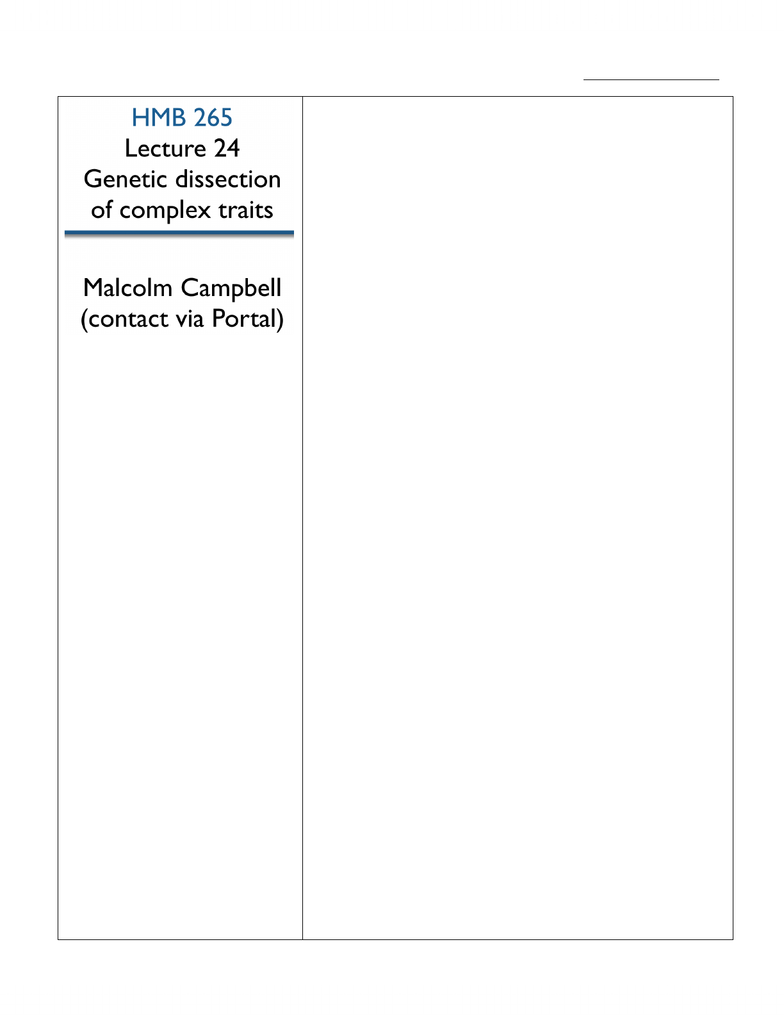 Thursday, April 2, 2009
- Today is one of his favourite lectures because it brings everything
together that we’ve learned so far this term. HMB265 Lecture 24 “Why
Some Things are Bigger than Others”. Today we will look at how one
dissects things like size in a tomato, dogs and even humans using
genetics, so genetic dissection of complex traits.
- Before we start on that, let us take a look at where we’ve been & where
we’re going. So let’s take stock of where we’ve been, what we have seen
so far this term. We started with Mendel & he was looking at traits with
simple modes of inheritance, simple bifurcating traits, you either had 1
aspect of the trait or another aspect of the trait, simple qualitative traits &
that is what we saw at the beginning of term, these simple qualitative
traits.
- What we had to do over the course of the last lecture since Lecture 14
was to elaborate on Mendel’s basic laws & the point he wants to make is
that Mendel is still there, the laws he established are still there but we had
to elaborate on them to accommodate some of the biology we know is
going on. We had to accommodate 1st of all, concepts such as epitasis,
where 1 gene is modifying the effect of another but Mendel was still
there. We moved on doing other modifications such as incomplete
dominance where heterozygotes show an intermediary phenotype but
Mendel is still there. Then we worked on to linkage & we showed that
Mendel here was a little bit wrong. He had looked at traits that were
unlinked so the idea of complete independent assortment applied to a
good many traits but we knew that it didn't apply to all traits, the traits
could be linked together by virtue of the fact that the genes controlling
them were linked together on chromosomes that is linkage groups. Even
still, the basic premises of Mendelian genetics were still there, the idea
that genes segregated & reunited in the offspring gave rise to traits one
observed in 1 generation to the next. The idea of allelic diversity was still
there.
- Finally what we touched on was dealing with this level of complexity,
not qualitative traits but quantitative traits, traits that showed continuous
variation & what we showed was underpinning this variation, we could
still explain things in Mendelian terms. We still saw the segregation of
alleles that were controlling the traits, we saw that it could be a good
many loci of segregating alleles that control those traits or a few loci
controlling those traits but the effects of those loci, that is, the different
phenotypic classes were masked by the environment.
- That is where we finished: Trying to discover the genes that
underpinned the quantitative traits b/c Mendel was still there so what we
were interested in was to try & figure out how much the variation is
attributable to genetic variation & once we figure that out & we figure
out that trait is highly heritable that is attributable to additive effects,
attributable effective to incomplete dominance with 2 alleles segregating
at a locus, how one can go about dissecting that through QTL analysis,
Quantitative Trait Locus analysis.
- We saw that all we had to do was to have 2 dissimilar & relative to each
other inbred parents mate together, create a F1 that showed an
intermediary trait just as one expects in incomplete dominance, self that
individual or the progeny so derived to give rise to an F2 population
where the trait & the alleles are segregating. What we did in the last
lecture then on Tuesday was to walk through the steps necessary to
www.notesolution.com
Unlock document 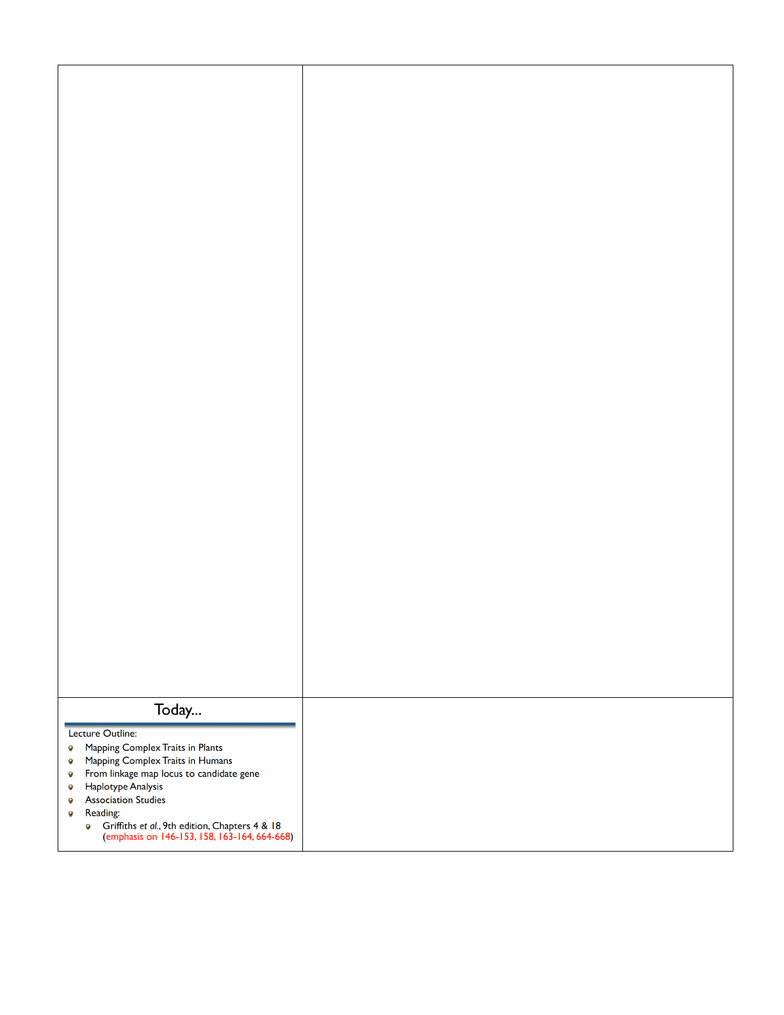 establish a correlation between where the alleles were segregating and
where the trait was segregating and we finished with some diagram.
- We are looking across a linkage group, across here at the bottom
looking across a linkage group with a variety of different loci. We
established on the basis of a statistic, the likelihood of association
between a given locus like the L or the A locus & the trait as
demonstrated by the test statistic. Some people said that this QTL
interval, what does that mean? QTL means quantitative trait locus
interval. Because he is using statistics, he can only state with a certain
amount of probability that that’s where the locus is.
- If he establishes a LOD score of 3 as his cut-off value, he can state with
99.9% certainty that the locus that is controlling the trait lies between the
two dotted lines, with the peak in the middle is the most likely location
for the locus controlling the trait.
- Some of us walked away thinking probably wait why isn’t it just a great
bit spike here of a LOD score for perfect association b/w the locus & the
trait. The reason for that, why you have a mountain rather than a spike is
b/c down here, these genes Q B N & J are linked physically on a
chromosome to the locus that is controlling the trait. So by virtue of
being linked, it means every now & then the segregation of the alleles at
that locus, actually the more often than not, the closer they are to the
locus controlling the trait, they are going to look like they’re controlling
the trait as well but they’re just nearby. It is like guilt by association.
- We’ve seen this movie before, the F & H locus are very close by, we
know that infrequently, crossovers can happen b/w F & H, b/w non-sister
chromatids of homologous chromosomes resulting in a recombination
event we’ll see right here. Most of the time we’re going to have F & H, f
& h travelling along together, the parental types & by virtue of that fact,
what you end up with them is a mountain b/c Q, the alleles segregating at
Q are co-segregating with alleles at L b/c they’re linked together & that
means Q every now & then looks like it controls the trait but not
perfectly so b/c there will be recombination events every now & then b/w
Q and L so the association of the alleles segregating at Q is not perfect
with regards to how the trait is segregating.
- That is where we finished. What he wants us to do is if this still sounds
odd is over the weekend, sit down & look through Lecture 22 how we
worked through the various steps to get to this particular graph. He will
assume we have good knowledge of this & now we discuss if people
really use this.
- Do people use this approach to dissect genetic traits? That is today’s
lecture. Today what we’re going to do is we’re going to look at the slide.
Today is to serve as an example to link the stuff we see in the news and
what we read in newspaper. Back to the topic at hand now, do people
really do this?
www.notesolution.com
Unlock document 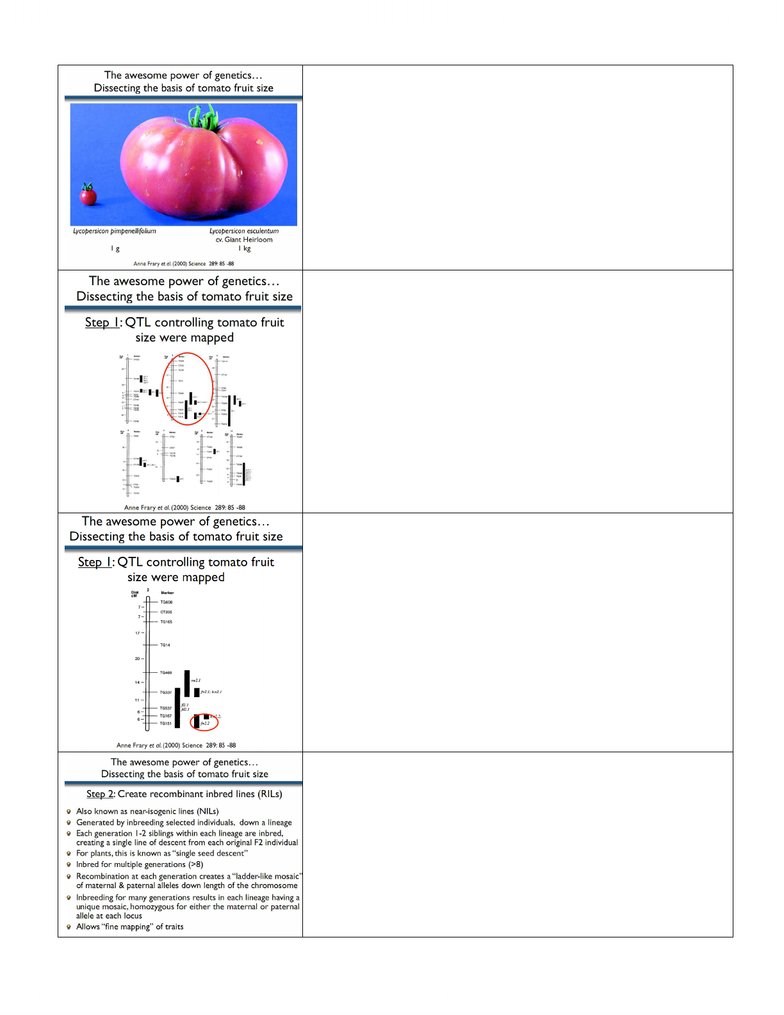 - Of course they do, and he will start with plants because that is where we
ended in our last lecture. We stick with the tomato story and say to us
that just as we worked things through using the example last week, this is
precisely what people like Steve does in real life to identify then genes
controlling fruit size in tomato. They have genetically dissected the basis
of tomato fruit size.
- Step 1 is the exact same as what we described last lecture. They
generated a QTL map, a quantitative trait locus map.
- We looked at 1 linkage group, here are all the linkage groups, well most
of them from tomato, at least those with the QTL on them, linkage group
1, 2, 3, 4, 7,8 and 11. We have a number of different linkage groups and
note each have a QTL interval for fruit weight on them that is what FW
stands for. This is a rather imprecise one here, the confidence interval is
quite long covering a huge chunk of the linkage group. The linkage group
is effectively a genetic map of a chromosome.
- What he wants to do today is to focus on one of the loci they identified
as a quantitative trait locus controlling this particular trait.
- Note that there are a number of different QTL controlling this trait,
there are a number of genes then that control fruit size in tomato but they
focused on one of them and that will be our focus today. It is on linkage
group number 2 and that is on the bottom, it is fw2.2. That is what we’ll
focus on today.
- Because they were able to zoom in on this particular QTL, the way they
zoomed in on this QTL was by making use of the segregating F2
population which they used to construct the QTL map to create what are
known as recombinant inbred lines, RILs.
- He will show us inbreeding down a lineage in a diagram illustrating
single line of descent.
- What he wants to do is to come back to point 6 in the slide again in a
bit.
www.notesolution.com
Unlock document

Choose a trait that goes beyond Mendelâs one trait inheritance. Discuss the inheritance (ex. Incomplete dominance, multiple allele, polygenic, pleiotrophy, linkage, environmental influences), the different phenotypes or anything else that deviates from simple genetics. Mendel got lucky with the traits he chose in his pea plants. If he got more complicated traits and inheritance it would have made his findings almost impossible to come to. Talk about how these traits would have made it hard for scientists like Mendel to figure out inheritance the way he did.

Mendel studied discrete, qualitative traits in peas. Thisorganism helped him induce the rules of inheritance. His work dealtwith simple dominant/recessive relationships between alleles.However, expression of many traits are not governed by a singlegene, rather can involve multiple genes as well as additiveeffects. This kind of inheritance pattern is known as quantitative(See Cogbooks -> Genetic analysis of populations for moreinformation). Edward M East (1916) studied a continuously varyingphenotype characteristic in Nicotiana longiflora. He tookpure-breeding lines of N. longiflora growing long corollasand crossed them with pure-breeding lines growing short corollas.After crossing these lines, F1 offspring had an intermediate lengthfor corolla and had same variation level as in parents. But found avery different result for F2 and F3 than expected.

Discuss the reasons for this result and if it agrees/disagreeswith Mendelâs law. Using obtained knowledge so far, what kind ofcumulative effects would you add to this variation?

The inheritance rule was initially discovered by Mendel and it depends on clear or qualitative traits. The theory was based on a single gene that was responsible for one character. However, expression of many traits are not governed by a single gene, rather can involve multiple genes as well as additive effects. This kind of inheritance pattern is known as quantitative and is demonstrated by East (1916) as well as others. He performed experiments using 2 homozygous, pure-breeding lines of Nicotiana longiflora that differed in corolla length. After crossing these lines, F1 offspring had an intermediate length for corolla and had same variation level as in parents. But found a very different result for F2 and F3 than expected. Discuss the reasons for this result and if it agrees/disagrees with Mendelâs law. Using obtained knowledge so far, what kind of cumulative effects would you add to this variation?