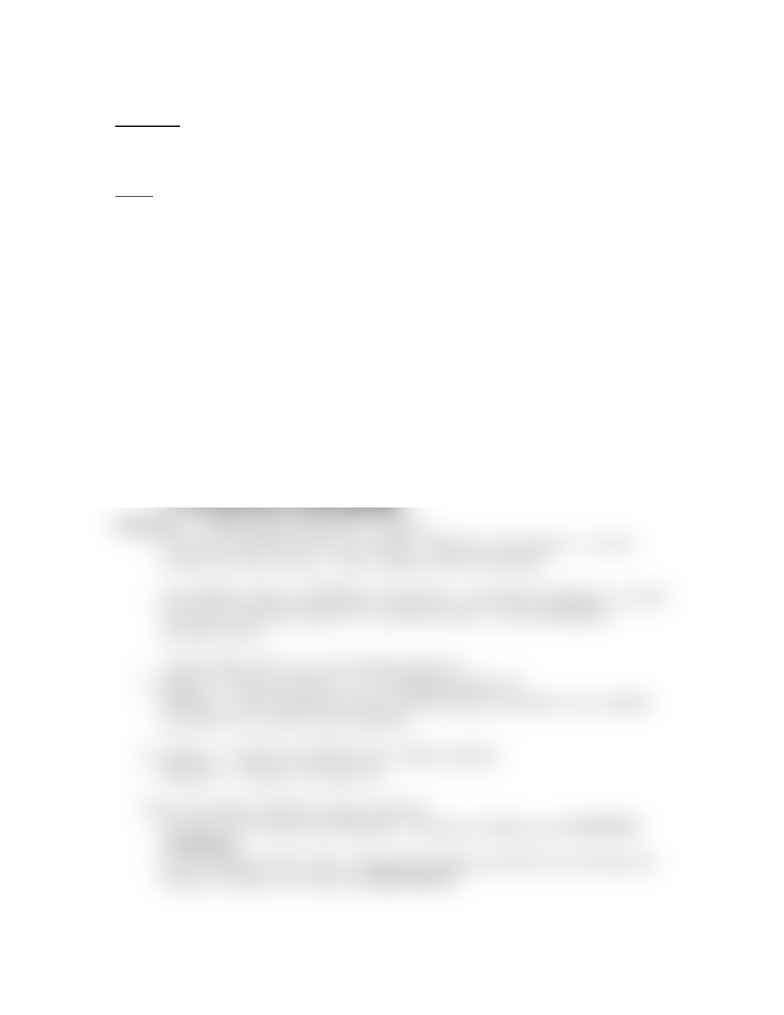 February 14
Hinduism
- interprets Vedas in a philosophical perspective
Vedas:
- Mantras Æ 1500 BCE?
- Brahmanas Æ 1200 BCE?
- Aranyakas Æ 1000 BCE?
- Upanisads Æ 800 BCE? Last word on the Vedas (last section to the corpus)
- in dialogue with each other (Indic traditions) ± familiar with what other groups
are saying ± whether it be critiquing or agreeing; mostly similar but develop
distinct positions regarding certain subjects (e.g. the idea of karma)
2 major philosophical insights:
1) Atman ± idea that underlying all the various changes that we experience on a day to
day basis, the contention is that there is a real eternal self, one stable self, that persists
from lifetime to lifetime and is not affected by all the changes going around us ± physical
self = ego self
- brings individual peace, greater connectedness with everything else in the world
- WKHUHLVQRYLWDOGLVWDQFHEHWZHHQWKHLQVLGHVRIDQ\YDULHW\RIµEHLQJ¶LQWKHZRUOG
- Upanisads contends that there is one single essence, power, spirit and this essence
is called BRAHMAN (not Brahmins)
Brahman ± ³YLWDOLW\HQHUJ\SRZHUOLIH´± ultimate
- to know my Atman is to know all Atman ± ultimate connectedness ± to know
oneself is to know all else ± share complex interconnectedness
- major Hindu critique of Buddhism and Jainism ± geared their teaching to a certain
tiny subset of people (people who could learn them) ± Jain and Buddhist =
monastic/ascetic
- 2 points/ethics that come out of Sramana practice
1) Ahimsa ± living in non-harm ± is it workable/possible? No.
- Hinduism ± deal with harm/violence and determining what types are acceptable
and what are not, and in what conditions
2) Celibacy ± both Jain and Budd. Were celibate religions
- Hinduism ± celibacy is not practical
2 broad orientations/idenfies 2 types of peoples
- 1) person who is interested in Moksha ± in pursuit of highest goal (NIVRTTI
orientation)
- 2) vast majority of the world ± interested in religious goals but not in the present
lifetime, looking to live their life (PRAVRTTI)
www.notesolution.com
Unlock document

Brings individual peace, greater connectedness with everything else in the world. Upanisads contends that there is one single essence, power, spirit and this essence is called brahman (not brahmins) Brahman ;9,90307540710 ultimate to know my atman is to know all atman ultimate connectedness to know oneself is to know all else share complex interconnectedness. Major hindu critique of buddhism and jainism geared their teaching to a certain tiny subset of people (people who could learn them) jain and buddhist = monastic/ascetic. Hinduism deal with harm/violence and determining what types are acceptable and what are not, and in what conditions: celibacy both jain and budd. 1) person who is interested in moksha in pursuit of highest goal (nivrtti orientation)

please read the below and write down your own thoughts and ideas.

Communication skill is the vital for all aspects of our lives; from personal to professional, our lives function because of it. The way someone communicates could entirely differ from the other. But communication is really just a way of establishing relationships. Communication is not only an exchange of words. But at the same time the body is also saying a lot more than the words. Our gestures, hand movements do a lot of the talking for ourselves. This gets a whole lot complex when the interaction is among a diverse community. With different cultural backgrounds, different beliefs and perspectives, the message can be hard to interpret and/or examined. In order to have a positive impact of all the communications and interactions we might have with an individual possessing a different mind-set and culture. We must champion progressive thinking; to listen thoughtfully, debate tolerantly, to freely voice their ideas, and to let others voice theirs and avoid any seeming judgement. John Dewey a pragmatic philosopher and professor at University of Chicago was also a firm believer in progressive thinking mainly influenced by the political times he was living in(WWII). As a communication professional he realized the importance of understanding the reasons behind growing prejudice and hate among certain social groups, and the changes in attitudes and beliefs. (Julia T. Wood; Communication Mosaics; Text. Chapter 2; pg 27)In todayâs diverse world; progression is up another level; awareness of individual differences is extremely important to have an effective communication. This will enable people to have a deeper connection with people who differ from them in some way or the other. Not only will this help in creating relations but also bridging gaps and solving problems that might occur along the way in our lives.

read it and write down your ideas

Even though they have been doing it all their lives, people need to study communication simply because it is so complex. As stated in chapter 3 of the book, we all perceive things differently and "perception and communication influence each other, perception shapes our understanding of others' communication and the choices we make in our own communication" (pg. 41). For the reason that the choices we make and the ways that we view things/situations are changing everyday, communication between two individuals also changes and becomes more complex. Though we can communicate in general, how we communicate and what we communicate depends on how we perceive the world around us, making communication not as simple as it seems. As humans, we create broad categories of things (prototypes) and place people into them (Wood pg. 43). We then go on to create a more detailed assessment (a personal construct) where we measure a person or situation with a certain dimension of judgment (Wood pg. 43). We also place people and situations into stereotypes by making predictive generalizations or simply predicting what the personal/situation will be like or what will happen (Wood pg. 43). With all of these components to a basic path of communicating with others, it's hard to not see why we would study our complex underlying system of human communication. Not only do we make assumptions, but we base our thoughts/actions off of those assumptions which can then all be interpreted differently among various individuals. We study communication to try and dissect all of these interpretations and perceptions of others "to make sense of experience and to predict how we and others will act" (Wood pg. 45). Sometimes we follow a script or just simply act a specific way in a specific situation (like greeting someone and telling them your name) (Wood pg. 45). However, not everyone follows these scripts which just adds to the complexity of communication between us all.

The governing principles state that an individual can only have one resident at a time and not two, and physically moving from one doesn't terminate it as a legal domicile. To end one's place of residence, an individual must acquire a new site and intend to abandon the old one. The individual must have a real fixed permanent home and a principal establishment to the place such that whenever absent, he has the intentions of returning to the residence.

Impact arise in three cases, one where the taxpayer works at a different state and visits the family regularly at final state, the Tax Commission ruled that where he was employed was not a permanent place. Hence the taxpayer was domiciliary termed an Idaho since he owned Idaho driving license and had no indication that he intended to abandon Idaho residence. Second is the Georgia case where the taxpayer moved with her spouse and children and purchased a house in Georgia. Later moved to work in the United Kingdom Embassy but they stayed at the Embassy apartment in 2011, hence they were subjected to Georgia state income taxation. Similar to the third case where the taxpayer worked in Texas and stayed in Georgia but continuously referred Rhode Island home. Hence he became a domiciled at Rhode since it was back.

The author thou questioned Fowlerâs case since the court drew analysis based on their unsuccessful attempt to obtain Florida driverâs license, register the car, register as Florida voter and their intention of being Florida residence as from January 20, 2006. It failed to attribute the sale of stock on February 3, 2006, where Mrs. Fowler served as Assistant Secretary for three years in North Carolina. The charitable contributions after the sale of the business in 2006 and during that year, the taxpayers spent most of 2006 - 2007 days in North Carolina before finalizing the proposal.

The court and IRS'S brings out the contradiction in the governing principles of determining an individual's domicile. Since thou, the Fowlers changed their address to Florida they continued using certain correspondence and billing and bank statements from North Carolina. The insurance policy that they purchased on their North Carolina home for a period of July 31, 2006 to July 31, 2007 had a stipulated location that dwelling is not seasonal or secondary. The court failed to consider Fowlers' behavior prior to January 20,2006 and emphasized on a single observed event, hence ignoring taxpayersâ subsequent conduct.

QUESTION: INTERPRETATE THE ABOVE ARTICLE IN YOUR OWN WORDS.