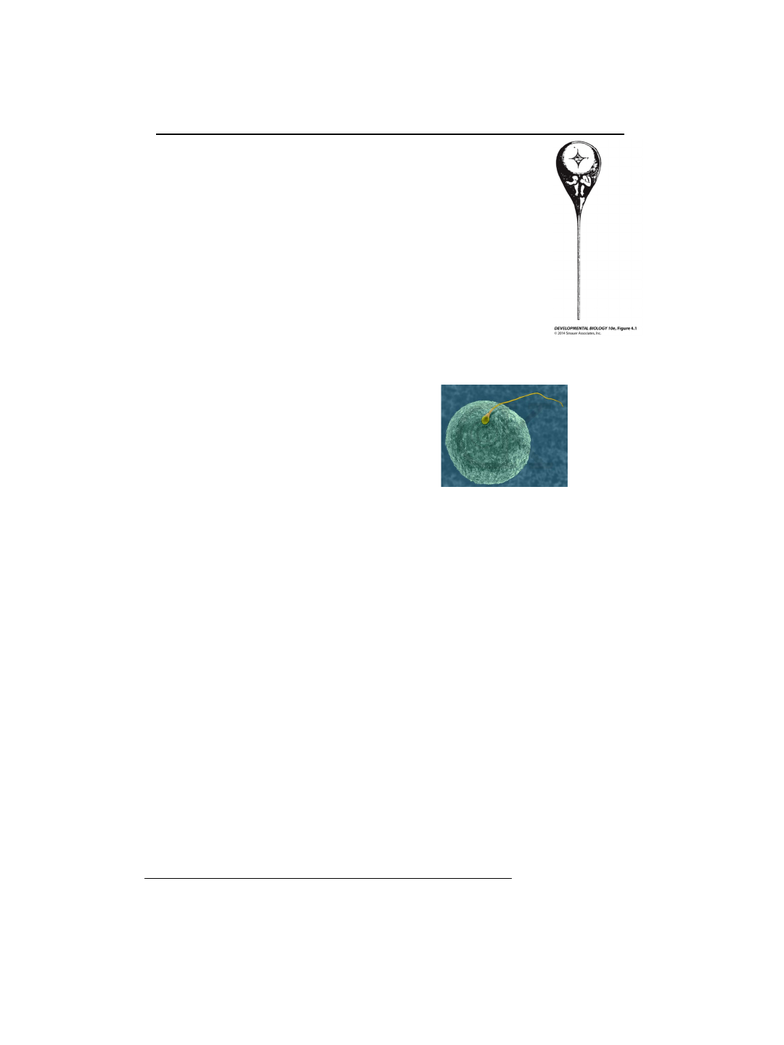 14-11-02
1
Development begins with the fertilization of an egg by a sperm.
The sperm must;
• seek out the egg,
• fuse with it,
• deliver its cargo (haploid nucleus and others).
The egg must;
• make itself apparent,
• respond appropriately to its contact (only its own species),
• allow fusion but prevent the fusion of additional sperm,
• and activate egg metabolism to start development.
Gametogenesis: Process including meiosis and the distinct pathways of
cellular differentiation responsible for the formation of mature
spermatozoa and eggs.
Pgs 117-142
Spermatogenesis
Spermatogonia → primary spermatocytes → secondary spermatocytes →
spermatids → spermatozoa
1. Meiosis in males is a continual process from puberty until death.
2. When spermatogonia divide, one daughter cell remains a stem cell and
the other becomes a spermatocyte, ready to undergo meiosis.
3. At the completion of meiosis, there are four haploid spermatids, which
resemble other cells in having cytoplasm and nucleus.
4. By the end of the process of spermatogenesis, the spermatids change
their physical structure to become mature spermatozoa (sperm). This
involves getting rid of cytoplasm and developing an acrosomal body and
tail.
5. All four haploid products become functional sperm.
Fertilization - the joining of a sperm and an ovum (egg) to form a diploid
zygote
People have known about sperm for centuries and it took a long time to ﬁnd the mammalian egg
Every cell of an organism comes from the fertilized zygote
Sperm is motile and has to ﬁnd and fuse with the egg
Egg has to differentiate between different species sperm
Single celled motile structures
Know #5
Produce 4 haploid cells through meiosis that are all functional
Need stem cell in the process
Special structures in the sperm
Unlock document 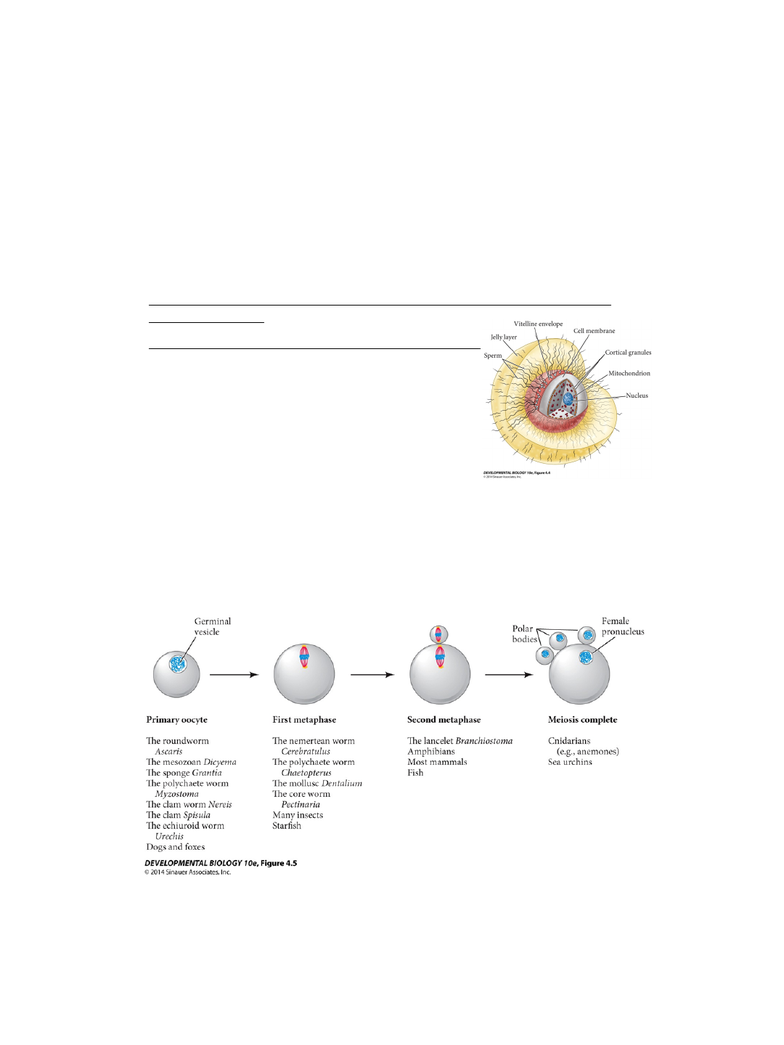 14-11-02
3
Oögenesis (mammals)
1. Meiosis begins simultaneously in all primary oöcytes in late embryonic/early
fetal period, proceeding to late prophase I.
2. All oöcytes then go into a resting phase until an ovarian follicle develops further.
3. At that point, meiosis resumes. The mature ovum that is released is a secondary
oöcyte.
4. In telophase I, one of the meiotic products becomes a polar body, with very little
cytoplasm; the other product receives virtually all the cytoplasm.
5. If fertilization occurs, MII (meiosis II) is completed, with formation of a
second polar body.
6. Only one of the four haploid products is functional.
7. In female embryos, there are several million ovarian
follicles;
at their birth about 2 million;
of which only 400 mature during lifetime.
Stages of egg maturation at the time of
sperm entry in different animal species
Cytoplasmic stores
-proteins
-ribosomes and tRNA
-mRNA
-morphogenic factors
-protective chemicals
Meiosis in mammals is not complete until fertilization occurs
In oocytes only one of the haploid cells are functional
The other cells are polar bodies
Female meiosis is timed speciﬁcally and develop before birth
In different animals meiosis pauses until fertilization occurs
In most mammals including humans it pauses at Meiosis II
End up with 4 eggs and only 1 functional cell
Polar bodies cannot be fertilized and don’t have enough cytoplasm
The amount of polar bodies can differ and some of these may not complete meiosis
Oocyte is the mature product of meiosis and once released from ovary it is an egg
Polar bodies donate everything to the egg
Unlock document