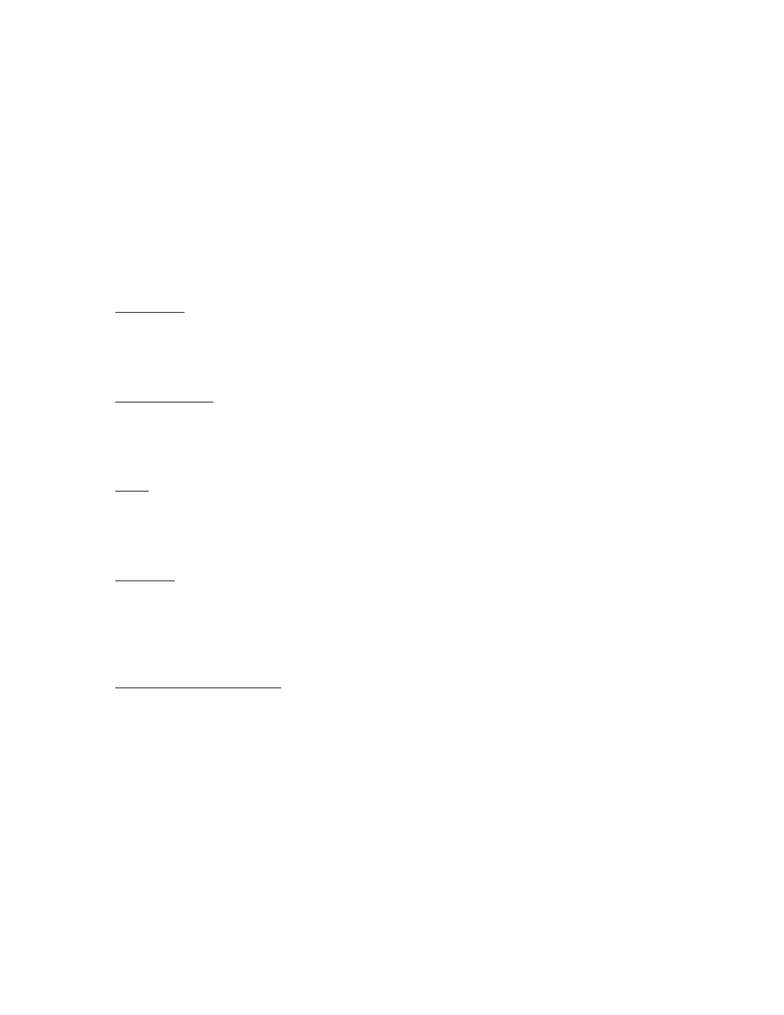 Nicole Wallenburg
Economics
Mr. Parkin
Nov 2, 2011
Economics – Lecture # 14
Classifying Goods and Resources
What is the difference between:
 London Police department and Brinks security
 Fish in the Atlantic Ocean and fish in a fish farm
 A live concert and a concert on television
o These and all goods and services can be classified according to whether
they are excludable or non-excludable and rival or non-rival.
Excludable
A good is excludable if only the people who pay for it are able to enjoy its benefits.
 Brinks security services, Cooke Aquaculture’s fish, and a live Coldplay concert
are examples.
Non-excludable
A good is non-excludable if no one can be prevented from enjoying its benefits.
 The services of the London police, fish in the Atlantic Ocean, and a concert on
network television are examples.
Rival
A good is rival if one person’s use of it decreases the quantity available for someone else.
 A Brinks truck can’t deliver cash to two banks at the same time. A fish can be
consumed only once.
Non-rival
A good is non-rival if one person’s use of it does not decrease the quantity available for
someone else.
 The services of the London police and a concert on network television are non-
rival.
A Four-Fold Classification
 Private Goods
o A private good is both rival and excludable.
 A can of Coke and a fish on Cooke’s Aquaculture farm are
examples of private goods.
 Public goods
o A public good is both non-rival and non-excludable. Everyone can
consume a public good simultaneously and no one can be excluded from
its benefits.
 National defense is the best example of a public good.
 Common Resources
o A common resource is rival and non-excludable.
Unlock document 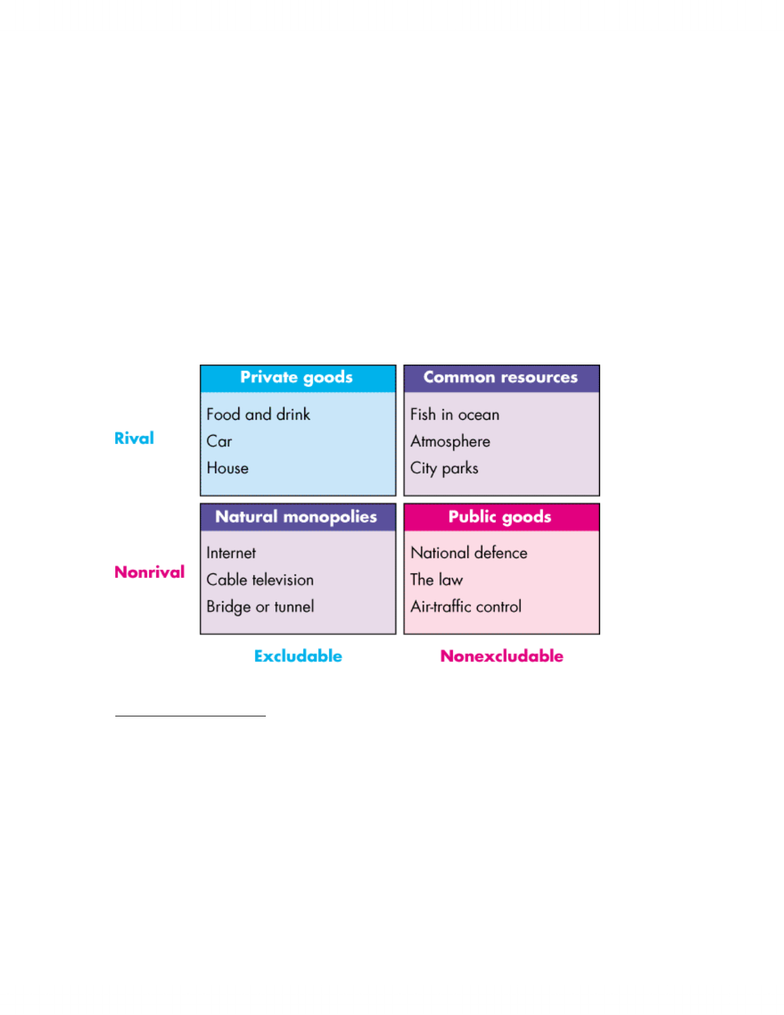 Nicole Wallenburg
Economics
Mr. Parkin
Nov 2, 2011
o A unit of a common resource can be used only once, but no one can be
prevented from using what is available.
 Ocean fish are a common resource.
 They are rival because a fish taken by one person isn’t available
for anyone else.
 They are non-excludable because it is difficult to prevent people
from catching them.
 Natural Monopolies
o In a natural monopoly, is a producer who can serve the entire market at a
lower cost than two or more firms can.
o Natural monopoly arises when the good or service can be produced at zero
marginal cost. Such a good is nonrival. If it is also excludable, it is
produced by a natural monopoly.
 The Internet and cable television are examples.
Public Goods
The Free-Rider Problem
 A free rider enjoys the benefits of a good or service without paying for it.
 Because no one can be excluded from the benefits is a public good, everyone has
an incentive to free ride.
 Public goods create a free-rider problem—the absence of an incentive for
people to pay for what they consume.
o The value of a private good is the maximum amount that a person is
willing to pay for one more unit of it.
o The value of a public good is the maximum amount that all the people are
willing to pay for one more unit of it.
 To calculate the value placed on a public good, we use the
concepts of total benefit and marginal benefit.
Unlock document 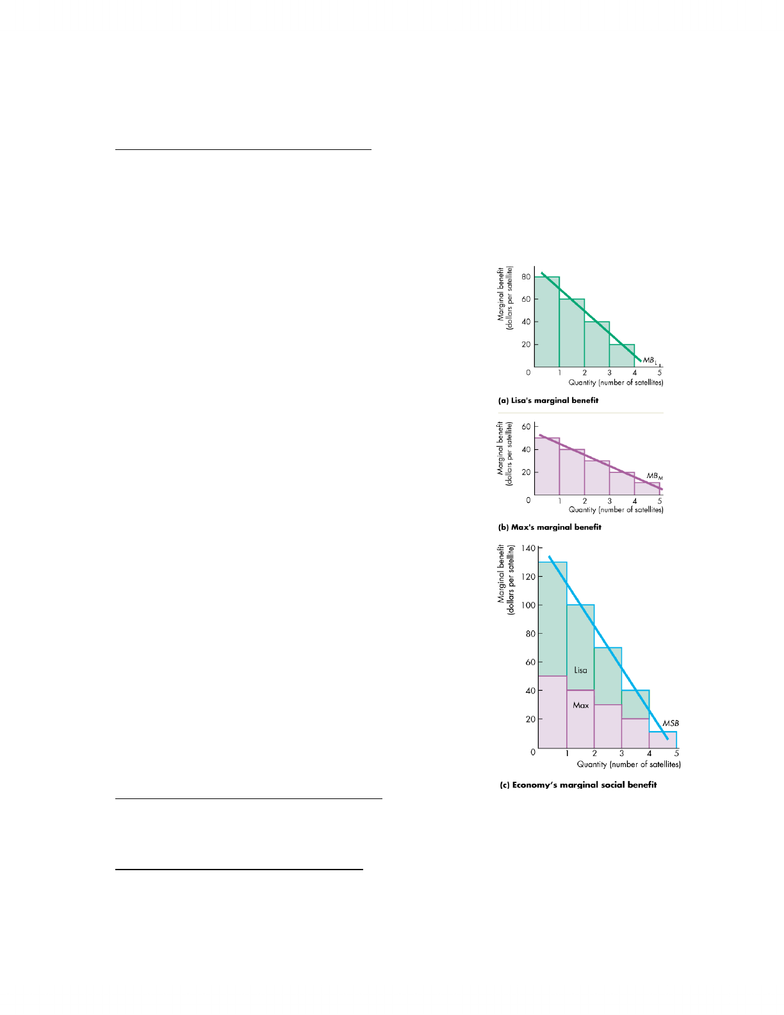