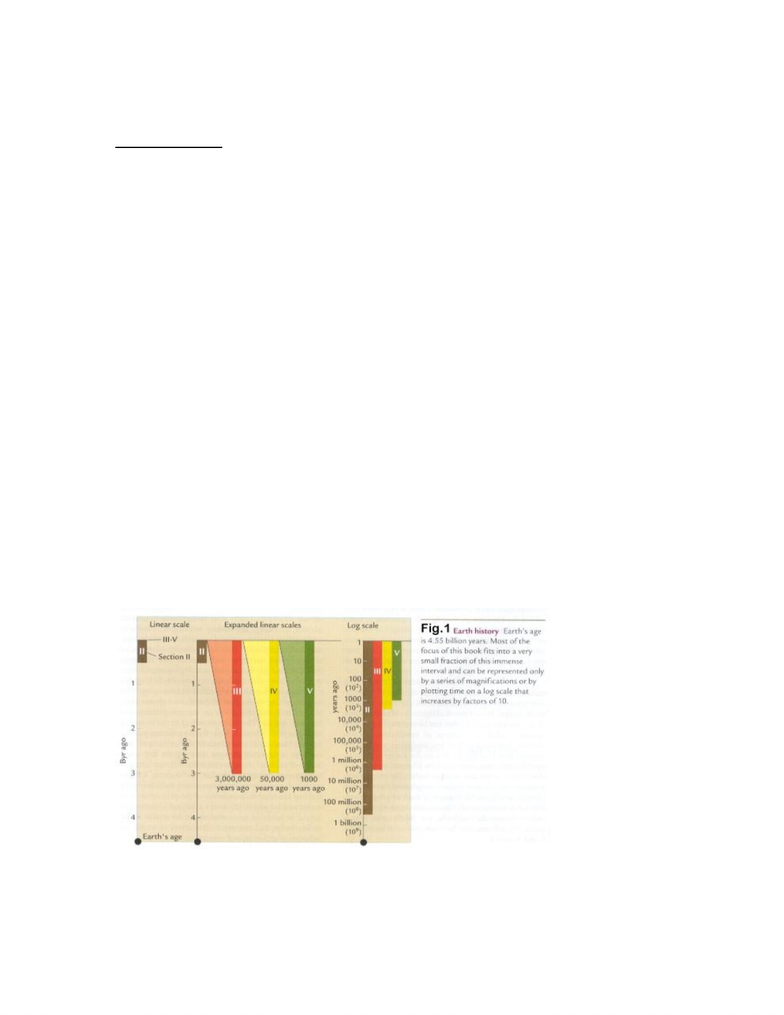 Chapter 12 Climate - The Basics
1.0 Introduction
Now that we know everything about weather, let’s move on to climate. Everyone's
talking about climate change, but most who do so don't understand the basic controlling
concepts very well. In this chapter, we’ll fix that!
If you need to review the difference between climate and weather, go back to the Unit 3
introduction, please.
Today, Earth's global climate is highly favorable to life, but it was not always so.
Certainly, we know that some 21,000 years ago the global climate changed such that
enormous sheets of ice covered all Canada and Northern Europe, consuming so much of
Earth's water that sea levels were about 110 meters lower than today. Further back, about
100 million years ago, climate had changed such that there was no ice anywhere - even at
the poles - and sea levels were obviously very high. The first part of this chapter will
concentrate upon the major factors that cause Earth's climate to change, the ways we
track those changes, and we'll conclude with a graphical presentation of what large-scale
changes we know about. The primary aim of this whole section is to educate us
sufficiently that we can better come to terms with the climate changes looming today and
in the near future.
Any attempt to understand climate changes must begin with a full appreciation of
geologic time. Human life spans are usually measured in decades, and we feel fortunate
to trace family history as far back as great-grandparents. Almost all of Earth's long
history lies immensely far beyond this human perspective.
By necessity, this section on climate focuses mainly on the last few hundred million
years. Of course,
the further back
in geologic time
we search, the
fewer the facts
available. One
reason for that
limitation is
climate itself:
the relentless
action of
weathering (by
water and air)
has eroded most
of the deposits that would have helped us understand climate.
Unlock document 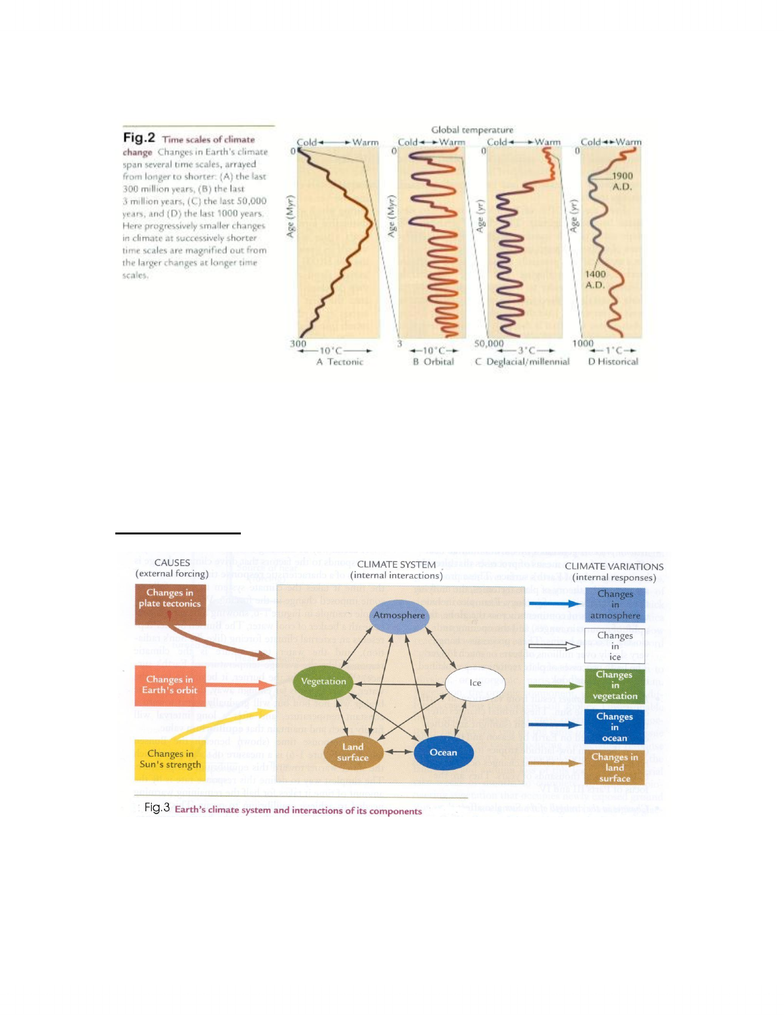 Earth formed roughly 4.54 billion years ago. Figure 1 shows, on a linear scale, all of
geologic time, and then the two common ways of plotting small fractions of that total:
expanded liner scales and logarithmic scales. The log scale method compresses the
longer periods of time and expands the shorter ones; we will make some use of both
methods during this chapter. Figure 2 shows the climate changes on Earth over the last
300 million years by means of a sequence of expanded linear scales. Clearly, as we work
from longer to shorter time intervals, we are looking at increased resolution of data.
2.0 Climate System
Figure 3 illustrates the components of our climate system. The central part shows how
interactive the components are, and we should expect that a significant variation in one of
the components will result in a change to other components - thus a climate change.
Throughout Earth's history, the three major causes of climate change have been: changes
in plate tectonics, changes in Earth's orbit, and changes in Sun's energy (the left side of
Unlock document 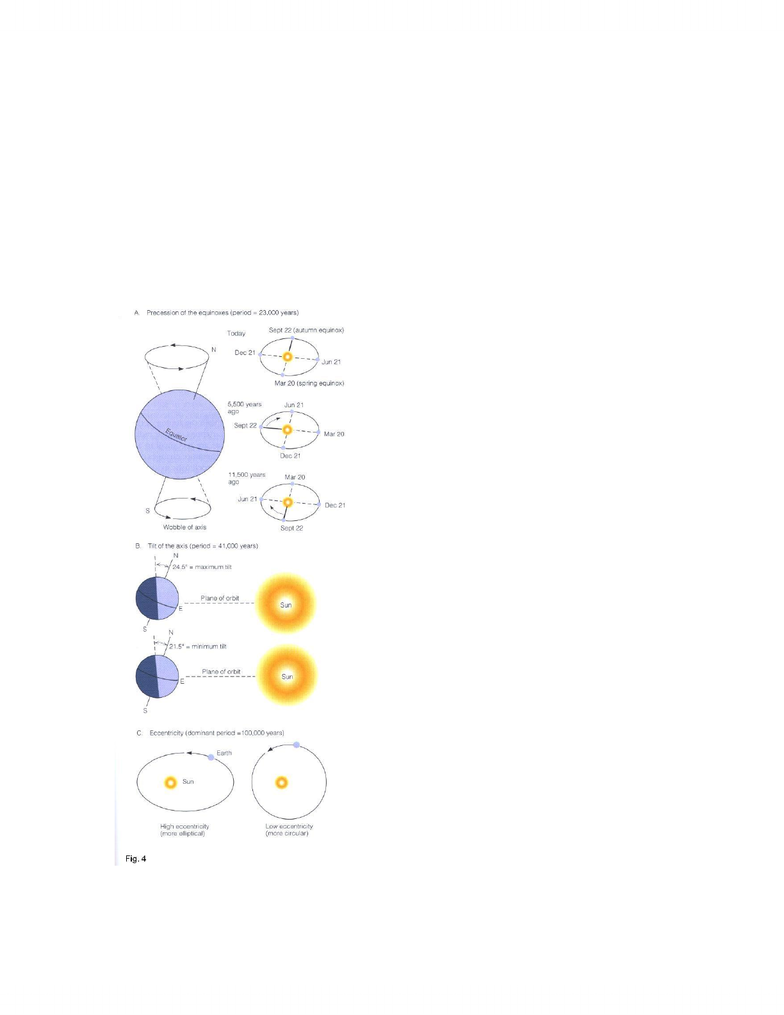 Figure 3). Climatologists use the word "forcing" when they refer to factors that cause
climate changes, and they use the word "response" to refer to variation in climate
produced by the forcing event. When we consider specific events in Earth's history we
will consider what forcing could have produced that response, but for now, let's just
review - very briefly - the properties that relate to each forcing factor.
2.1 Tectonic Processes
We all know by now that tectonic activity is caused by Earth's internal heat engine, and
that the geography of the planet is constantly being changed by those processes. Because
these changes take place so very slowly, it's sometimes hard to see how global climate
might be changed by them. On the other hand,
as we'll see later, circulation of ocean currents
depends greatly upon the location and
arrangements of continents.
2.2 Earth Orbital Changes
We'll touch on these from time to time, so it’s
probably best to quickly review them here. In
the early 20th Century, Milutin Milankovitch
recognized and explained three forms of
variation in position of Earth’s axis and its
orbit around Sun. He noted that these variations
can cause the amount of solar energy reaching
Earth to vary by as much as 10%, thus
obviously must have some effect upon climate.
First, according to Milankovitch’s calculations,
Earth’s orbit around Sun varies in a systematic
manner over periods lasting 100,000 years. At
times, Earth’s orbit is highly eccentric, at other
times it is almost circular (Fig. 4).
Second, Milankovitch’s calculations showed
that the tilt of Earth’s axis changes
systematically from 21.5o to 24.5o in a pattern
that repeats every 41,000 years. As far as the
northern hemisphere is concerned, a lower tilt
means less radiation in the summer and more in
winter (i.e. contrast between summer and
winter is reduced).
Unlock document