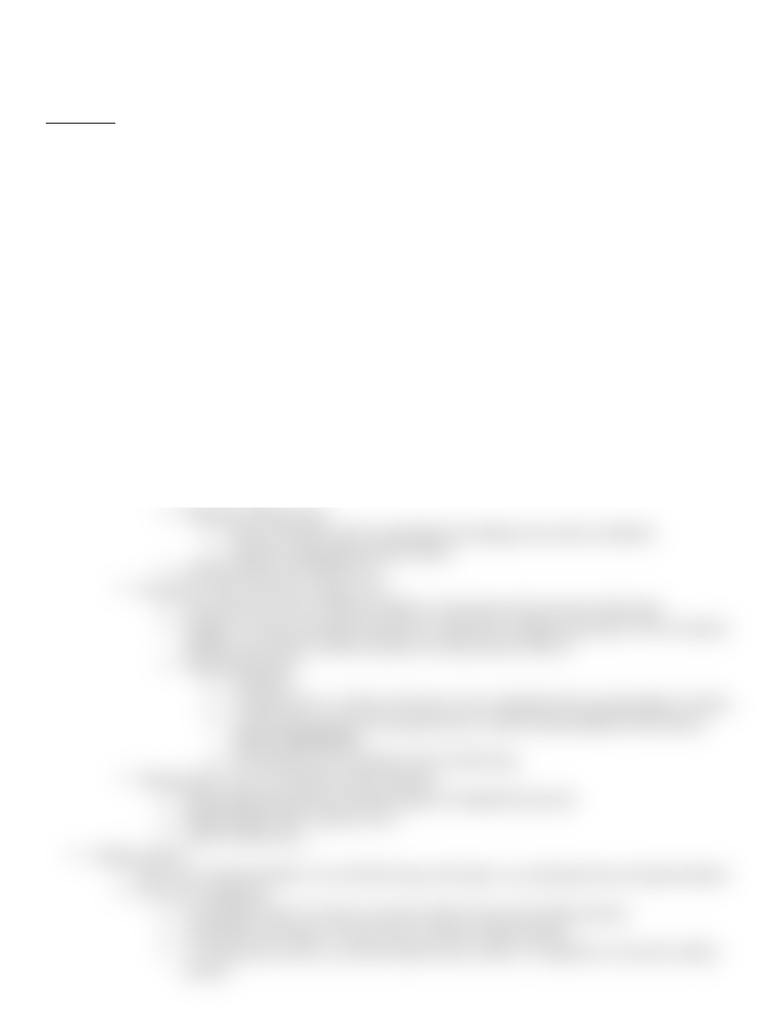 Human Physiology
Monday, February 1, 2010
“Respiration II”
Ventilation
•Process by which air moves in and out of the lung
•Inspiration/inhalation
Active process; requires contraction of diaphragm muscles and intercostal muscle
Contraction of external intercostals and contraction of diaphragm increases pressure
gradient between interpleural space and lungs
•Only takes a relatively small change in pressure
•Cutting a hole in the diaphragm will interfere with inspiration (interpleural
pressure will be atmospheric
Lung inflates because have larger surrounding area
•Expiration/exhalation
Passive process normally; lung and chest wall moves back to equilibrium
Active process during exercise or spontaneous hyperventilation; muscles of abdominal
wall/internal intercostals; cutting the internal intercostals would prevent voluntary expiration (i.e.
won’t be able to exercise)
•Lung compliance
Relatively small changes in pressure required to inflate lung
Volume change per unit pressure change
Large = large volume change for small pressure change
Small = small volume change for large pressure change
2 factors
Elasticity of lung tissue
•Fibres of elastin (easily stretched) and collagen (not easily stretched)
•Specific arrangement of these fibres
Surface tension at alveolar level
Can plot it with a pressure-volume curve
Take lung out, slowly inflate & deflate it and measure the pressure (dog lung)
Initially, you don’t get large increase in volume for a change in pressure; if you continue
inflation, get a large volume increase for each pressure interval
Important features:
•Nonlinear
•At high and low volumes, the lung is less compliant than at intermediate volumes
•At the same pressure, the lung has more volume during deflation than during
inflation (hysteresis)
•Note that the curve operates on the whole lung
Measuring PV curve in humans must be indirect
Intraesophogeal pressure assumed equal to intrapleural pressure
Inhale/exhale small volumes of air
About 220mL/cmH2O
•Surface tension
Force at air liquid interface; if you fill the lung with saline, you eliminate the air-liquid interface
PV curve experiment
Lung filled with air  must overcome elastic forces and surface tension
Lung filled with saline  must only overcome surface tension
1/3 of pressure used to overcome elastic forces, other 2/3 required to overcome surface
tension
Unlock document

1 kg of water is boiled at atmospheric pressure tobecom1.671m^3 of steam at atmospheric pressure. What is thechangein the systems internal energy during the process? (densityofwater = 1000kg/m^3,
1atm = 1.01x10^5 Pa)
Interactive summary problem: an engine cycle A pressure volume diagram for an engine cycle is shown in the interactive simulation. The cycle has three processes, and the points where one process ends and another starts are labeled A B and C. The temperature at two points in the cycle is shown and you can determine the pressure and volume at each point from the graph.

Snorkeling by humans and elephants. When a person snorkels, the lungs are connected directly to the atmosphere through the snorkel tube and thus are at atmospheric pressure. In atmospheres, what is the difference ?p between this internal air pressure and the water pressure against the body if the length of the snorkel tube is (a) 27 cm (standard situation) and (b)3.6 m (probably lethal situation)? In the latter, the pressure difference causes blood vessels on the walls of the lungs to rupture, releasing blood into the lungs.