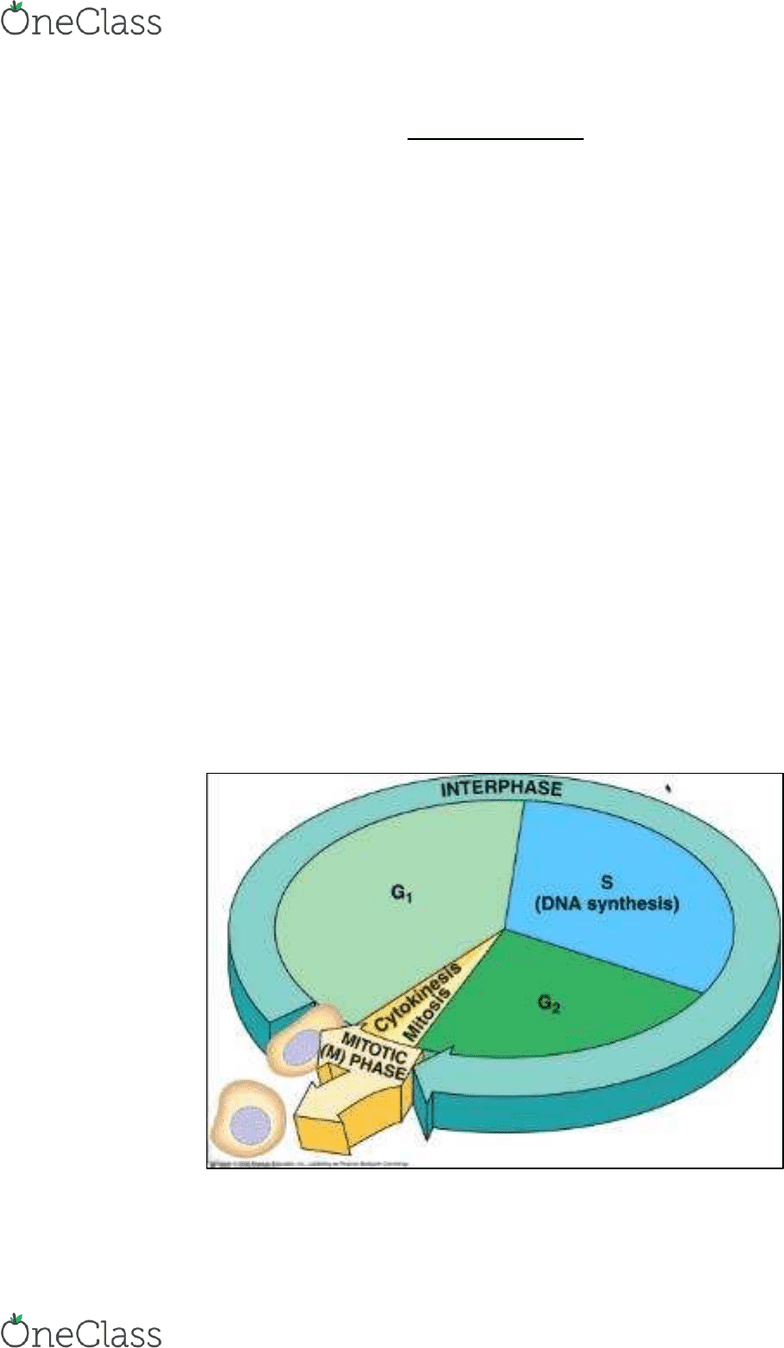 1
Biology Exam 4 Notes
Cell Cycle
 The life of a cell
o Represented as a cycle – circle
 Stages of Cell Cycle
o Starting point is cytokinesis
 The end of cell division – the end of the life of one cell and the
beginning of the life of a new cell
o The first stage after cytokinesis in a cell is G1
 G stands for gap – so also known as Gap 1
o After G1, the next stage is S
 S stands for Synthesis - stood for the synthesis of DNA which is now
referred to as DNA replication
 The S phase is when we have replication – so the DNA is going to
replicate during the S phase
o After S, the next phase is G2 (Gap 2)
o Finally there is Cell Division
 Cell division ends with the division of the cytoplasm – Cytokinesis
 And then you go back into G1 and restart the cycle
 Interphase
o Everything from the beginning of G1 all the way around to the end of G2
o After interphase, there is some form of cell division
 What determines when a cell divides?
 When in the cell cycle, in G1 there is a signal (checkpoint)
o The cell can either pass the signal or get stopped at
that point and go to G0
o If goes to G0 (G naught), the cell will not divide and
will stay there until it dies
o Start at beginning in G1
 In interphase
find more resources at oneclass.com
find more resources at oneclass.com
Unlock document

2
 Go into S where DNA is synthesized and then go into G2 and
then go into cell division
 In this case cell division is mitosis but it could also be meiosis
Components of Cell Division Regulation
 Cyclin
o A protein that varies in concentration depending on the cell cycle
o As we go around the cell cycle, the amount of cyclin accumulates
o G1: Little or no cyclin present at all
o S: low cyclin by the end of the S phase
o G2: relatively high levels of cyclin
o At the end of cytokinesis, all of the cyclin is destroyed
o How fast cyclin accumulates determines the rate of cell division
 Lot of cyclin – fast cell division
 Not a lot – slow cell division
 CDK: Cyclin Dependent Kinase
o Remains in constant concentration
 Always present
 Needs cyclin
o Lot of cyclin joins with CDK – creates MPF molecule
 MPF: Maturation Promoting Factor
o Cyclin and CDK together form this
o The presence of this factor triggers the cell to undergo mitosis
o Presence of MPF triggers cell division
find more resources at oneclass.com
find more resources at oneclass.com
Unlock document