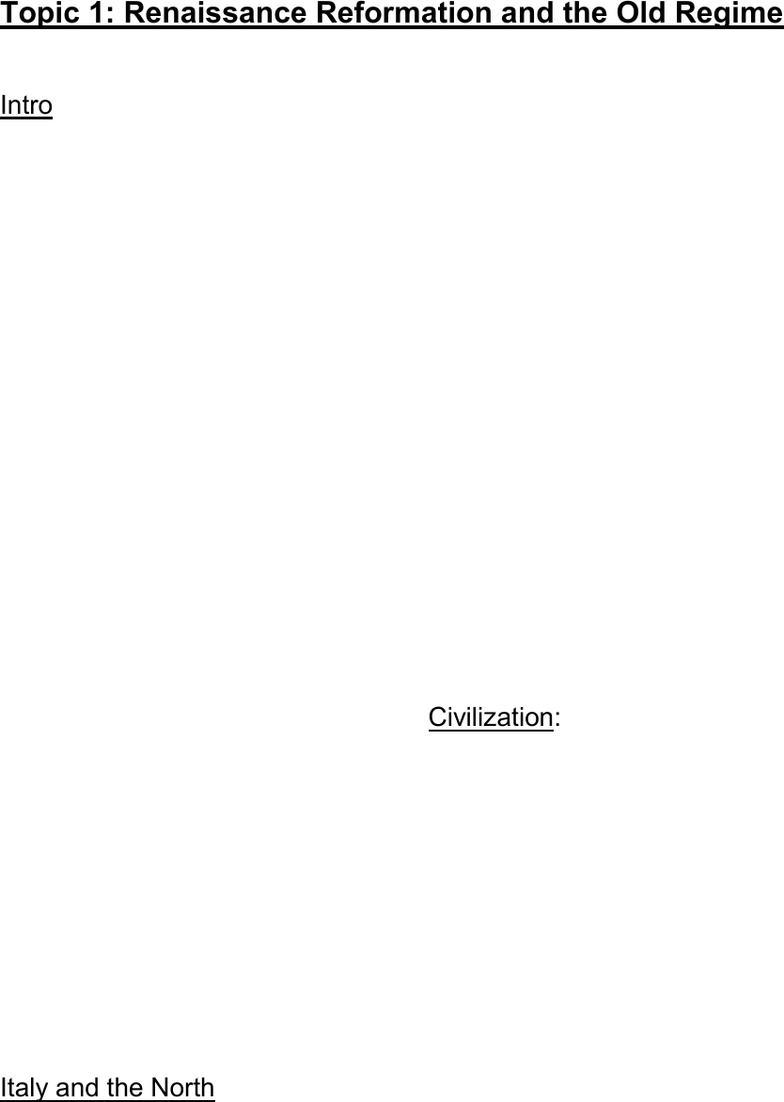 Topic 1: Renaissance Reformation and the Old Regime
1/16/14
Intro
I. Technology
• Social development- appears in several characteristics of
culture
-Technology of energy: efficiency
-Technology of info: begins with literacy itself; literacy is a
technology that changes the way we think
-Organization/urbanization: can you organize & maintain
order within; effectiveness of administration; how big of an
area can you maintain
-Power projection/technology of warfare
• Technology is the great engine of social
change/development
• Corollary- must be able to imagine and maintain it
II. The 1500’s
• 1500- western Europe was (compared to India & China)
relatively poor; but it was similarly social (had slavery &
serfs)
-Since then, the west has become increasingly different from
the rest; Neil Ferguson’s Civilization: how it became different
(guns, power projection)
• Battle of Diu (1509): from this moment on, the west had
superiority over the rest (trade, aerial, sea, Naval and
commercial superiority)
• 1775- James Watts (steam engine); invention of the modern
world (Birmingham, England)
• Things being invented, social change, etc, made west
different than rest
• Filo T. Farnsworth- high school student who invented TV
1/21/14
Italy and the North
• Deep time- 1500 social structure of medieval Europe; went back to
Rome (what survived and what did not)
Unlock document

Already have an account? Log in
-Octoi Tax: the way the city financed their government until 1940;
the tax itself was liberally ancient
• Also Roman: the land use of Europe. There were a lot of Serfs
• Vecus- villages; the origins of all this had disappeared but the
habits had not. The agricultural tech fit the system (horse shoes,
plows, etc) and made farming easier and better (did not change
social structure); in southern Europe, 2 field system continued
because of rainfall and 3 field system prevailed in North because
of climate
• When we look into the social structure of Europe during this
period, we look into deep time; social structure rathered stability
over change
• Peasant farming, serfdom, share cropping, village admin and
structure may be thought of as the ocean and the intellectual (or
urban) life; basic social structure of Europe remained through the
renaissance as it had in Rome
• In northern Europe, the percentage of people living in the country
was about 85%-90%; 75% in the Rhine Valley; a lot of towns
mainly in Italy
• It Italy, there were urban civilizations before Rome
• Civitas- cities were called this and citizens were civas
• Urban life wasn’t much different from urban Rome life
• People in the town were citizens of the town (enjoyed privileges in
law, market, and court in 1500 just as 100); towns were fairly
small...largest were in Italy (Venice, Milan, Florence) Even “large”
towns were about the size of Denham Springs 30-50000 people
• Continuity outweighed change
• European social structure is essentially traditional, pre-technology,
preindustrial and therefore extremely poor
• “Recycling”- wolves ate dead/dying people
• There was very little change; in the majority of places, continuity
outweighs change
• Urbanization- there were more and larger towns in Italy than other
places
• Virtually all of the nobility lived in towns; in Italy, people lived in
towns and the urban term was plazo (palace; some are still in
existence) Italy is urbanized and this produced a decisive
difference between Italy and the north
Unlock document

• Urban life was different from country life; in town, there was a
premium of social skills, literacy, and proper and easy familiarity
with language in all forms (speak, read, and write well); being born
in the countryside: accent, other skills were hard to develop
• John Colet: had been to Italy and brought books back with him
• Italy is the center of tech in the Renaissance; they go looking to
learn and return with knowledge and books to the north
• In 1445, Johanna Gutenburg(?) made the movable type
• Aldein Press in Venice published all kinds of classics and invented
paperback books
1/23/14
Renaissance Attitudes: Humanism and Religion
• Renaissance: French term meaning “rebirth”; rebirth primarily of
classical knowledge (and text) and classical aesthetic taste
(preference for classical rather than medieval Latin, new biblical
translations, etc)
• At the time, people talked about the “new knowledge”;
Renaissance was a term applied later
• Humanism: was a job (if you fully understood classical Latin, there
were diplomatic jobs available to you, etc. ambassadors,
chancellors; Machiavelli). Ambassadors of these days wrote
letters and speeches.
• First school of Greek was established in Florence
• Knowledge was being transferred to the west
• 1440’s- humanist Veltre produced for a court of Mantua; produced
a curriculum of the liberal arts (is still taught)
• Hegus- ridiculous, crazy
• 1291- Vivaldi brothers: tried to find out how big the earth was and
never returned
• Humanism is an attitude- a change in taste, a shift in emphasis
and focus; switch from a godly spectrum to focusing on people
(hence the name humanism)
• 1430-1450: period in which the Renaissance took a huge leap
forward; books really took off
• 1480: Ficino published his study of Plato- produced an astonishing
and scary conclusion → Plato was not a Christian or a precursor to
Christianity; was intellectually a bombshell
Unlock document