zz 1/20/12
Resources- something that can be used for support or help
Natural resource- something found in nature that is neseccary or uWWseful to humans
RNR- something that is neseccary or useful to huans that is replenished by nature-based
processes
Conservation- Aldo Leopold (1887-1946)
first person to talk about convervation and what it means
“a state of harmony between men and land”
came up with land ethic- existence of an ecological conscience..individual responsibility
for the health of the land
came up with sustainability- key concept for RNR use
rate or method of resource use does not impair future resource quality or quantity
think of the accured interest in a savings account
metaphor of using a savings account with interest and using that extra dollar in interest..if
you take too much, all of your savings will be depleted
a focus on future generations is implicit in the concept of sustainability, whether it is a
product (wood) or a function (wetlands)
regarding resource use, the precautionary principle is important for: any action that may
causer enviro. Harm, the burden of proof that is not harmful should fall on those taking
the action
professor at University of Wisconsin
Wrote The Land Ethic in 1949, mostly in response to Forest Service policies that favored
harvesting in national forests
considered three phases in the development in human ethics: 1. Relationships among
individuals 2. Individuals and society 3. The individuals relationship to land and nature
Sustainibility
CBB (convention on biological diversity)- binding treaty signed by 193 nations in 1992
typically associated with productivity of resources, but should also focus on maintaining
function
History of conservation
growth of human civil. Throughout history means increased use of NR
sustainability has declined as technological innovations have evolved
combined w/ increased technology, the expanding human pop. Has seen a tremendous
increase in our ecological footprint which means NR problems
The Industrial Age (late 1700s) 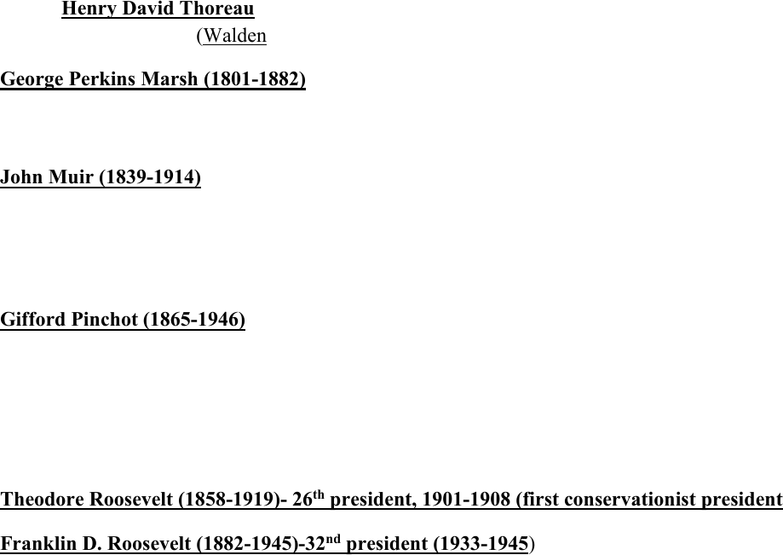 Steam engine in the late 18th century, gas engine in the late 19th century
haven’t thought of consequences (cons) just thought of the pros
small scale production by hand turned into large scale production by machine
use of fossil fuels and hydropower resulted in pervasive pollution, degradation of forests,
water, and land to support industry and growing urban centers, and loss of biodiversity
people move to cities which adds to all these negative effects
lack of concern because small human pop. At this time; perception of infinite resources
and resilience of nature; focus on economy and production of goods
The Industrial Revolution began in US around 1820, and although conservation would
not be recognized as a discipline for 140 years, many naturists were writing about conservation
issues by 1850
Since the mid-1800s, the US has produced many naturalists who have written extensively
about the effects of American expansion and industrilazation on nature
Henry David Thoreau (1817-1862)
naturalist writer (Walden) wrote extensively about how the world works
George Perkins Marsh (1801-1882)
scientist and congressman from Vermont (Man and Nature, 1864)
natural laws and harmony; humans cause “disturbed harmonies”
John Muir (1839-1914)
Founder of the Sierra Club in 1892
wrote about environmental destruction from development in CA
*all 3 wrote about problems that they see with industrialization
Gifford Pinchot (1865-1946)
first chief of the Forest Service (1905-1910)
beginning of the modern conservation movement in the US- using nature without
destroying it-“wise use”, not preservation
much experience with western forest speculators and forest dsestruction in the late 1800s;
“the greatest good of the greatest number in the long run”
Theodore Roosevelt (1858-1919)- 26th president, 1901-1908 (first conservationist president
Franklin D. Roosevelt (1882-1945)-32nd president (1933-1945)
creation of the Tenessee Valley Authority (TVA) |
dams on the TN river for employment, but also power, reduced forest fires, erosion, and

flood damage, and improved navigation and recreation
also the Civilian Conservation Corps (CCC)- response to the GP, allowed workers to
make a small salary while planting trees, developing parks, and rec area, dredging rivers
not strictly conservation (removing of dead trees from forests bc they look bad), but it
promoted a “receptiveness” for conservation. Made us think about maybe we should do
something
1/23/12
Conservation in the US
19th and 20th centuries in the US were characterized by frontier ethics, emphasizing
resource extraction and exploitation, with economic expansion of highest priority
Forests cleared, grasslands converted to agriculture, rivers dammed for hydroelectric
power generation, irrigation diversion, flood reduction, and municipal water supplies
Colorado River- more than 40 dams and diversions- loss of riverine habitat and endemic
species; reduced water quantity; continued immigration of people to the desert; loses from
inefficient diversions; 20% loss from reservoir evaporation; essentially no flow of water to
Mexico; reduced quality; irrigation leads to salinization; built de-salting plant in Yuma; septic
tank leakage into groundwater leads to nitrates; perchlorate- missile fuel installation in
Henderson, NV; radioactive mill waste from defunct facility near Moab, Utah- 110,000 gallons
of radioactive groundwater into the river each day; supplies water for 25 million people; invasion
of the quagga mussel (40,000/msquared) unsure how they got there
Agriculture and grassland conversion conversion accompanied conquest of the frontier
Switched from organic to inorganic fertiliziers means runoff and non-point source pollution
Grassland soils dependent on cover, altered function when converted to row crops
tall-grass prairies, more rainfall, mostly gone to agriculture
short-grass prairies, little rainfall, drought common, agriculture not sustainable
The Dust Bowl-drought between 1926-1934, poor farming of marginal land
9 million acres of topsoil lost to wind-driven erosion, 80 million acres damaged
a “natural disaster”, poor land use planning and a focus on short term power over
sustainability?
Industrial, agricultural technological developments continued during the 20th century
realization by the 50s that increasing productivity means greater environmental impacts