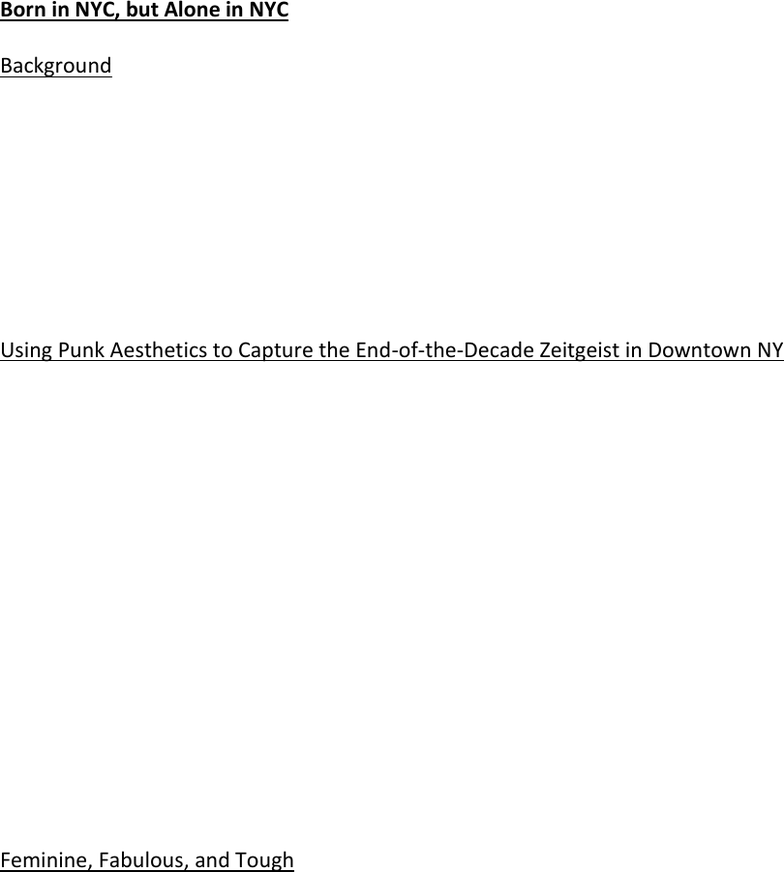 IAH Notes 2/18
Born in NYC, but Alone in NYC
Background
-he and Acker start performing at a live sex show called Fun City in Times Square. They take the
subway to and from work and perform in 6 shows, twenty or thirty minutes at a time
-Kathy Acker’s grandmother is important in the text
-She is 23 and her boyfriend Leu is 28
Using Punk Aesthetics to Capture the End-of-the-Decade Zeitgeist in Downtown NY
-google more about what punk aesthetics and zeitgeist are
-Janey is a woman who has been sexually hurt until she’s frigid (she probably represents the
average straight girl in the 1970s in America and she is used to represent that)
-she meets johnny, a man who wants to keep everyone and everything
-they go back to her place and have sex
-“speaking for nearly every straight girl in the late 1970s America, Acker concludes the story: ‘At
the door of Janey’s apartment Johhny’s telling Janey he’s going to call her. Johnny walks out the
door and doesn’t see Janey again.” (Krauss 171).
Feminine, Fabulous, and Tough
-“NYC in 1979 records a wonderful confluence between Acker’s hard-won fragmented, but
sharp sensibility and her environment. By now a principle plater actor (a somebody)in NY’s
downtown scene, Acker feeds the scene back to itself, aware that she’s both a protagonist and
a chronicler of the art world’s weird chamber drama. Transporting emotion and sex from the
Unlock document

realm of the female-abject, she proposes a new universal that is…feminine, fabulous, and
tough” (Krauss 172).
The Whores in Jail at Night
-this section of NYC in 1979 is based on an actual night Acker spent in jail
-Acker (23) and Len Neufeld (her boyfriend, 28) were performing on of their skits at Fun City.
The police arrested them for public lewdness, and they were booked, finger printed, and
interviewed by a young cop (Krauss 59_
-the charge was eventually dismissed with a fine paid by club owner
-Acker wrote about this event in her diary and incorporates it into another 1983 novel, Great
Expectations
-her biographer describes her time in NYC with Neufeld as a fable; a young women’s descent
into an endless vortex of exploitation and poverty
-Acker met Neufeld in 1969 in a poetry class, they knew each other in San diego, then both
moved to NY together bc they wanted to be writers/authors but they had no parents, no
friends, no money, nothing there in NYC except each other and the hope for becoming authors
Minimum Wage was $1.85 in NYC
-minimum wage was $1.85 and that was so low that Acker and Neufeld needed to make more
money and they would make $100 a day doing the sex shows so they did that instead to make
more money
-Acker got PID (pelvic inflammatory disease) which was really painful and she couldn’t afford
the treatment to get her help so she kept doing the sex work to make $ for her treatment and
then would go back into an endless cycle of doing the sex work but it caused her much pain
Unlock document

-eventually her and Neufeld stopped the sex work and filed for unemployment (double check
that)
She was a Poet
-she mostly started writing in her unpublished diaries
-although her “poems 5/71-6/71 contained no actual poetry, she was a poet, in the sense of the
word as she and her friends understood it” (Krauss 60)
-“On May 7, 1971 Acker read at the St. Mark’s Poetry Project open-mike evening. It was the first
time she had read in NYC and she went home ecstatic (Krauss 61)
-The location in St. Marks where Acker is reading her poetry in 1971 is also a place where
filmmaker Vivienne Dick also exhibits her films, such as She Had Her Gun All Ready, in 1978
Acker’s Grandma
-Acker was estranged (google that word) from her family, including her grandmother
-in the fall of 1979 while Acker was probably still in Paris, her grandmother dies in NY
-Acker and her grandmother’s relationship “had always been a confusing mix of disapproval and
sincere respect. The 3rd daughter of Austrian immigrants who owned a York Avenue Butcher
shop, (her grandma) Florence was known as the most driven, astute, and financially ambitions
member of her extended clan. Like kathy’s mom, Hortense, she married well. Florence’s
husband, Alexander Weill….”
-Kathy’s grandma disapproved of her choices but still admired her hard work and
accomplishments
A Parody of Grandma
Unlock document