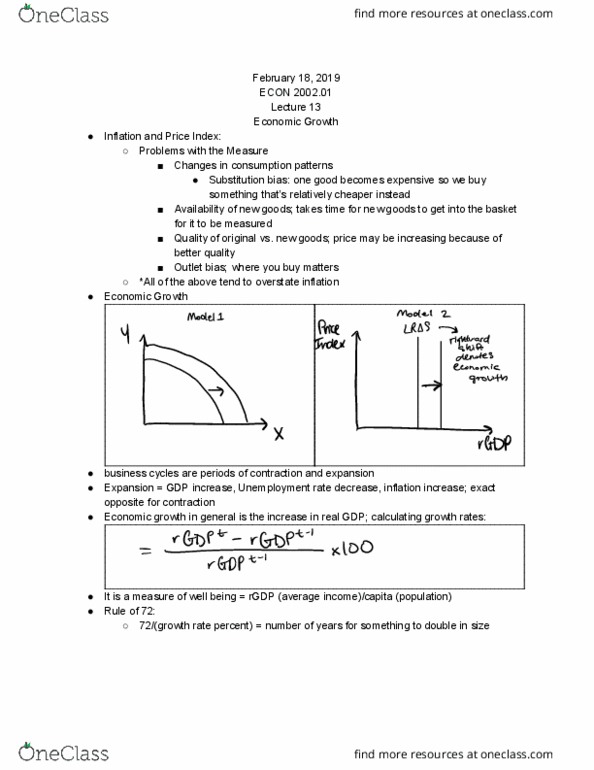 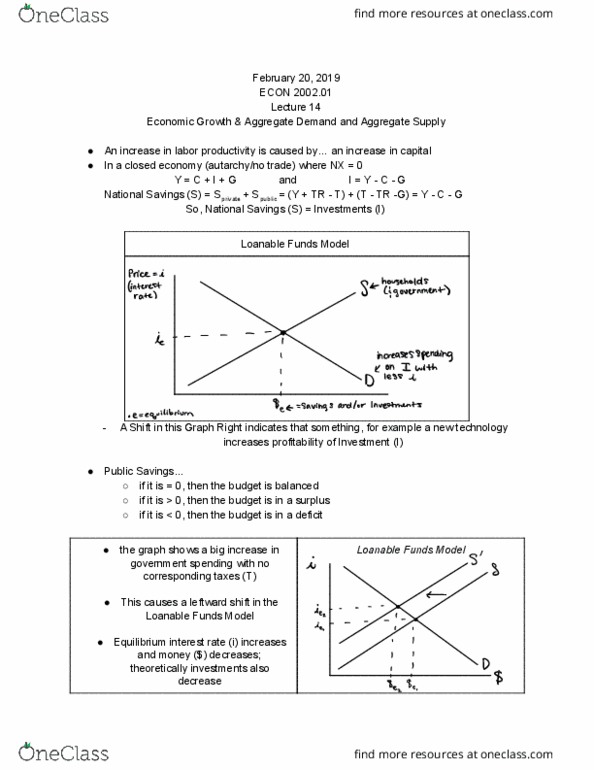 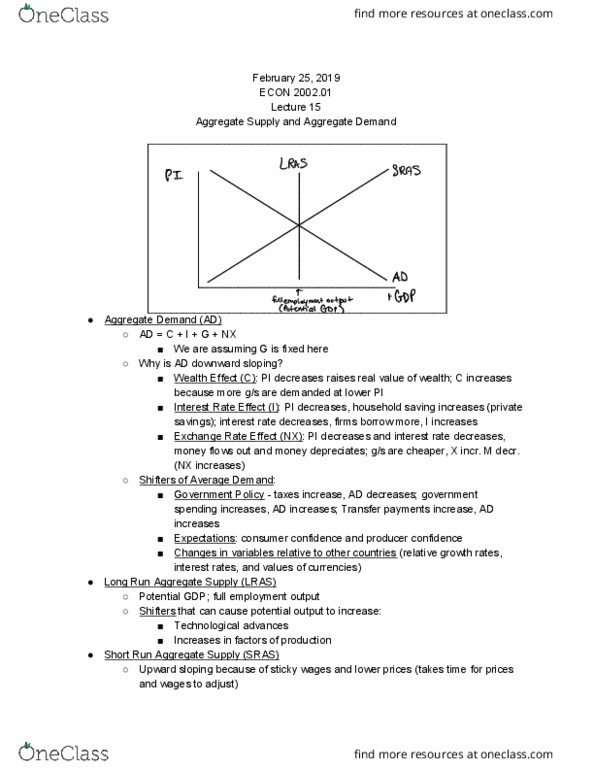 Economic growth & aggregate demand and aggregate supply. An increase in labor productivity is caused by an increase in capital. In a closed economy (autarchy/no trade) where nx = 0. Y = c + i + g and. National savings (s) = s private + s public = (y + tr - t) + (t - tr -g) = y - c - g. A shift in this graph right indicates that something, for example a new technology increases profitability of investment (i) If it is = 0, then the budget is balanced. If it is > 0, then the budget is in a surplus. If it is < 0, then the budget is in a deficit. The graph shows a big increase in government spending with no corresponding taxes (t) This causes a leftward shift in the. Equilibrium interest rate (i) increases and money ($) decreases; theoretically investments also decrease. I r l i l i ez e.

41.Which of the following is a valid statement about the Keynesian and classical models of the macroeconomy?

A. Fiscal policy will affect output in the Keynesian model, but only the price level in the classical model.

B. The economy adapts quickly to demand shocks under the Keynesian model, but not under the classical model.

C. A sharp decrease in the value of a nation's currency will lead to higher price levels in the Keynesian model, but not in the classical model.

D. Increases in autonomous expenditure will increase aggregate demand in the Keynesian model, but not in the classical model.

E. An increase in the productive capacity of an economy will result in greater output in both the Keynesian and classical models.

42. Suppose the government spends $500M on a project that has absolutely no value to the country. Which statement about this project is correct?

A. If taxes were raised $500M to fund this project, the Keynesian model predicts that this will have no net effect on output in the economy.

B. If the government raised the money for this project by printing $500M in bonds and selling them to the Fed, the effect is exactly the same as if they sold the bonds to households.

D. If the marginal propensity to save in the economy is equal to 0.25, the Keynesian model predicts that this project will result in a $2000M increase in GDP.

E. Under the assumptions of the classical model, the result of this project will be increased in both the price level and equilibrium GDP.

A. If the investment is zero, there is no foreign trade imbalance.

C. If the capital account surplus is $50M, the investment will be equal to $100M.

D. If the trade surplus is $100M, there will be an investment.

E. None of the above statements is necessarily true.

44. Which piece of information would be least useful in trying to predict the effect of a $700M increase in government spending on equilibrium GDP?

A. marginal propensity to save

B. The slope of the aggregate supply curve

C. Whether taxes are raised to pay for the spending increase

E. Whether the bonds used to finance the spending were sold to households or to the Fed

45.Which of the statements relating to full employment and full capacity is false?

E. In the long run, an economy that starts at full capacity will move to full employment.

46. What would be the effect of a law requiring that government spending equal tax revenues in each year?

A. Fiscal policy would be completely eliminated as a tool to control the macroeconomy.

B. Monetary policy would be completely eliminated as a tool to control the macroeconomy.

D. The government spending multiplier would be effectively set to 1.0.

E. The marginal propensity to consume would be cut in half.

47.The total value of T-bonds, including T-notes and T-bills, in existence at any point in time, is:

A. The federal government spending deficit.

B. The trade deficit.

48. Which of the following would be a valid statement about a government plan to eliminate a trade deficit

A. A decrease in the trade deficit will decrease investment in the country.

B. An effective strategy would be to increase the money supply and increase the value of the national currency.

C. An effective strategy would be to increase interest rates and increase the value of the national currency.

D. This could be achieved through dramatically increasing aggregate supply.

E. The increase in net exports will result in a decrease in aggregate demand.

A. Reducing the effectiveness of monetary policy if crowding out occurs in financial markets.

B. Decreasing the value of a nationâs currency if the crowding out occurs in financial markets.

E. Increasing the price of government bonds if the crowding out occurs in financial markets.

50. Which of the following will make crowding out in credit markets more severe?

A. A steep investment demand curve

B. A global credit market

D. A steep supply curve in the loanable funds market

E. None of the above

Please help wtih these economics questions. I'll give the best answer to the person who justifies their answer.. or someone who does well in economics and knows the subject area well.

Which of the following statements is not true about Say's Law?

A. People produce more goods than they want for their own use only if they seek to trade them for other goods.

B. Markets would be regularly hit by severe shortages and surpluses.

Which of the following is not an assumption of the classical model?

A. Buyers and sellers react to changes in relative prices.

B. Households want to maximize economic well being.

D. No single buyer or seller of a commodity can affect its price.

A. when people think they are better off when their income increases even though prices have increased by the same amount.

B. when people are motivated by self-interest.

C. could not exist if the economy did not have competitive markets.

D. a basic condition that all classical economists assume people have.

Saving is not a problem in the classical model because

A. interest rates were flexible and savings were channeled into investment.

B. savers and investors were the same people.

C. the classical economists assumed that saving was beneficial to people for retirement.

D. saving would be spent by consumers eventually.

Which of the following statements is true?

A. There is an inverse relationship between investment and the interest rate.

B. There is no relationship between investment and the interest rate.

C. There is a direct relationship between investment and the interest rate.

In the classical model, high unemployment due to either a demand or a supply shock

A. will return to its normal level quickly as wages adjust.

C. can persist for an indefinite period of time.

D. never exists because unemployment can never deviate from its normal level.

A. the model has not been fully developed yet.

B. prices adjust so fast that the economy is quickly moving towards the long-run.

C. the classical economists knew that we are always operating in the short run.

D. current changes influence the long run, so it is not possible to plan for the future.

In the classical model

B. the level of GDP is demand determined.

C. the level of GDP determines prices independent of demand.

Which of the following is a true statement?

Which of the following is not a reason why GDP can be expanded beyond a level consistent with its long-run growth path in modern Keynesian analysis?

A. Prices and wages are flexible allowing for needed adjustments.

B. In the short-run existing workers can work more hours.

C. The existing capital stock can be used more intensively.

A recessionary gap can be caused by

A. a decrease in aggregate supply holding aggregate demand constant.

B. an increase in aggregate demand holding aggregate supply constant.

D. a decrease in both aggregate demand and aggregate supply.